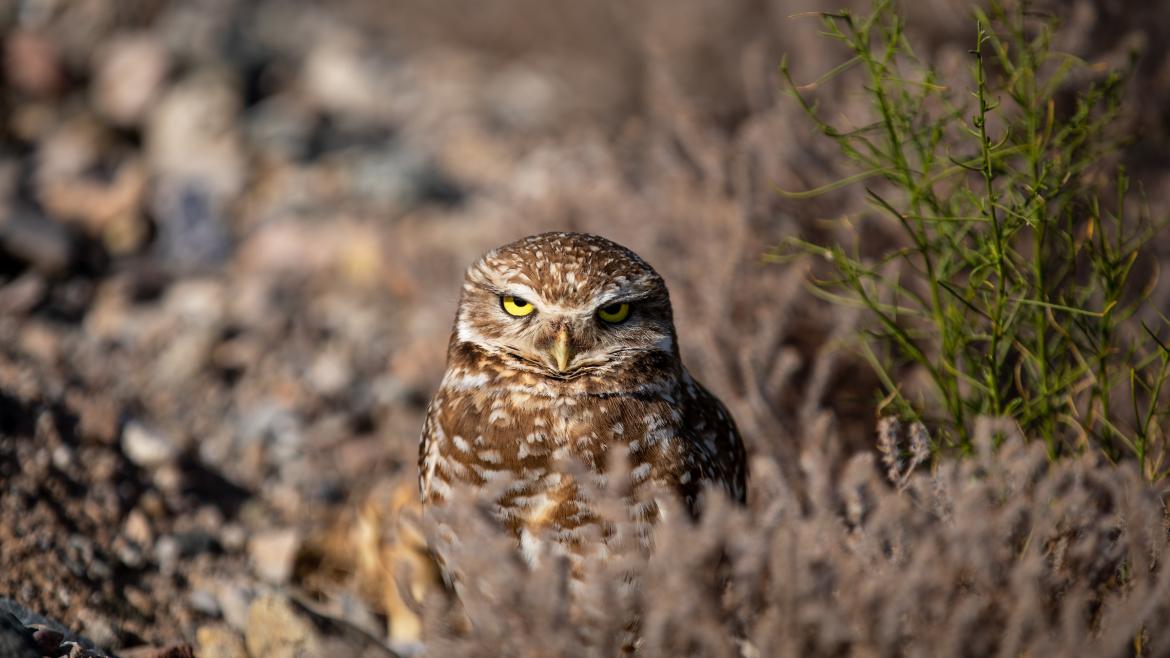 ASU biologist’s research is for the birds

The western burrowing owl is like no other bird: It lives underground, is adaptable to urban environments and its idea of a show of force is to surround its nest with dog waste and neighborhood trash.

These are just some of the nesting and habitat characteristics brought to light by Kerrie Anne Loyd, a wildlife biologist at Arizona State University at Lake Havasu.

The ongoing research, now in its sixth year, will fill in important gaps in knowledge about owl activity and population trends in human-dominated environments.

“I love birds, and my objective is to help people get along with wildlife,” said Loyd, whose work on domestic cats and wildlife has been highlighted on "NBC Nightly News," NPR’s "All Things Considered" and ABC’s "20/20." “By studying animals and helping to understand their habits, I can find what they need in order to thrive in human-dominated environments.” Kerrie Anne Loyd sets up a movement-triggered camera outside one of the burrowing owl habitats in Lake Havasu City on May 24. The urban/suburban ecologist is gathering data as part of her research on the owls funded in part by the Arizona Game and Fish Department. Photo by Charlie Leight/ASU Now

Loyd began studying the bird, which stands about 10 inches tall and has round, yellow eyes and long, skinny legs, in 2013. For decades their numbers were declining across western North America due to loss of natural habitat and lethal control of burrowing rodents. The birds shifted to more developed habitats such as agricultural areas, golf courses and undeveloped lots. In Lake Havasu City, they set up house in desert washes, using existing burrows created by ground squirrels and wood rats.

Because of their proximity to humans in Lake Havasu City, these raptorsA carnivorous medium- to large-size bird (such as a hawk, eagle, owl or vulture) that has a hooked beak and large sharp talons and that feeds wholly or chiefly on meat taken by hunting or on carrion. seem more naturally tolerant of people.

“They’re super charismatic because they’re cute, out during the day, easy to see and fun to watch,” Loyd said. “People in town have an interest in them and can get up close to them. The owls don’t find observant people a threat.”

However, Loyd said, if someone gets too close to a nest while the birds have babies, usually in May and June, they could feel the sting of a parent’s talons. Loyd herself has felt those at times, spending close to 20 hours a week conducting research at nest sites. 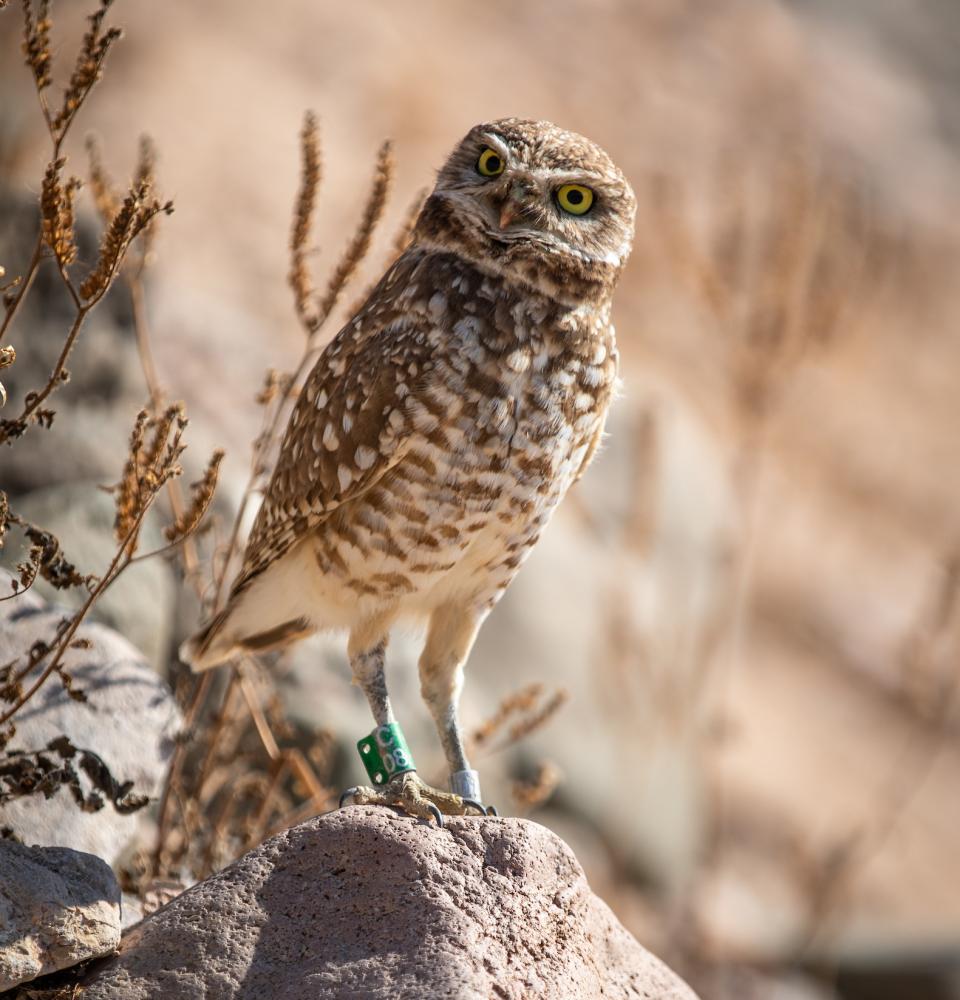 Loyd’s director said her research is important to the species, the city and the 6-year-old ASU location.

Loyd and a team of ASU students have monitored 136 active nests within the Lake Havasu City limits over a six-year period through the use of remote cameras and on-site fieldwork. Briana Morgan, a 2016 ASU graduate, worked alongside Loyd for three years.

“Through Kerrie Anne’s work, I truly learned the impact that humans have on wildlife and the environment,” said Morgan, who today is a water conservation specialist for Lake Havasu City. “The best word I would use to describe her is dedicated. She’s 100% dedicated to her research, and her passion influences her students without pushing it on them.” A movement-triggered camera outside of a burrowing owl habitat in Lake Havasu City helps to inform the research ASU biologist Kerrie Anne Loyd, who has been studying the raptor since 2013. Photo by Charlie Leight/ASU Now

One of her most important discoveries was that the primary cause of owl mortality in Lake Havasu City was due to increased use of pesticides in an attempt to remove mice, rats and ground squirrels. Loyd said that 24 owls in one year experienced secondary poisoning through consumption of rodents contaminated with rat poison. Dogs, cats and other birds can be unintended victims as well.

That particular finding led ASU, Arizona Game and Fish and Wild at Heart to support a combined “owl-friendly” educational campaign in Lake Havasu City. This included the distribution of 6,000 brochures and three permanent interpretive signs, asking community members and residents to be vigilant about use of rat poison and encourage other methods of pest control.

The western burrowing owl is listed as a species of conservation concern in Arizona and its numbers are declining, but the birds seem to be thriving in Lake Havasu City.

Much of the credit should go to Loyd, said an associate.

“Kerrie Anne’s research and her ability to convey that to the public has helped immensely with the owl population,” said Pam Smart, founder of Havasu Wildlife Rehabilitation, a nonprofit that helps wounded and abandoned animals. “Before Kerrie Anne came here, I don’t think the concern and the visibility of the owls was there. She’s helped a great deal in getting the word out.”

But there are some questions that Loyd doesn’t have the answer to. Like why do the male owls spend an inordinate amount of time and energy decorating their nests with dog waste, which can often attract predators like dogs, roadrunners and coyotes?

Loyd believes the male owl is simply marking his territory. 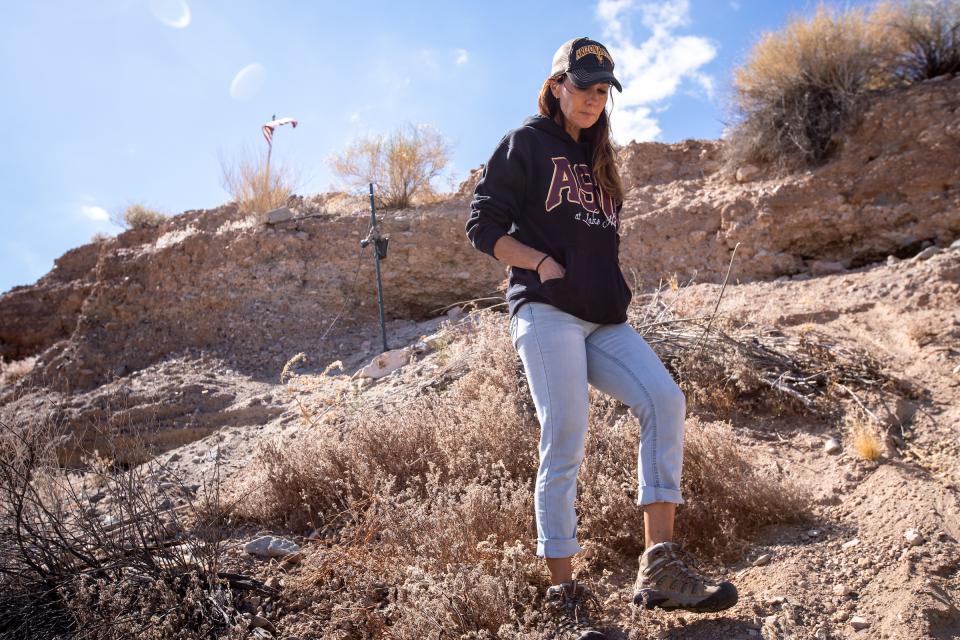 “The hypothesis is now that the owl is stating, ‘This spot is occupied. I’m the best bird in the neighborhood because look at all this energy I have to gather dog poop and trash to put around my nest!’” Loyd said.

The current phase of Loyd’s research, which will continue at least through 2020, is focused on dispersal distances of juvenile birds and behavior of adults at nest sites year to year. She will also continue to work on public education efforts to ensure long-term population growth.

“I’m so lucky to be able to study such an interesting species and involve so many students in conservation research right here in our small desert city,” Loyd said. “It’s been a fun project to do.”

ASU linguistics student explores the language of the disabled community

We all know the meaning of that blue decal with a stick figure person that hangs from rearview mirrors. What we probably don’t know is how to refer to the person it depicts.Are they a person in a wheelchair? A person who uses a wheelchair? Wheelchair-bound?ASU graduate student Adam Schmuki uses the latter to refer to himself, but he realizes there are some who find the term offensive. He gets it... 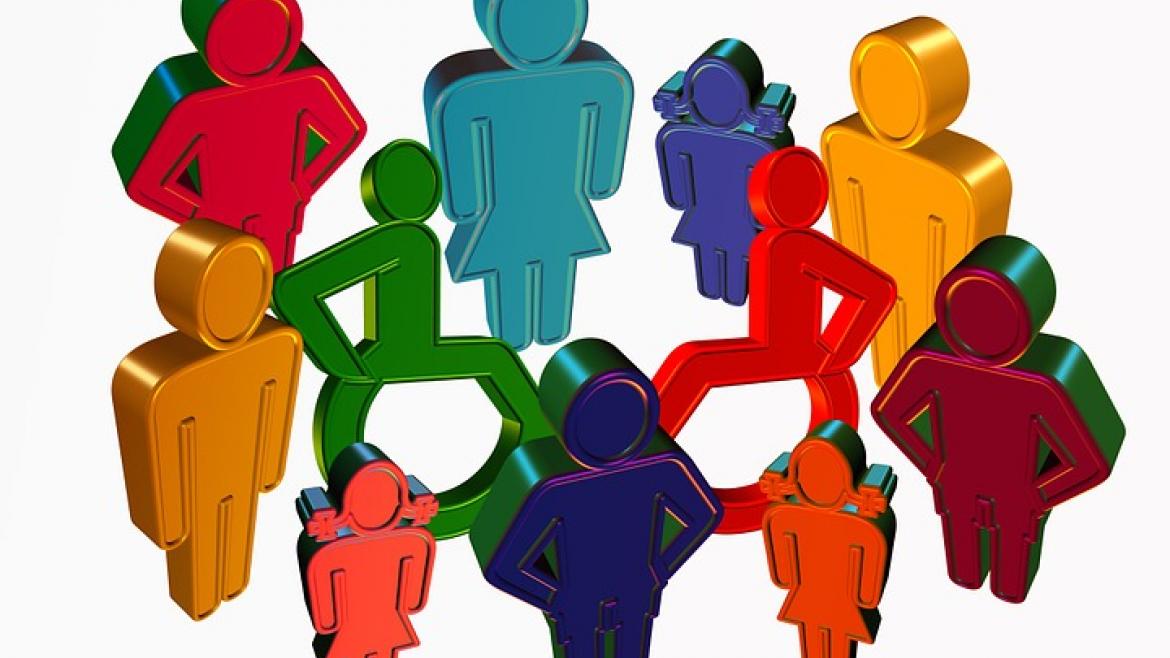 ASU linguistics student explores the language of the disabled community

We all know the meaning of that blue decal with a stick figure person that hangs from rearview mirrors. What we probably don’t know is how to refer to the person it depicts. 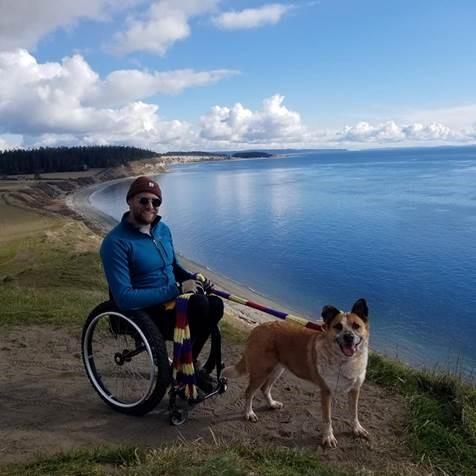 ASU graduate student Adam Schmuki and his dog out for a hike in Washington state. Photo courtesy Adam Schmuki

Now, as a linguistics and applied linguistics major, he’s using his unique perspective to explore the complexities of the language and narratives surrounding disability through the lens of Twitter.

An avid tweeter himself, Schmuki’s interest was piqued one day last semester when he came across the hashtag #AbledsAreWeird, which normalizes disability and presents a provocative counternarrative to the widely held societal notion that disabled individuals are the “others."

At the time, he was enrolled in Associate Professor of English Matthew Prior’s Linguistics 616 course, “Discourse in Pragmatics,” which looks at language in use. He proposed the idea of investigating the unique hashtag further as part of a class project, and Prior gave him the green light.

“I wanted to focus in on how people were defining themselves as disabled,” Schmuki said. “I also was looking at how they were defining their interactions with abled people. What was ‘abled’ to them — what made ‘abled’ weird to them?”

That Schmuki considers himself part of the disabled community is important, Prior noted: “One of the interesting things he's doing for this project is looking at labels and how people within the community themselves talk about these sorts of things, whereas so much of the research is very much from the outside looking in.”

Schmuki has compiled his findings into an abstract that he will be submitting to the American Association for Applied Linguistics in the hopes of presenting at their next annual conference in March 2020. But he’s not stopping there; throughout the course of his research, he has identified several further lines of inquiry he intends to examine as a doctoral student.

“As he digs deeper into this, what he's bringing to light is that the label ‘disability’ itself is highly complex and problematic,” Prior said. “What falls under the label ‘disability’? There are people who have visible disabilities, and there are people who have invisible disabilities, and sometimes it's hard for people to recognize, and I think one of the things he's showing is that this so-called ‘disabled community’ is actually filled with a whole bunch of different kinds of experiences and histories and backgrounds and people. He's sort of peeling away the layers to show just how complex this is.”

For instance, Schmuki was intrigued to learn that some people with cognitive disorders such as autism — as well as those experiencing depression, anxiety and chronic illnesses — considered themselves disabled. He was also disheartened to see the frequency with which discussions of suicide came up among the “Disabled Twitter” community.

Schmuki understands firsthand the frustrations and challenges that come with disability. As a middle and high school student, he spent much of his time in and out of hospitals for surgery, requiring him to miss school. The system only had one way to deal with the situation, which was to send him to remedial classes he had already mastered.

He and his parents fought tooth and nail and eventually obtained a tutor who was able to keep Schmuki on track to graduate with the rest of his classmates. He hopes some of what he is uncovering in his research might inform how schools approach teaching disabled students in the future.

“It’s about understanding that it's not 'disabled or not,' it's all sorts of things, and that our education system should be prepared for that,” Schmuki said.