"It all comes out in the wash" is proving to be a more accurate phrase than previously realized, and it may not be good news.

It seems that humans' cleaning habits are a major contributor to the growing problem of synthetic tidbits in the ocean. Unfortunately, most of us are unaware that we are part of the problem. 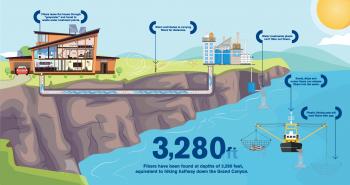 “Grey water” pouring from washing machines to water treatment plants contain a stew of microplastic particles. The plastic is ending up in rivers and oceans. Download Full Image

Researchers at Arizona State University are finding a particularly pervasive problem with the microplastics that originate from human everyday use. Rolf Halden, director of the Biodesign Center for Environmental Health Engineering and professor at ASU’s School of Sustainable Engineering and the Built Environment, and his team worked with the Monterey Bay Aquarium Research Institute (MBARI) to analyze oceanic samples collected from vast vertical depths of seawater by the MBARI team.

The results were published June 6 in a Scientific Reports journal article titled, "The vertical distribution and biological transport of marine microplastics across the epipelagic and mesopelagic water column."

The research sought to discover how far down the oceanic water column microplastic pollution could be found. Plastic that is less than 5 millimeters in length — the diameter of a pencil eraser — or smaller is considered “micro.” The study was approached in two distinct phases. The first phase analyzed tiny particulates collected by MBARI submarine robots within California’s Monterey Bay and the Monterey Canyon, an underwater canyon that is equal in depth to Arizona’s Grand Canyon. This was the first time researchers were able to compare plastic filtered from waters all the way down to 1,000 meters (3,280 feet) below sea level. The second phase focused on filtering the stomach contents of crabs and larvaceans (a free-swimming marine invertebrate) within the same areas to see if the problem also affected the animals.

Charles Rolsky, a member of the Halden lab and a PhD student in the ASU School of Life Sciences, developed a technique for the separation and screening of the microplastic samples for the hundreds and hundreds of samples collected. Rolsky spent the greater part of eight months tediously separating the tiny microbits under a microscope, and then screening them with Raman spectroscopy to determine which pieces were natural and which were synthetic plastics. This type of spectroscopy provides a sophisticated energy signal that can be thought of as a molecular fingerprint. Armed with a databank of these spectroscopic identifiers, the researchers were able to determine the amount of microplastics in the ocean depths, and confirmed that the plastic infestation did not spare the local wildlife.

Discovering this level of oceanic pollution was alarming, researchers said. It conclusively found that an uninterrupted distribution of microplastics spanned the entire depth of the water column studied. The microplastics were most concentrated 200-600 meters (656-1,968 feet) below the water’s surface. The plastics remained in the digestive systems of animals that ingested the water — including sea life that could end up on a dinner plate. The spectroscopic analysis also confirmed that these microplastics most likely originated from products manufactured by humans. The weathered condition of the tousled microplastics further indicated that most particles had made a long journey before settling into the bay. Overall, the study emphasized how big this “micro” issue really is.

Our actions have consequences

Perhaps the information of greatest concern was that the majority of the microplastics that Rolsky analyzed contained plastics that are resistant to further breakdown. PET (polyethylene terephthalate) products make up the largest population of these plastics. PET is a synthetic polymer, and PET plastics are well known for crowding the macro world within the Great Pacific Garbage Patch found in the middle of the ocean. And it seems the micro PETs are drowning oceanic waters in plastics as well. This level of plastic pollution is becoming increasingly challenging for the planet’s animals and plants. Unfortunately, public awareness is not on par with the problem, researchers said.

“This situation is a testament to out-of-sight, out-of-mind,” Rolsky said. “Just because something leaves your house, doesn’t mean it no longer exists. The plastic is ending up in our rivers and oceans. It is important that we consider this on a daily basis.”

What most people don’t realize is that more than one-third of oceanic microplastics originate from plastic-laden synthetic fabrics. Polyester and acrylic fabrics aggressively shed microplastic fibers during washing machine cycles. If you washed just 1 pound of synthetic material (less than the weight of the clothes on your back) in a typical warm wash cycle, expect to shed an average 46,000 fibersThe estimate for microfiber shedding is based on an averaging a 1-to-1 mixture acrylic and polyester materials.. This means that the “grey water” pouring from washing machines to water treatment plants contain a stew of microplastic particles.

“We are still unsure as to the total effects of microplastics,” Rolsky said. “However, this study has made it clear that the issue is far bigger than previously anticipated. It is imperative that we take action. We need to consider the way we manufacture, buy and use plastics — and what we choose to wear and wash.”

Although wastewater treatment plants are good, they are ill-equipped to destroy nonbiodegradable microplastics. The particles exit in both treated water and the treatment byproduct, called sewage sludge. Therefore, the microbits that are captured by the treatment plant are redirected into rivers, lakes and oceans as reclaimed water and into agricultural soils since the sewage sludge is applied on land for its disposal.

Halden concludes that people are the real solution.

“The important thing, I believe, is that pollution is not caused by someone else. It is caused by us,” Halden said. “We have gotten so used to the plastics that we don't consider any more that these are failed materials. They have let us down. They are making us sick, and they destroy the aquatic and terrestrial ecosystems that humans rely upon for sustenance. So we really need to change our behavior. Since manufacturers don’t pay for the pollution, they have little incentive to change the status quo. Thus, it is up to us individually to take the rudder and steer clear of producing more plastic pollution that ultimately will find its way into the environment and into our bodies."

Maureen van Dobben, Amy Rodriguez and Jordan Neel released a mobile application this week — one month after they all graduated with degrees in digital culture from Arizona State University's School of Arts, Media and Engineering. LeARn is an educational app that uses augmented reality, and the team credits their success so far to opportunities ASU gave them to develop the app, including $3,000 i...

Maureen van Dobben, Amy Rodriguez and Jordan Neel released a mobile application this week — one month after they all graduated with degrees in digital culture from Arizona State University's School of Arts, Media and Engineering.

LeARn is an educational app that uses augmented reality, and the team credits their success so far to opportunities ASU gave them to develop the app, including $3,000 in funding. 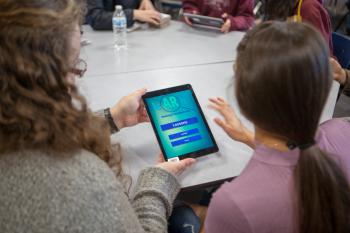 “We wanted to create this app because we all felt there are lots of interesting ways to use augmented reality in education specifically,” van Dobben said. “It's a really interesting field that is still emerging. Our mixed-reality project integrates augmented reality into the classroom to help young learners master fractions. In this instance, augmented reality helps students understand complex abstract concepts by creating a connection between the numerical form of the fraction and what that number actually represents.”

The team, along with fellow digital culture alum Ryan Black, spent the last year working on the app, which they first demonstrated in December 2018 as part of Arts, Media and Engineering’s Digital Culture Showcase that fall.

“It was the first time we demoed the project outside of our own team,” van Dobben said. “We received really useful feedback about usability, our design and even the practicality of this app.”

The team also competed in the yearlong ASU Research Enterprise’s Virtual Reality Innovation Challenge. After making it to the final round, they received $3,000 toward an equipment budget to finish developing the app.

“The ASURE funding was incredibly helpful for our development,” van Dobben said. “With it, we were able to purchase supplementary tools like a MacBook Pro, an iPad and an Android tablet.”

For the VR Innovation Challenge, participants submitted proposals to develop a use case into a novel and innovative system that utilizes virtual, cinematic, augmented or mixed reality to address and solve a real world problem. Through the course of the challenge, the team collaborated with Betsy Fowler and Leslie Easton of ASU Prep Digital to test the app with sixth, seventh and eight grade students at Garden Lakes Elementary School. According to their study, the students unanimously loved the app, mostly due to its engagement in being able to flip between different symbol representations.

All the finalists showcased their projects in April. The team said they received a lot of positive feedback, including from several people who already want them to expand beyond fractions to trigonometry.

The app is now available on the GooglePlay store.