Arizona State University's Center for the Study of Religion and Conflict has named Tracy Fessenden as the first director of strategic initiatives.

Fessenden is a professor of religious studies for the School of Historical, Philosophical and Religious Studies and spent the last academic year as the school’s interim director. 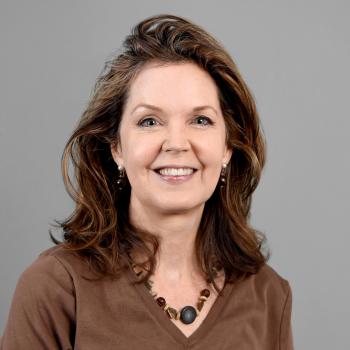 Tracy Fessenden has been named the first director of strategic initiatives for the Center for the Study of Religion and Conflict. Download Full Image

“I’ve been treasuring up the news of this move for some time,” Fessenden said. “I’m delighted that it’s now official. The colleagues I’ll be joining at the CSRC are among those I most esteem in the world. Moving to the CSRC feels like coming home.”

“President Crow understood that in order to see and respond meaningfully to the ways that religious symbols, language and allegiances drive change in the world, for good and for ill, we need to be fearless about thinking big,” Fessenden said. “We need to gather resources and expertise from across the disciplines, the professions and the institutions of civil society and bring them to bear on questions the academy has seldom sought to engage.”

The director of strategic initiatives role was created to help the center branch out into new endeavors. Fessenden will be involved in leading new research initiatives, expanding academic and community partnerships and creating a program of workshops, panels, seminars and internships with visiting scholars.

Fessenden already has her hand in a number of projects affiliated with the center and will join more once she starts. One project she is excited to begin includes a new class on religion and media, which will be co-taught with Fernanda Santos, a professor at the Walter Cronkite School of Journalism and Mass Communication, author and former Phoenix bureau chief for the New York Times.

“I’m thrilled to be teaching with Fernanda,” Fessenden said. “It’s a collaboration that grew out of a recent CSRC project of which we’re both a part, an initiative funded by the Henry Luce Foundation called Religion, Journalism and Democracy: Strengthening Vital Institutions of Civil Society.”

“John Carlson and the CSRC’s assistant director, Carolyn Forbes, have begun planning a series of conversations on the rise of violence and terror aimed at synagogues, churches and mosques, and John, Carolyn and I have been working for the last year and a half on a major, multidisciplinary collaborative on the task of caring for truth in a post-truth era,” Fessenden said.

Carlson is the current director of the Center for the Study of Religion and Conflict and originally approached Fessenden in fall 2018 about moving her activities to the center.

“We are so thrilled to have Tracy join us at the center,” Carlson said. “We were looking for a senior faculty member and recognized scholar in the field of Tracy’s stature to take on the position.”

Her role in the center will officially begin on Aug. 16 with the start of the new school year.

“I want to expand and deepen the conversations these projects helped to nurture,” Fessenden said. “I’m also eager to make the CSRC a forum for the most important voices, at and beyond ASU, on religion and the rise of authoritarian and nationalist movements the world over.”

Have you been 'zombified'?

Athena Aktipis wants brains. Not because she’s a zombie but because she’s been zombi-fied. And so have you.By social media. By stress. By your friends. Even by loyal old Fido. And the only cure is to bring as many brains from as many fields possible together to get a handle on how and why those noodley masses of muscle and synapses can be manipulated by forces seemingly beyond our control.That... Have you been 'zombified'?

Stress, social media and even man's best friend can "zombify" us.
Zombie narrative provides a lens for a deeper understanding of complex issues.
June 7, 2019

In new podcast, ASU psychology professor asks us to take a deeper look at the forces which seek to control us

By social media. By stress. By your friends. Even by loyal old Fido. And the only cure is to bring as many brains from as many fields possible together to get a handle on how and why those noodley masses of muscle and synapses can be manipulated by forces seemingly beyond our control.

That’s the premise of the Arizona State University psychology professor’s new podcast, “Zombified,” an educational exploration of how we are vulnerable to being “hijacked” by everything from parasites to monstrous algorithms, featuring informal conversations between Aktipis, her co-host David Lundberg-Kenrick and scholars from ASU and beyond.

“Things will evolve to manipulate other things if they can benefit from it,” Aktipis said. “That's why you see all these bizarre things like parasites manipulating host behavior. And we're kind of at this really interesting inflection point where we have, as humans, set in motion a whole other evolutionary process for zombification and manipulation without quite realizing that we've done it; we've set these monster algorithms into motion that are evolving to manipulate us.

“So that's kind of the scope of this podcast. All the way from parasites and infectious diseases to why do you keep picking up your phone.”

“Zombified” premiered Tuesday, June 11, with a launch event that took place at 1 p.m. in the Psychology Building, room 230, on the Tempe campus. The event included a livestream of the first episode and a discussion with that episode’s guest, ASU psychology Professor and dog expert Clive Wynne. 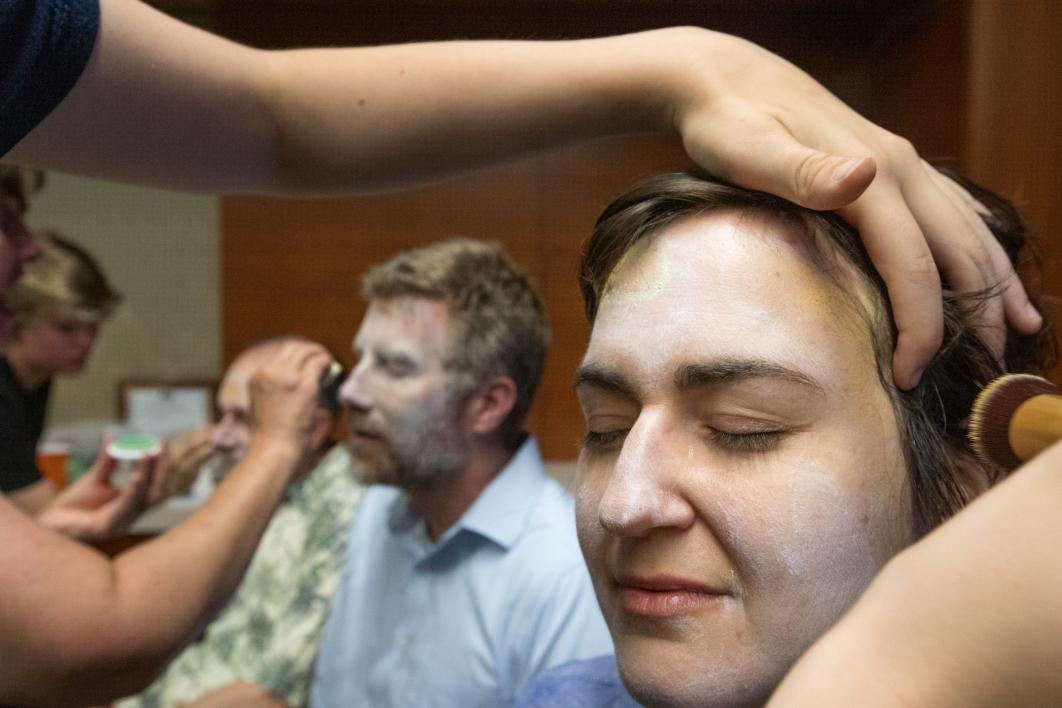 "Zombified" host ASU psychology Assistand Professor Athena Aktipis (right), co-host Dave Lundberg-Kenrick and guest Professor Clive Wynne get made up before their live podcast recording on Tuesday, June 11. The podcast explores how humans can become "zombified" by any number of things. 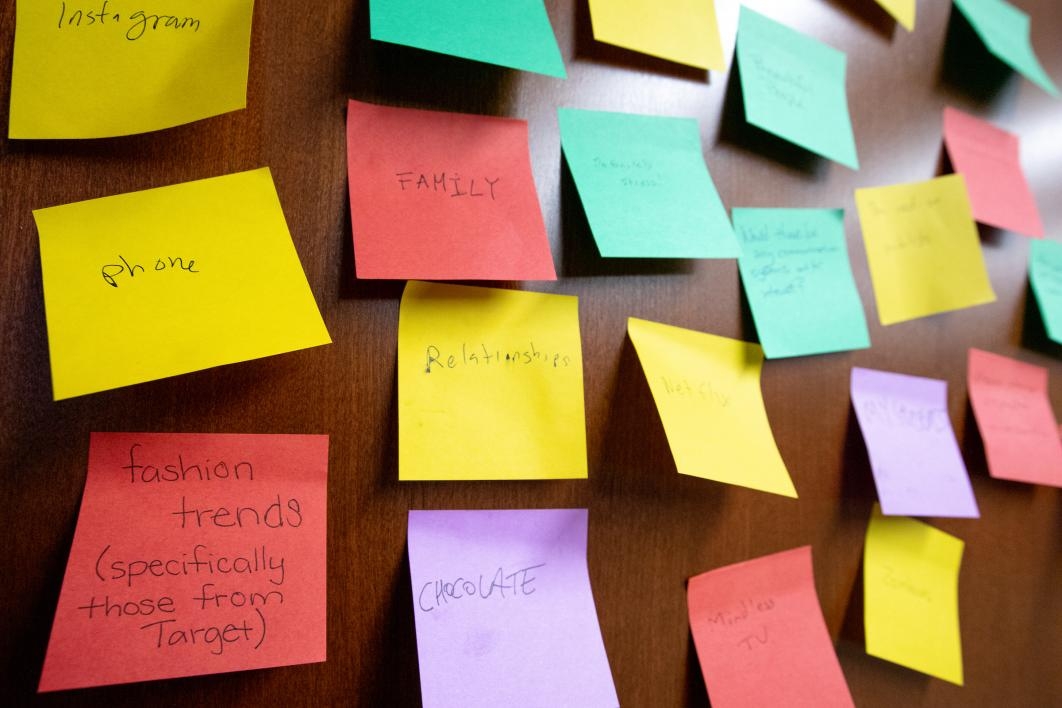 Audience members were invited to post what "zombifies" them before the "Zombified" live podcast recording with ASU psychology Assistant Professor Athena Aktipis and co-host Dave Lundberg-Kenrick. ASU psychology Assistant Professor Athena Aktipis and co-host Dave Lundberg-Kenrick talk about upcoming shows on the "Zombified" podcast. The podcast will explore what "zombifies" us: From microbes hijacking behavior, to humans influencing each other, to our brains being taken over by social media. 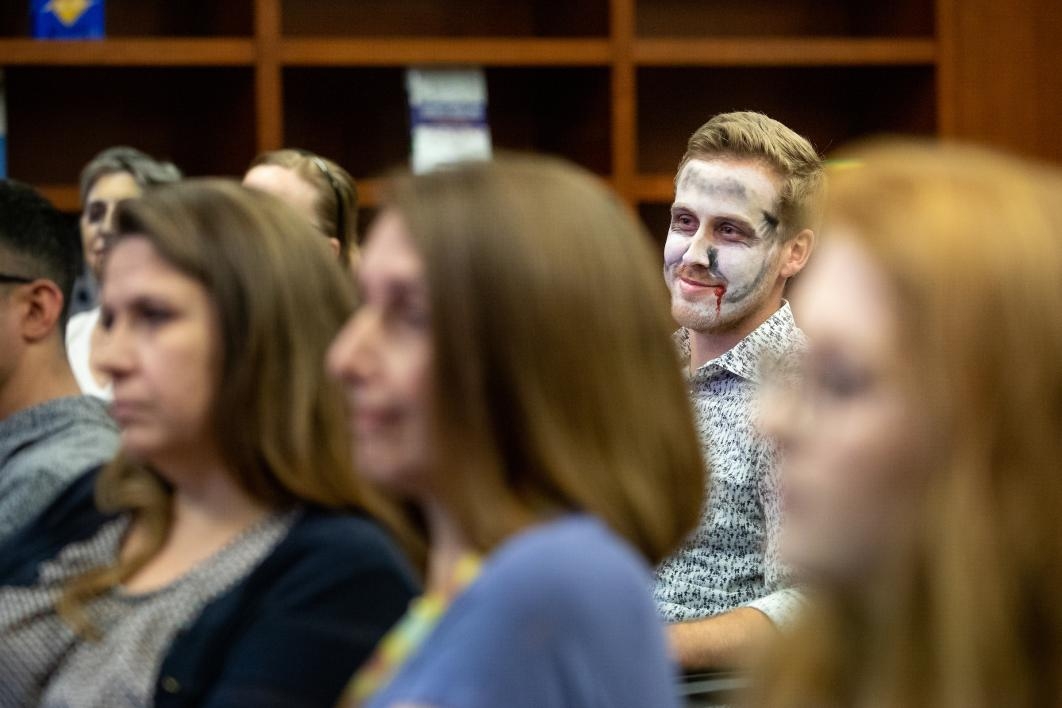 Evolutionary biology doctoral student Zach Compton and other members of the audience watch the live recording of the "Zombified" podcast. 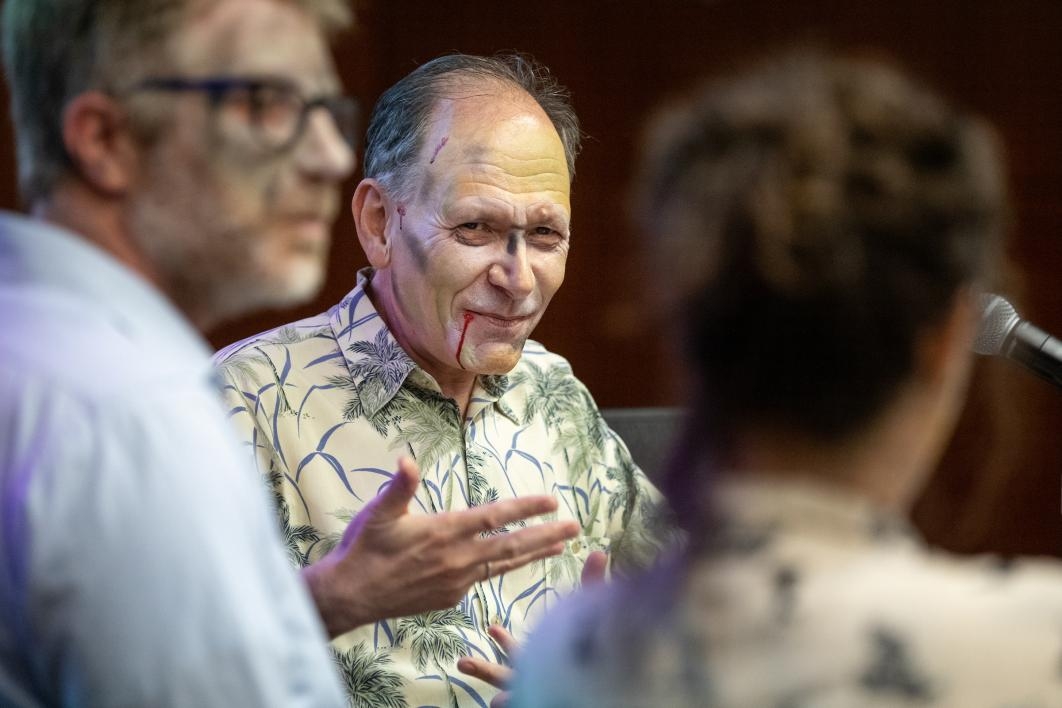 Psychology Professor Clive Wynne talks about feeding his 8-year-old dog a special meal of liver on the "Zombified" podcast.

In the episode, Wynne provides some insight into where dogs come from, how they tap into our attachment systems and why we find puppies to be so irresistibly cute.

Aktipis admits to being zombified by her own dog, Tia, a 2-year-old half-Lab, half-pit bull rescue.

That’s a good way of being zombified, she says. But there are more scary ways.

Lundberg-Kenrick, program manager for the Psychology Department and a self-professed zombie movie enthusiast, recalls a particular episode about being zombified by corporations.

“I think that was the scariest one, because it was just so real,” he said.

The podcast takes a purposely interdisciplinary approach to the science of zombification, including experts from disciplines as diverse as evolutionary biology, psychology, parasitology, microbiology and computer science.

“That's the only way that we're really going to be able to grapple with the complex and wicked problems that we're facing now, and that we will face more and more in the future, is if we can bring people together who have different knowledge and different perspectives, different approaches, different methods, and create an environment where everyone can talk to each other and listen to each other,” Aktipis said.

“The way I talk about it is ‘bringing brains together.’ Let's bring the brains, let's share our brains.”

A reluctant entrant into the production side of the podcasting scene, Aktipis came up with the idea for “Zombified” when searches for podcasts with a certain amount of intellectual meat proved fruitless. After airing her grievances with her grad students and lab manager, she finally caved under their goading and set out to make one herself.

“I want this podcast to be a conversation that you can listen to while you're doing your laundry or driving somewhere that’s really intellectually stimulating but also kind of like keeping you company,” she said. “That's the goal for the podcast, to be personal but also be educational and to engage at the same time with the ethical issues. I think that's important to be doing as we're doing science and I think I’ve been really lucky that I came to ASU because there's all these groups and organizations that are doing things like that.”

Part of the inspiration for the podcast came from similar existing efforts of Aktipis and her colleagues to make science, ethics and the often complex concepts and issues associated with them more accessible to a general audience through organizations like the Center for Science and the Imagination; the School for the Future of Innovation and Society; and the Lincoln Center for Applied Ethics, of which Aktipis is a member.

Aktipis is also the mastermind behind the Zombie Apocalypse Medicine Meeting and recently hosted the 2019 ASU Cooperation and Conflict Symposium. This year’s topic was “Telling Fact from Fiction in the Age of Information.” All of the discussions were recorded and will soon be available to the public for free via the Interdisciplinary Cooperation Initiative website.

“The motivation behind all this was, let's think about how to create something that is accessible to people who are engaged and willing to do a little bit of work to understand stuff sometimes,” she said. “We’re not dumbing it down, it's still a very high-level conversation, but it’s happening without the jargon and happening with this framing about zombies and the apocalypse.”

Why zombies and the apocalypse? That’s a good question for English faculty associate and “Zombified” episode guest Emily Zarka, an expert on monsters who hosts a PBS Digital Studios show on the subject called “Monstrum.”

“It’s hard to pinpoint one reason why the zombie genre has exploded in the past decade or so, but if I had to, I think it can be narrowed down to three primary reasons,” Zarka said.

“One, scientific and technological advancement. Genetically modified crops, genetic engineering, bioweapons, even a better understanding of real, brain-altering parasites, have led us to question not only the basis of life but to consider what could go wrong if we lose control of the science we are experimenting with. In other words, what could happen if nature takes the upper hand, or if some evil-minded person released a virus or plague that dramatically shaped our world? The second reason would be overpopulation. We are running out of space and resources for the influx of human life and this is reflected in recent films where zombies appear not by the hundreds or even thousands, but by the tens, even hundreds of tens of thousands. Finally, access. With the Internet and other digital technologies, the increase in conversation, including global conversation, about zombies has made these monsters and the themes they represent more prevalent.”

So there you have it. And if the idea of having a little more personal autonomy and understanding the world a little bit better sounds like something you can get down with, you’re going to want to tune in to “Zombified.”

But be prepared. At the beginning of each episode, you’ll have to answer the question: Have you been zombified?