“Oncolytic virotherapies are emerging as a new pillar of cancer care,” said McFadden, who directs the Biodesign Center for Immunotherapy, Vaccines and Virotherapy at ASU and is also a professor in the School of Life Sciences. “OncoMyx is currently being launched in Phoenix to test next-generation viruses in human clinical trials against a variety of human cancers.”

McFadden and his collaborators have spent the past two decades evaluating a poxvirus, called myxoma virus, as a cancer-fighting agent in a wide variety of tumor models. The natural target of the virus is the European rabbit, in which it causes a lethal disease. Because it only grows in rabbit cells or cancer cells, it would not infect healthy human tissue. In humans, the virus is harmless, except when it encounters a cancer cell. McFadden’s research team has successfully targeted various types of cancers.

Preclinical studies in mice and testing on cancer patient samples from Mayo Clinic in Scottsdale have demonstrated encouraging immune responses against tumors. These data build upon the continued clinical validation of OncoMyx’s platform to expand the boundaries of cancer treatment and potentially benefit a large group of patients.

OncoMyx plans to use the proceeds of the $25 million investment to advance development of its lead oncolytic virus therapeutic program and advance additional programs into development. This completion of the OncoMyx series A financing round, which typically represents a company’s first significant round of venture capital financing, was led by Boehringer Ingelheim Venture Fund (BIVF), Delos Capital and Xeraya Capital with participation from Korea Investment Partners, City Hill Ventures and Madison Partners.

“The $25 million invested in OncoMyx is the largest amount of series A funding raised for any ASU spinout,” said Augustine “Augie” Cheng, CEO and chief legal officer of Skysong Innovations. “And it speaks volumes to the promise and potential of Grant McFadden’s scientific team’s achievements to attract this level of venture capital investment and the extraordinairy track record of our entrepreneurial abilities of our ASU faculty, staff and students to continue to bring brilliant ideas to the marketplace for the benefit of humanity.”

To date, more than 135 startups have been launched based on ASU innovations. With this investment, these companies and their sublicensees have attracted more than $800 million in funding from venture capital firms and other investors, generating substantial local economic impact.

Concurrent with the financing milestone, OncoMyx has announced the finalization of its board of directors in addition to McFadden: Steve Potts, founder and chief executive officer of OncoMyx; Kanad Das, representing BIVF; Tim Xiao, representing Delos Capital; and Jason Rushton, representing Xeraya Capital. Potts, Xiao and Rushton have extensive experience in the biopharmaceutical industry with track records of success.

“This financing is a key step forward in advancing our pipeline of oncolytic immunotherapies,” Potts said. “We are thrilled to have this strong team of experienced investors to provide the financial resources and guidance to build our company and advance our therapeutic pipeline with the ultimate goal of delivering new treatment options to patients.”

“We invested in OncoMyx because we believe in the potential of the myxoma-based oncolytic viruses for the treatment of solid cancers,” Das said. “I look forward to working with Steve, Grant and the rest of the team to develop drugs that help improve patients’ lives across a range of malignancies.”

McFadden said he hopes the team can get the OncoMyx therapy into human clinical trials in the next few years. About two dozen other viruses that might treat cancer are currently in clinical trials. The U.S. Food and Drug Administration approved the first virus to treat cancer in 2015.

The fifth annual ASU Gammage High School Musical Theatre Awards took the stage on Saturday, May 25. The Tony Awards-inspired red-carpet affair included performances from nominated high schools and the announcement of the winners in 14 categories. 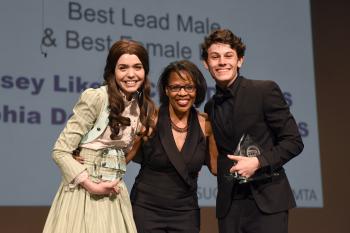 Likes and Donnell will spend a week in New York City where they will compete in The Jimmy Awards (named after the famed Broadway producer, James M. Nederlander) on June 24 at the Minskoff Theatre on Broadway.  Students from across the nation will participate in trainings with professionals with the hopes of winning the nationwide title of best performance by an actor or best performance by an actress.

The ASU Gammage Leadership Award is presented to graduating seniors for their leadership not only on the stage, but in their community and school. This year, both Gianna Agostinelli from Chaparral High School and Christian Perez from Shadow Ridge High School took home the award, along with $500 to use toward furthering their education.

“The ASU Gammage High School Musical Theatre Awards is an event that allows us to showcase some of the incredible talent in younger generations right here in Arizona,” said Colleen Jennings-Roggensack, executive director of ASU Gammage and ASU vice president for cultural affairs. 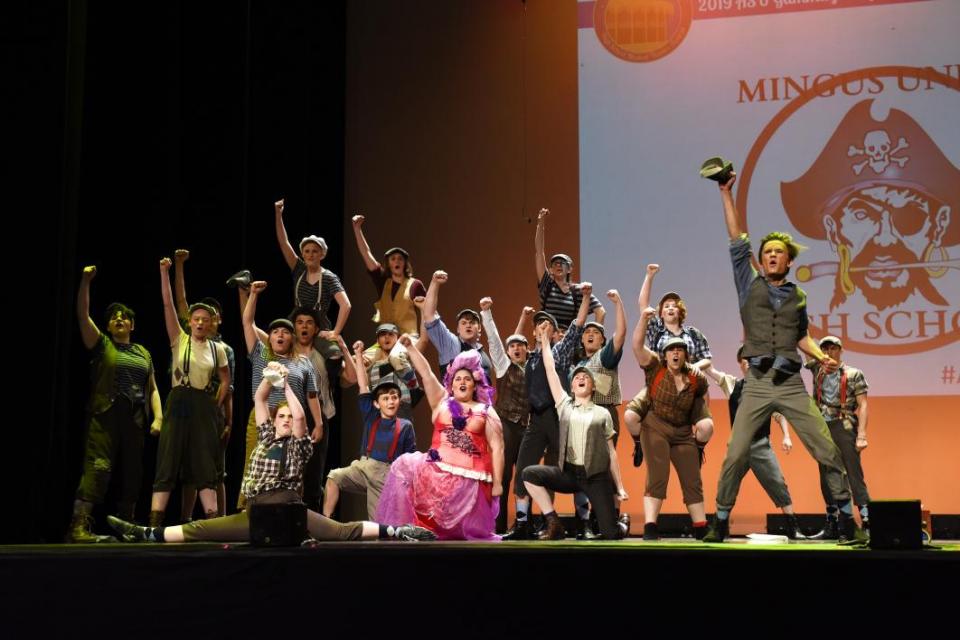 The students of Mingus Union High School perform a number from "Newsies" at ASU Gammage on May 25. Photo by Tim Trumble

Winners were selected by a panel of adjudicators comprised of theater professionals, teachers and enthusiasts in Arizona. The adjudicators attended the participating high schools’ performances and submitted scores and feedback.