A team of of students from Arizona State University and the University of New Mexico scored high marks in the U.S. Department of Energy’s 2013 Solar Decathlon international competition, which concluded Oct. 12.

The team’s energy-efficient house, dubbed SHADE (Solar Homes Adapting for Desert Equilibrium), scored fifth in the architecture category and sixth in the engineering category among the 20 teams participating in the competition. 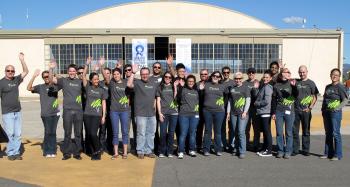 The ASU team consisted of 26 faculty members and current and former students from The Design School in the ASU Herberger Institute for Design and the Arts, the Ira A. Fulton Schools of Engineering and the School of Sustainability.

“I am very proud of the students and faculty who undertook the long and difficult task of designing and constructing an energy-efficient house for the desert,” said Michael Underhill, interim dean for the Herberger Institute for Design and the Arts. “Our first time competing in the Solar Decathlon has featured a sophisticated design that does not shy from the complexity of the problems of efficiency and habitability.

"This was a notable collaboration between ASU programs in design, engineering and sustainability, and programs from the University of New Mexico.”

The Solar Decathlon takes place every two years and involves collegiate teams from around the world that design and build energy-efficient houses powered by solar energy. The teams spent almost two years creating their houses, which were then judged on site at a 10-day public Solar Decathlon event in Irvine, Calif.

According to the rules of the decathlon, the goal is to create a house that is affordable, attractive and easy to live in; maintains comfortable and healthy indoor environmental conditions; supplies energy to household appliances for cooking, cleaning and entertainment; provides adequate hot water; and produces as much energy as it consumes, or more.

The students involved in the decathlon are part of a collaborative effort between architecture, construction management and engineering programs at ASU and the University of New Mexico.

Team ASUNM focuses on building materials and energy systems that are appropriate for the desert Southwest – a part of the country that is expected to see continued population growth over the coming decades.

The house is designed to stay cool even in hot weather and to provide a stylish, comfortable, energy-efficient home for the team's target audience, active retirees.

"Team ASUNM's SHADE house entry in this year's Solar Decathlon competition highlights the strengths of The Design School's teaching, research and outreach," said Craig Barton, director of The Design School. "In the design and construction of SHADE, Phil Horton, his student colleagues from The Design School and their collaborative partners from ASU and UNM have demonstrated the ingenuity and creative products which arise from interdisciplinary design research.“

"The project was an extraordinary opportunity for our students to engage in development of a collaborative design project that allowed them to explore new models of design practice. We value their efforts, the project they produced and the experiences which they bring back to our community."

ASUNM team member Alisha Roland graduated from The Design School with a master's degree in architecture. She’s been involved with the project manual for SHADE (which includes the structure’s specifications), as well as with a lot of the exhibit materials and construction on the actual house.

“I never realized how important it is to communicate with everyone when it comes to a project like this,” Roland said. “It’s one thing to see it drawn on a piece of paper, but to get it constructed is a whole other animal ... so that’s been a real challenge for us, but it’s also been a great learning process at the same time.”

Alia Taqi, an ASU graduate student pursuing degrees in the built environment and architecture, has been involved in the project from the beginning, starting as a member of the architecture team. (There are four teams within the ASUNM group itself: architectural, communications, construction and engineering.)

Inspired by the project, Taqi decided to take on the lighting design of the house, as well as the kitchen design. Later, she became the media and public relations manager for the project, networking with local media both in Arizona and New Mexico. She’s also the communications lead for the team itself. On site, she was the project manager. She’s also been responsible for helping create a brand for the team’s house – and she’s done such a good job that she can now fairly call herself a marketing specialist as well as an architecture student.

ASU sophomore civil engineering major Vid Micevic saw his horizons broadened by the project as well. Working on the Solar Decathlon project “made me step out of my comfort zone and learn more about the whole construction and design process,” Micevic said. “I would never have gotten the chance to be a part of creating something like this just by doing engineering class projects.”

Response in the press has been overwhelmingly positive. In an article in the online magazine Earth911, a writer called SHADE “a cool house for a hot climate.”

SHADE is cool, both in terms of temperature and aesthetics. One of Taqi’s favorite things about the house, she said, is the contrast between the rougher exterior and the sleek modern interior. She’s also particularly proud of how efficiently the house uses solar power.

Taqi said, “Inspired by ASU being one of the top schools implementing solar technology throughout its campus, we really focused on expanding the ability of the house to produce as much energy as it needs.”

The SHADE house will be taken to New Mexico for several months and then returned to Phoenix in 2014. Plans are to put the structure on public exhibit at Central Avenue and Indian School Road as part of Mayor Greg Stanton's “PHX Renews” initiative, where it will serve as a model for sustainable living in the desert Southwest.

For more about Team ASUNM and SHADE, visit:

For a full list of donors and sponsors, visit: asunm.org/sponsors.

Herberger Institute for Design and the Arts Engineering Employee

Icarus Rocketry, the newest club in the School of Earth and Space Exploration, has lofty goals – literally.

Icarus Rocketry, the newest club in the School of Earth and Space Exploration, has quite literally lofty goals for the coming year.

By the end of the school year, members of the Icarus team aim to become the first student-driven team to design a high-powered rocket that flies to an altitude of 100,000 feet, said Peter Nguyen, team project director. Mount Everest is about 29,000 feet above sea level. 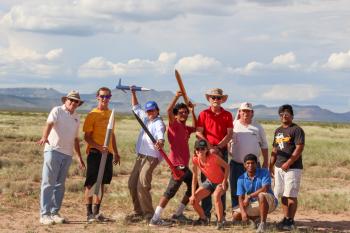 The team, which was founded this past summer, doesn’t want to stop there.

Within the next three years, Icarus plans on breaking all altitude records set by university rocketry groups by flying a rocket to an altitude of 100 kilometers, the height commonly accepted as the edge of space, Nguyen said.

“Most people, when they think of rocketry, think of model rockets like the kind you build in high school,” Nguyen said. “But high-powered rockets regularly reach altitudes of a few thousand feet.”

With flying at the forefront of their initial agenda, the Icarus team wants to give its members the opportunity to fly at rocketry competitions, Nguyen said. The team plans on using commercial rocket parts to achieve their first flight goal of 100,000 feet and to fly at the Intercollegiate Rocket Engineering Competition in June, he said.

To get to higher altitudes, however, the team will build its own rockets from scratch.

“As we progress toward becoming the first student group that hits the edge of space, we’ll have to work on building our own propulsion systems,” Nguyen said.

“Once we have the capability to reach 100 kilometers, we could use our rockets as a test platform within the School of Earth and Space Exploration for those who want to test experiments in low gravity or high altitude conditions,” he said.

Goals aside, Icarus is still in the initial stages of teaching its members about rocketry. The club meets at 5:30 p.m. on Thursdays, in room 226 of the Bateman Physical Sciences Center – F Wing, on the Tempe campus, for workshops on recovery systems, design software and propulsion systems.

The club welcomes students from any major, as long as they are interested in rocketry and willing to learn.

“We have a good mix of graduate and undergraduate majors from astrophysics, systems design and engineering, but we’ll catch anyone up to speed as long as they’re interested and committed,” he said.

Icarus Rocketry is not associated with Daedalus Astronautics, a high-powered rocketry club at ASU that was called ICARUS when it was founded in 2001.