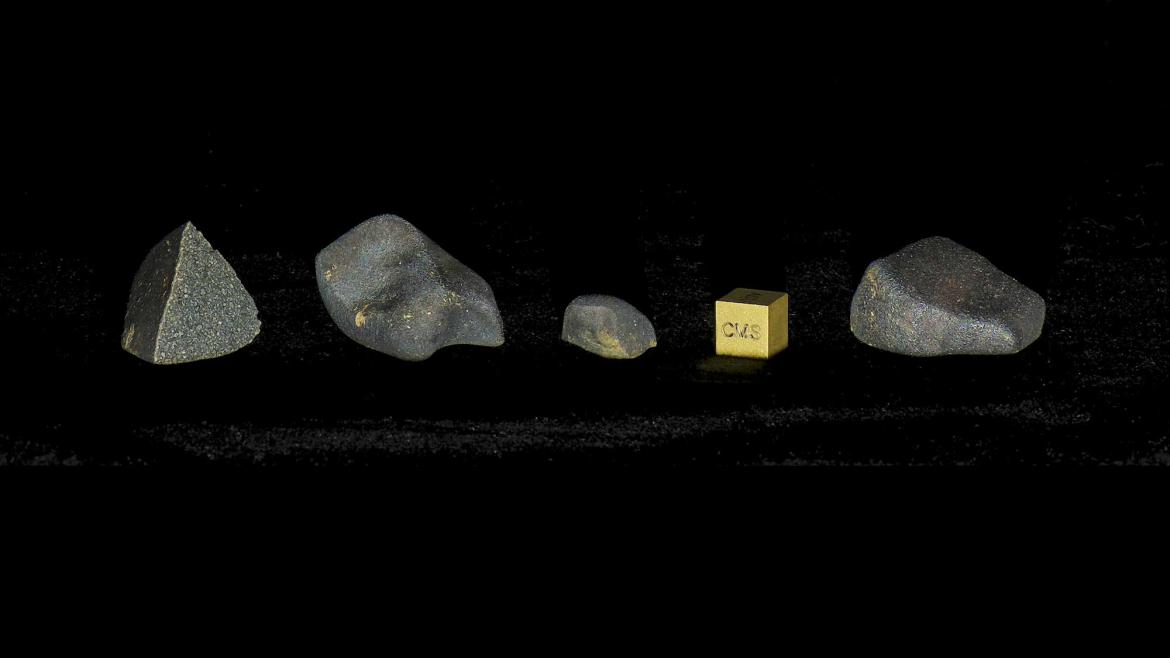 The reported fireball was a meteor about the size of a washing machine. As it entered Earth’s atmosphere, it broke apart and rained hundreds of meteorites in and around the small town, including a two-pound rock that crashed through the roof of a local house, smashing the dining room table below.

While meteorite falls happen around the world on a regular basis, early reports indicated that this meteorite belongs to a special group called "carbonaceous chondrites" that are rich in organic compounds and full of water.

“Many carbonaceous chondrites are mud balls that are between 80 and 95% clay,” said Laurence Garvie, a research professor in the School of Earth and Space Exploration and a curator for Arizona State University's Center for Meteorite Studies. “Clays are important because water is an integral part of their structure.”

From these early reports, the race was on to collect samples and bring them back to labs around the world for scientific analysis.

“These had to be collected quickly and before they got rained on,” Garvie explained. “Because they are mostly clay, as soon as these types of meteorites get wet, they fall apart.”

Fortunately, meteorite collectors had five rain-free days in the region to collect samples from the fall. About 55 pounds of meteorites (collectively the size of a large beach ball) have been recovered so far.

Once Garvie had the donated samples, he rushed back to the lab on ASU’s Tempe campus to run the analyses needed to determine the classification of the meteorites. He is now leading an international classification effort.

“I was in the lab by 5 a.m. the next morning after picking up the samples to get them ready for the initial analyses,” Garvie said. “Classification of new meteorites can be like a race with other institutions, and I needed ASU to be first so that we’ll have the recognition of being the collection that holds and curates the type specimen material.”

ASU’s Center for Meteorite Studies has a specialized curatorial facility for meteorites, one that rivals many other international facilities. In particular, ASU has nitrogen cabinets for storage of particularly air-sensitive meteorites where the nitrogen atmosphere preserves the meteorites and stops their degradation.

“If you left this carbonaceous chondrite in the air, it would lose some of its extraterrestrial affinities,” Garvie explained. “These meteorites have to be curated in a way that they can be used for current and future research, and we have that ability here at ASU.”

For the meteorite classification process, Garvie is working with Karen Ziegler from the Institute of Meteoritics at the University of New Mexico. In her lab, Ziegler analyzed the samples for their oxygen isotopes, which helps determine what characteristics this meteorite shares with other carbonaceous chondrites.

Garvie is also working with ASU School of Molecular Sciences’ Professor Emerita Sandra Pizzarello, an organic chemist known for her work with carbonaceous chondrite meteorites. Pizzarello’s analysis is helping to determine the organic inventory of the sample, which may provide insights into whether these types of meteorites provided the ingredients for the origins of life on Earth.

Ultimately, the meteorites will be approved, classified and named by the Meteoritical Society’s nomenclature committee, an international team of 12 scientists who approve all new classified meteorites. This approval is the first and most important step of an in-depth scientific analysis. 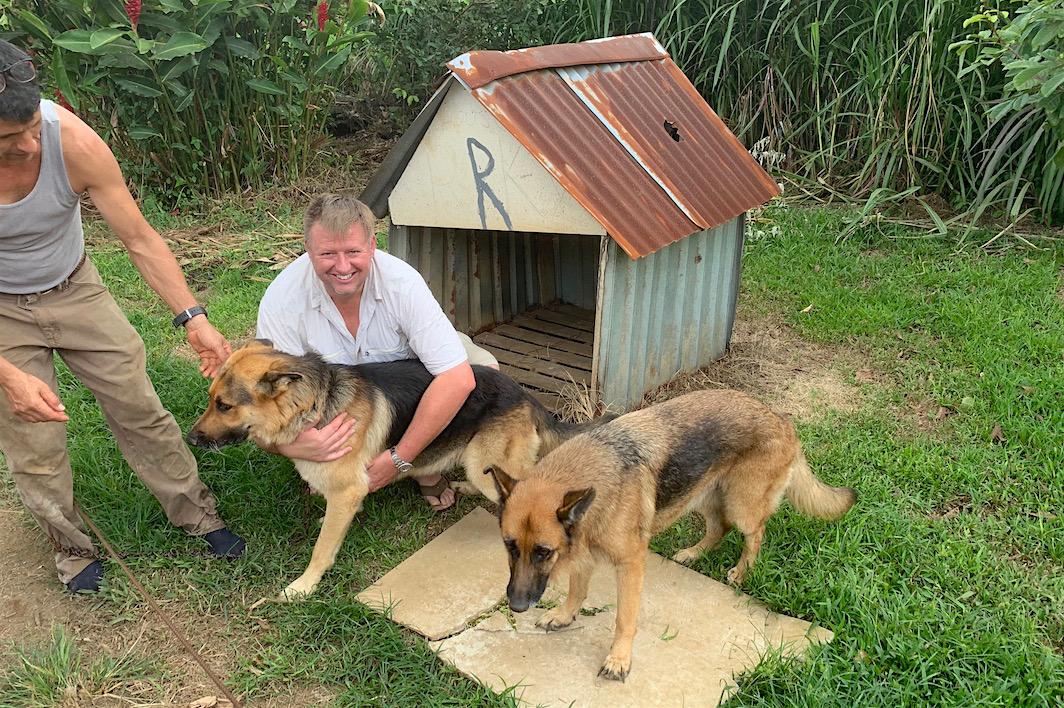 A meteorite from the Aguas Zarcas fall pierced the roof of a doghouse, narrowly missing the sleeping dog, aptly named Rocky. Mike Farmer, who donated samples of the meteorite to ASU, is pictured here in Aguas Zarcas with "Rocky" and another dog, both unharmed by the meteorite fall. 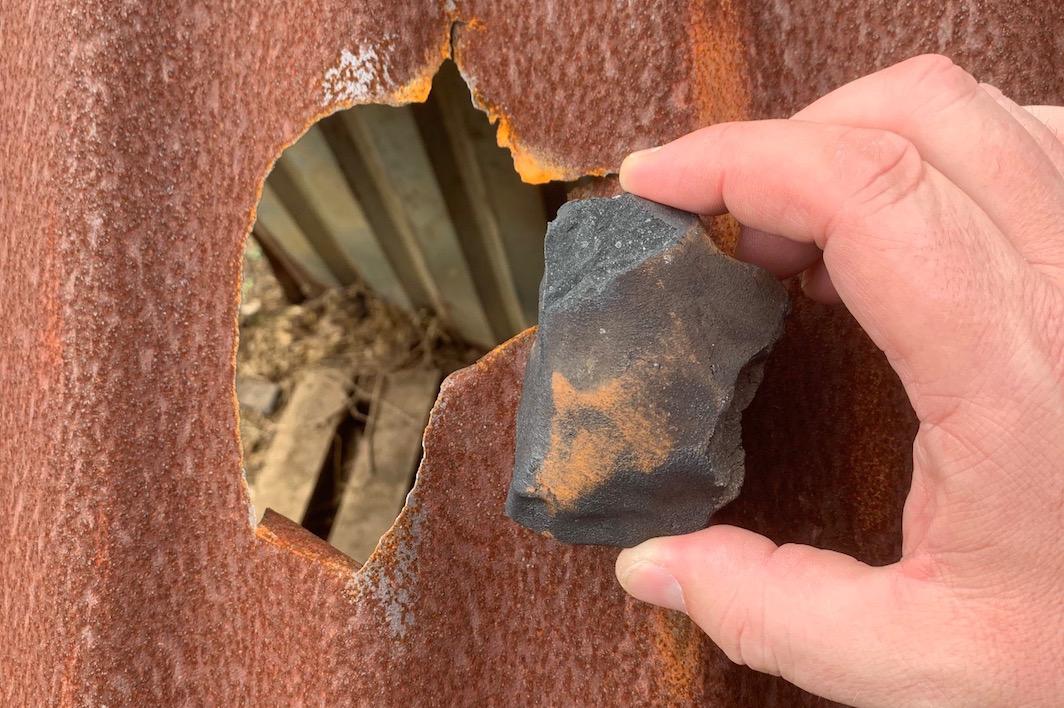 The meteorite from the Aguas Zarcas fall that pierced the roof of Rocky's doghouse. 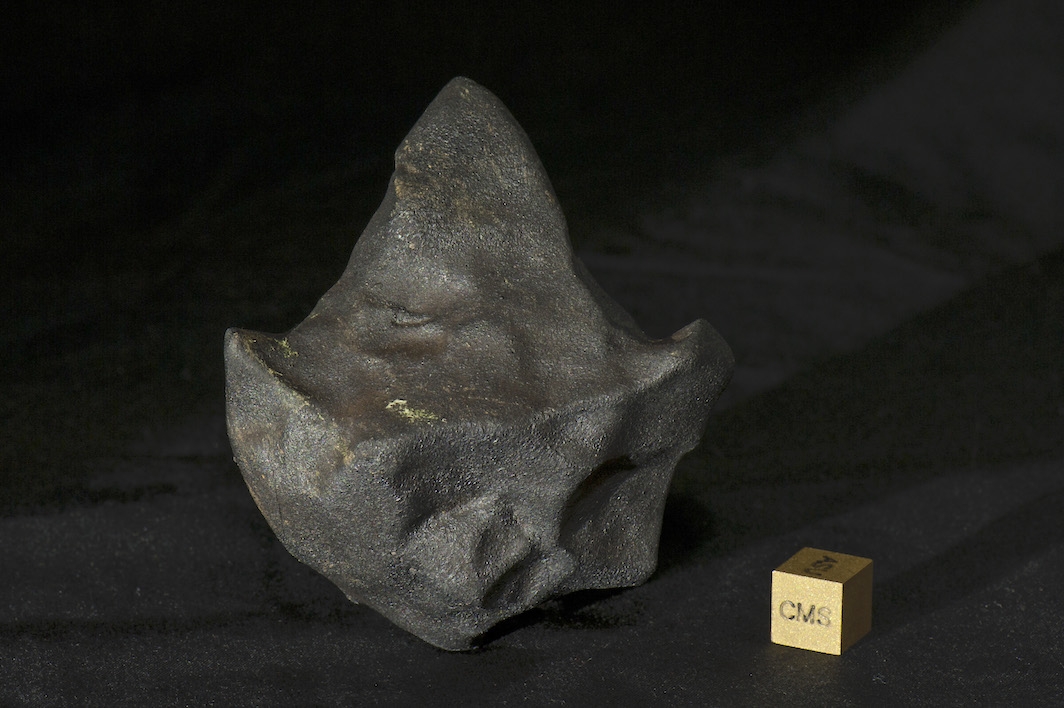 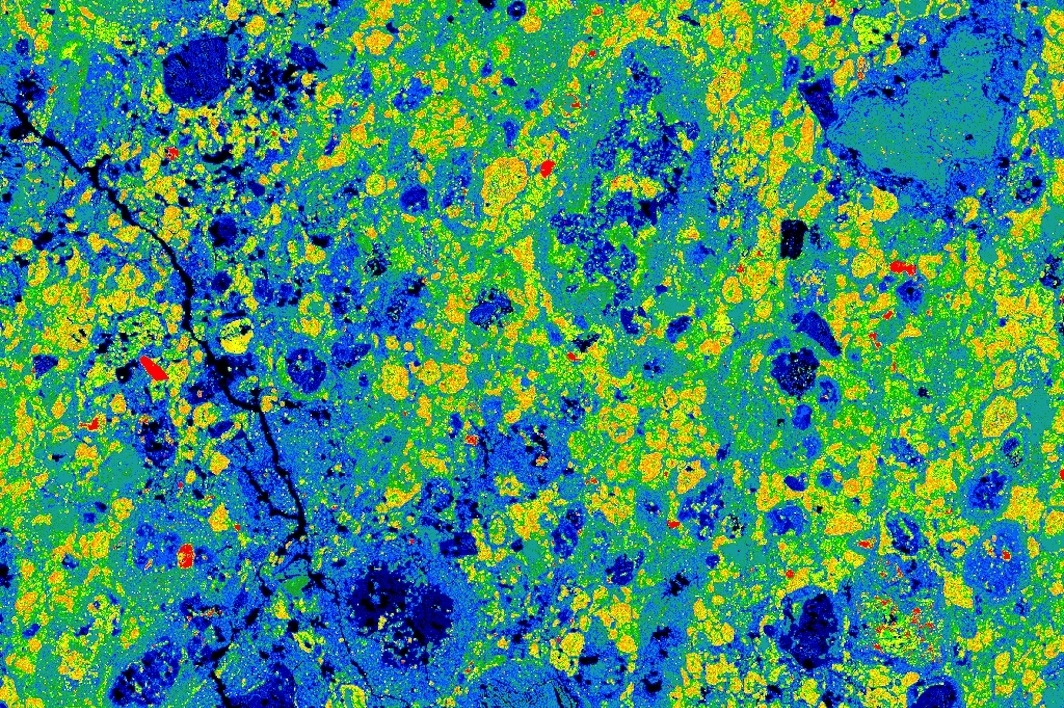 This colorful image is a composite element map showing the distribution of different minerals at the microscopic scale in a fragment of an Aguas Zarcas meteorite. Orange-yellow colors show the distribution of a mineral called tochilinite, deep-blue colors represent olivine, and red colors are pentlandite and pyrrhotite.

Nature has said, 'Here you are!'

Because of their water-rich composition, carbonaceous chondrites can provide insights into how we may be able to extract water from asteroids in space as a resource beyond Earth.

“Having this meteorite in our lab gives us the ability, with further analysis, to ultimately develop technologies to extract water from asteroids in space,” Garvie said.

Garvie and his team, as well as scientists around the world, will be analyzing these meteorites — for years to come — for new insights about water extraction from meteorites as well as insights into the origins of the solar system and the organic process.

“Nature has said ‘here you are,’ and now we have to be smart enough to tease apart the individual components and understand what they are telling us,” Garvie said.

The Costa Rican meteorite comes from an asteroid that was an early planet (planetesimal) that had water and organic materials. “It formed in an environment free of life, then was preserved in the cold and vacuum of space for 4.56 billion years, and then dropped in Costa Rica last week,” Garvie explained.

By happenstance, the last carbonaceous chondrites meteorite fall of this significance happened 50 years ago in 1969 and was curated by another ASU professor and founding director of ASU’s Center for Meteorite Studies, Carleton Moore, who is now an ASU emeritus Regents’ Professor. The meteorite fell to Earth near Murchison, Australia, in 1969 and is one of the most studied meteorites in the world.

"Carbonaceous chondrites are relatively rare among meteorites but are some of the most sought-after by researchers because they contain the best-preserved clues to the origin of the solar system,” center Director Meenakshi Wadhwa said. “This new meteorite represents one of the most scientifically significant additions to our wonderful collection in recent years.”

The other ASU connection with this recent Costa Rican meteorite fall is that the samples closely resemble what scientists are discovering on the OSIRIS-REx mission to the asteroid Bennu, on which ASU has the Phil Christensen-designed Thermal Emissions Spectrometer (OTES). This instrument is making mineral and temperature maps of the asteroid Bennu, which is thought to be composed of a remnant carbonaceous chondrite planetesimal.

Sample on display and open to the public at ASU

Samples from this meteorite fall, and many others, are on display for the public on the ASU Tempe campus in the Center for Meteorite Studies collection on the second floor of the Interdisciplinary Science and Technology Building IV.

ASU’s Center for Meteorite Studies is home to the world’s largest university-based meteorite collection, with over 40,000 individual specimens representing more than 2,100 distinct meteorite falls and finds. The collection is actively used for geological, planetary and space science research at ASU and throughout the world.

Arizona State University alumna Shannon Ditto, who is currently studying at the University of Strasbourg in France on a Fulbright Scholarship, recently presented her research at a conference and a seminar.Ditto graduated from ASU in May 2018 with bachelor’s degrees in French and German — she also speaks Russian and Italian — as well as a minor in global studies. Her current research builds ...

Arizona State University alumna Shannon Ditto, who is currently studying at the University of Strasbourg in France on a Fulbright Scholarship, recently presented her research at a conference and a seminar.

Ditto graduated from ASU in May 2018 with bachelor’s degrees in French and German — she also speaks Russian and Italian — as well as a minor in global studies. Her current research builds on her Barrett, The Honors College thesis project, a translation of the French writer Colette’s 1910 novel "La Vagabonde." 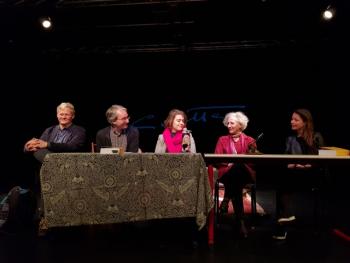 She spoke in March on a panel at a conference at the University of Strasbourg called “Colette … persiste et signe.” Ditto talked about Colette’s legacy and the importance of translating her work. Shortly after, she presented at the 65th annual Berlin Seminar, a gathering of Fulbright Scholars. That presentation focused on the lack of representation in the publishing world of translated novels written by women.

Ditto first encountered "La Vagabonde" in a course taught by Frédéric Canovas, an associate professor of French and faculty head of French and Italian in the School of International Letters and Cultures. She took the initiative to read the text in both French and English and noticed a discrepancy between the two editions.

“The translation was clunky and awkward; it seemed to butcher the sensuous but simple style of Colette’s French,” Ditto said. “I briefly thought that it was a shame that there wasn’t a better translation.”

When it came time to complete her honors thesis, Ditto decided to make that translation herself. She recently finished the first draft and hopes to get it published, in part so that English-speaking audiences can understand “why Colette’s words still ring so true today.”

Canovas said Ditto’s work goes above and beyond the caliber of work undergraduates typically produce.

“I hope this new translation of 'La Vagabonde,' close to the original spirit of Colette’s text, will allow English-speaking readers to rediscover Colette as a powerful feminist and advocate of women’s rights,” Canovas said.

Ditto is now pursuing a master’s degree in French and comparative literature at the University of Strasbourg. Her master’s thesis explores the link between another novel by Colette, "La Chatte," and a novel by another French writer, "L’Animale" by Rachilde. She is studying with Guy Ducrey, a professor of comparative literature at the University of Strasbourg who organized the conference about Colette that Ditto presented at.

Much of Ditto’s work engages with tensions in feminist thinking and the way women have been treated by men and society at large.

She said she hopes that contemporary feminists realize how much they have in common with other women who fought for their rights throughout history and who shared many of the same experiences. Women’s contributions have historically been ignored, Ditto said, so people need to read novels by women to understand what life was like for them and what they accomplished.

“The only way to rectify this problem is to reconnect women to their heritage of womanhood,” Ditto said. “So much effort has gone into these women being forgotten or ignored, and even more effort needs to go into them being remembered.”