The emerging field of nanotechnology has spurred many advances in energy, defense and medicine applications.

Nanomaterials have unique and rewarding chemical, physical and mechanical properties, from enabling superhydrophobic and self-cleaning windows to enhancing absorption and efficiency of photovoltaic cells. In an ideal world, nanomaterials would be everywhere, but they often don’t appear in our lives. 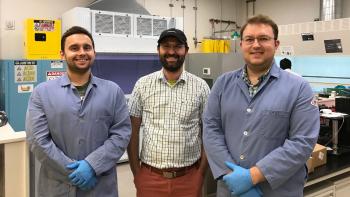 The need for new methods to mass manufacture nanomaterials has led Arizona State University Assistant Professor Bruno Azeredo to study the physics of nanomaterials’ processing and find solutions to this problem.

Azeredo, a faculty member in the Ira A. Fulton Schools of Engineering at ASU, co-authored a paper published May 9 in the Proceedings of the National Academy of Sciences of the United States of America. The paper introduces electrochemical nano-imprinting as a new, low-cost method for large-scale production of single-crystal semiconductors, such as silicon.

He shares his thoughts on electrochemical nano-imprinting and some of his research findings.

Answer: In traditional manufacturing operations, like coin manufacturing, a material is heated to be formed into a shape. We take metal disks (blanks) and imprint them with a hard die (forming). The pressure of the die, or mold, at high temperatures allows the metal to flow into the shape of the die.

In nanomanufacturing, this concept has been miniaturized down to the nanoscale, particularly for metals and polymers by a process called nano-imprinting lithography. This process works with the same principle as coin manufacturing but can create features as small as 10 nanometers! However, nano-imprinting lithography doesn’t work for inorganic single-crystal semiconductors because they recrystallize and degrade during heating cycles and become almost useless.

We went on a journey to imprint semiconductors, particularly silicon, without the use of combined heating and imprinting. We found it could be done with electrochemistry, and we called it electrochemical nano-imprinting (Mac-Imprint).

In Mac-Imprint, a mold, or stamp, is coated with a thin-film catalyst and brought into contact with a silicon wafer while immersed in a wet etchant (the chemical used to etch designs into metal). Upon the catalyst-coated stamp contacting the silicon surface, the silicon substrate is selectively corroded and etched at the contact points only. As the etch evolves, the silicon substrate takes the form of the stamp. This process is analogous to coin manufacturing, except we etch the silicon instead of using forming techniques.

Q: What does this process do that current processes can't do?

A: Mac-Imprint has wafer-scale patterning capability and sub-20-nanometer shape accuracy in three dimensions. The stamps/molds may be reused numerous times for mass manufacturing. Mac-Imprint is compatible with roll-to-roll (R2R) nanomanufacturing — a process used to create electronic devices on a roll of flexible plastic or metal foil — and uses low-cost tooling and Earth-abundant consumables.

The use of consumables gives electrochemical nano-imprinting the potential to be very inexpensive and extendable to an R2R configuration for large-scale production formats. Additionally, this technique is extendable to other semiconductor materials and formats, such as amorphous silicon films and III-V semiconductors.

Q: Does this method open up new avenues for circuit fabrication?

A: Mac-Imprint enables researchers to manufacture 3D microstructures and nanostructures onto silicon with nanometer precision and shape accuracy via a low-cost approach.

This new capability enables prototyping complex 3D devices/surfaces, which will have a cascade effect in many research areas where 3D nanopatterning is critical such as nanophotonics, silicon photonics, biosensing and photovoltaics.

Particularly, we are interested in silicon photonics and free-form optics for making advanced optical devices like infrared lenses, optical interconnects, waveguides and collimators.

Q: How can electrochemical imprinting be used in the future?

A: We can’t benefit from nanotechnology if we don’t invent processes for mass production of nanomaterials. The technique we invented for nanopatterning of silicon may be employed in the manufacturing of the high-speed optical interconnects used in data centers.

The increase in speed to transmit signals will allow for more high-speed connections and lead to a more interconnected world.

Deanna Swoboda, associate professor in the ASU School of Music, has enjoyed a vibrant career as a performer, educator and entrepreneur, but she said one of her most challenging roles yet is serving as the official conference host for 500-plus brass players at the International Women’s Brass Conference at ASU on May 21–25. Swoboda, an Eastman tuba artist, carved a path for herself as a tuba p...

Deanna Swoboda, associate professor in the ASU School of Music, has enjoyed a vibrant career as a performer, educator and entrepreneur, but she said one of her most challenging roles yet is serving as the official conference host for 500-plus brass players at the International Women’s Brass Conference at ASU on May 21–25.

Swoboda, an Eastman tuba artist, carved a path for herself as a tuba player performing and teaching around the world when there were only a handful of women with careers playing tuba and serving as role models for female musicians. She has played the tuba in hundreds of concerts, solo recitals and presentations throughout the U.S. and Europe; taught tuba and euphonium; developed music and entrepreneurship programs; coached chamber music; and presented at prestigious conferences and meetings as an advocate for music education. Swoboda, an ASU alumnus (DMA '10), co-hosted the 2012 conference at Western Michigan University and was invited by IWBC to host the international conference held at the ASU School of Music this year. 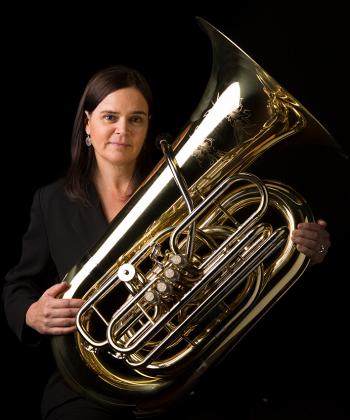 ASU School of Music Associate Professor Deanna Swoboda carved a path for herself as a tuba player performing and teaching around the world when there were only a handful of women with careers playing tuba and serving as role models for female musicians. Download Full Image

“I was excited to accept the IWBC invitation to host the conference as it features women brass players, is a great recruiting opportunity for potential students and provides great visibility for ASU,” Swoboda said.

She said IWBC is the largest conference she has ever been involved with and this year’s conference has record numbers of registrations and competitors. Conference attendees will be a combination of mostly professors and college students from different universities, some professional performers and some high school students. The conference is open to all genders but features mostly women and new works, and conference featured artists include seven women who have held or still hold major prominent brass positions.

“One of my best hopes for this conference is to make women in music — specifically women brass players and women composers — more visible to the global community,” said Swoboda.

The conference schedule includes recitals, presentations, master classes, mock auditions, competitions, exhibits and evening concerts open to the public. There are solo and small ensemble competitions throughout three days, with 150 to 200 competitors and mock auditions for orchestras and military bands. Two of the evening concerts will open with student ensembles. All participants have the opportunity to play in an ensemble led by a professional. The various ensembles, including euphonium, horn, trumpet and trombone, will perform in concert on Saturday. The U.S. Army Bands for Horn and Tuba, a conference exhibitor, will also be holding auditions on Saturday for available positions in their horn and tuba bands.

Evening concerts will be held at the Evelyn Smith Music Theatre in the Music Building on ASU’s Tempe campus and are open to the public: