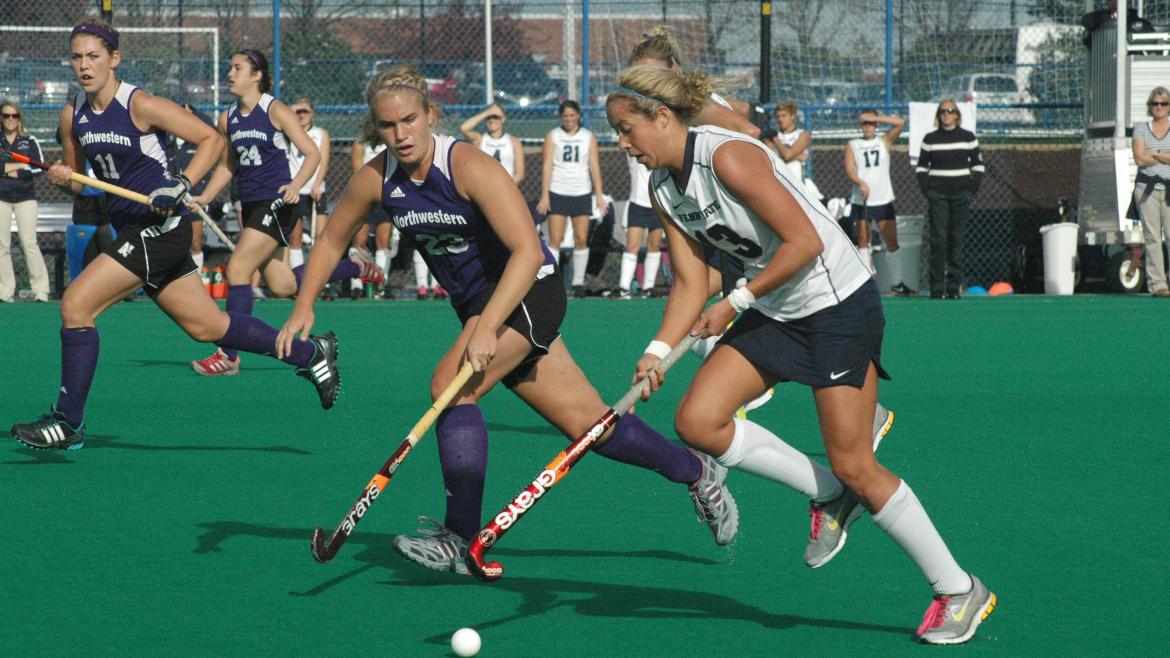 Awareness of concussions as a problem in college sports has been on the rise in recent years, due in part to the highly publicized deaths of former NFL players diagnosed with chronic traumatic encephalopathy, or CTE, the brain condition associated with repeated blows to the head.

Yet despite this growing recognition, leaders in college sports, including the NCAA, remain concerned about the low rates of concussion reporting by college athletes.

To that end, a team of Arizona State University social scientists led by Professor Steve Corman of the Hugh Downs School of Human Communication spent three years researching the behaviors of college athletes when it comes to reporting concussion symptoms.

Corman, director of the Hugh Down School’s Center for Strategic Communication, received a $400,000 grant from the NCAA-Department of Defense Mind Matters Research Challenge to study what influences concussion reporting among college athletes.

The first paper from the project is now available in the open-access journal PLOS ONE.

Corman says the simple education on concussions provided to student-athletes is not effective.

Because many symptoms of concussions are internal — difficulty thinking, blurry vision and fatigue — athletes must recognize and report symptoms to be effective. 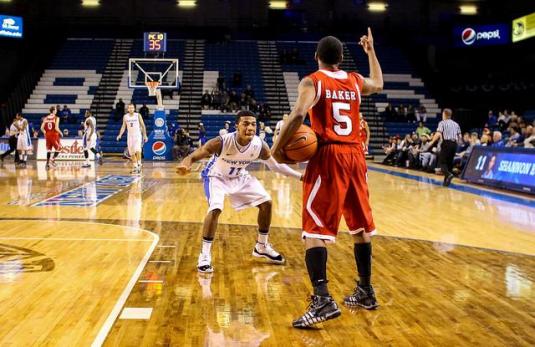 Training student-athletes to register the signs of a concussion is very important, experts say.

Assistant Professor Bradley Adame of the Hugh Downs School, the co-lead investigator on the study, says the researchers found the student-athletes either suppress or totally deny feeling these symptoms so that they can keep playing.

“What we are trying to do is change that behavior,” Adame said. “The whole process is dependent on communication from the athlete. There are a couple of tests that help with the diagnosis of a concussion, like dizziness and cognitive indicators, but ultimately it relies on the athletes to say how they are feeling.”

The research team surveyed over 600 male and female athletes who played Division 1 football, soccer, basketball, wrestling, lacrosse or field hockey on their perceptions related to concussions and severe head impacts. In addition, over 100 interviews were conducted with athletes, coaching staff and athletic trainers to determine organization and team culture when it comes to concussion education, processes and communication dynamics.

For this research, Corman explained that his team employed a socioecological approach, an approach to health communication that has been developed over the past several years.

“This approach says you can’t just look at individual health decisions in a vacuum, because people are embedded in larger systems,” Corman said. “So if you think of it kind of like an onion, there are individual tendencies at the center, but around those are the influences of groups and organizations and around that is a context of social and cultural factors that influence the other two.”

Corman says the athletes’ beliefs affect their attitudes and behaviors. He adds that those sets of beliefs are known as vested interests, and in sports, there is one belief that is very powerful.

“The vested interest that gives us the most reason for concern is immediacy,” Corman said. “Although athletes tend to know that there are long term potential consequences from a concussion, like CTE in old age, they see those consequences as far off in the future, not something that affects them right now. So we think that is one thing that is keeping athletes from reporting concussions: They don’t think it’s an immediate problem.”

Hugh Downs School Assistant Professor Alaina Zanin analyzed the interview data from the student-athletes and revealed that some failed to self-report due to possible undesirable reactions from teammates and coaches. Overcoming student-athletes' desire to not "let the team down" by reporting an injury is a challenge.

“Teams have cultures, they have certain norms and values and expectations of their athletes, and these influence the athlete’s decisions about whether to report concussions or not. They don’t want to feel like they are letting down their team. Or they might think the norm of their team is to keep going even if you are injured.”

Zanin says when one college soccer player was asked why she didn’t report a severe head injury she sustained in a game, she reported that she was “scared to tell her coaches” because she didn’t know if they would believe her.

The player then added, “With like a broken ankle, you can see it. With a concussion, it is based on your words. 'This is what happened.' I was kinda nervous to tell them, for them to get mad at me, which was not smart.”

Corman says at the larger level there are cultural narratives about sports. One of them is identified as "masculine-warrior."

The movie "Rocky" is an example of masculine-warrior narrative, said Scott Ruston, a research scientist in ASU’s Global Security Initiative who collaborated on the study: “Rocky doesn’t even actually win at the end. But he wins in life because he asserts his masculine nature.” He added that this narrative plays out every Sunday during football season.

“If you watch any NFL broadcast, the characterizations of the players all feed into these narratives, whereby it’s these qualities of the warrior that are the key factors in advancing the team’s victory.”

Using the research gathered from the student-athletes, Corman and his research team produced a documentary for student-athletes that emphasizes the short-term dangers of playing through a concussion.

“In the video we are producing, for example, we are not really using fear appeal. We are making more of a rational or narrative appeal to them,” Corman said. “We tell them that they have been thinking all along concussions are a long-term problem when it’s really a short-term problem that’s going to interfere with the goals they want to achieve. I think that sort of approach is really the best one. It’s probably not easy to scare most athletes, especially if they are masculine-warriors, so I think appealing to their reasoning and their wants and needs is the best way to go.”

One important message from the video for the athletes is that head injuries affect every aspect of their life. It emphasizes the fact that a concussion can severely degrade their performance in the classroom, and that reporting and getting treated for any head injury can prevent them from bombing an exam, or even from blowing a play on the field. 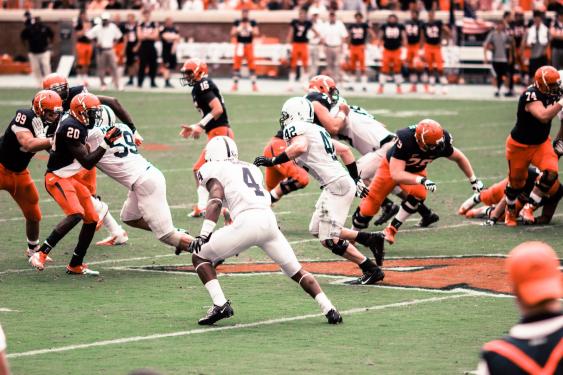 Communicating the dangers of playing through injury is key.

Their next step is to test how athletes respond to watching the video. A computer will track eye movement and heart rate. It tests whether the subject has an emotional response to what she is seeing the video. If her heart rate goes up, or if her eyes linger on a certain scene, the researcher knows the subject is focusing on the message.

“There’s a lot of research out there on the factors that lead athletes to report or not, so what we hope is that our research findings can be incorporated into educational programs, videos like the one we are trying to do, best practices for the training and coaching staffs for dealing with concussion to overall increase the reporting rate,” Corman said.

“The earlier you can get these reporting practices ingrained in children and teach them about the value the better because those kids grow up to be athletes and wind up being college athletes and pro athletes. The sooner you start with change efforts like that the better.”

It doesn’t take special insight to recognize dog owners love their dogs. A lot. But the latest episode of ASU Now’s Thought Huddle podcast series digs deeper in an effort to unearth the origin of dogs, explore the purpose of dogs and assess what makes dogs special. Of course, heartwarming stories from dog owners are also part of the mix. Thought Huddle host Mary-Charlotte Domandi speaks to thr... 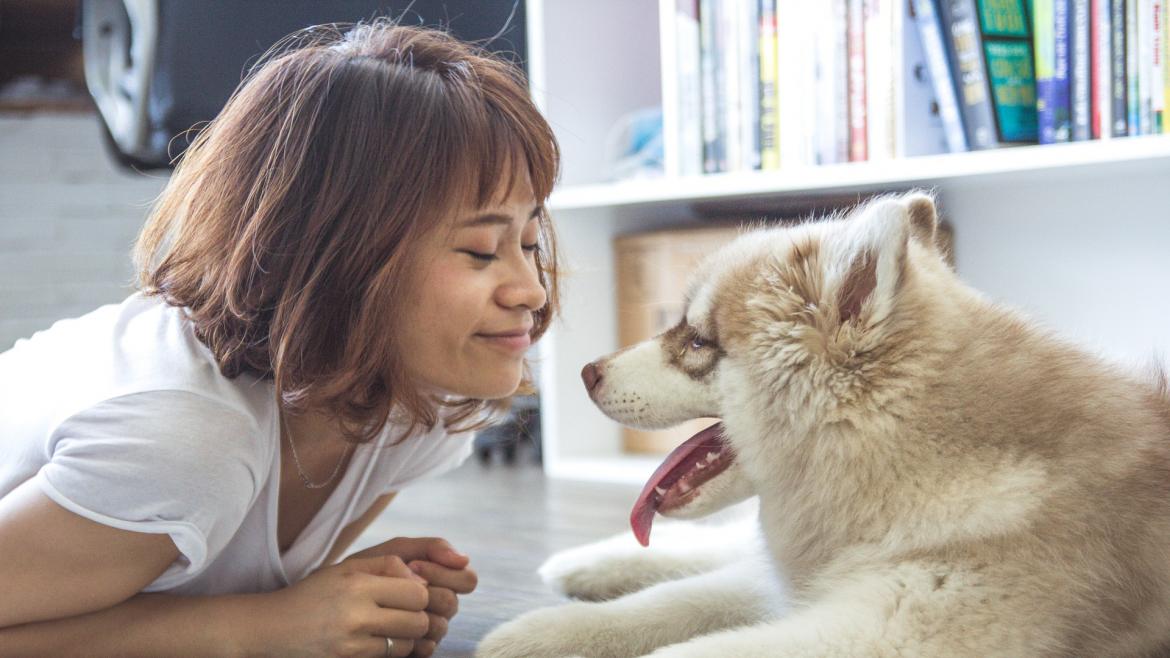 It doesn’t take special insight to recognize dog owners love their dogs. A lot. But the latest episode of ASU Now’s Thought Huddle podcast series digs deeper in an effort to unearth the origin of dogs, explore the purpose of dogs and assess what makes dogs special. Of course, heartwarming stories from dog owners are also part of the mix.

Thought Huddle host Mary-Charlotte Domandi speaks to three dog experts to explore the powerful and poignant human-canine bond. These include Greger Larson, University of Oxford evolutionary biologist; Linda Milanesi, executive director of Assistance Dogs of the West; and Clive Wynne, ASU professor of psychology and author of the forthcoming book "Dog is Love."

Right from the beginning, Domandi confesses her own wild affection for dogs. “Full disclosure: I’m a total dog person. When I was in my 20s and lived in a city where I couldn’t have my own dog, I spent so much time stopping people with dogs on the street that my friend called me Mary ‘Can I pat your dog?’ Charlotte.”

This deep connection between the two species has been forming over thousands of years. How did it happen? While acknowledging there are still many questions about the origins of dogs, Larson offers one “plausible” scenario.

“Wolves are very plastic behaviorally” and “adapt very readily to changing circumstances,” he says. A pack of wolves “started following people because they were able to take advantage of the resources that people provided. But then people were also getting more accustomed to having wolves around as well and recognized that there were certain advantages to having them around. If that’s enough to get things going, what happens from there is this ever-closening relationship between people and wolves that leads to dogs.”

And that relationship includes working together. Milanesi’s organization has trained dogs to provide human assistance of many kinds, particularly for people with disabilities and medical issues. Recently, these purposeful roles have included training dogs to work in the criminal justice system, usually with special victim advocates.

This can mean providing a calming and supportive influence for children who’ve faced sexual assault, domestic violence — “just unspeakable crimes like you cannot imagine,” Milanesi notes. “Looking at a dog at rest, you immediately feel safe.” It “lowers your blood pressure, lowers your cortisone levels, lowers your heart rate.”

This makes sense to Wynne, who studies the human-canine relationship and leads ASU’s Canine Science Collaboratory. “It is actually dogs’ ability to capture our affections and reciprocate our affections … that makes dogs so successful.” Above and beyond any other talents, “the remarkable thing about dogs is their capacity to form strong emotional connections.”