Representation matters. It certainly did for Arizona State University online student Daniel Murillo. When he saw parts of his experience represented on the page, when he encountered writers who were like him, who he really was became … possible. 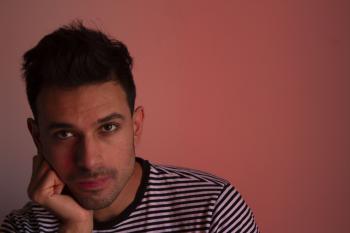 After a conversation with an ASU faculty member, graduating online student Daniel Murillo realized he was too often emulating others in his writing — instead of being himself. "While I still look to my favorite writers for direction," he said, "I am sure to write with my voice, the contemporary voice." Download Full Image

Murillo is earning a BA in English this spring, and has secured a competitive ConversaSpain teaching assistantship postgraduation.

Before his epiphany, Murillo — who identifies as queer and Mexican American — believed that a “writer” was someone like Sylvia Plath or Arthur Rimbaud, maybe Charles Bukowski. In short: white and Eurocentric.

Murillo said he is grateful for the diversity of literature courses he’s taken at ASU. Each area and genre opened up new ways of thinking and being. And it gave him confidence to find his own voice.

Murillo lives in the Los Angeles suburb of Lakewood, California, where he’s participating in ASU’s Starbucks College Achievement Plan. Online education has allowed him to continue working while adding meaningful opportunities like travel experiences — all while keeping up with his studies.

Closer to his home, Murillo added to his resume by interning at the Los Angeles Review of Books, a well-regarded literary supplement covering the national and international book scenes. Murillo wrote, edited and created weekly content for their social media platforms, being instrumental at increasing the review’s levels of engagement.

“This is no surprise,” confirmed Ruby Macksoud, an instructional professional who directs the Department of English’s internship program. “Daniel has an eye for choosing engaging authors, musicians, interviews and images to draw people in. During our many conversations, one thing was clear — he cares deeply about connecting with people. The best part of those conversations? Hearing his excitement about the social impact of his internship work and how much he learned about himself through the process.”

We caught up with Murillo to ask a few more questions about his ASU career and his plans for increasing literary diversity.

Answer: I would say my “aha” moment happened when I came across Allen Ginsberg and David Wojnarowicz my freshman year. These queer men really solidified my desire to study literature and ignited my passion to write. I took a few creative writing workshop courses here at ASU. Being in the company of other writers and being in conversation about literature reinforced my desire and ability to write.

A: I am very thankful for the indigenous poetry, American ethnic literature and sexuality in literature courses that promoted diversity in the literary world. These courses exposed me to a diverse array of writers who aren’t in the mainstream, writers I wouldn’t have come across on my own. As a Mexican-American queer writer, I was really encouraged by these diverse voices. I believe we as a culture have made tremendous progress in the past few years. I do believe, however, we still have a far way to go. I intend to write poetry, essays, even venture into screenwriting about my experience and my communities’ experience.

A: The Starbucks partnership with ASU played a big role in my decision to attend the university. I am very thankful to the company for their generosity and their flexibility. Starbucks was very accommodating with my work schedule, which allowed me to focus on my studies. Online schooling also allowed me to take my studies with me as I traveled. Over the course of my studies, I’ve had the opportunity to travel to France, the Netherlands and Montreal (Canada).

A: I would have to say (former English teaching assistant) Cheyenne Black. I was taking her intermediate poetry workshop course. I attribute her advice as one of the defining moments of finding my artistic voice. I always looked to my favorite writers and thought what would they be writing about in this current climate? What would Rimbaud write about the internet? What would Bukowski write about dating apps? What would Plath write about social media? These topics are altogether trivial and yet so deeply imbedded into our day-to-day life. I was writing with them in mind and not considering my own voice. I had a Google Hangout with professor Black to discuss my poetry. She was very straightforward in her approach and told me to stop using archaic language. While I still look to my favorite writers for direction, I am sure to write with my voice, the contemporary voice.

A: I’m moving to Spain! I applied to be a language assistant for a school year and got the position. I missed creative writing MFA program application deadlines so I decided to use my time well during this gap year and apply what I’ve learned in the field, in a different country! The ultimate goal postgraduation is to write, write, write and get it published.

A: I would tackle the AIDS epidemic. I think it is a big misconception that the AIDS epidemic is over. Sure, we’ve increased awareness. Yes, we have developed effective treatment. But we still have ways to go. I would like to put this money toward further educating people and finding a cure.

Editor’s note: This is part of a series of profiles for spring 2019 commencement.Ethan Barlow’s parents encouraged him to venture away from the familiar surroundings of the state where he’d grown up and experience a new environment during his college years.Barlow recalls being appreciative of that advice as soon as he arrived at Arizona State University.“I fell in love with this school...

Ethan Barlow’s parents encouraged him to venture away from the familiar surroundings of the state where he’d grown up and experience a new environment during his college years. 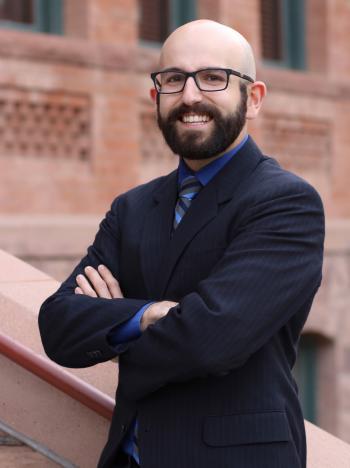 Barlow recalls being appreciative of that advice as soon as he arrived at Arizona State University.

“I fell in love with this school the moment I stepped on campus,” he said. “The people were amazing and I knew I’d found my new home.”

Much of what Barlow contributed to campus life as an undergraduate student helped other students have a positive experience at the university as well. Among the most fulfilling accomplishments of his college career was as a student worker with ASU Admissions Services.

As a freshman, Barlow joined the Student Admissions Relations Team and became the team development coordinator during his sophomore year. As a senior, he was elected as the organization’s student director. During his time in that position, he helped the organization nearly double its membership.

“Being able to help prospective students and their families is beyond rewarding,” Barlow said. “Choosing a college can be a very difficult process, so I am glad I was able to help many families through the initial stages.”

Barlow, who is getting a bachelor's degree in engineering management, found it challenging to keep up with schoolwork while taking on such leadership responsibilities, but says the experience “truly helped me grow a lot as a person” and give him “a family away from home.”

He also attributes much of his personal growth to support from Cheryl Jennings, an industrial engineering lecturer in the School of Computing, Informatics, and Decision Systems Engineering, one of the six Ira A. Fulton Schools of Engineering at ASU.

Barlow served as a teaching assistant for Jennings for three semesters. She also provided valuable mentorship during his junior and senior years.

“She really helped set me on the right path," he said. "She gave me the confidence that I could excel as an engineer.”

Barlow, who will be one of the student speakers at the Fulton Schools spring semester convocation ceremonies, will carry that confidence into his future as he starts his career in a leadership development program at Schneider Electric, a Fortune Global 500 company headquartered in France.

“I have always had a knack for working with people and I have been in a number of leadership positions throughout my college career,” he said. “So being able to continue developing as a young leader at such a great company is a dream come true.”

Barlow has straightforward advice for how fellow students can ensure their own success: Take care of yourself.

“Make sure you spend plenty of time focusing on your own physical and mental health,” he said. “School is hard, so you have to be stable and ready to go so you can give 100% in your schoolwork.”

Read about other exceptional graduates of the Fulton Schools’ spring 2019 class.