As part of the largest academic body at Arizona State University, faculty in The College of Liberal Arts and Sciences interact with students across the university. 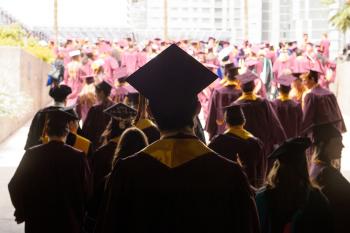 Award recipients will be honored at convocation ceremonies for The College of Liberal Arts and Sciences to be held at 9 a.m. and 2 p.m. Tuesday, May 7, at Wells Fargo Arena in Tempe. Download Full Image

The award series was created in memory of Zebulon Pearce, who graduated from the Territorial Normal School at Tempe, now ASU, with teacher’s credentials in 1899.

“As we continue to evolve, we consistently strive to foster teaching excellence in our academic units,” said Patrick Kenney, dean of The College. “The Zebulon Pearce Distinguished Teaching Awards recognize the esteemed faculty exemplifying that aspiration.”

Faculty from each of The College’s divisions were chosen for the teaching awards. In addition, The College recognized two faculty members for exceptional lecturer and change-maker.

Cerveny, a professor in The College’s School of Geographical Sciences and Urban Planning, is the 2019 recipient of the Zebulon Pearce Distinguished Teaching Award in the social sciences.

His ASU career spans more than three decades and includes numerous teaching accolades for contributions made to undergraduate education, including the prestigious President’s Professor designation in 2005. He is also an affiliate faculty member at ASU’s Urban Climate Research Center and the director of the meteorology program at The College.

Cerveny said the award is a testament to The College’s long-standing commitment to spotlight teaching achievements.

“I am quite honored to receive this award, but frankly, the credit actually belongs to my unit, which has always had an incredibly strong commitment to teaching and the community at large,” Cerveny said. “I am fortunate to have had, and continue to have, some of the best students from around the world select meteorology as their major, so if I have contributed in even a small part to their great and varied successes, I am very proud and humbled.”

Schermerhorn, who came to ASU in 2008, is a professor in the School of Historical, Philosophical and Religious Studies and also serves as the school’s assistant director of undergraduate studies. He is the 2019 recipient of the Zebulon Pearce Distinguished Teaching Award in the humanities.

His research and courses focus on the history of slavery, capitalism and African American inequality. As an academic adviser, he works with graduate students and students from Barrett, The Honors College at ASU.

Schermerhorn said the Zebulon Pearce recognition was an honor shared by engaged students whose questions facilitate vibrant class discussions. He also said fellow professors had been vital mentors, including T. J. Davis and Donald Fixico, both professors in the School of Historical, Philosophical and Religious Studies, and the late Rachel Fuchs, who taught French women’s history for many years at ASU.

“One of the keys to teaching that my mentors gave was to treat each student who enters the classroom as a peer and person whose future matters vitally,” he said. “ASU’s charter broadens that commitment, since we measure ourselves by whom we include and how well they succeed.”

Jones is an associate professor and the associate director of academic affairs in the School of Molecular Sciences. She is the recipient of the 2019 Zebulon Pearce Distinguished Teaching Award in the natural sciences.

She has been at the helm of several innovations within that realm since joining ASU in 2007. During the development of ASU’s Global Freshman Academy, she built a massive online course (MOOC) in general chemistry for engineers that focused on contextualization and active learning principles. She also played a key role in forging the first online biochemistry degree in the country. Since its launch two years ago, it has drawn over 650 majors and offered a pathway to those who are passionate about medical and science research fields but unable to pursue the path in a traditional classroom setting. Her latest venture seeks to redesign general chemistry courses to serve a wider range of students at ASU.

Jones said the award offered validation that her efforts had made a mark on her students and academic peers at ASU.

“I am particularly excited to receive this award in a year in which another recipient, Ron Briggs, is also in the School of Molecular Sciences,” she said. “I hope our shared successes draw people's attention to the wonderful teaching innovations happening broadly in chemistry and biochemistry at ASU.”

Briggs is a principal lecturer in the School of Molecular Sciences and recipient of the 2019 Outstanding Lecturer Award.

He began teaching large-enrollment general chemistry lectures and physical chemistry lab courses upon joining ASU in 2004. He now manages general chemistry and teaching assistantship programs. Within that role, he has overseen the creation of new active-learning formats, innovative classroom designs and shifts in instructional staffing, all of which he said have increased student success and retention.

This is the second year Briggs has garnered the esteemed lecturer award, an accolade he said was especially humbling because nominations are made by students themselves. He also praised The College’s innovative approach to creating learning spaces that transcend traditional classroom models.

“Early in my career, the ideas of incorporating active-learning and inquiry-based activities into the general chemistry curriculum were not only unpopular, they were criticized as being a waste of time and not worth investing in,” he said. “ASU responded by providing our team with support and encouragement to build a new collaborative learning center and fundamentally change the way we teach our 100-level courses.”

Davis is a concurrent professor in the Hugh Downs School of Human Communication and the Southwest Interdisciplinary Research Center whose work focuses on enhanced communication as a means of improving the health and well-being of underserved populations. She is the 2019 recipient of the Gary S. KrahenbuhlThe award was established in honor of Krahenbuhl, a former dean of The College known for spurring positive change at ASU, and recognizes a faculty member whose work demonstrates the same spirit. Difference Maker Award.

Inside and outside the classroom, Davis’ work exemplifies the merging of academia and public service that is encouraged by the ASU charter.

As a community health leader, she helped forge a health coalition for refugee women in Maricopa County and was appointed by former Arizona Gov. Janet Napolitano to serve on the State Commission on Women’s and Children’s Health.

She has also partnered with the Phoenix-based Coalition of Blacks Against Breast Cancer to produce a narrative play titled, "The Journey: Living Cancer Out Loud," which depicts the complexities of cancer and is based on interviews with African American survivors and caregivers of the disease.

“This award means so much to me,” Davis said. “It affirms my community-based participatory research efforts in making a difference in the health lives of African American men and women, and illuminates The College's recognition of and commitment to the importance of community research collaborations.”

Award recipients will be honored at convocation ceremonies for The College of Liberal Arts and Sciences to be held at 9 a.m. and 2 p.m. Tuesday, May 7, at Wells Fargo Arena in Tempe.

The School of Social Transformation is excited to announce that Pardis Mahdavi has been named its new director.Mahdavi is an accomplished social scientist with a strong leadership track record. She served as chair of anthropology, director of the Pacific Basin Institute and dean of women at Pomona College. And, most recently, she was acting dean of the Josef Korbel School of International Studies ...

The School of Social Transformation is excited to announce that Pardis Mahdavi has been named its new director.

Mahdavi is an accomplished social scientist with a strong leadership track record. She served as chair of anthropology, director of the Pacific Basin Institute and dean of women at Pomona College. And, most recently, she was acting dean of the Josef Korbel School of International Studies at the University of Denver. 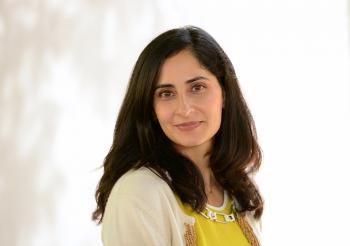 “Pardis Mahdavi will make a strong director of SST thanks to her combination of administrative style, leadership skills and scholarly reputation,” said Krista Ratcliffe, professor and chair of ASU’s Department of English, who served as chair of the hiring committee. “She is welcoming as well as insightful and incisive, with the ability to form direct and concise responses in terms of both concepts and concrete examples.” Speaking specifically to Mahdavi’s managerial and leadership acumen, Ratcliffe added, “She also has proven strengths in budgeting, conflict negotiation, defining visions, growing majors and building community partnerships, including fundraising.”

As a scholar and anthropologist, Mahdavi’s research focuses on societal issues including human trafficking, migration, human rights, sexuality and transnational feminism. And she has published extensively on these topics. “Her prolific scholarly record has garnered her an international reputation as a scholar and a public intellectual whose values fit well within SST,” said Ratcliffe.

Commenting on her recent appointment, Mahdavi explained, “I was so drawn to SST because it is such a unique school that truly lives into the values of intentionality, intersectionality, interdisciplinarity and inclusion. This is truly the school so many of us have been waiting for.”

When she assumes her new role on July 1, Mahdavi succeeds President’s Professor Bryan McKinley Jones Brayboy, who has served as the school’s interim director for the past year.

“Pardis Mahdavi is a lovely choice to be our next school director,” Brayboy said. “She is an accomplished academic who is internationally respected for her work in the Middle East and around human trafficking. She is a seasoned leader with great experience as an administrator. She also happens to be visionary in ways that enhance and facilitate success in our school. In short, she embodies what our leaders need to be successful: strong academic credentials and accomplishments, great management skills and innovative ideas. I'm thrilled for us!”

Brayboy recently reflected on his time leading the school:

“SST is a vibrant place, focused on addressing significant social issues, guided by larger questions of justice. It means that our students, staff and faculty are laser-focused on addressing the challenges and creating, with community partners, solutions to the challenges. My experience as the interim director has been filled with moments of awe, wonder and curiosity as I watch our school community do their important work. This is challenging — and meaningful! — work framed by long hours of trying to facilitate the many efforts of our faculty, staff and students.”

Although Brayboy occupied the director role for the past year in an interim capacity, the two leaders who have served officially as director at SST since its inception in 2009 have been women. Mahdavi’s arrival makes her the third woman to lead the school. And she’s joining ASU alongside two other new leadership additions within the social sciences in The College of Liberal Arts and Sciences.