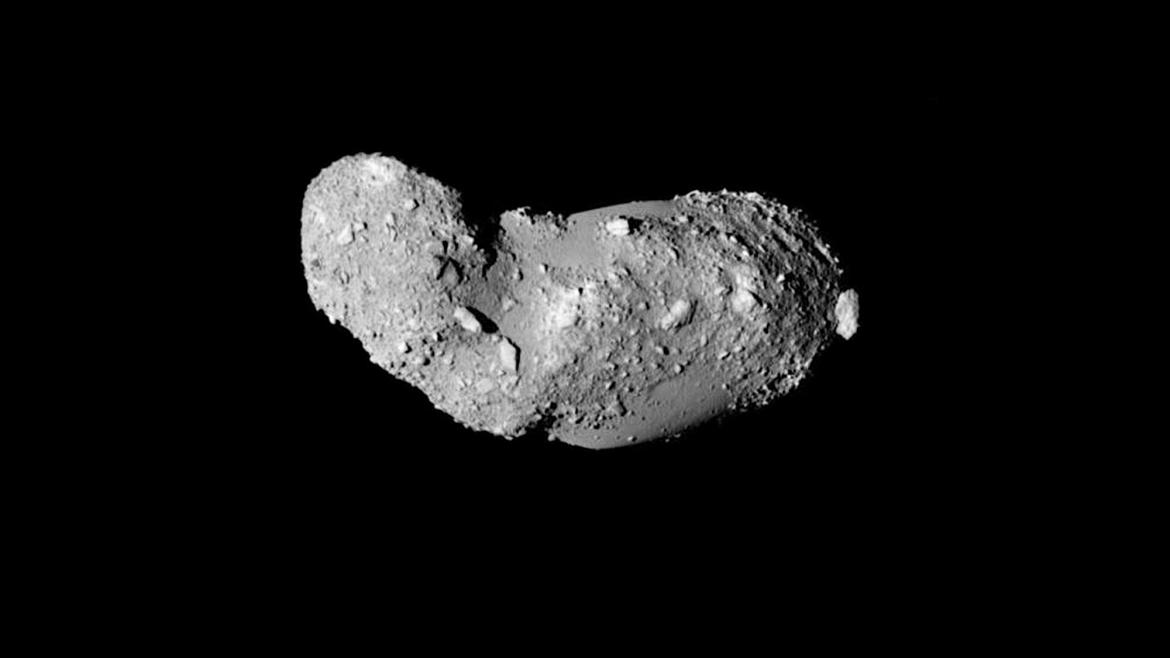 Two cosmochemists at Arizona State University have made the first-ever measurements of water contained in samples from the surface of an asteroid. The samples came from asteroid Itokawa and were collected by the Japanese space probe Hayabusa.

The team's findings suggest that impacts early in Earth's history by similar asteroids could have delivered as much as half of our planet's ocean water.

"We found the samples we examined were enriched in water compared to the average for inner solar system objects," Ziliang Jin said. A postdoctoral scholar in ASU's School of Earth and Space Exploration, Jin is the lead author on the paper published May 1 in Science Advances reporting the results. His co-author is Maitrayee Bose, assistant professor in the school.

"It was a privilege that the Japanese space agency JAXA was willing to share five particles from Itokawa with a U.S. investigator," Bose said. "It also reflects well on our school."

The team's idea of looking for water in the Itokawa samples came as a surprise for the Hayabusa project.

"Until we proposed it, no one thought to look for water," Bose said. "I'm happy to report that our hunch paid off."

In two of the five particles, the team identified the mineral pyroxene. In terrestrial samples, pyroxenes have water in their crystal structure. Bose and Jin suspected that the Itokawa particles might also have traces of water, but they wanted to know exactly how much. Itokawa has had a rough history involving heating, multiple impacts, shocks and fragmentation. These would raise the temperature of the minerals and drive off water.

To study the samples, each about half the thickness of a human hair, the team used ASU's Nanoscale Secondary Ion Mass Spectrometer (NanoSIMS), which can measure such tiny mineral grains with great sensitivity.

The NanoSIMS measurements revealed the samples were unexpectedly rich in water. They also suggest that even nominally dry asteroids such as Itokawa may in fact harbor more water than scientists have assumed.

The samples studied by Jin and Bose came from the feature called the Muses Sea, which is the smooth area in the middle of Itokawa. 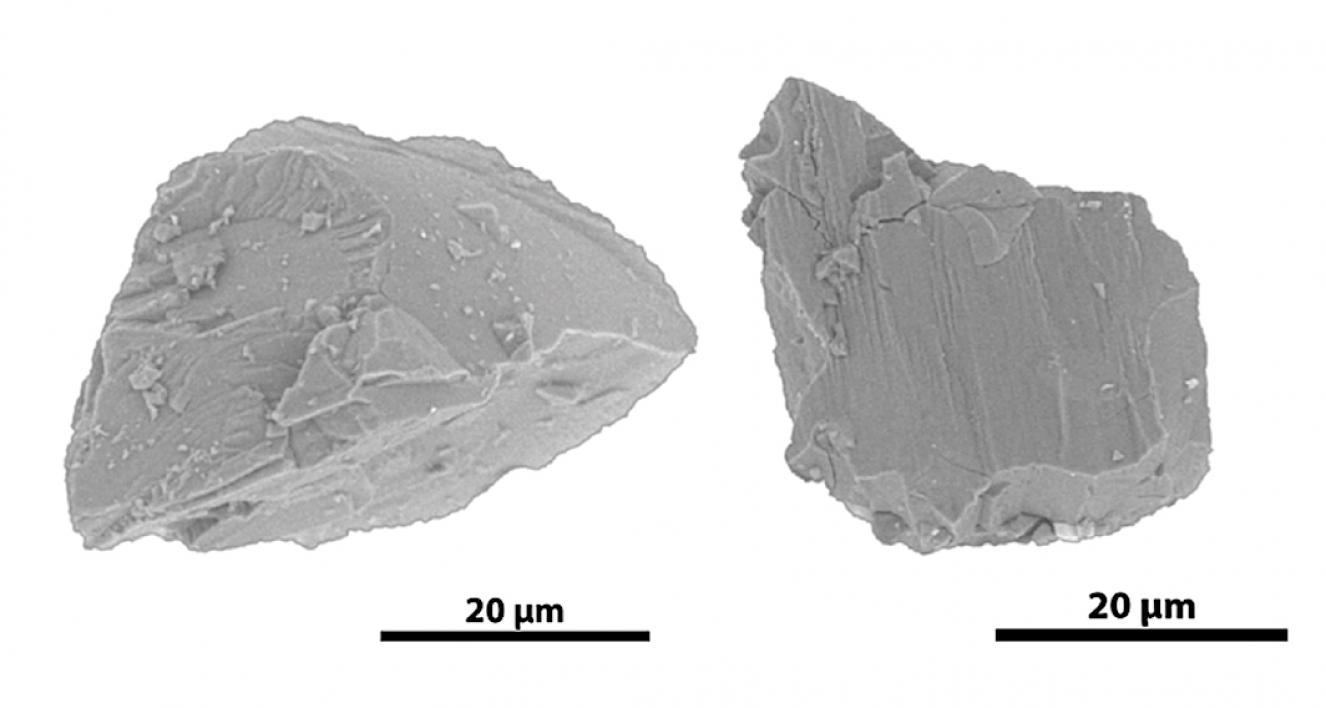 The two Itokawa particles studied by Jin and Bose are tiny: for comparison, a human hair is 100 to 500 microns in diameter. ASU's NanoSIMS instrument made it possible to extract information on the particles' water content. 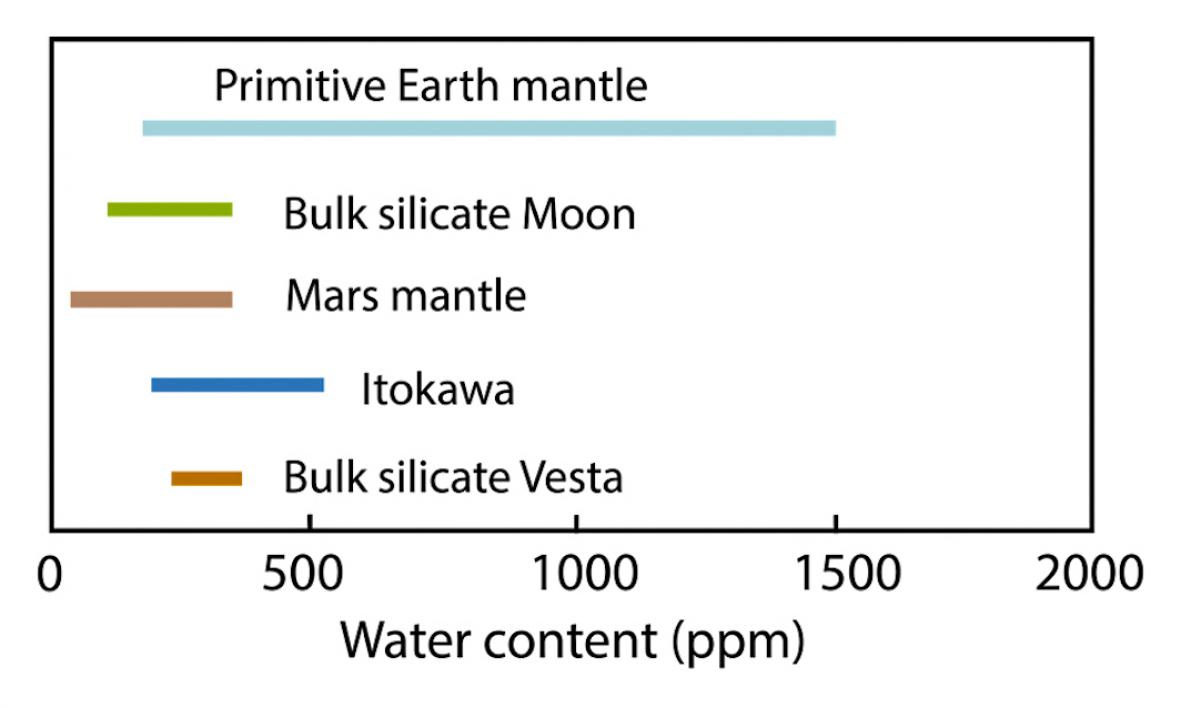 When scientists compare the water content (in parts per million, ppm) for Earth's mantle and solar system bodies, it shows that Earth is water-rich and so is Itokawa. Earth may have received its water through impacts by asteroids during the first 10 million years of solar system history. The new study shows that Itokawa-like bodies may have provided at least half of Earth's oceans. Ziliang Jin (left) and Maitrayee Bose prepare Itokawa samples for analysis at ASU. Bose is building a clean-lab facility at ASU, which together with the NanoSIMS instrument would be the first such facility at a public university capable of analyzing dust grains from solar system bodies.

Itokawa is a peanut-shaped asteroid about 1,800 feet long and 700 to 1,000 feet wide. It circles the sun every 18 months at an average distance of 1.3 times the Earth-sun distance. Part of Itokawa's path brings it inside Earth's orbit, and at farthest, it sweeps out a little beyond that of Mars.

Based on Itokawa's spectrum in Earth-based telescopes, planetary scientists place it in the S class. This links it with the stony meteorites, which are thought to be fragments from S-type asteroids broken off in collisions.

"S-type asteroids are one of the most common objects in the asteroid belt," Bose said. "They originally formed at a distance from the sun of one-third to three times Earth's distance." She adds that although they are small, these asteroids have kept whatever water and other volatile materials they formed with.

In structure, Itokawa resembles a pair of rubble piles crunched together. It has two main lobes, each studded with boulders but having different overall densities, while between the lobes is a narrower section.

Jin and Bose point out that today's Itokawa is the remnant of a parent body at least 12 miles wide that at some point was heated between 1,000 and 1,500 degrees Fahrenheit. The parent body suffered several large shocks from impacts, with one final shattering event that broke it apart. In the aftermath two of the fragments merged and formed today's Itokawa, which reached its current size and shape about 8 million years ago.

"The particles we analyzed came from a part of Itokawa called the Muses Sea," Bose said. "It's an area on the asteroid that's smooth and dust-covered."

Jin added, "Although the samples were collected at the surface, we don't know where these grains were in the original parent body. But our best guess is that they were buried more than 100 meters deep within it."

He adds that despite the catastrophic breakup of the parent body, and the sample grains being exposed to radiation and impacts by micrometeorites at the surface, the minerals still show evidence of water that has not been lost to space.

In addition, "The minerals have hydrogen isotopic compositions that are indistinguishable from Earth," Jin said.

"This means S-type asteroids and the parent bodies of ordinary chondrites are likely a critical source of water and several other elements for the terrestrial planets," Bose explained.

She added, "And we can say this only because of in-situ isotopic measurements on returned samples of asteroid regolith — their surface dust and rocks.

"That makes these asteroids high-priority targets for exploration."

Bose notes that she is building a clean-lab facility at ASU, which along with the NanoSIMS (partially funded by National Science Foundation) would be the first such facility at a public university capable of analyzing dust grains from other solar system bodies.

Another Japanese mission, Hayabusa 2, is currently at an asteroid named Ryugu, where it will collect samples, bringing them back to Earth in December 2020. The director of ASU's Center for Meteorite Studies and newly selected director of the School of Earth and Space Exploration, Professor Meenakshi Wadhwa, is a member of the Initial Analysis team for Chemistry for the Hayabusa 2 mission.

ASU is also on board NASA's OSIRIS-REx sample-return mission, which is orbiting a near-Earth asteroid named Bennu. Among other instruments, the spacecraft carries the OSIRIS-REx Thermal Emission Spectrometer (OTES), designed by ASU Regents' Professor Philip Christensen and built at the school. OSIRIS-REx is scheduled to collect samples from Bennu in summer 2020 and bring them back to Earth in September 2023.

For planetary scientists and cosmochemists who are drawing a picture of how the solar system formed, asteroids are a great resource. As leftover building blocks for the planetary system, they vary greatly among themselves while preserving materials from early in solar system history.

"Sample-return missions are mandatory if we really want to do an in-depth study of planetary objects," Bose said.

"The Hayabusa mission to Itokawa has expanded our knowledge of the volatile contents of the bodies that helped form Earth," she added. "It would not be surprising if a similar mechanism of water production is common for rocky exoplanets around other stars."

Editor’s note: This is part of a series of profiles for spring 2019 commencement.In a ceremony held on April 17 by Big Brothers Big Sisters of Central Arizona, Hsiao-Ya (Sofia) Chen, a graduating senior from the T. Denny Sanford School of Social and Family Dynamics, was awarded the Big Thanks Award for her role as volunteer mentor.Chen, who will earn a bachelor’s degree in family and huma...

Tempe campus , School of Earth and Space Exploration , The College of Liberal Arts and Sciences , Center for Meteorite Studies

In a ceremony held on April 17 by Big Brothers Big Sisters of Central Arizona, Hsiao-Ya (Sofia) Chen, a graduating senior from the T. Denny Sanford School of Social and Family Dynamics, was awarded the Big Thanks Award for her role as volunteer mentor. Chen, who will earn a bachelor’s degree in family and human development with a minor in sociology, was selected from over 1,100 volunteers by her program specialist to receive this special award.

Big Brothers Big Sisters helps children realize their potential and build their futures by nurturing children and strengthening communities. They accomplish this by providing children facing adversity with strong and enduring, professionally supported one-to-one relationships (mentors) that change their lives for the better, forever.

According to Big Brothers Big Sisters' promotional resources, children who have a mentor are:

• More likely to volunteer in their community.

• Less likely to use drugs and alcohol.

• More likely to participate in extracurricular activities and sports.

It was outcomes like these that drove Chen to apply with Big Brothers Big Sisters as a volunteer mentor. Having a somewhat troubled childhood of her own, Chen has overcome much adversity in her life, which has given her a passion for giving back to others by serving in a variety of volunteer capacities.

She joined Big Brothers Big Sisters in 2016 and waited nearly two years before her mentee match was made. But waiting two years for the perfect match didn’t stop her from giving back, volunteering with both Arizonian’s for Children and Southwest Human Development until her match was made.

In January 2018, Chen received news of her Big Brothers Big Sisters mentee match. She was delighted to learn she had been matched with a 12-year-old girl, whom she would mentor over the next year and a half. While they shared similar childhood experiences, Chen had a unique opportunity to see her family and human development studies play out right in front of her.

“It was very interesting and rewarding to see this little girl go through life transitions that I’ve been studying, like puberty and becoming a teenager,” Chen said. 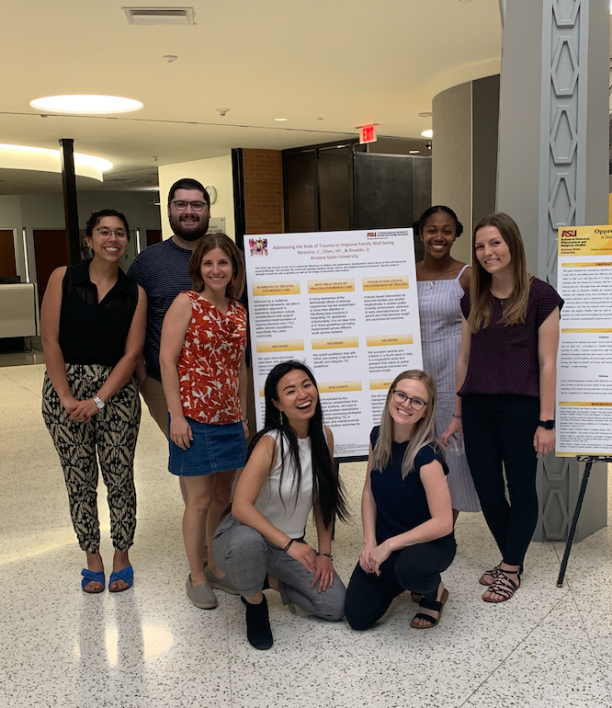 Chen at the famed Red Rocks Amphitheatre during her campus visit to the University of Denver.

“Occasionally I would prepare a picnic for my mentee, exposing her to some food from my home country, like Taiwanese pancakes. I told her the Mandarin name for the food only once or twice, and weeks later she would ask me when we could have more of the pancakes, referring to them in the native language,” Chen said. “Those are the little things that made me happy.”

Her desire to serve others, like that of her mentee, has also translated to great success for Chen within ASU’s Sanford School.

“Sofia Chen is passionate about helping children and families — she shows this through her work with the Child Development Lab, her involvement in BBBS, and her work in the PEACPositive Environments for Adolescents and Children lab designing interventions to support parenting for children exposed to trauma,” PEAC lab Assistant Professor Sarah Lindstrom Johnson said.

Upon graduating from ASU this May, Chen will continue her studies after being accepted to the University of Denver Graduate School of Social Work. She has also decided to defer her graduate school start until 2020 so she may move to Denver and spend a year working in the community. She hopes to continue her service to youth and families with locally based Shiloh House. She also intends to stay in contact with her Big Brothers Big Sisters mentee for years to come.