Among a sea of aspiring actors dressed in black and lined up at an open call audition, Tregoney Shepherd wore a bright red miniskirt. Whether the skirt helped or hurt her chances, she’s unsure — but soon after she was whisked onto the “Les Misérables” Broadway stage. 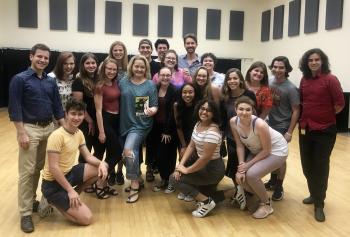 “I love ASU and I’m thankful for it because I feel like the program was very nurturing, encouraging, open to different ideas and provided me with performance opportunities that I wouldn’t have had otherwise,” Shepherd said.

She recounted some of her own blunders and offered words of wisdom to current ASU musical theatre students on April 25. From treating every audition or dress rehearsal like a full performance and knowing who’s in the room, she shared lessons she often learned the hard way.

She said the lack of information she had as she approached the Broadway industry is part of the reason why she enjoys helping younger aspiring actors.

“As much as you are training and taking class, you don’t have the exposure,” Shepherd said. “Then you go and you have to figure out how to do it. So I like to be able to share my experiences with people so that they can understand that nothing is perfect — there’s no perfect way to do it. Everybody’s path is completely different.”

Shepherd also said she particularly loved her experience at ASU because her creativity was never diminished, and she was able to pursue many of her own ideas.

Ultimately, she said that just because some students couldn’t afford musical theater summer workshops like some families, it not essential in starting a theater career.

“With persistence and hard work and desire, you can have all of that,” she said.

On a recent sunny Saturday at Arizona State University, the Tempe campus was buzzing with middle and high schoolers in lab coats and goggles, sprinting between buildings and labs.The students were taking part in the state competition of the Arizona Science Olympiad on April 6. This is the third year that the event has been held at ASU, showcasing science, technology, engineering and math fields as...

On a recent sunny Saturday at Arizona State University, the Tempe campus was buzzing with middle and high schoolers in lab coats and goggles, sprinting between buildings and labs.

The students were taking part in the state competition of the Arizona Science Olympiad on April 6. This is the third year that the event has been held at ASU, showcasing science, technology, engineering and math fields as well as campus life to young students. 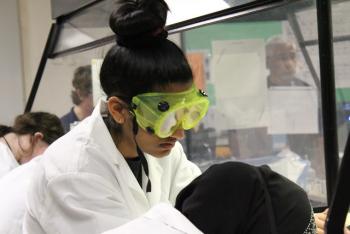 A totoal of 66 teams from middle and high schools around the state competed in 23 events at the state competition. Winners will advance to the national competition in June at Cornell University in Ithaca, New York. The team from University High School in Tucson won the high school division, and the team from Paragon Science Academy in Chandler won the middle school division.

Reina Gomez, state director for Arizona Science Olympiad, said that the event is an opportunity for students who excel academically to get awards, medals and trophies that are usually awarded in athletic events.

She also said that having the event, presented with Access ASU, at the university allows the students to become familiar with the campus and college in general.

Nikita Kumari, a fourth-year PhD student at ASU studying biophysical chemistry, hopes to teach after graduation. She facilitated one of the chemistry activities where students tested the pH levels of household liquids like Sprite and mouthwash.

“It’s interesting because I get to see high school students excited about science, and that is fun for me,” Kumari said.

Students were all smiles at the herpetology activity that featured live snakes, geckos and tortoises.

Marshall Frank, an eighth grader from Prescott Valley, said that he likes the Olympiad because of the different events.

“No matter what field of science you’re into, there’s always something for you to do here,” Marshall said.

Lorenzo Chavez, assistant vice president for outreach at ASU said that the university is proud to have a legacy of presenting the event.

“ASU is excited to host the state science olympiad tournament for the third year in a row because the event exemplifies the innovation and creativity that the institution prides itself on,” Chavez said.

“The students attending are some of the best and brightest in the state of Arizona, and it is an honor to be part of this special day. As an institution that is dedicated to the Arizona community, we see our support for the event as an opportunity to connect participants to the university, faculty and staff.”