On Monday, April 22, the School of Molecular Sciences recognized graduate student David Ciota with the 2019 SMS Innovation Award at the Annual Awards Ceremony. The award is given to a graduate student for excellence in achieving the School of Molecular Sciences' mission of discovering molecular-level solutions to real-world challenges through the pursuit of methodology or development of research ideas or inventions. 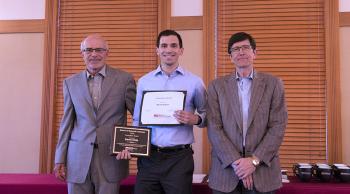 “It has been about six months since he joined my research lab and yet he has been very productive, with one new invention and excellent research results for multiple publications,” said Don Seo, professor at the School of Molecular Sciences and Biodesign Center for Molecular Design and Biomimetics. “He has aspired to start a new chemical company of his own after graduation.”

After Ciota graduates, he would like to move into industry and continue his research career for a few more years. After that, he hopes to transition into a business and product development role where he can help advance research ideas and concepts into fully commercialized products that benefit society.

"As a PhD student, my goal is to expand my knowledge of materials chemistry and gain the skills necessary to become an independent researcher. I also hope to develop business and product development skills that will allow me to transition easily into a role in industry,” Ciota said. “I believe that applying for and winning the Innovation Award, as well as the experiences that come from it, will help me greatly in this regard.”

This award will recognize annually the most significant invention or research idea by a graduate student — or student team — in one of the six primary research areas of the school on a rotating basis. The first award in the area of assembly, materials and nanoscience was presented by Emeritus Professor William Glaunsinger. The award consists of a $1,000 cash prize, access to expert entrepreneurial assistance to develop the research idea/invention, along with a commemorative plaque. Ciota is eligible to receive additional grant funds to advance his invention after a Skysong Innovations evaluation.

“There were six candidates for this award, which recognizes the most significant invention demonstrating excellence in one of the school’s six primary research areas," Glaunsinger said. "We hope that this award will stimulate graduate students to identify the most innovative aspects of their research and its potential applications.”

“This year’s award had many innovative individuals or groups who applied,” Woodbury said. “We hope to encourage more graduate students to think about their research work and applying it to possible real world applications."

More information about the Innovation Award.

Intensive investigations into the nature of cancer have given rise to innovative and unorthodox approaches to countering this deadly affliction. A recent and exciting avenue of cancer treatment involves targeting malignant cells with specialized viruses that can kill cancer cells while ignoring healthy tissue, a technique known as “oncolytic virotherapy.”The process involves administering an o...

Intensive investigations into the nature of cancer have given rise to innovative and unorthodox approaches to countering this deadly affliction. A recent and exciting avenue of cancer treatment involves targeting malignant cells with specialized viruses that can kill cancer cells while ignoring healthy tissue, a technique known as “oncolytic virotherapy.”

The process involves administering an oncolytic virus, which infects and breaks down cancer cells but does not harm healthy self-cells. This therapy may be administered alone or in conjunction with other common therapies like radiation or chemotherapy drugs. 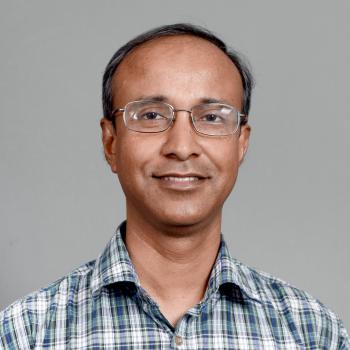 Masmudur Rahman is an associate research professor for the Biodesign Center for Immunotherapy, Vaccines and Virotherapy. Download Full Image

One particular virus, known as myxoma, has shown significant promise, due to its highly selective nature. When introduced into a tumor, myxoma destroys cancer cells but is harmless to healthy neighboring cells. An oncolytic virus of this type, should its cancer-fighting capacity hold up in clinical trials, offers a silver-bullet for cancer, unlike traditional treatments including radiation and chemotherapy, which often kill both cancer cells and healthy cells indiscriminately.

Myxoma virus is one of the best documented cases of host-virus coevolution. The natural target of the virus is the European rabbit, in which it causes myxomatosis, a lethal disease. In humans, however, the virus is harmless, except when it encounters a cancer cell. A thorough understanding of myxoma’s lethal affinity for cancer is still something of a puzzle and much additional research into the virus’ cancer-terminating nature is needed.

In a recent study published by the Journal of Clinical Investigation, the myxoma virus was used to treat small-cell lung cancer (SCLC) in a genetically engineered mouse (GEM) model. SCLC is characterized by a high incidence in the U.S. and a low five-year survival rate that is not much improved by common therapies, making it the perfect candidate for testing the efficacy of oncolytic virotherapy.

Biodesign researchers Masmudur Rahman, an associate research professor for the Biodesign Center for Immunotherapy, Vaccines and Virotherapy, and Grant McFadden, the center director and a professor in the School of Life Sciences, collaborated with University of Florida to tackle this project.

“I have been studying myxoma virus biology and use of myxoma virus for cancer treatment for more than 12 years,” Rahman said. “When we were at University of Florida, we were looking for genetically engineered mouse cancer models that we can use for testing myxoma virus oncolytic virotherapy. We found that the lab of Zajac-Kaye and Frederic Kaye had developed the lung cancer model described in the paper and then we started collaborating with them.”

Although oncolytic therapy — a hot topic in cancer research — has gained a significant amount of traction, this is the first report of testing a GEM mouse model with SCLC.

“The virus propagated within the lung tumor tissues, but not in normal lung tissues, and induced a localized immune response to the virus-infected tumor beds that cleared the virus within a week of the infection and also caused a prolongation of life.”

The researchers also combined myxoma virus with a standard drug used to treat SCLC in human patients, like cisplatin. This further increased the survival rate and the overall immune response to the tumor.

This study showed that in addition to myxoma virus being capable of inducing immune cell infiltration, it also yields very little toxicity.

“SCLC tumors are immunosuppressive, so based on our observation that myxoma virus not only kills the tumor cells, but also recruits the immune cells in the tumor bed, we think myxoma virus will be a better therapeutic than the current therapies,” Rahman said. “Oncolytic virus mediated therapy has less or no toxicity to the normal cells than the traditional treatments.”

Although researchers were able to reinforce the validity of oncolytic virotherapies in treating cancers alone and with other common drugs, there are more studies to be done.

“Our next step is to test different armed myxoma virus constructs that will further increase the recruitment of immune cells in the tumor bed,” Rahman added. “We also like to test myxoma virus in combination with immune checkpoint inhibitors.”

These studies are conducted in the hope that these therapies could one day mediate hard-to-treat cancers in humans. Findings such as these could further these efforts.

“A new company called OncoMyx is currently being launched in Phoenix to test next-generation armed myxoma virus constructs in human clinical trials against a variety of human cancers, including lung cancer,” McFadden said.