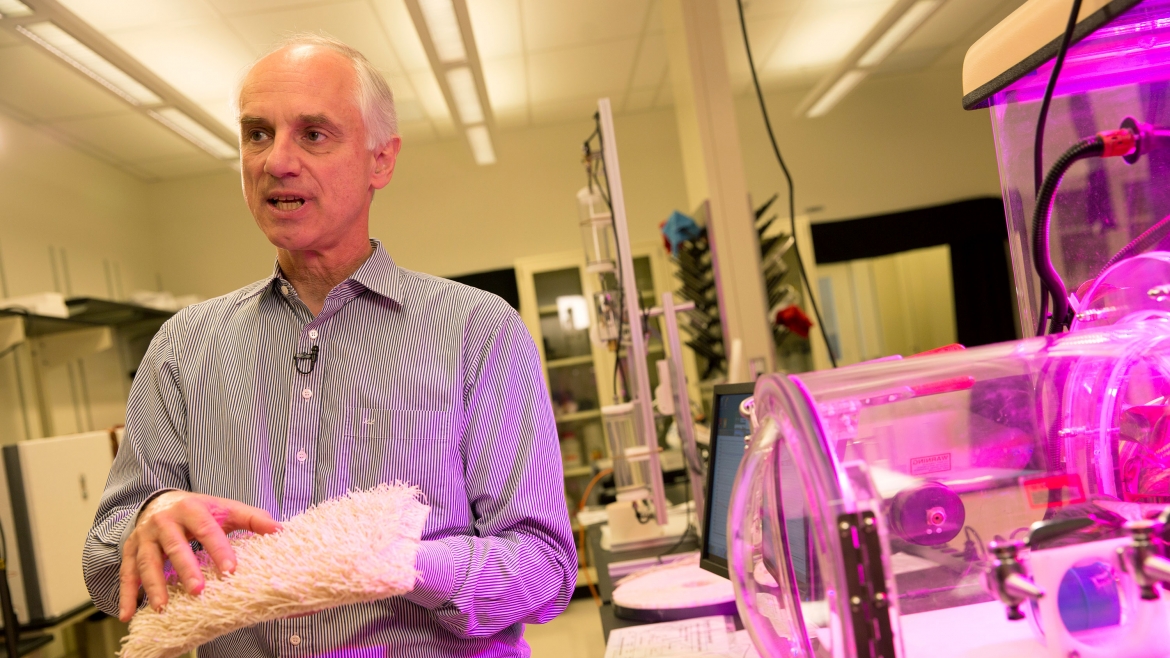 The proprietary technology acts like a tree that is thousands of times more efficient at removing CO2 from the air. The “mechanical trees” allow the captured gas to be sequestered or sold for re-use in a variety of applications, such as synthetic fuels, enhanced oil recovery or in food, beverage and agriculture industries.

Unlike other carbon-capture technologies, SKH’s technology can remove CO2 from the atmosphere without the need to draw air through the system mechanically using energy-intensive devices. Instead, the technology uses the wind to blow air through the system. This makes it a passive, relatively low-cost and scalable solution that is commercially viable. If deployed at scale, the technology could lead to significant reductions in the levels of CO2 in Earth’s atmosphere, helping to combat global warming.

“The situation has gotten to the point where we need to stop talking about it and start doing something about it,” said Lackner, an ASU engineering professor in the School of Sustainable Engineering and the Built Environment. “Carbon dioxide is a waste product we produce every time we drive our cars or turn on the lights in our homes. Our device can recycle it, bringing it out of the atmosphere (to) either bury it or use it as an industrial gas,” added Lackner, who will serve as the chief scientific adviser to SKH.

The “mechanical tree” is a novel geometry that is agnostic to wind direction. Each one contains a stack of sorbent-filled disks. When the tree-like column is fully extended and the disks spread apart, air flow makes contact with the disk surfaces and the CO2 gets bound up. During regeneration, the disks are lowered inside the bottom container. Inside the chamber, the CO2 is released from the sorbent. The released gas is then collected, purified, processed and put to other uses, while the disks are redeployed to capture more CO2.

Until now, technologies being developed to capture CO2 from the air have been constrained by the cost of capture and the ability to harvest the gas at scale. The technology being deployed by SKH addresses both issues, bringing the cost of capture comfortably below $100 per metric ton at scale — the lowest in the industry — making it both commercial and impactful toward reducing global warming.

SKH plans to deploy clusters of column-shaped devices, or mechanical trees. A cluster comprises 12 columns and can remove 1 metric ton of CO2 per day. SKH will deploy the technology in a pilot CO2 farm targeting 100 metric tons per day of CO2. The technology will then be deployed to full-scale CO2 farms in multiple locations, each capable of removing 3.8 million metric tons of CO2 annually.

SKH holds the exclusive rights to the technology and comprises a group of leading individuals from business and science, including Lackner. Through the relationship with Arizona State University, SKH will support ASU research and ASU owns an interest in shares of SKH.

“Our goal is to accelerate the global climate effort set out in the Paris Agreement to contribute to reversing global carbon emissions in the next 10 to 15 years,” said Pól Ó Móráin, chief executive officer of SKH. “Our passive process is the evolution of carbon-capture technology, which has the ability to be both economically and technologically viable at scale in a reasonably short time frame."

“The development of Klaus Lackner’s carbon-capture device is but one example of how ASU is developing novel technologies and business opportunities to improve the environment and ensure a healthy Earth for all well into the future,” said Peter Schlosser, vice president and vice provost for Global Futures at ASU. “We are excited to be working with SKH to bring this important technology for limiting global warming to market.”

Top photo by Ira A. Fulton Schools of Engineering

Editor’s note: This is part of a series of profiles for spring 2019 commencement. Working in an ensemble theater that has a focus on civic dialogue turned out to be a useful background for Courtney Davis when she decided to pursue a master’s degree in interior architecture at Arizona State University. “Our company does a lot of engagement and we do unconventional work, in different... 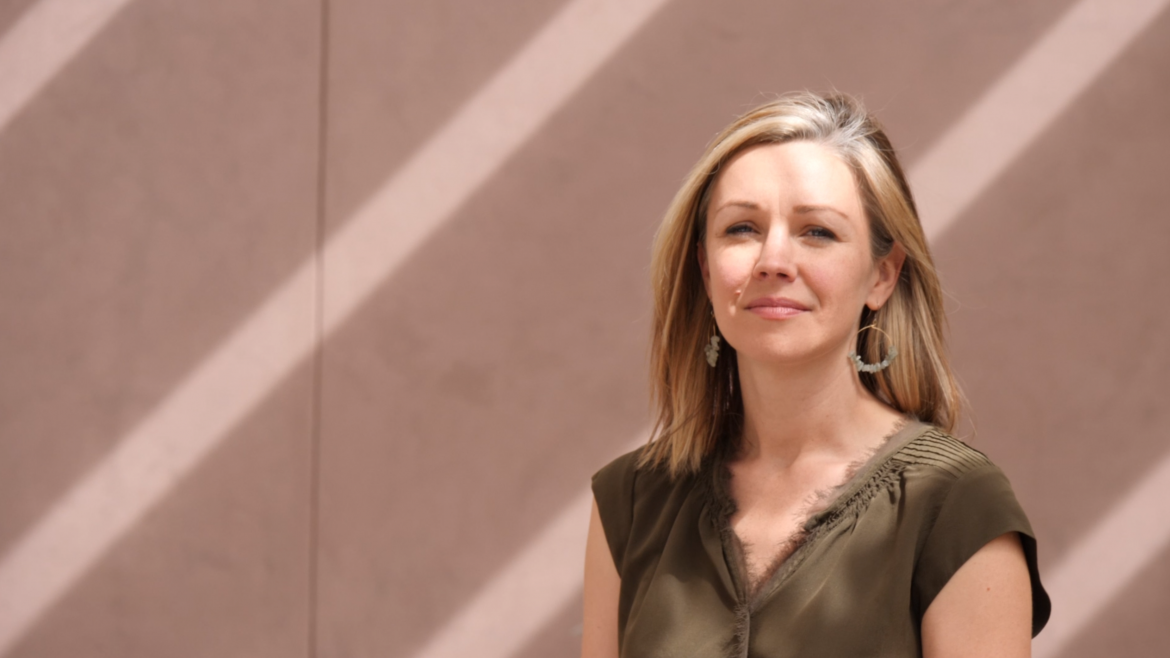 Working in an ensemble theater that has a focus on civic dialogue turned out to be a useful background for Courtney Davis when she decided to pursue a master’s degree in interior architecture at Arizona State University.

“Our company does a lot of engagement and we do unconventional work, in different sites, not theaters,” she said. Davis has been a member of the Sojourn Theatre ensemble for several years.

“Working in those sites, you get a sense of bodies in space — what it looks like to have a performance happen in a car dealership instead of on a stage in a theater,” she said.

“You’re really working with the architecture of what exists and that sparked something in me.”

Davis, who was named the outstanding graduate student for the spring semester by the Herberger Institute for Design and the Arts, got her undergraduate degree in theater and worked as an actress for several years. She later launched an interior-design business that flourished.

Then the family moved to Phoenix, where she decided it was time to pursue her interest in design. She is graduating after completing the three-plus-one program, a master’s degree for students whose undergraduate degree is not in design.

Davis said her background in theater has informed her design work.

“Our theater company works in communities and talks to people and finds out their stories and then expresses those stories and thinks about them critically,” she said. “We don’t make shows about one side or the other. We try to present questions.

“And as a designer, you have to ask all the questions of all the angles before you can even get started designing,” she said.

Davis was profoundly influenced by Design and Arts Corps, an initiative in which students partner with community groups. It's directed by Stephani Etheridge Woodson, a professor in the School of Film, Dance and Theatre.

Davis spent a semester last year working with Chrysalis, a women’s shelter in Phoenix, to renovate a two-bedroom transitional apartment.

“So through the course, Stephani mentors you through the collaboration process and communication with your partners and how to treat them as an equal in the design process. That’s core to how I think about design now,” she said.

“Our spaces can do a lot to care for us in ways we don’t always think about, so I’m always putting that lens on things now, especially when I think about public spaces.

“I was so honored to help them.”

Answer:  Because I was in the three-plus program, that first year I was wondering, "Is this meaningful to me?" But when I started working on my health care semester and with Chrysalis, I saw that this is science-based. This has impact. If I place this window so there’s a view of green, it can affect this patient and whether they need to take pain medication. Once I had that knowledge, I was like, "I get it." You can apply those wellness principles anywhere.

Q: What advice would you give to someone thinking about the master's degree in interior architecture program?

A: I remember my first year, it was so hot out but the air conditioning was cranking in the studio, so we would go sit on the upper patio of Design North to warm up. And it became one of my favorite spots. I spent time with other people out there and I also used to go out there by myself. I would give myself a little quiet space. You get a nice view of people walking by.

Q: If someone gave you $40 million to solve one problem in the world, what would you tackle?

A: I would spend the money on antiracism training for everybody. There’s a lot that people with privilege and power don’t recognize. They don’t recognize the difference it makes when you don’t have that power. We all need to dig deep and explore what it’s like to be someone else and have their experience.