Arizona State University President’s Professor Ariel Anbar has been selected to receive the 2019 Science Innovation Award from the European Association of Geochemistry (EAG). This award recognizes scientists who have recently made a particularly important and innovative breakthrough in geochemistry.

“Ariel Anbar’s contribution to geochemistry research has been a tremendous asset to the field and we’re so proud that he is being recognized at an international level by the EAG for his accomplishments,” said Lindy Elkins-Tanton, director of the School of Earth and Space Exploration. 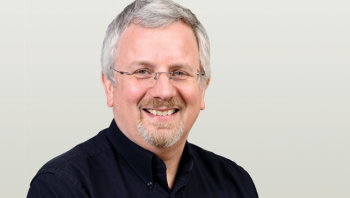 Anbar is a scientist and educator interested in Earth’s past and future as an inhabited world and the prospects for life beyond it. He is on the faculty of the School of Earth and Space Exploration and the School of Molecular Sciences and is a Distinguished Sustainability Scholar in ASU’s Julie Ann Wrigley Global Institute of Sustainability. Anbar also directs ASU’s Center for Education Through Exploration, which is reinventing digital learning around curiosity, exploration and discovery.

“Ariel Anbar’s work is typified by outstanding scholarship and a relentless commitment to making critical advances that will benefit science and society at large,” said Neal Woodbury, director of ASU’s School of Molecular Sciences.

While the award is given annually, the subject areas differ from year to year. The 2019 award is named after geochemist Samuel Epstein, who developed methods for reconstructing geologic temperature records using stable isotope geochemistry.

"This is an amazing honor, especially because Sam Epstein was one of my scientific heroes, and a friend late in his life,” Anbar said. “Sam was the pioneer in using isotope analysis to understand changes in Earth’s ancient environment. He was one of the founders of the field of isotope geochemistry and also a kind and generous man. There are few honors that would be as personally meaningful to me.”

Anbar, who is already a EAG Geochemical Fellow, will receive the engraved medal and provide a lecture at the EAG’s 2019 Goldschmidt meeting in Barcelona, Spain, this August.

Anbar’s nominator for this award, Timothy Lyons of the University of California, Riverside stated that Anbar has been a consistent innovator in the development and application of nontraditional stable isotope approaches.

“Armed with these tools, he has chased after some of the most fundamental questions about the co-evolution of life and its environments over Earth’s history — from our earliest oxygenation and the drivers of biological innovation and mass extinction to the relationships between deep and surface Earth processes,” said Lyons, who is a Distinguished Professor of Biogeochemistry. “When you add to these accomplishments his equally important leadership in innovative teaching, this honor is an obvious and very well-deserved result.”

Editor’s note: This is part of a series of profiles for spring 2019 commencement.Hunter Wickersham literally left his mark on Arizona State University.Go into the Technology Building on the Polytechnic campus, back into the print shops and photo studios and press equipment, and there it is, 10 feet high and 40 feet long: the History of Print wall.Beginning with 105 B.C., when the Chinese monk ... 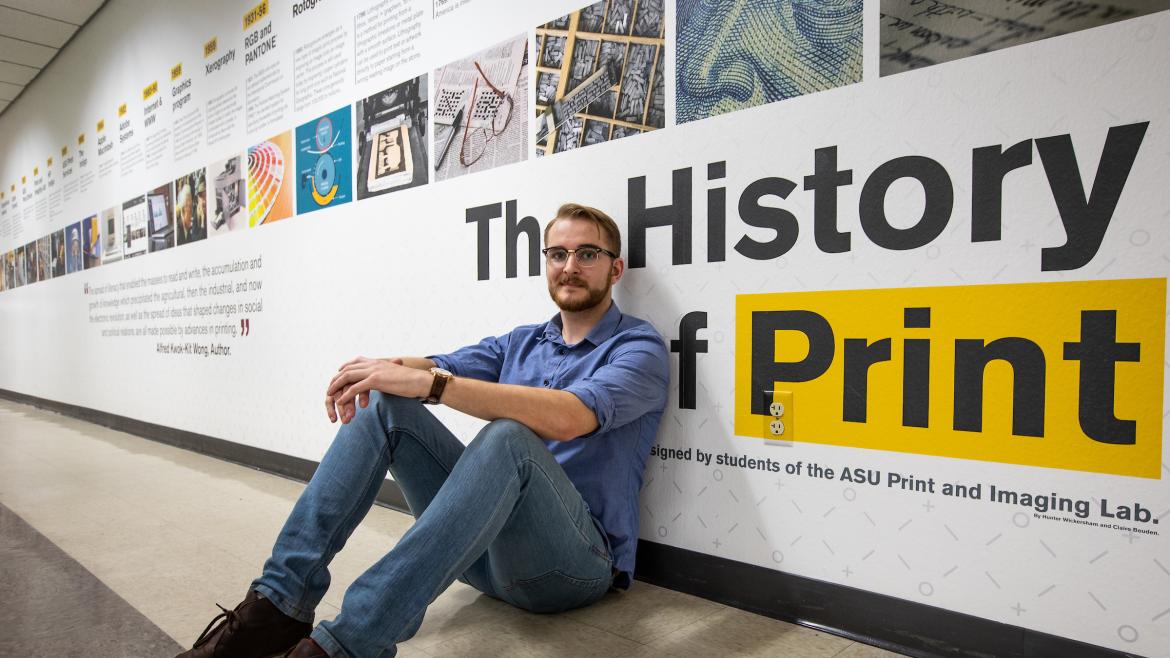 The student designer of the History of Print mural, Hunter Wickersham will leave ASU with a graphic information technology degree

Go into the Technology Building on the Polytechnic campus, back into the print shops and photo studios and press equipment, and there it is, 10 feet high and 40 feet long: the History of Print wall.

Beginning with 105 B.C., when the Chinese monk Ts’ai Lun invented paper, and moving to 400 A.D., when ink was created from lampblack and used for calligraphy, the timeline of text and graphics moves through intaglio, newspapers, lithography and rotogravure until 2017, when the university print lab acquired a Fuji inkjet flatbed.

“They wanted a design that was about ASU and that was very much on-brand,” said Wickersham, who graduates this month with a BS in graphic information technology. “That was the challenge. It had to be approved by everybody, because it was going on a wall. It had to go through a long approval process, because it’s representing ASU. I went through a lot — I want to say 10 different designs — ranging from different styles and trying to represent ASU in the best way I could, and they picked the most simple one.”

Eventually the San Luis Obispo, California, native wants to run his own creative agency. Right now he’s working at a marketing company startup in Chandler. He’s been there three years. The staff has grown to 15 people in that time.

Wickersham started out as a mechanical engineering major, but the art he always liked doing on the side, like painting, drew him away. His first job in high school was in a print shop. “I got exposed to (graphic design) there, so I grew to like it,” he said. He quickly switched majors.

Answer: The program itself has four different focus areas, which is pretty big, in a variety of visual media: animation, print and publishing, web design and photography. Learning all of those four things is pretty eye-opening. Learning about web and photography is something I never thought of, and now I love it. It’s good to know the whole suite of design.

A: I chose ASU because of the great engineering program.

A: About design, I want to say Prescott Perez-Fox. He definitely gave me the tools to go into the industry and be successful. The basis for the whole class was having a professional portfolio, building your resume, building your online presence. I already had a lot of that established, because I had a job, but it was nice to get it very cemented and very structured.

A: Don’t just focus on your classwork. That’s very important, but go out there and also get jobs in your industry, not just retail. Beg for jobs. That’s what I did. Every year I’d get a new job or a new internship. When I came to ASU I already had a job in graphic design because I applied over the summer. I was like, "I’m going to be ON it!" And I got a job they don’t hire freshmen for, so that was pretty cool.

A: The third floor of Santan (Hall) has a really cool lunchroom. I’d go there and hang out. That’s where I used to work, too.

A: I know that a lot of graphic design programs are underfunded. Helping develop those and giving people the technology they need. ASU has a lot of resources, but not a lot of other colleges have that. Developing assets for them to have, like a bunch of cameras and VR equipment, getting people exposed to all that, is something I’d do.

Top photo: Hunter Wickersham will soon be receiving his degree in graphic information technology and has a goal of starting his own creative agency. He designed the 40-foot-long History of Print wall mural in the Technology Center on the Polytechnic campus. Photo by Charlie Leight/ASU Now