Isaiah Sampson has had his sights set on a career in dentistry since he was a teenager. And while many students change their direction over the years, Sampson has held his focus and made calculated decisions to achieve his goals. 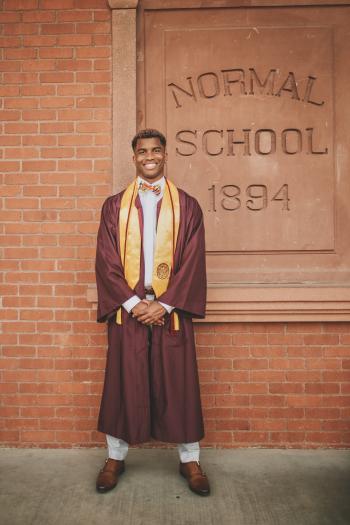 Isaiah Sampson will graduate with his bachelor's degree in microbiology and a minor in music this May. Download Full Image

The graduating senior, who will receive his bachelor’s degree in microbiology from the School of Life Sciences along with a minor in music this May, credits meditation for allowing him to stay on track.

“I’ve generally been focused but it hasn’t been as laser-like until I started meditating and that really gave a true grasp of the power your mind actually has,” he said. “Freshman year I wasn’t able to go to the Ignite Camp so I went to Spark and Scot Schoenborn held a breakout session about meditation. That was my first semester, freshman year and I’ve loved it ever since.”

Meditation, combined with an “almost militaristic schedule” of alarms, has allowed Sampson to stay on top of the many university initiatives he’s involved in, including assisting with orientation, mentoring students and fellow mentors, working as a TA, conducting research in the social insect research group and volunteering at Ryan House through Hospice of the Valley, just to name a few.

Outside of the opportunities and resources found within Arizona State University and The College of Liberal Arts and Sciences, Sampson said he found an environment that welcomed and supported diversity.

“If you feel as if empathy is something missing from the world, you should go to ASU because not only is the mission to include, the diversity is something that runs through this place seamlessly,” he said. “You encounter people from all types of backgrounds, you grow in the empathy you have and the understanding of other people's cultures. It is really a place where you grow a love for people because there are so many different relationships you create, and with these, you are able to understand the struggles of many different demographics. This is crucial in trying to create a world of cohesion.”

Sampson answered some questions about his time at ASU and shared what he has planned next.

A: I first got interested in the dental field when I was about 14 and then seriously put together the steps to accomplish that at 16. It was based on experiences my mom had with her dental health, and when I was younger, my sister got her tooth knocked out. Seeing how dental health affects people, that created a clear image that that was what I wanted to do. Since I knew there was a lot of science behind it, I figured I should study something that is interesting and applies to the field I’m going in.

A: Since ASU is so diverse you encounter a bunch of people from different backgrounds. … Seeing how we can connect with people and how that grows empathy and grows how we see the world was a thing I hadn’t really encountered. ASU is as diverse as it gets.

A: I came to ASU as an out-of-state student. What drew me to this school was that there were so many majors and it seemed as if the resources were endless. After I came to this institution, this idea was confirmed as I was able to see the many places to get involved and resources available. I was able to be an orientation leader, a TA for general biology, have a position in a research lab, be a facilitator — among other mentoring positions.

A: Christian Wright, he was my professor for BIO 281. He really solidified the idea of being cognizant of what you’re doing, being metacognitive in what you’re learning and — from a teaching aspect since I was interested in that — he taught me about self-evaluation and using the data you get from the results of students to better yourself as an educator. That made me grow great respect for him since he was always self-reflective with every exam, getting the results back, seeing what he could have done better, seeing what he could have communicated better and seeing how to test students better. It was really inspiring especially considering that in the future, I do want to go into academia. It was really cool to see a professor that cares so much about the students to such a high degree.

A: It’s dependent on what you want to go into, but as a broad statement, take what you’re getting involved in seriously and strategically. So if you’re set on one thing, make sure you are doing things that are contributing to a narrative that will be applicable to the field you’re going into.

Q: Is there an achievement or contribution that you are most proud of?

A: The achievement I am most proud of is being able to serve as the undergraduate representative on the School of Life Sciences Advisory Committee. This was something I was very happy about, not only because I was selected by faculty, but because it gave me a chance to actually give input into what this school should do based on student experiences. Being able to be in those meetings, and being unafraid to voice my opinions and share ideas among faculty, the dean of natural sciences (Nancy Gonzales) and other leadership within The College was a great opportunity. It felt incredible to actually see them take my input into consideration and to see the final product of what we came up with. Being able to identify what I contributed in the final write up of the process felt insane as these are things that will actually come to fruition. I am glad that the students are able to get a voice that is listened to rather than just heard.

A: The biology learning resource center. There was always a seat available and the people that worked there were always so nice, and we’d have great discussions about many things. It became a hub for students to connect. Now that I work there as a tutor, it’s cool to see how that translates on both sides.

A: I’m enrolled in UCLA School of Dentistry so that’s where I’ll be going starting in September.

A: Inner city and urban education systems, specifically in underprivileged communities. Being able to increase the education and the engagement of underrepresented groups within STEM and being able to increase resources with those groups to try and help out the transition and increase the underrepresented groups in STEM specifically. I’m a black male in STEM and I’m usually the only one in the class that looks like me and I think that’s definitely something that should be helped out.

The Arizona State University School of Music in the Herberger Institute for Design and the Arts has announced five winners in the 2019 Concerto Competition. Eleven students performed as finalists in the competition with five students selected to perform concertos with four different School of Music ensembles in the upcoming concert season.The competition winners are (listed in alphabetical order):...

The Arizona State University School of Music in the Herberger Institute for Design and the Arts has announced five winners in the 2019 Concerto Competition. Eleven students performed as finalists in the competition with five students selected to perform concertos with four different School of Music ensembles in the upcoming concert season. 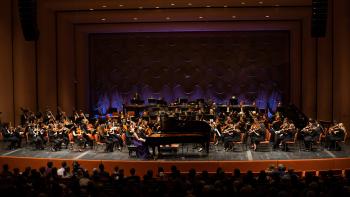 “I hope it will be a very formative performance experience for our top performers,” said Jeffery Meyer, director of ASU orchestras and concerto competition chair. “It is an important part of their education because playing with an orchestra is a completely different experience than playing with a piano or smaller group accompaniment.”

When Meyer joined the School of Music in 2016, he changed the format of the competition to allow for more of the top performing students to have the ability to perform entire concertos and for the school to program musical selections around those concertos.

Each performance area in the school — strings, keyboard, voice, winds, brass and percussion/guitar/harp — provides a different judge every year. The only criteria is that the judge not have a student in the competition.

“There are a lot of amazing students in our school and the competition is intense, so to be selected amongst their peers is a huge moment in most of their young careers,” said Jason Caslor, director of the ASU Wind Ensembles. “To perform as a soloist with a 100-piece orchestra or 70-piece band requires a steep learning curve and a distinct skill set we teach our students.”

“Performing a concerto is a rare opportunity as there are very few of these opportunities around,” Meyer said. “It is a distinction and an honor, and I hope the experience will ignite their performing career.”

The competition winners will perform their concerto with the listed ensemble in the 2019–20 season as follows:

Katrina Clements, clarinet
Oscar Navarro (b. 1981), Concerto No. 2 for Clarinet, performance with the ASU Wind Ensemble