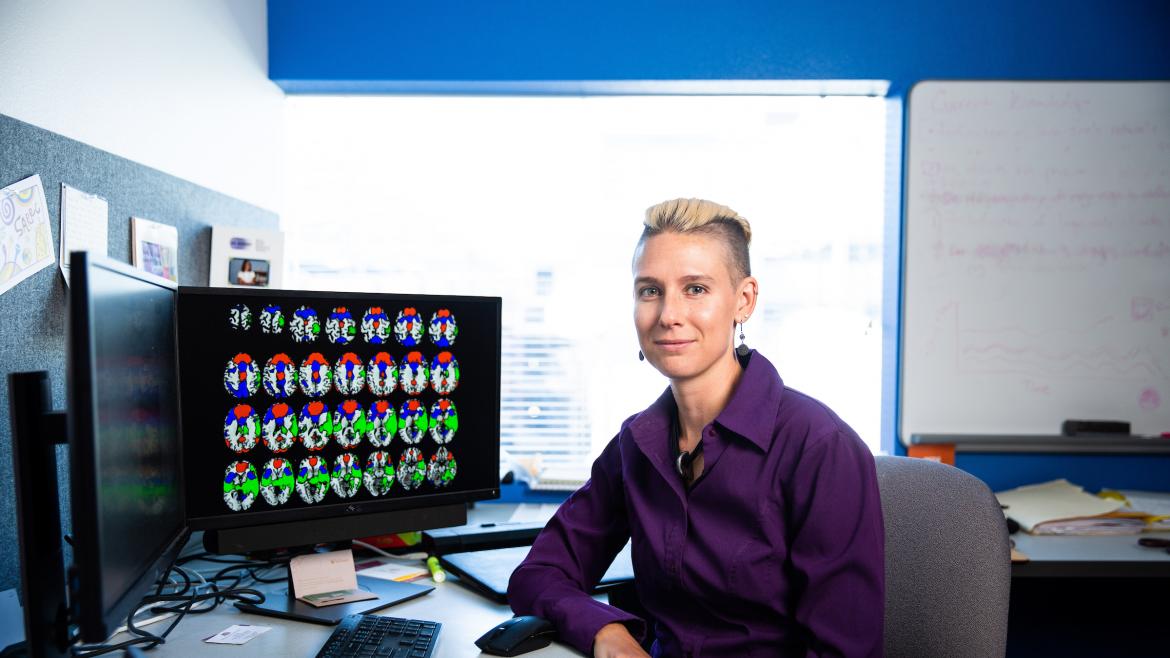 Studies probe the social communication challenges of aging with autism

What makes us who we are and how does that change as we get older?

It’s a question Arizona State University College of Health Solutions Assistant Professor B. Blair Braden has been asking since childhood, when she spent much of her time at the nursing home owned and operated by her family.

Later, her focus narrowed to how aging affects individuals with autism after spending time with students in her sister’s special education class.

And just this month, Braden published a series of related studies in the scholarly journal Research in Autism Spectrum Disorders — two of which will be featured in the journal’s special issue on aging with autism — that probe the specific question of how social and verbal fluency change as individuals with autism age.

Braden and her team in the Autism and Brain Aging Lab found that older adults with autismBraden notes that a large percentage of people on the autism spectrum are nonverbal. The studies referred to in this story included only individuals on the spectrum who have verbal abilities. report more social communication difficulties than younger adults with autism, however verbal fluency does not appear to become more difficult with age. Using brain scans, they were also able to deduce that areas of the brain related to social communication, cognition and executive functions thinned more quickly with age in adults with autism than those without.

“People with autism have a lot of these cognitive struggles and brain communication patterns that look more like what we know happens with aging,” Braden said. “So that really informed our hypothesis and, in this case, on a brain level, it panned out … and it correlated with their social communication difficulties. So we really feel like we have preliminary evidence for what the brain change is that is explaining the difficulties.”

In the United States, the Centers for Disease Control and Prevention estimate the number of children who have been diagnosed with autism at 1 in 59. That means, within a decade or two, there will be a population of about 1 million adults on the spectrum. Over their lifetime, treatment expenses, lost wages for themselves and lost wages for their caretakers can exceed $2 million.

“So there’s also a tax dollar reason to want to find effective ways of helping adults with autism integrate into society,” Braden said.

Robert Behr, a participant in Braden’s studies who was diagnosed with high-functioning autism in his mid-50s, has a master’s degree in computer science and a career as a software engineer. Despite his successes, he still sometimes struggles with the social aspect of communication, which he says has led to many a misunderstanding with girlfriends.

Fellow study participant Susan Golubock, also diagnosed with high-functioning autism later in life, has had somewhat less trouble in that area, thanks in part, she believes, to none other than Shirley Temple. As a child, Golubock learned to model her tone of voice and facial expressions after the saccharine child actor, which helped her master those nonverbal communication cues crucial to positive social interactions. 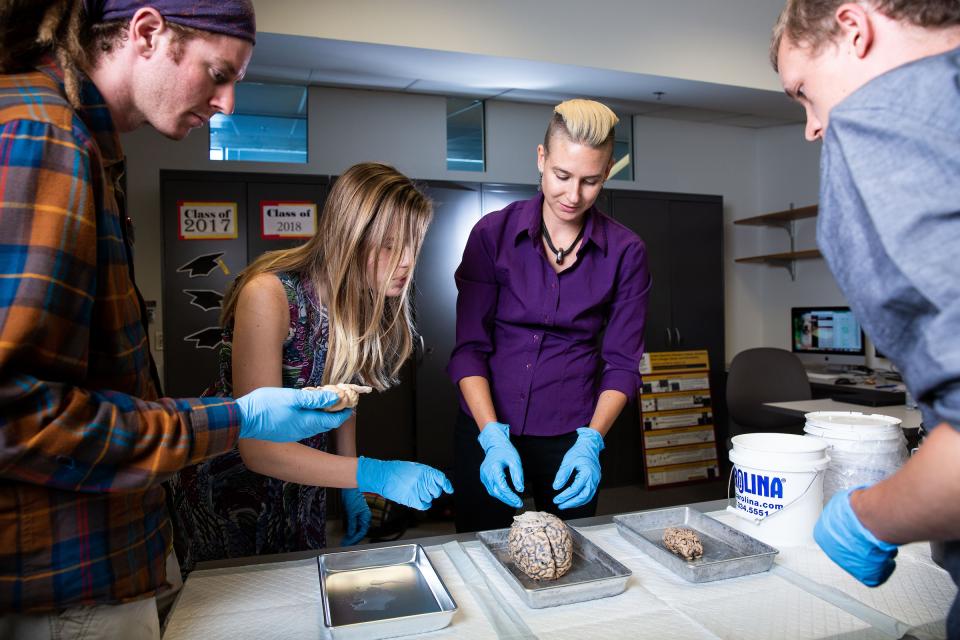 Assistant professor B. Blair Braden works with students in her lab to examine parts of the human brain as well as sheep brains in the Autism Brain Aging Lab in July 2018. Braden's lab works on studying age-related changes in adults with autism spectrum disorder. Photo by Deanna Dent/ASU Now

“I felt these were things that people expected of me and I didn't know how to do them, so I taught myself,” she said.

Even so, Golubock still finds social situations overwhelming. When one researcher asked her what she learned about her friends on a recent lunch date, she had an epiphany.

“It was like, I had no clue that's why people did it (spent time interacting socially),” she said. “I was supposed to be learning something about them? With all that noise going on, and focusing on not aspirating and all the other things I had to focus on?”

That Golubock is successful at appearing outwardly adept in social situations while inwardly she feels stressed is evidence of a phenomenon known as camouflaging.

“Camouflaging is still a working definition,” Braden said. “It’s only something that's been talked about a lot in the last couple of years, but it’s the discrepancy between someone’s internal experience and their external output. … And that discrepancy is greater for women.”

Such nuances are good examples of why Braden is working diligently to ensure more women are involved in this kind of research. 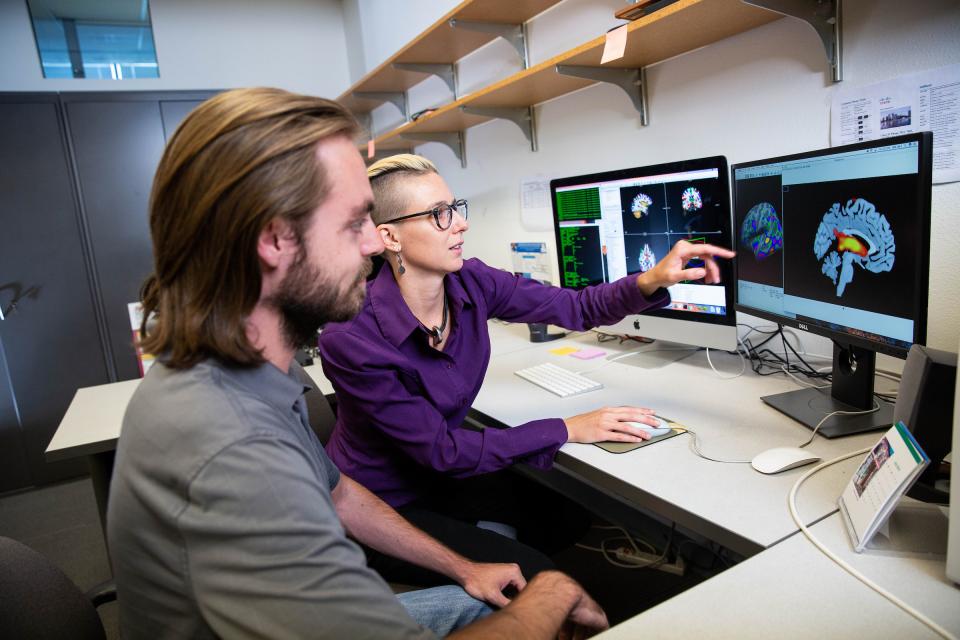 However, both caution that such interventions must be carefully thought out.

Behr believes having grown up “in the wild,” as he phrases it — meaning they weren’t diagnosed until later in life, and as such, didn’t receive therapy or behavioral intervention as children — puts them at an advantage over children today because, while he and Golubock had to think hard about social interaction and figure it out on their own, children today are simply following instructions on how to act without thinking or understanding why.

Braden is taking their concerns into consideration as she works to design new types of interventions that adapt tools used to teach social communication skills to teens and young adults with autism to make them feasible for people who are experiencing age-related decline in that area.

“I just think it’s important for everyone to know what to expect when they get older, especially if there’s reason to believe aging may affect you differently,” she said.

Braden and her team are always enrolling new adults with autism and neurotypical participants for studies.

Editor’s note: This is part of a series of profiles for spring 2019 commencement.Arizona State University doctoral student Katie Alford was used to going it alone. She depended mostly on herself and worked hard at maintaining a high level of excellence.Before defending her dissertation toward a PhD in English education on April 8, she served as a teaching assistant for ASU’s Writing Progr...

Arizona State University doctoral student Katie Alford was used to going it alone. She depended mostly on herself and worked hard at maintaining a high level of excellence. 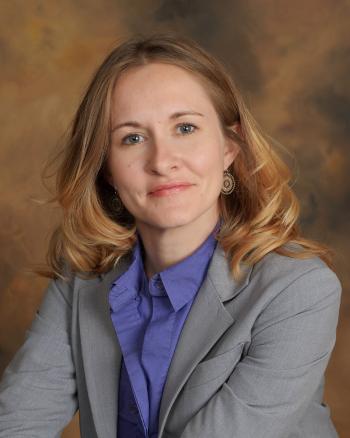 Graduating English education doctoral student Katie Alford learned the importance of community at ASU. "My colleagues have taught me so much,” Alford said, “especially how learning does not happen in isolation.” Download Full Image

Before defending her dissertation toward a PhD in English education on April 8, she served as a teaching assistant for ASU’s Writing Programs for several semesters. She earned a teaching award for her skill from ASU’s Graduate and Professional Student Association.

She researched and shared her work, presenting her findings and best practices locally and across the U.S. She published that work too, winning a national award: the 2018 CEL English Leadership Quarterly Best Article Award for the article, “Take Time to Write!: A Teacher’s Story of Writing Within a Community of Teacher Writers,” co-written with ASU English education Associate Professor Jessica Early.

And — the goal of most graduating students — she got a job. Alford will begin a tenure-track faculty position in fall 2019 at McKendree University in Lebanon, Illinois.

But Alford admitted that her most important lesson wasn’t about her subject matter. Instead, it was in learning to lean on others.

“My colleagues have taught me so much,” Alford said, “especially how learning does not happen in isolation; it happens in community.”

We spoke more with Alford about her ASU experiences and connections.

Answer: I taught high school English here in the Valley for nine years before pursuing my PhD at Arizona State University. I came from Colorado after getting married and fell in love with the sunshine and warm weather. While teaching I realized I wanted to learn even more. I enjoyed preparing professional development curriculum for my school and having student teachers in my classroom, so I decided that teaching preservice teachers would be my next life adventure. After taking a few courses to check out the program I knew this was the place for me, and I officially applied.

A: I’ve learned so many things while here at ASU. Perhaps the most helpful was the importance of building a strong surrounding community. My peers have played such a vital role in my success: They’ve pushed me to be better, encouraged me when I was down and celebrated with me in my triumphs. I typically stay to myself, but I’ve learned that to grow you must talk and share your learning with others to make it more concrete and lasting. Discussion with other doctoral students has been a great source of learning for me.

A: ASU clearly has a stellar reputation in its preparation of graduate students. The work accomplished here is top-notch and the researchers are celebrated for their excellent contributions to the world. ASU offers robust programs because of its size and has the means to support a variety of research that has the capacity to change our world. This excites me and makes me proud to be a part of this community.

A: Pursuing a degree is like preparing for a marathon. It takes hard work for many weeks, months and years. It seems like an impossible task at the start, but incrementally you get closer and closer until you find yourself at the end. I remember feeling overwhelmed especially in the beginning and thinking I was never going to see the finish line, but here I am. Also, imposter syndrome is a real thing, so read about it!

A: I love meeting my friends for lunch at Engrained in the MU, or at ChopShop off campus. I often sat with colleagues to discuss the hard work and deep thinking from our classes, but more often we would just vent about the challenges of graduate school. Engrained has great food and lots of space to meet and catch up during lunch, and ChopShop is an oasis away from the rush of ASU.

A: I will be moving to Illinois for a tenure track job at McKendree University, a small private college. I will teach education courses and continue my research agenda focusing on the preparation of preservice English Language Arts teachers especially in regard to their confidence and competence in teaching writing.

A: The United States education system. I believe a complete overhaul is needed. Corruption and bureaucratic gaming has shifted the educational landscape for too long. Real reform that is student-centered and focused on celebrating differences and not on creating test takers would and could improve the critical thinking skills of 21st-century learners, which is what I believe our focus should be. Complex problem-solving is what makes us different from computers, so we MUST ensure students have those skills in order to become not obsolete. Certainly $40 million would not be enough, but hopefully enough to shift the current focus.