David Ackerman chose to attend Arizona State University not only because it was affordable and close to home, but because it offered the opportunity to get involved in research right from the start. His combination of research, contributions to the university and impressive academic record earned him the honor of Dean’s Medalist for the School of Mathematical and Statistical Sciences this semester. 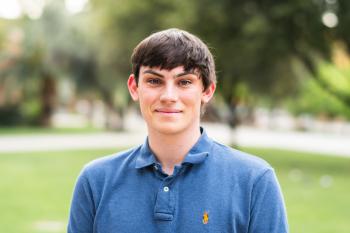 Ackerman worked as an undergraduate researcher in Wade Van Horn’s biochemistry lab attempting to purify and extract a protein known as TRPM8.

While a biochemistry major, he took mathematics courses on the side because he has always had an interest in math. During his sophomore year, he realized he wasn’t happy with the careers his major was taking him toward so he switched to computational mathematical sciences as his major.

He then joined Sharon Crook’s ICONlab, where he also worked on his research thesis for Barrett, The Honors College. In collaboration with the Van Horn lab, he is building a mathematical and computer model of the TPRM8 channel, an ion channel in a cell in the body, that accurately recreates behavior observed experimentally. The research involves heavy application of numerical methods and scientific computing, two areas he focused on with his upper-division mathematics electives.

He also worked with Devin Schrader in the Center for Meteorite Studies analyzing two meteorites over the course of a year. The research involved the use of photoelectron spectroscopy and data analysis.

Last summer, Ackerman started an internship at Orbital ATK/Northrop Grumman gathering data and entering it into a database for the rocketry company. He finished the work a month early and got to work as a website designer. That led to a part-time position, and now he has landed a spot on a programming development team. He recently received a full-time offer as a programmer and data analyst after graduation, and he plans on accepting it. He hopes to return to school for his master's in a few years.

The Scottsdale, Arizona, native will earn his bachelor’s degree in computational mathematical sciences along with a minor in astronomy. He is appreciative of all the opportunities he had while pursuing his degree in the School of Mathematical and Statistical Sciences.

“The blend of programming and math, along with my astronomy minor, helped me find a job supporting sending rockets into space!”

Ackerman will be graduating this May. We asked him a few questions about his time at ASU.

Question: What is something you learned while at ASU — in the classroom or otherwise — that surprised you, that changed your perspective?

Answer: Particular to math, ASU helped show me a much broader sense of what mathematics is compared to the typically plug-and-chug nature of high school math. Overall, ASU just exposed me to many different people with different perspectives.

A: Dr. Sharon Crook taught me the whole process of how research is done and how to properly utilize/leverage all tools available. These teachings have proven very useful in my thesis and professional work. Dr. Donald Jones made me truly appreciate the structure and theory of math through his great teaching in MAT371.

A: The best piece of advice I would give to someone in school is to just stick with it and don't beat yourself up for not understanding something. Particularly with math, there were many times when something just didn't make sense and I grew frustrated with it. However sticking with it and taking time to first clear my mind before tackling the problem would always help me through it.

Q: What do you like most about mathematics, and your area of concentration?

A: With mathematics, I love to see the answer come together at the end. Seeing all the work and logic combine into a verifiable answer always gives me great satisfaction. I also like the challenge with math. Each problem requires a different set of tools and tricks to solve. For my area of interest, numerical analysis, and computational math, I especially enjoy using methods to find approximate solutions to problems without exact ones. The advancements in computational power and numerical methods allow us to better understand and model phenomena of the real world, a process I did during my thesis of modeling TRPM8 ion channel kinetics.

A: A lot of people in the general public seem to think math is doing calculations and is something you either get or don't get. Math is an entire toolbox and approach to problem solving, and can be improved through effort and great teachers like most other things.

A: Noble Library was my go-to studying/work/meeting-friends spot. It is the superior library.

A: Outside of school I enjoy hiking, personal coding projects and amateur astronomy.

A: I would probably put it towards researching Alzheimer's and other dementia illnesses. Although not as large a scale as other problems like the environment, I have had several family members suffer from these horrible mental diseases, and as such they are a personal issue to me.

Editor’s note: This is part of a series of profiles for spring 2019 commencement.Depression and anxiety disorders affect almost 20% of the American population, including 25% of children between 13 and 18 years old.Emily Bobel, an undergraduate psychology major at Arizona State University, wanted to find out if depression could be a missing link connecting childhood trauma and problems with alc...

Depression and anxiety disorders affect almost 20% of the American population, including 25% of children between 13 and 18 years old. 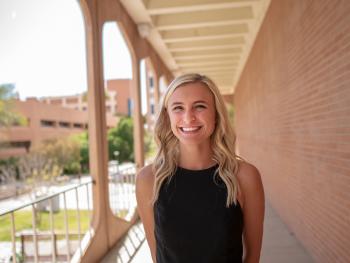 Emily Bobel, an undergraduate psychology major at Arizona State University, wanted to find out if depression could be a missing link connecting childhood trauma and problems with alcohol consumption.

Bobel’s senior honors research thesis, “The Exploration of Depression as a Mediating Mechanism Between Trauma and Alcohol Problems” looked at whether depression could explain why individuals who suffered childhood trauma experience impaired control over drinking and other negative drinking outcomes later in life. Because feelings of shame and self-concealment behaviors have been linked to impaired control and problem drinking, Bobel also looked at whether individuals who experienced childhood trauma have behaviors like heavy episodic drinking or other alcohol-related problems later in life.

“We thought depression, which is an internalizing disorder, and impaired control could be an additional explanation for the relationship between childhood trauma and drinking behaviors,” Bobel said.

Childhood abuse comes in many forms and can include emotional, physical, sexual, verbal, financial or cultural abuse. According to ChildHelp, a Phoenix-based nonprofit dedicated to helping victims of child abuse and neglect, over 6.6 million children are referred to state child protective services each year, and a report of child abuse is made every 10 seconds.

“Emotional abuse was more strongly related to depression and impaired control than any of the other kinds of childhood trauma in our college student sample,” she said.

For her senior thesis, Bobel worked in ASU’s Social Addictions Impulse Lab (SAIL) with lab director Julie Patock-Peckham, a research assistant professor in the Department of Psychology and Barrett Honors Faculty. Research in the SAIL Lab seeks to understand the root causes of addiction in adulthood, including from internal sources like anxiety or depression or external sources like a personality disorder.

“Emily is a talented writer and presenter, and we depend on her a lot in the SAIL lab,” Patock-Peckham said. “Everyone in the SAIL lab is very proud of her and all that she has accomplished in the last year.”

We asked Bobel the following questions about her time at ASU:

A: I’ve always been interested in helping people and finding out why they end up in their current situations. I feel like psychology does both of these things very well. It’s been very interesting for me to study how something that happens to you so early on in life can affect your behavior so many years later, and sometimes not for the best.

Q: What made you choose ASU?

A: I chose to attend ASU because the weather here is much nicer than it is in Michigan, where I’m from. I was also accepted into Barrett, The Honors College and wanted to take advantage of all the opportunities Barrett had to offer.

Q: What was your favorite part of campus?

A: My favorite part of campus is the balcony on the student services building. You can barely see it when you walk past from the ground, so people don’t utilize the space a lot. Whenever I go up there to study it’s basically empty, so you can study with a view and little to no distractions!

Q: What was your favorite class?

A: My favorite class was an Inside Out Prison Exchange honors course called Men and Feminism. It was a discussion-based course that consisted of eight Barrett students and 10 men from the Maricopa Reentry Center. I have never felt more connected to a group of people or learned so much about a topic that is so important in our society in such a short period of time.

Q: What is the best advice you can give an undergraduate at ASU?

A: The best advice I can give to an ASU undergraduate is to get involved as soon as possible and take advantage of all of the resources ASU has to offer. I also would encourage them to take classes in a bunch of different subject areas to see if there is something that interests them that they wouldn’t have thought of otherwise. The privilege of education is one that should never be taken for granted.

A: I plan to take some time to determine what my greatest interests are and how I can turn them into a career that satisfies my desire to help others. I will most likely pursue a graduate degree in clinical psychology and focus my research on correctional psychology.

Q: If someone gave you $40 million to solve one problem, what would you tackle?

A: If someone gave me $40 million dollars, I would try to determine the most effective methods to reduce recidivism rates in the U.S. I would love the opportunity to travel to other countries with more effective prison systems and determine if we could implement their practices here in the U.S. I would also want to address mental health care for prisoners, as I feel that getting treatment can be an effective way to help people leave a criminal lifestyle in their past.