Parkinson’s disease, a neurodegenerative disorder, largely affects movement and causes irreversible neuronal damage. It may start with a tremor or it may be manifested in a speech problem; however, by the time symptoms are evident, it is too late to halt the course of the disease.

Parkinson's originates from the loss of neurons releasing dopamine. Because these neurons control coordination in movement, their loss results in a multitude of movement-related deficiencies. 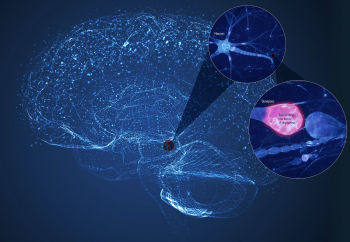 Parkinson's disease originates from the loss of neurons releasing dopamine. Because these neurons control coordination in movement, their loss results in a multitude of movement-related deficiencies. Download Full Image

Although there is medication to treat the symptoms of Parkinson's, there is no known cure. To mediate this problem and propose more effective therapeutic strategies, an earlier diagnosis is key.

“One of the biggest issues with neurodegenerative diseases like Parkinson’s disease or Alzheimer’s disease is that diagnosis is mostly clinically based, and it comes late in the disease — the brain is already degenerated, and it is extremely difficult to restore brain function at that stage,” said Travis Dunckley, an assistant research professor at the ASU-Banner Neurodegenerative Disease Research Center and the School of Life Sciences.

Dunckley teamed up with other universities including UCSD, Texas A&M and Harvard University and research institutes such as TGen to study the epigenetic changes in Parkinson's patients over time, specifically alterations in DNA methylation patterns over the course of the disease. If researchers were to obtain a better understanding of the DNA methylome in Parkinson's patients, they could potentially diagnose the disease earlier.

Currently, the disease is identified through clinical symptoms related to physical movement.

“When physicians treat PD patients, it is usually too late to change the trajectory of the disease. I am interested in early diagnostics to try to identify people prone to the disease before they get it,” Dunckley added. “Using this approach, you could put patients at risk for PD on certain therapies before symptoms arise.”

Parkinson's is governed both by genetic factors and environmental factors, making epigenetics an apt area of study.

DNA methylation, one form of epigenetic alteration of genes, is a process during which methyl groups are added to DNA. These methyl groups can change the activity of the DNA without changing its sequence. However, in the context of Parkinson's disease, it can be difficult to conclude that changes in DNA methylation are solely correlated to disease progression.

In this study, the largest longitudinal epigenetic study in Parkinson's disease to date, 189 patients’ methylomes were studied and compared to that of 191 control subjects. Two years later, their methylomes were compared once again.

The project identified distinct methylation patterns in Parkinson's patients relative to control patients and identified specific sites at which methylation changed longitudinally. The study also found differences in methylation patterns for those subjected to anti-Parkinson’s drugs (dopamine replacement drugs) versus those who received no treatment. The researchers found that DNA methylation changed more for those patients without treatment, further exacerbating the link between epigenetics and Parkinson's progression.

“The main findings are that one, the epigenome does change as the disease progresses. The second finding is that the PD medications themselves alter the epigenome,” Dunckley added.

If researchers can identify changes in methylation that are characteristic of Parkinson's disease, they can diagnose earlier, allowing for more effective therapeutic strategies before there is irreversible damage. The methylation signatures are therefore promising candidates for biomarkers useful in early detection.

To expand the scope of the project, Dunckley and his counterparts are repeating the same study but with a longer range of time and with a new subset of patients.

“The next study we are doing is a replication and extension of this one to validate the findings and extend the observation period to five years,” Dunckley said. “We are also including patients that are very early in PD progression, patients who have symptoms that are highly predictive of future PD. The ultimate goal is to identify changes in these earliest stages of disease that can be predictive of future PD onset.”

Further exploration of epigenetic changes like DNA methylation promise to expand the understanding of this enigmatic disease and hopefully point the way to effective treatments.

Arizona State University Professor Hal Smith has been named a fellow of the prestigious American Association for the Advancement of Science (AAAS) in recognition of his pioneering efforts in biological sciences.The AAAS, publisher of the journal Science, is the world’s largest general scientific society. Election as a fellow is an honor bestowed upon AAAS members by their peers for their scie...

Arizona State University Professor Hal Smith has been named a fellow of the prestigious American Association for the Advancement of Science (AAAS) in recognition of his pioneering efforts in biological sciences.

The AAAS, publisher of the journal Science, is the world’s largest general scientific society. Election as a fellow is an honor bestowed upon AAAS members by their peers for their scientifically or socially distinguished efforts to advance science. 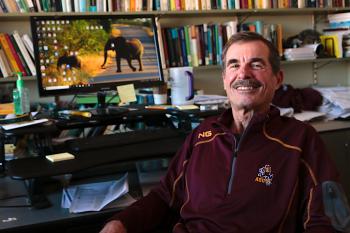 Smith grew up in Cedar Rapids, Iowa, a place he describes as “a nice town.”

During his early years at the University of Iowa, he struggled with social science and English courses but really enjoyed physics and math. He didn’t have any future employment in mind, but just wanted to keep learning more.

He thought he would go to graduate school, but then the Vietnam War intervened. After a couple of years serving in the military, he went back to look for his old professor in physics but could not find him. He then found one of his old mathematics professors who greeted him with an offer as a teaching assistant. “So I went to graduate school in math,” he chuckled.

His adviser was going into biology and that influenced Smith and other graduate students to pursue different areas of biological sciences.

Smith is currently a professor in the School of Mathematical and Statistical Sciences. His research focuses on differential equations, dynamical systems and their applications to the biological sciences.

He is primarily involved with providing tools for the kinds of mathematical models that come up in population biology, ecology and epidemiology.

He writes mathematical models in the form of differential equations to try to capture the interactions of populations, or diseases, where the focus is usually on what is happening to the numbers. The models try to determine if the numbers reach some sort of steady state equilibrium over a long time, or if they oscillate.

Some of Smith’s most recent work has been modeling what happens inside the body when it is infected with HIV. When the virus gets in the body, it attacks certain immune cells. Then the virus replicates very fast and very sloppily and makes many mistakes when it copies its genome. Each mistake then allows for a variant of the virus.

“Math can go sometimes where the biologists can’t yet go." — Hal Smith

“The virus inside of the blood is not homogenous, it is a collection of quite a few viral types, which presents the immune system with difficulty," Smith said. "The immune cells have to recognize each particular variant of the receptor that the virus presents on the cell that it affects. And so you have all these variants of the HIV virus in the body, each one reproducing at different rates, and then the immune system has to provide immune cells that are capable of recognizing these different virus types.

“It would be useful to know which viral types might become dominant. And what the resulting immune types would be eventually, such that one might figure out how to attack the most dominant viral type, or at least influence this warfare inside the body in some way.”

Math is very useful to this process by creating specialty tools.

“It is very difficult for biologists to quantify what is really going on inside a human body. Where mathematics has no trouble imagining — with lots of assumptions, of course, that mathematics always make, that sometimes drive biologists crazy — but mathematicians can create mathematical models of the process that are reasonably faithful to the biology and explore questions that are very difficult for the biologists to measure. Math is providing the tools to measure and quantify these things," Smith said.

“Math can go sometimes where the biologists can’t yet go," he said. "The caveat is that one makes these assumptions that the blood is well-stirred. You can take away complexities using math. The human body is very complicated — the different compartments where the viruses go in the body, where the blood is, where the lymph nodes are, these organs are difficult to access and have strange geometries — all these are details that get in the way perhaps of understanding.

“Math ignores these details and tries to just simplify the interactions. Here are the results of that. If the results don’t correspond with the biological reality, then we have to go back and add some of the complexity back into the model. But at least you get a start. Then the biologist will complain, ‘Oh, you missed this.’ Then we ask, ‘What’s the most important thing we missed?’ Let’s now throw that in and try again. Go back and forth and try to learn more.” 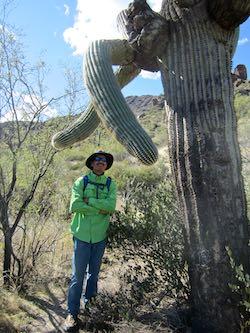 When not solving math problems, Smith loves to get outdoors. He rides his bike to work, swims to stay in shape and enjoys hiking.

After earning his PhD, he did his postdoctoral research in Utah, and “getting away from the cornfields of Iowa and finding out there were these mountains … you can’t hike in Iowa — you hike through the rows of corn,” he said with a laugh.

“Once I discovered you could hike in the mountains, I just wanted to stay out in the West where there were mountains. Then I got an offer from ASU.”

Smith started at Arizona State University in August 1979. He has seen many changes over those 40 years, including the growth of the university from about 30,000 students to now nearly 100,000 on all campuses.

“The university has improved so much. The research strength of our school and the the grant funding has increased dramatically,” Smith said.

“Each president has lifted the place higher.”

“Now we have so many new and exciting faculty members," he said. "I’m motivated by what the younger faculty are doing, and attending the seminars that they’ve organized because they are doing things that are right on the cusp of where science is moving.

“And I am having a lot of fun learning from them.”