Electrical engineering researchers are constantly improving the technologies that impact our everyday lives. Each year, the Institute of Electrical and Electronics Engineers, better known as IEEE, recognizes members who have made significant accomplishments in their field.

The IEEE board of directors selects from among less than one-tenth of 1% of the most prestigious IEEE members to be elevated to the distinction of Fellow. Now that top tier includes two faculty members in the Ira A. Fulton Schools of Engineering at Arizona State University. 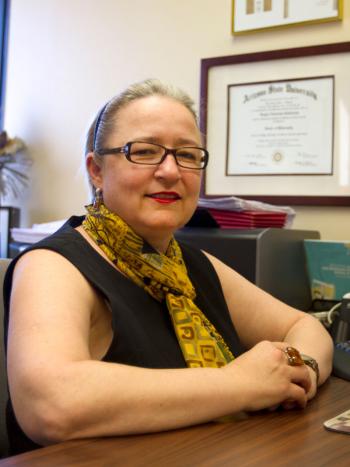 Dragica Vasileska from the Ira A. Fulton Schools of Engineering at ASU has been named a 2019 IEEE Fellow. Download Full Image

Professor Dragica Vasileska was selected for her contributions to computational electronics and simulation of nanoscale devices. Professor Yanchao Zhang earned the distinction for his contributions to wireless and mobile security.

These two faculty members in the School of Electrical, Computer and Energy Engineering, one of the six Fulton Schools, join nearly 300 prominent researchers from around the world in the 2019 class of Fellows.

Big impacts at the nanoscale

Scaling transistors to the nanometer range leads to problems caused by discrete impurity effects, quantum confinement and the self-heating effect. Vasileska’s research focuses on how to mitigate these problems to make better and cheaper next-generation devices.

Her primary tool is computational electronics, a method of investigation of device structures that uses models and simulations.

“Computational electronics provides a reliable way to understand and prove theories about the effect being investigated,” Vasileska said. “It is both faster and cheaper than experimentation, and its results can be used to design or optimize experiments and accelerate scientific discovery.”

She studies these effects in different technology nodes of Fully Depleted Silicon On Insulator, or — FD-SOI — devices, dual-gate devices, nanowire transistors, heater and sensor combinations and other structures and devices.

Her important contributions are inclusion of the collisional broadening of the states and its impact on low-field mobility in silicon inversion layers, treatment of short-range Coulomb interactions (an electrodynamic principle of interactions between electric charges), investigations of self-heating effects that degrade device ON-current, and 2D drift-diffusion-reaction modeling.

Vasileska is also active in advancing the educational resources for her field with nanoHUB, the science gateway of the Network for Computational Nanotechnology, first sponsored by the National Science Foundation.

Representing ASU, she is the third most prolific contributor of educational material and simulation tools on nanoHUB. Her most-cited tool on the gateway is SCHRED. ABACUS and AQME are the most popular tool-based curricula on the platform, providing a new mode of teaching students how devices work.

“With Professor Gerhard Klimeck (from Purdue University) I created the concept of tools-based curricula — a set of tools supplemented with presentation slides, problems, challenge exercises and reading material,” Vasileska said.

She has more than 180 publications in scientific journals and more than 200 conference proceedings and refereed papers. She has co-authored six books and 25 book chapters and has delivered numerous invited talks about her work.

In 1998, Vasileska received an NSF CAREER Award to support her research. In addition, students who have contributed to her research have earned numerous best poster and best paper awards over the years. 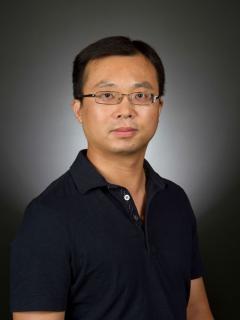 Our connected devices — smartphones, tablets, wearables and more — are increasingly storing private information. This makes hacking the devices alluring to malicious actors looking to exploit lapses in security. Zhang’s mission to secure potential vulnerabilities from cyberattack is no easy feat.

“Wireless and mobile devices are much more difficult to safeguard than regular computers,” Zhang said. “Our group is dedicated to discovering new security and privacy threats in all kinds of wireless and mobile systems and also coming up with innovative countermeasures.”

Zhang explores different ways mobile connected devices are difficult to secure. Battery-powered devices have tight resource constraints, so security measures must have a small footprint. Small devices also have physical insecurities as they can be easily lost or stolen.

On the wireless signal side, connected devices hop on and off various wireless networks that each pose their own security challenges, and open wireless links are subject to eavesdropping and jamming.

Even if these vulnerabilities are secured, “hackers’ capabilities also grow over time, so there is an endless race between hackers and security researchers,” Zhang said.

To get ahead of hackers, Zhang explores a combination of theoretical and experimental methods to combat security and privacy threats in wireless and mobile systems — especially by promoting proactive security design, or, as Zhang explained, “making security and privacy issues essential design components of future wireless and mobile systems from the beginning.”

Zhang has made important contributions to the security and privacy of emerging wireless networks, mobile crowdsourcing and sensing, the internet of things and social networking, as well as wireless and mobile systems for people with disabilities, wearable computing, cloud and edge computing, big data analytics, wireless and mobile health monitoring and artificial intelligence.

His recent contributions include the proposal of a novel face authentication framework for mobile devices, a new approach to make two-factor authentication systems such as Duo Mobile more usable and secure, and a novel framework for sharing social network information in a verifiable and privacy-preserving fashion. Four provisional patents have been filed for these innovations through ASU Skysong Innovations. In addition, his group unveiled new threats in which hackers can infer the passwords of mobile device users from device vibrations and users’ eye movement, the results of which were published in the top-tier venues such as the IEEE Symposium on Security and Privacy.

Zhang has published 45 conference papers, 40 journal and magazine articles and three book chapters; his work has been cited more than 6,400 times in papers by other researchers.

In 2009, Zhang received an NSF CAREER award to support his research, which has helped lead to five provisional patent submissions related to his wireless and mobile security research through ASU Skysong Innovations, a technology transfer accelerator.

Vasileska and Zhang join 36 faculty members in the Fulton Schools who have been named IEEE Fellows.

David Brooks, American journalist and commentator, will deliver the address at Arizona State University’s undergraduate commencement on May 6 in Tempe.He will speak to thousands of graduating students and their guests at Sun Devil Stadium. During the ceremony, he will also be presented with an honorary Doctor of Humane Letters degree.David BrooksBest-selling author Brooks is known for his op-ed ... 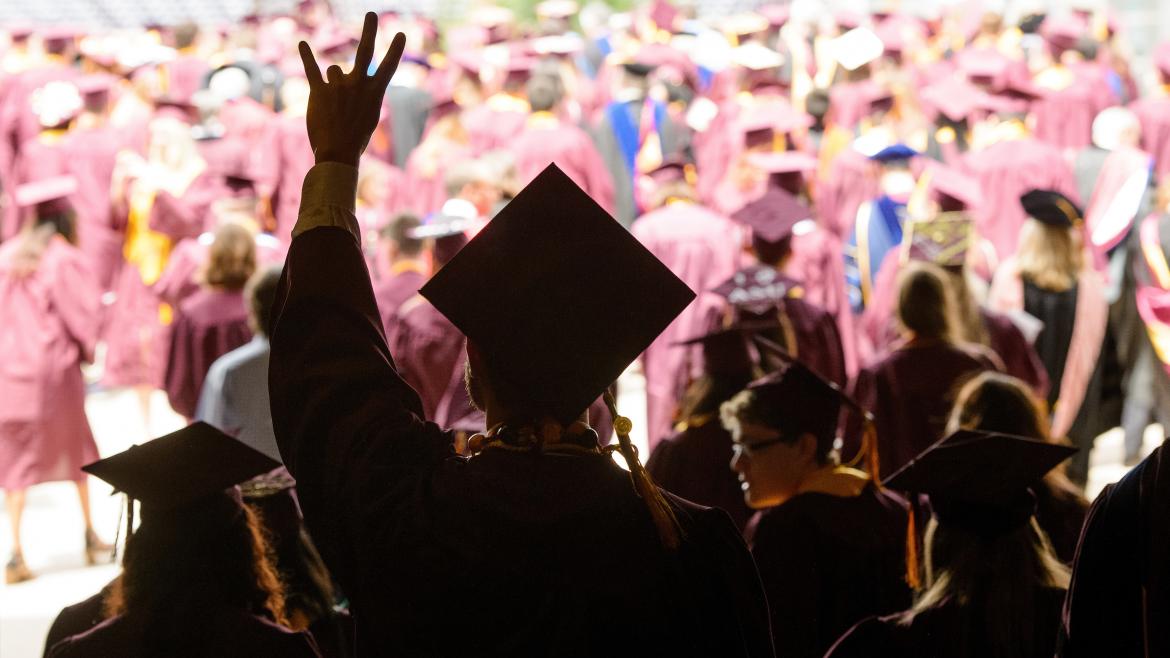 David Brooks, American journalist and commentator, will deliver the address at Arizona State University’s undergraduate commencement on May 6 in Tempe.

He will speak to thousands of graduating studentsSome 10,948 undergraduate students and 4,866 have applied to graduate. The graduate ceremony will take place earlier that day at Wells Fargo Arena. and their guests at Sun Devil Stadium. During the ceremony, he will also be presented with an honorary Doctor of Humane Letters degree. 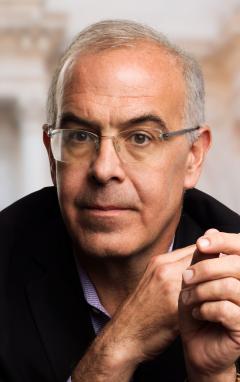 Best-selling author Brooks is known for his op-ed columns in The New York Times and serves as a political analyst and frequent commentator on television and radio news programs, including "PBS NewsHour," NBC’s "Meet the Press" and NPR’s "All Things Considered."

“David is one of the premier philosophical and political thinkers and writers of our time,” ASU President Michael M. Crow said. “His deep reflections on society and culture — our values, the importance of personal relationships, having perspective on quests for happiness and joy — are great lessons for our graduating students as they set out on the next chapter in their lives.”

At the forefront of his current work is social fragmentation and what people can do to create a community of relationship and purpose. Brooks is the executive director of Weave: The Social Fabric Project and is leading and supporting efforts to live a life for community rather than a life for self. This will be accomplished through education, information sharing and connecting communities to shift culture and values.

Brooks graduated from the University of Chicago and began his media career as a police reporter for the City News Bureau covering crime for Chicago’s two largest daily newspapers.

In 1986, he joined The Wall Street Journal, where he was a book review editor and film critic. He was later stationed as a correspondent in Brussels for more than four years, covering the Middle East, Russia, South Africa and European affairs. He finished his career at the newspaper as an op-ed editor in 1995 and became a senior editor at The Weekly Standard.

In addition to news reporting, Brooks has authored four books, each taking a unique view of American life. His fifth book, "The Second Mountain: The Quest for a Moral Life" — to be released April 16 — addresses the four commitments that define a life of meaning and purpose.

Beyond his role in the media and as author, Brooks has taught at Yale University in the Jackson Institute for Global Affairs and Duke University’s Terry Sanford Institute of Public Policy. He servers on various boards including New America, a nonpartisan think tank focusing on a range of public policy issues, and as a member of the American Academy of Arts and Sciences, one of the nation’s oldest learned societies and independent policy research centers addressing critical challenges facing today’s global society.