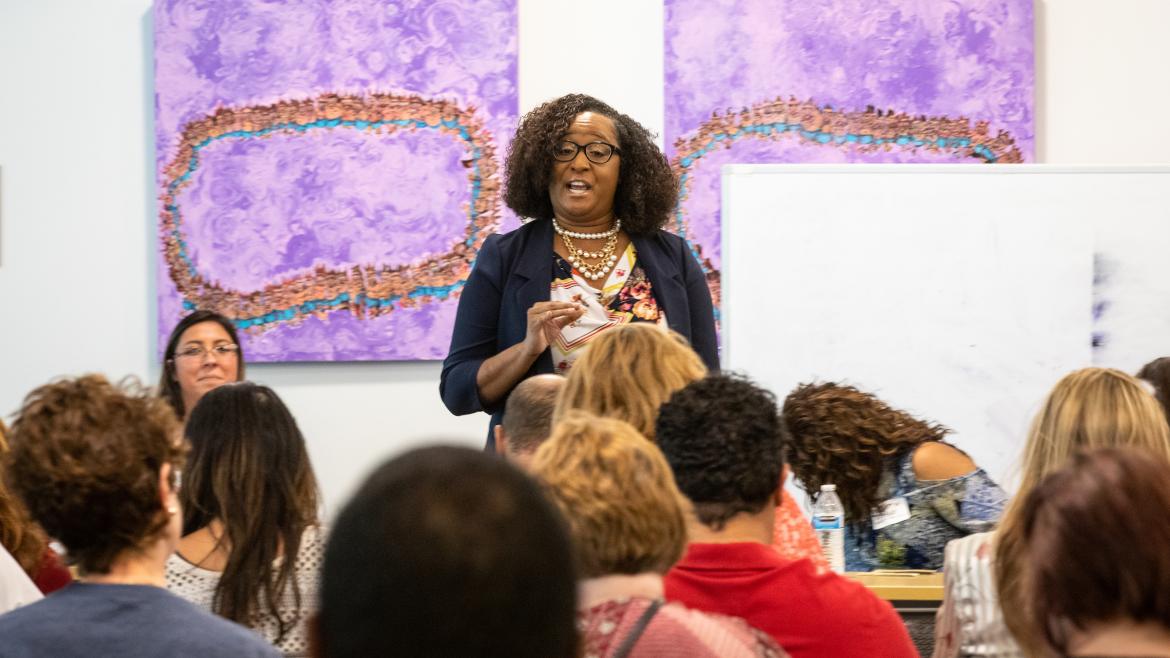 ASU workshop showcases the challenges for those newly released from prison

Shawn served three years in prison for burglary, then walked out to face a dizzying array of requirements he had to fulfill with almost no help and no money. He had to pay for drug testing and probation but wouldn’t get his disability check for another week, and his landlord was demanding a $50 deposit right away.

“Shawn” was one of the characters in a role-playing scenario held Tuesday by the Center for Child Well Being at Arizona State University. About 100 people participated in the “reentry simulation,” each assuming the identity of someone who was recently released from prison. The participants included students, staff, faculty and community members, each of whom received a packet describing their character’s prison record, living and employment situations and everything he or she needed to accomplish every week to avoid being sent back to jail: look for a job, undergo drug testing, pay restitution, pay rent, pay child support, buy food, attend Alcoholics Anonymous.

The simulation was put on by the U.S. attorney’s office and was based on input from real people who have been released from prison. The goal is to demonstrate what it’s like for men and women to make their way through the system.

“We release people back into their communities every day, and with very little instruction,” said Tasha Aikens, a reentry specialist for the U.S. attorney’s office in Arizona, who runs the simulation for any group that requests it.

The simulation was divided into 15-minute segments, each representing one week. The room had 15 stations, representing the obligations of a returning citizen — probation, social services, bank, landlord, etc. Every participant had several tasks to complete each week. 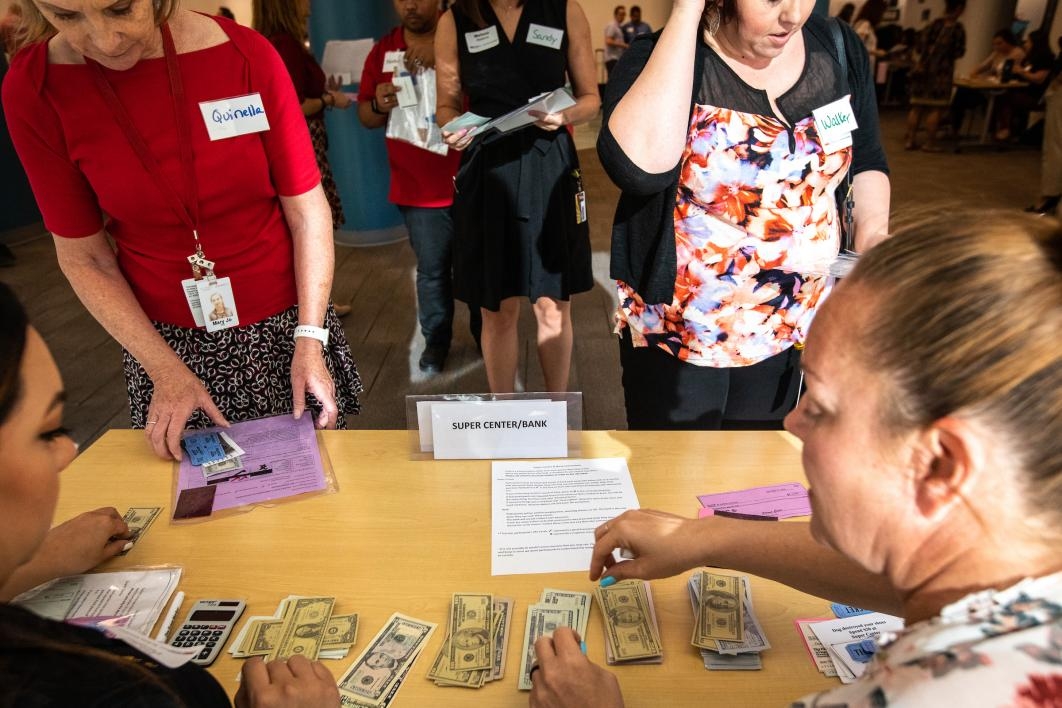 All the participants in the reentry simulation were required to buy bus passes and food, find jobs, get tested for drug use and pay rent. They went from table to table in the room, waiting in long lines, to accomplish each task. 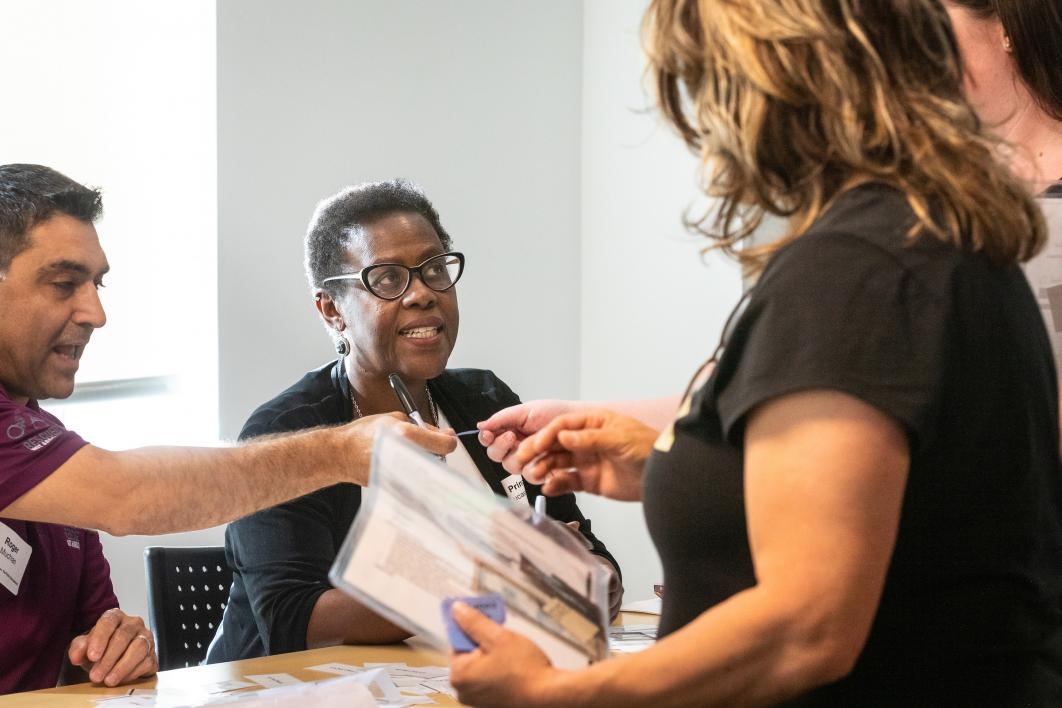 Princess Lucas-Wilson, an instructor in the School of Social Work, volunteered at one of the stations at Tuesday's reentry simulation. 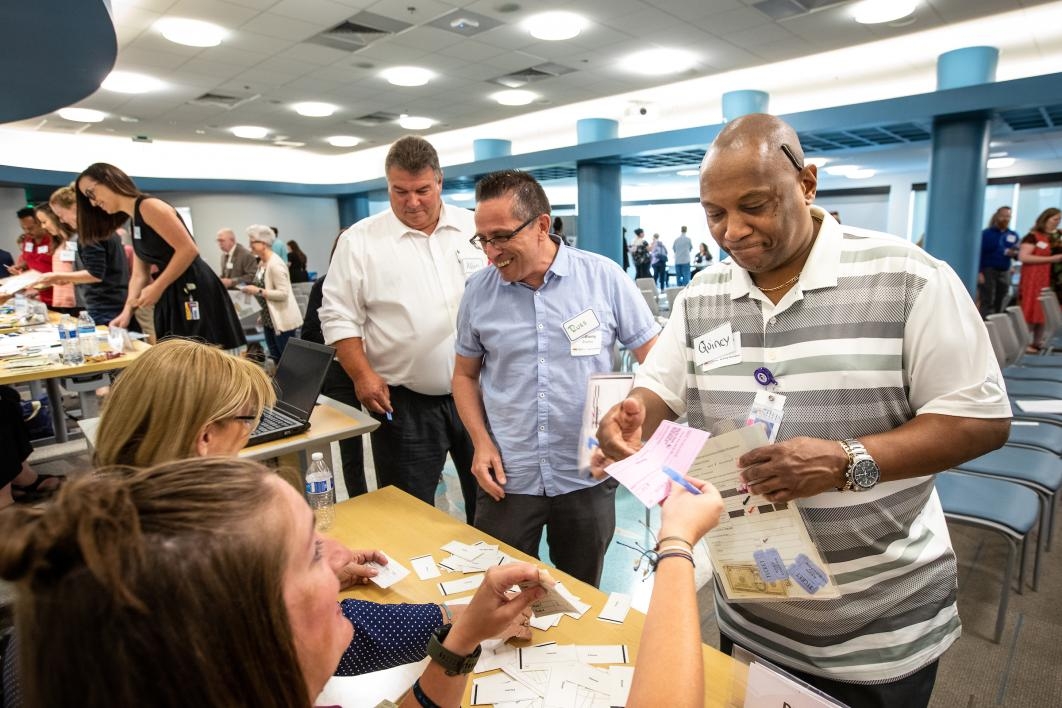 Lawrence Thomas, a social worker who participated in Tuesday's reentry simulation, receives a "check" for $25 after "donating" plasma.

The responsibilities were confusing and overwhelming. Every obligation required a bus pass. Even bus passes could not be purchased without handing over a bus pass.

The first week, Shawn, one of the lucky ones who left prison with $20, was able to purchase the all-important state ID card for $15, then sell his plasma for $25 to pay his $30 probation fee. He went to the “court,” handed over a bus pass and was told he needed to cash his plasma check before paying the fee. So he used another bus pass to go to the bank and cash the check and then another bus pass to finally pay the fee.

The second week was more stressful. Shawn had to wait in the church line to borrow a bus pass, which he used to buy more bus passes, then go back to the church to repay the bus pass before going to collect his disability check.

The simulation included real-life scenarios. Everyone who took a drug test had to pull a card from a deck to tell them whether it was “clean” or not. Every week, the participants received a card with an unplanned situation — like Shawn’s landlord discovering that he had a dog and needed to pay a $50 deposit.

In the third week, Shawn was waiting in line to pay his rent when the sheriff came by, saw that Shawn had not completed his second-week drug testing and sent him back to jail.

In the guided discussion after the simulation, many of the participants described how out of control they felt.

“A lot of it is pretty demeaning,” said Anthony Evans, a senior researcher for the L. William Seidman Research Institute in the W. P. Carey School of Business. The institute is working with Televerde, a call center operator that has been a leader in employing prisoners and people who have left prison. Evans said he decided to experience the simulation to gain insight into what Televerde’s workforce is facing.

“People in positions of authority should be encouraged to attend one of these,” he said.

The process was eye-opening even for practitioners. Molly Hahn-Floyd, a doctoral student at Northern Arizona University who works in adolescent behavioral health, said that during the simulation, she didn’t go to the church or social services or any other place that offered help.

“And I don’t know how many times I’ve preached to people, ‘Ask for help,’” she said.

Jan Wethers, reentry coordinator for the Arizona Department of Corrections, portrayed the mean pawn shop owner, who gave Shawn $10 for a $50 CD player.

“Take the bus sometime,” she told the practitioners. “See what it’s like when it’s hot and you have kids in tow and grocery bags.”

Empathy is critical, but so is responsibility, she said.

“You must hold them accountable. That is very, very important,” she said.

Many participants described how returning to jail felt inevitable — and almost a relief.

“If you’re released to a community and your family wants nothing to do with you and you have no job and no home and you have all these obligations, it makes sense to go back,” Aikens said. “They know your name in jail. You have food in jail. I get it.”

For a person who’s newly released, thinking about returning to prison can be a “comfort zone,” according to Theron Denman Jr., who left prison a year ago. He volunteered at the simulation “treatment” table and addressed the participants during the discussion.

“But that’s not my comfort zone anymore. Volunteering here today is a beautiful thing.”

In the fourth week, Shawn got out of jail, bought bus passes, got food, completed weekly treatment, paid for a drug test and checked in with his vocational rehabilitation case worker. All the boxes were checked.

But it didn’t matter. While he was in jail during Week 3, he missed paying rent. Shawn was homeless.

The reentry simulation was a kickoff to the National Children of Incarcerated Parents Conference to be held next week by the Center for Child Well Being, part of the School of Social Work. The conference will include some events that are open to the public. On Sunday, the opening reception will feature photographer Isadora Kosofsky, who documents prison visitations between parents and children. Additionally, Denali Tiller, director of “Tre |Maison |Dasan” will screen her film and discuss the three young boys featured. On Tuesday, Rudy Valdez, director of HBO's “The Sentence,” will screen his documentary and discuss the effects of incarceration on his nieces. A panel discussion will follow, featuring people who have been affected by incarceration.

Top image: Tasha Aikens, a reentry specialist with the U.S. attorney's office, led a "reentry simulation" Tuesday at the Westward Ho in downtown Phoenix. About 100 students, staff, faculty and community members participated in the workshop, in which they took on the persona of someone who recently left prison and had to navigate all the tasks necessary to avoid being sent back to jail, such as getting a job, being drug tested and paying rent. Photo by Charlie Leight/ASU Now

Finding the “right” job can be tough for anyone, but for military veterans transitioning to civilian life, it can be daunting as they part ways from a highly structured, team-centric environment with unique values and norms not typically found with civilian employers.    Professional services organization Deloitte, in collaboration with Arizona State University, helped address the veteran t...

ASU a major player in microelectronics 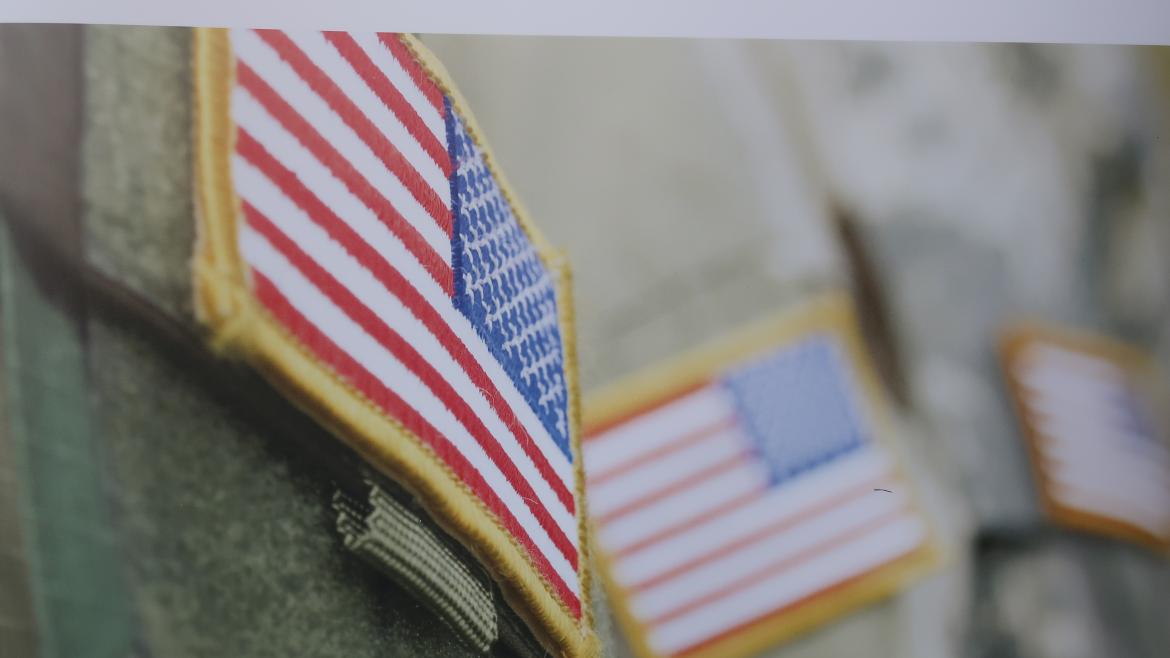 Identifying personal strengths and brand are key to career choice

Finding the “right” job can be tough for anyone, but for military veterans transitioning to civilian life, it can be daunting as they part ways from a highly structured, team-centric environment with unique values and norms not typically found with civilian employers.

Deloitte staff led the workshops to teach student veterans, community service members and local veterans how to find the right career fit by translating their leadership skills into a business context.

“We don’t have all the answers, but we’re going to give you a playbook that will help you get there,” said Dave Grant, a Deloitte management consultant. “That’s the power of this.”

The five-hour workshop is not about resume writing or job interview attire. The intent is to get participants to understand their individual strengths, target career opportunities based on their personal brand, network and efficiently communicate their story to potential employers.

“The beauty of this is that it causes you to one, pause, stop in your tracks and learn about yourself,” said Kevin Whirity, Deloitte military and veteran acquisition lead and workshop instructor. “You will use this content that you walk away with, time and time again.” 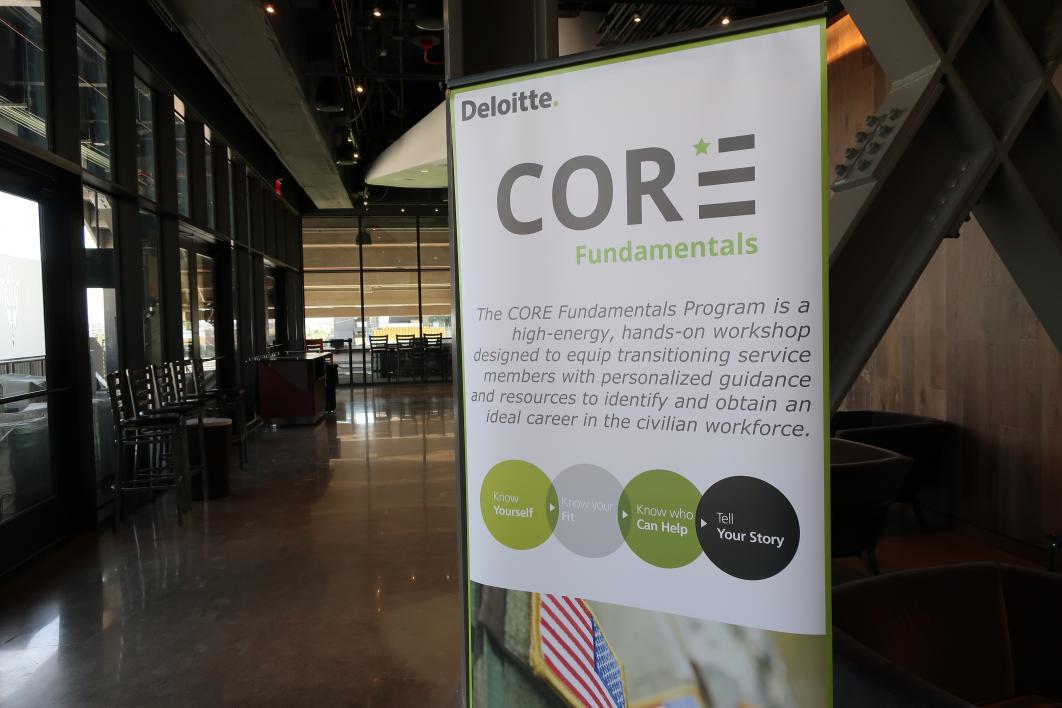 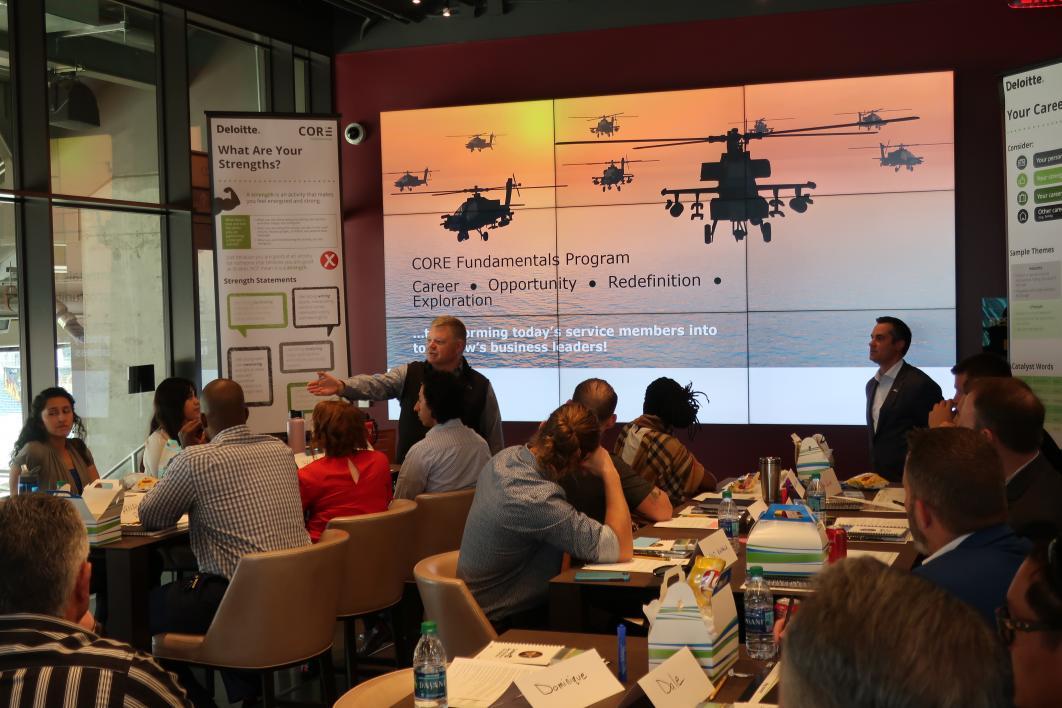 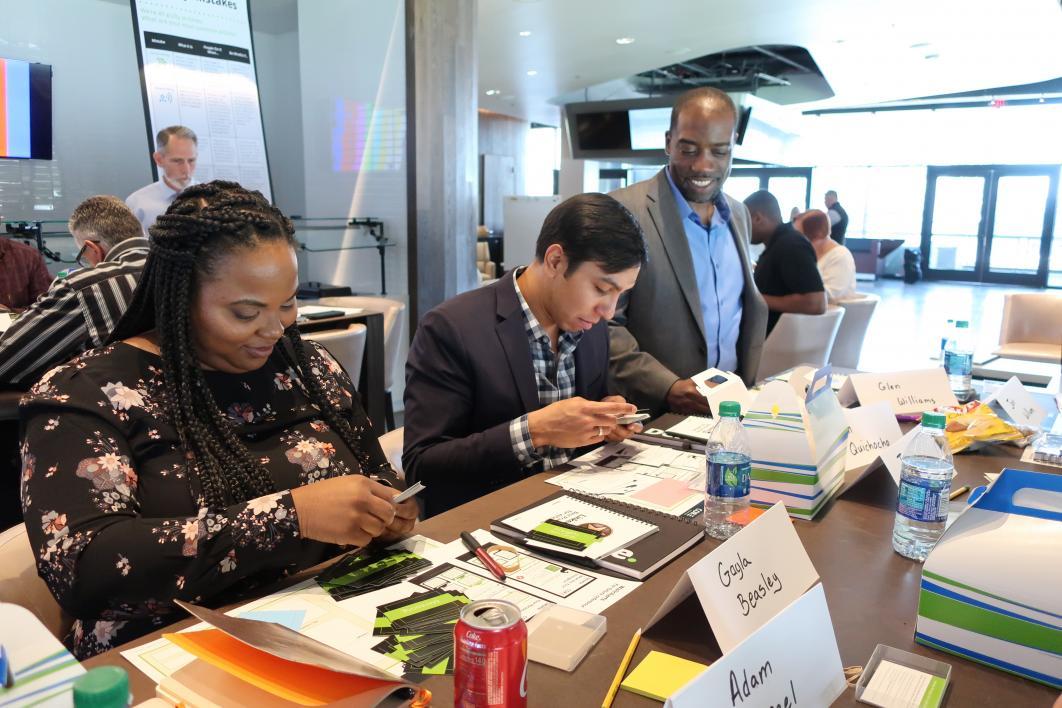 Citing Marcus Buckingham and Curt Coffman’s book “First, Break all the Rules,” Whirity pointed out that according to a Gallup poll referenced in the book, the majority of people in “corporate America” are miserable in their jobs. They are not in positions that make them feel energized and strong.

“Eighty-three percent of folks (are) waking up, not energized, cringing of what’s going to be in the inbox and having to execute tasks that do not energize or play to their strengths,” Whirity said.

By the end of the workshop, participants should be able to better understand their strengths, formulate their brand and be ready communicate it concisely in any environment. Because opportunities can arise anywhere, Whirity pointed out.

ASU student veteran Michael Armendariz attended the workshop after learning about it through the Veterans Scholar Program — a Pat Tillman Veterans Center and Public Service Academy collaboration to promote professional development and public service. The Marine veteran majoring in secondary education with the Mary Lou Fulton Teachers College sees the Deloitte workshop as an opportunity to help him get into the path to achieve his career goals. He recommends it highly to other veterans.

“Take the step forward to do it,” Armendariz said. “Dedicate your time to become better.”

The CORE Fundamentals workshop stemmed from the White House Joining Forces initiative, a program launched by former First Lady Michelle Obama in 2011 to open education and employment opportunities for veterans and their families.

Although the workshop was not a recruiting event, Deloitte announced in November an expanded relationship with ASU that includes “full-time internships, learning opportunities, and direct pathways for students in various disciplines to work alongside Deloitte professionals with industry-leading experience in innovative and emerging technologies.”