The digitally focused, nonprofit media outlet is the largest news website that covers tribes and Native people across the Americas.

“We are delighted that Indian Country Today, the iconic and influential news site, will be coming to Cronkite,” Cronkite Dean Christopher Callahan said. “ICT has long been the leading voice for Native American communities across the Americas, and under the inspiring, innovative and digitally focused leadership of Indian Country Today Editor Mark Trahant, the future is bright. Through this partnership, we will not only be able to provide our students with more opportunities to cover these critically important stories, but also to help better serve our Native communities regionally and nationally and to grow the pipeline of young Native students who may be interested in careers in journalism.”

Callahan said the Cronkite School has been focused on increasing both the quantity and quality of Native American news coverage, which he said is too often ignored or reported in a way that lacks depth and understanding of Native communities.

The Cronkite School also is seeking to create pathways for American Indian high school students to study journalism and enter the field. Callahan pointed to a recent American Society of News Editors survey that found Native Americans represent just 0.37 percent of U.S. journalists, even though Native Americans make up nearly 2 percent of the U.S. population and 6 percent of Arizona residents.

Cronkite News, the student-powered, faculty-led news organization of Arizona PBS, has made Native American coverage a prime area of focus through its news vertical, Indian Country. The school also is in the process of a search for the nation’s first named professorship focused on the intersection of Native Americans and the news media. Cronkite also is working to create one of the first student chapters of the Native American Journalists Association.

“We hope through these initiatives we will be able to recruit more young Native American students to journalism programs like ours while helping to provide deeper and richer news coverage,” Callahan said.

Trahant (pictured above) said expansion plans for the news outlet include the creation of the first-ever national television news program by and about Native Americans.

“We all know the stereotypes and narratives that come out of Hollywood and Washington,” Trahant said. “So a news program, one that reaches millions of people via public television stations, has the chance to change the story, showing the beauty, intelligence and aspirations of Native people.”

Trahant said the move to Cronkite is “game-changing” for Indian Country Today. It “builds on so much of the work that ASU is already doing” with its Native and borderlands coverage, the new research professor and the school’s commitment to diversity in news organizations. He added that the “Cronkite School has become a magnet for great journalism with Cronkite News, Arizona PBS and other innovative programs.”

The majority of the Indian Country Today operation will move to ASU this summer. ICT will keep its digital team in Washington, D.C.

Top photo: Indian Country Today, a nonprofit media outlet covering tribes and Native people, is moving its newsroom to the Cronkite School under a new partnership with ASU. ICT editor Mark Trahant says the expansion is "game-changing" for the news organization and will include the first-ever national television news program by and about Native Americans. Photo by Jaynie Parrish

The Alumni Association is seeking nominations for the second cohort of ASU Leadership Institute. Applications are being accepted now through May 17 for this professional and personal leadership development program. Sun Devils interested in learning more about ASU Leadership Institute are invited to a special reception at 5:30 p.m. Thursday, April 18, at Pitchforks and Corks, 600 S. College Ave. (...

The Alumni Association is seeking nominations for the second cohort of ASU Leadership Institute. Applications are being accepted now through May 17 for this professional and personal leadership development program.

Sun Devils interested in learning more about ASU Leadership Institute are invited to a special reception at 5:30 p.m. Thursday, April 18, at Pitchforks and Corks, 600 S. College Ave. (second floor of College Avenue Commons). The reception will include a brief presentation about the ASU Leadership Institute and an opportunity to meet members of Class 1. 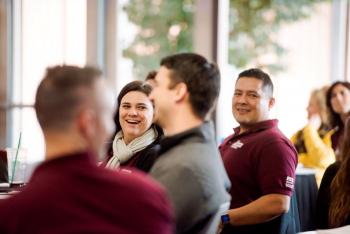 Class 1 of the ASU Leadership Institute participates in a leadership learning exercise with executives from the W. P. Carey School of Business. Download Full Image

“We launched this program to develop the next generation of leaders invested in higher education and impacting their communities,” said Christine K. Wilkinson, ASU Alumni Association president and CEO. “The Leadership Institute immerses participants in ASU’s teaching, learning and discovery environment equipping them with critical leadership skills. We know the importance and value of continued learning and development. Our inaugural class of this program featured a diverse group of individuals who have demonstrated a strong commitment to leadership, civic engagement and making a difference, and we look forward to recruiting a strong class for the second cohort.”

The program will help participants understand and develop critical leadership skills. The cohort of Class 2 will participate in a leadership assessment tool that provides in-depth analysis and insights identifying key strengths to further develop and areas to enhance.

“The ASU Leadership Institute is an incredible program that offers alums the priceless opportunity to remain connected to the vast ecosystem of the university,” said Morgan Dick, director of money in politics for the Arizona Advocacy Network. “The opportunities for continued growth in leadership both professional and personal, shepherded by ASU, has been a transformative experience.”

ASU Leadership Institute features nine ASU Innovation Days throughout the course of the program led by experts from fields including business, military, nonprofit management, media, health and science, technology, design and the arts, and applied-use research. The programs works to enlighten, inspire and transform leaders from a variety of professions and communities.

“The Leadership Institute has given me a closer look at what makes ASU No. 1 in innovation,” said Class 1 member Brian Lee, chief financial officer for Landings Credit Union. “Besides gaining access to discover the diverse programs at ASU, we have also engaged in dialogue with the amazing leaders who are constantly finding ways to advance the work at ASU.”