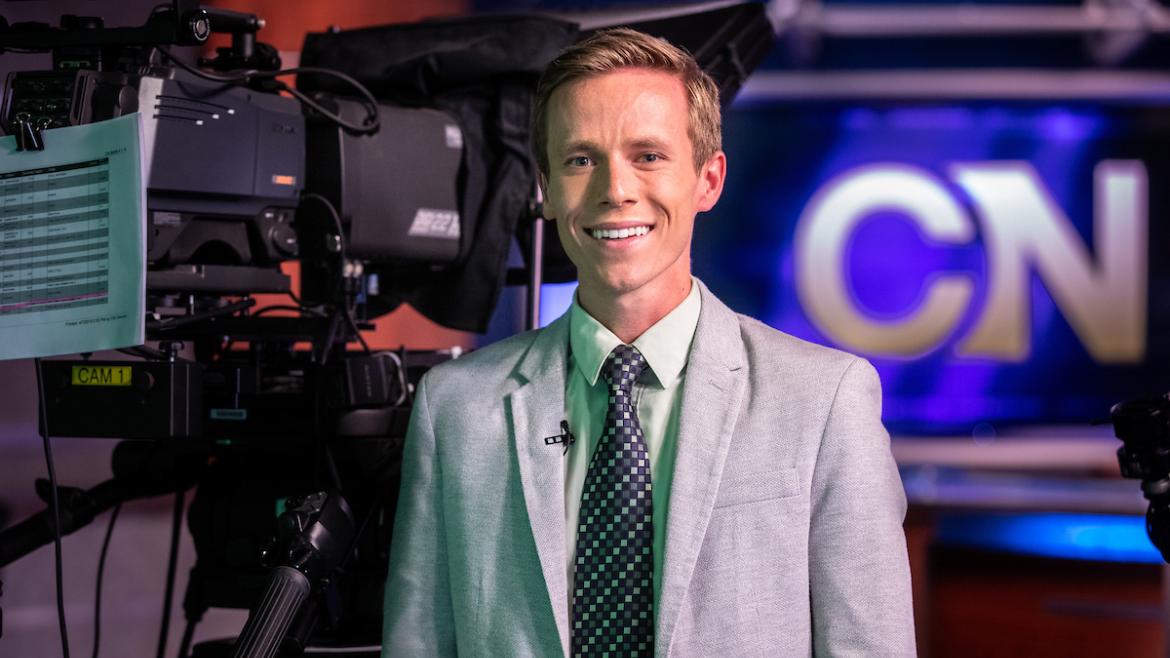 Cronkite student said 'yes' to opportunity and 'no' to all roadblocks

Arizona State University’s Bryce Newberry is a "yes man" in the best sense. He's always up for a challenge and never shies away from a new opportunity.

The Wenatchee, Washington, native rarely said “no” when it came to his academic career at ASU. This has served him well as a student and as a journalist.

“I do have a hard time saying no but I’m of the belief that when a student is in college, you should say yes to as many things as possible,” Newberry said. “You never know what might lead to something else.”

That attitude not only helped Newberry, who is graduating this month with a bachelor’s degree from the Walter Cronkite School of Journalism and Mass Communication, but it netted him this year's student speaker at the Cronkite School convocation May 7. The speaker represents the best of the Cronkite School, taking into account academic achievement, service, leadership, and professional experience while gained in school.

Wherever his job will take him, he said the Cronkite School will remain close to his heart.

“The Cronkite School was the only journalism school where I applied because I knew it was for me,” Newberry said. “I have loved being here and it’s been the best experience.”

Question: What was your “aha” moment, when you realized you wanted to study journalism?

Answer: When I was attending a summer camp around the age of 7, I found out that one of my camp counselors was in college to be a “news anchor.” At that age, I had no idea what that meant, but found out that a “news anchor” was the person “on TV who gives you the news.” Coming from a small town, I also thought you had to be in New York or Los Angeles to be on TV. I started watching the news for hours a day  — to the point that I wasn’t allowed to watch at night, because I’d go to sleep scared — and really came to love TV news. I visited my first TV news studio in the sixth grade (KOMO News in Seattle, Washington) and was totally amazed at how everything worked. From there, I was hooked and knew it was exactly what I wanted to do.

Q: What’s something you learned while at ASU?

A: I learned a lot of things — and am still learning — but one thing that will be valuable forever: You can’t be everything at once. There are times you need to be a good friend, a good worker, a good student, a good sleeper — but chances are you can’t be all of those things at once. And that’s OK. I learned it’s important to be good at a lot of things, but not perfectly nor constantly. Oh, and this: Don’t be distracted by others’ successes. Celebrate, but don’t get distracted, because you are your only competitor and only you can ensure your own success.

A: I visited the Cronkite School after my freshman year of high school to do a story for Teen Kids News on Walter Cronkite’s legacy living on through the school. I interviewed Associate Dean Mark Lodato for the piece. He gave me a tour of the building and showed me how everything operated. Again, I was hooked and knew it was exactly where I was meant to be. I kept in touch with Dean Lodato over the next couple of years and didn’t apply to any other university when it finally came time to go to college.

A: My best advice would be to say yes to everything. My mom would probably disagree, but seriously, it was rare that I said no to an opportunity. At Cronkite, opportunities were seemingly endless and you really never know what will lead to something else. I’d also say to take care of the people around you. Your classmates are friends who may eventually be coworkers or even lifelong friends — it is not a competition and we (you) are all in this together.

A: The Cronkite News newsroom and studio was always a special place, besides Starbucks, of course. But every morning, people would come in with big ideas and come together as a team throughout the day to execute those ideas. And every day, ready or not, the show went on at the same time. It was the home of innovation, collaboration, learning, and most importantly, a team of so many dedicated people working on stories that matter.

A: I would like to be a broadcast reporter, but I don’t know where that will be just yet. There’s a lot of cities on my radar.

A: This may take more than $40 million, but I think everyone needs access to the internet. It’s an incredible tool, often taken for granted, that can open a whole world of opportunities. It’s also a place where information is readily available and news is more accessible than ever. By giving people a tool to be more informed, the world can be more educated and aware, hopefully resulting in more active and engaged citizens.

Sun Devils Fall in Series Opener at No. 4 Washington

The No. 24 Arizona State softball team fell, 8-4, to No. 4 Washington in the first of three games at Husky Softball Stadium Friday afternoon. ...

Sun Devils Fall in Series Opener at No. 4 Washington The No. 24 Arizona State softball team fell, 8-4, to No. 4 Washington in the first of three games at Husky Softball Stadium Friday afternoon.