ASU leans into role as international presence and player in Washington, D.C.

The Ambassador Barbara Barrett and Justice Sandra Day O’Connor Washington Center at Arizona State University just turned 1, but success has it growing in stature and size.

The formula? Offer a one-of-a-kind urban experience in an intimate setting.

ASU students are discovering the nation’s capital is made up of more than just museums, government agencies and historic buildings. It also offers invaluable learning opportunities, real-world practice and rich cultural experiences in a major cosmopolitan city.

“I’d describe my experience here as invaluable to my education,” said Cristian Payan, a graduate student in the Sandra Day O’Connor College of Law. “You don’t get an opportunity like a personally guided tour of the U.S. Capitol by someone like Congressman David Schweikert every day — and when you do, you have to make the most of it.”

Payan has been living in Washington, D.C., since January. In addition to touring the Capitol, the Smithsonian, the Lincoln Memorial, the Washington Monument and the Vietnam Veterans Memorial Wall, he said he’s taking law classes with professors of practice and is currently interning with the United States Agency for International Development. He’s also creating valuable networking opportunities that will come in handy when he graduates this May.

“Living here is a good way to gain some perspective on a national level,” Payan said.

ASU has long hosted students, faculty and staff in Washington, D.C., but with its dedicated 32,000-square-foot, eight-story center in a historic building at 1800 I St. NW, a mere two blocks from the White House, it has become an international presence and player in the nation’s most powerful city.

“We have massive visibility on a critical corner in downtown Washington, D.C. ASU is lit up in big letters, and it’s obvious to all that we are here,” said former Ambassador Michael C. Polt, senior director of leadership programs at the McCain Institute for International Leadership. “Policymakers, influencers and think-tankers around this town and from around the country come into this building. We are a convener for researchers, politicians and academics on important issues. Important decisions that affect a lot of Americans are made here, and ASU is now part of that conversation.”

Those issues are as deep and wide as the offerings and initiatives based at the Washington, D.C., location. In addition to the McCain Institute, the building also houses programs from the Walter Cronkite School of Journalism and Mass Communication, Cronkite News/Arizona PBS Washington Bureau, the Academy for Innovative Higher Education Leadership, the Center on the Future of War, the Global Security Initiative and the Consortium for Science, Policy and Outcomes, among others.

These programs are strategically placed and right where they need to be because it amplifies ASU’s voice in national conversations, said ASU’s Cheryl Bassett, the director of Combatting Human Trafficking Training Initiatives at the McCain Institute.

“Our location is fantastic because lots of national stakeholders are in the general vicinity of this building — because all roads lead to Washington, D.C.,” Bassett said. “We bring knowledge from the field to D.C. to think about issues on a national level. It certainly is the perfect place for us to develop partnerships.” Cronkite School students (from left) Andrew Howard, Keerthi Vedantam and Alyssa Klink make their way to the Capitol via the Metro in Washington, D.C., on March 13. The students are part of the Cronkite News Washington bureau and work pursuing stories on Arizona and tribal issues. 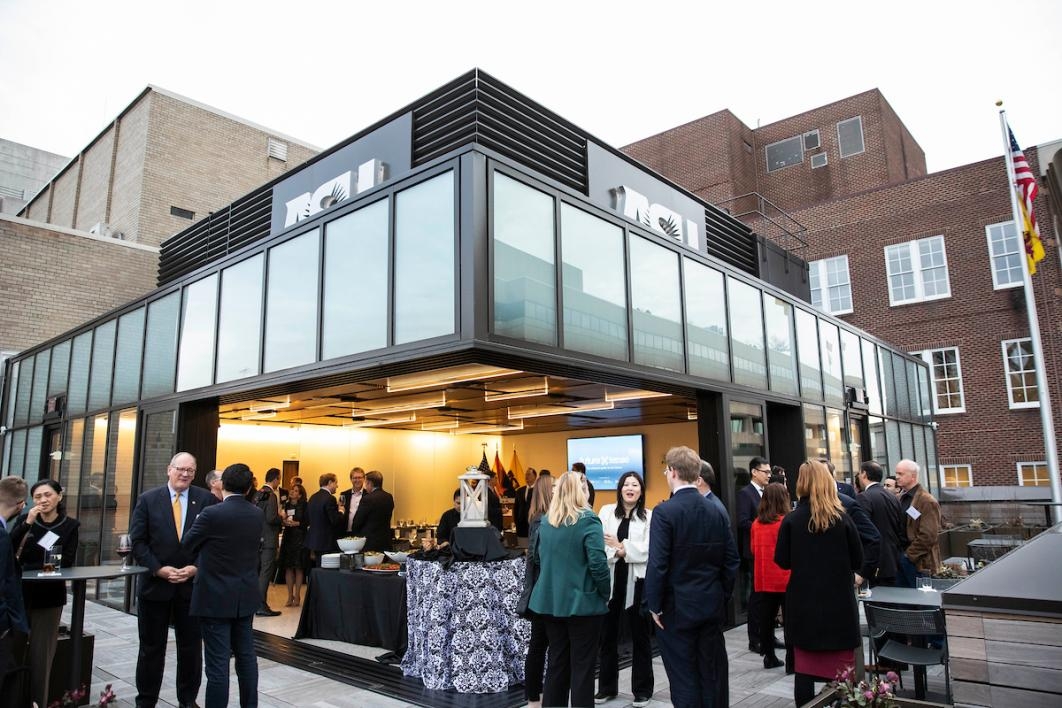 Visitors and panelists enjoy a reception and dinner prior to the Future Tense reception and panel on U.S.-China relationships at the Barrett and O'Connor Washington Center on March 13. 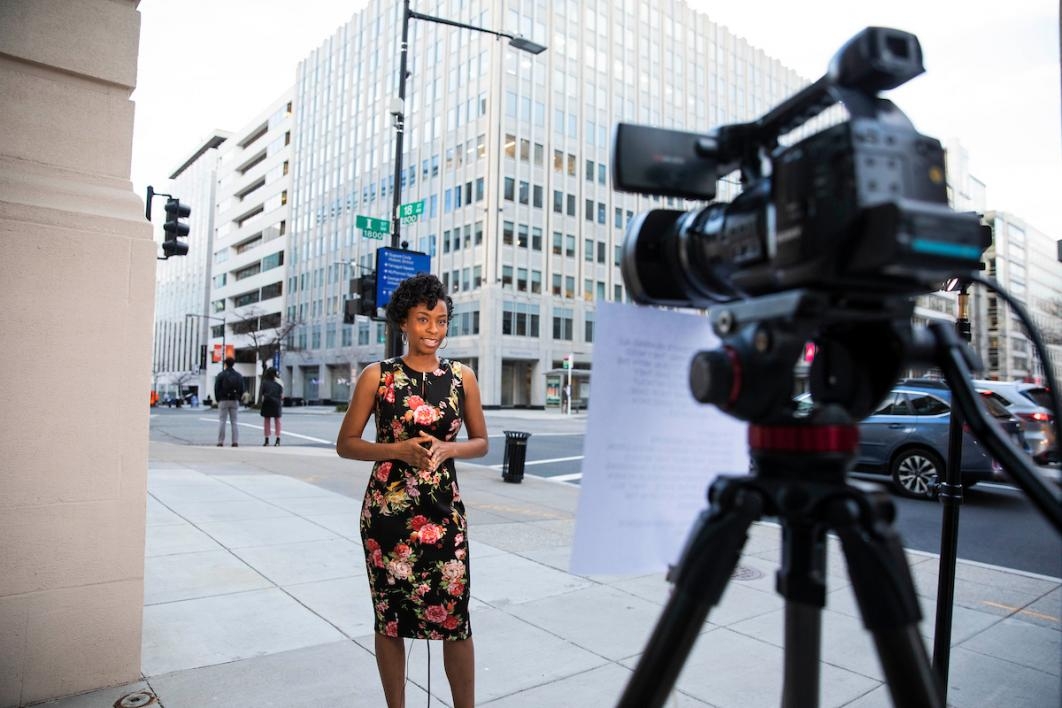 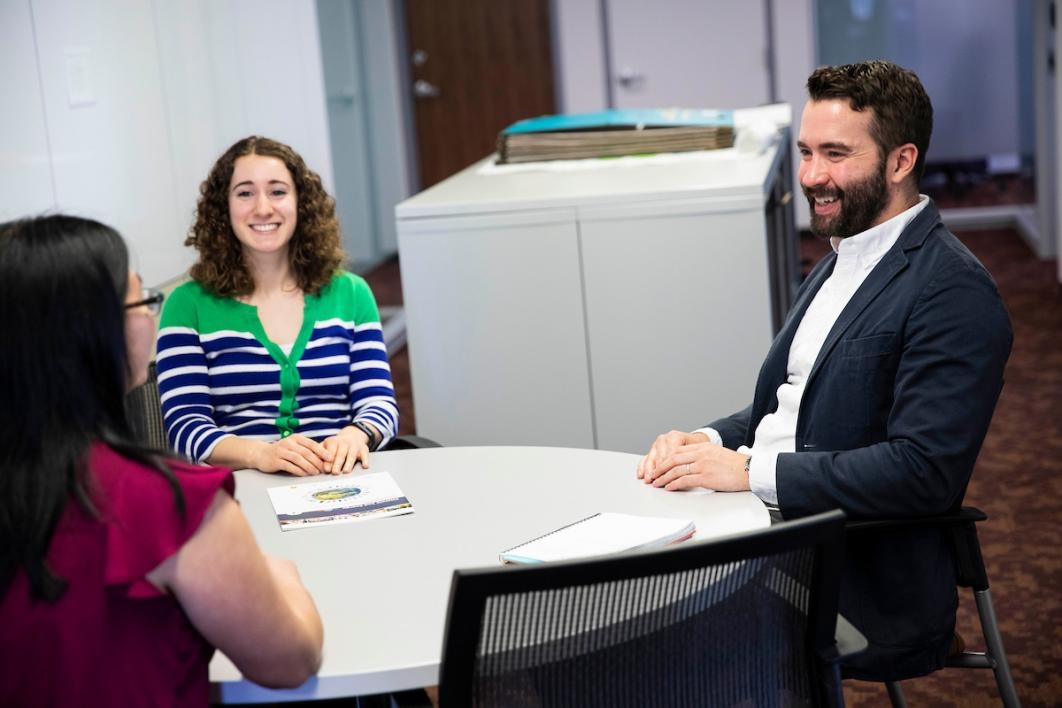 Leah Kaplan (center), Jason Lloyd and Kimberly Quach discuss upcoming workshop plans at the office of the Consortium for Policy, Science and Outcomes at the Barrett and O'Connor Washington Center on March 15. Law students attend a course in the evening at the ASU center in Washington, D.C., on March 13. Ambassador Edward B. O'Donnell (not pictured) leads students in politics and law through a practice of German-American relations concerning the Boeing 737 MAX scandal during "Policy Design Studio 484 – Diplomacy in Action, the Embassy Country Team" in mid-March. 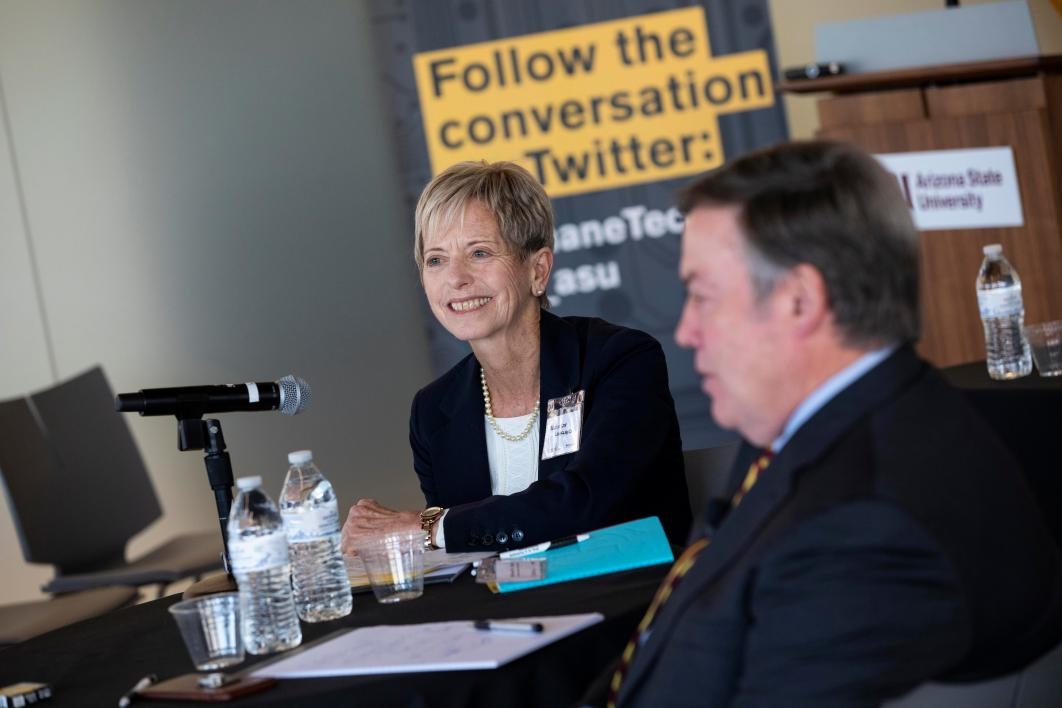 Elizabeth Langland (left) speaks with ASU President Michael M. Crow during the Future of Humane Technology symposium at the Barrett and O'Connor Washington Center on March 14.

Those partnerships include think tanks, federal research agencies, policy councils, nonprofit organizations, national associations and other colleges and universities who are focused on society’s most pressing challenges related to education, health, economic development, the environment, social justice and other global issues.

“The center offers a constantly expanding menu of ASU learning opportunities,” Freakley said. “Students also participate in debates, hearings on Capitol Hill and attend think tank events focused on the leading issues both domestically and abroad. Our students return to ASU with new ideas and concepts to explore with faculty and fellow students, given their remarkable semester in Washington, D.C.”

For journalism major Imani Stephens, the city offered her “an opportunity to be on the front lines of history.”

“I reported on the passing of Arizona Sen. John McCain, the protests for Brett Kavanaugh’s Supreme Court hearings and the 2018 midterm elections,” said Stephens, who spent fall 2018 in the nation’s capital. “I had journalistic opportunities on the national level and reported alongside CNN, MSNBC, NBC and other network news organizations. And here I was a college student going up against veteran journalists who had been doing this a long time.”

In addition to reporting for Cronkite News, Stephens took an internship with CBS Evening News, interviewed high-level politicians, met with sorority sisters at nearby Howard University and visited historic stops throughout the city on Washington’s world-class Metrorail system.

“I was pushed out of my comfort zone, but it made me a more-rounded person,” Stephens said. “I’m so much more aware of things and issues today. You can’t learn if you stay in one city or town for the rest of your life.”

Payan and Stephens’ experience is typical of what can happen in Washington, D.C., said Julia Fromholz, a professor of practice at ASU Law.

“Students are able to get work experiences in organizations or agencies that just don’t exist outside of Washington, D.C.” said Fromholz, who serves as director of the International Rule of Law and Security program at ASU’s Sandra Day O’Connor College of Law. “It’s given them a broader perspective of what they can do after they graduate.”

That perspective will be broadened for more students as the campus expands next week. In February, the Arizona Board of Regents approved a lease for an 8,400-square-foot space in a nearby building because programs at the location are becoming more popular and growing faster than expected. That’s not a surprise to Amanda Petersen, an ASU Law graduate who studied for a semester in Washington, D.C.

“The professors that teach courses in Washington, D.C., are extremely well-known in their respective fields, and it’s an awesome way to learn,” said Petersen, who graduated in May 2018 and now works for the Maricopa County Attorney’s Office. “The class sizes were also more intimate, and it gave us more time to get to know our classmates and instructors. You experience a lot together with a group of people.”

For Petersen, some of those one-of-a-kind experiences included watching President Donald Trump’s inauguration and the 2017 Women’s March, which took place a day later. She also experienced snow and cold weather and watched the cherry blossoms reach peak bloom in the spring.

“In many ways that semester in Washington, D.C., was like a study abroad experience,” Petersen said. “I think fondly of my time there.”

When Connor Vuong, a senior in The College of Liberal Arts and Sciences at Arizona State University, first applied to join the ASU Academic Bowl during his freshman year, he saw it as an extension of the trivia competitions that defined his high school years in Ahwatukee. Now in its 13th year, the event brings together teams from across ASU disciplines for a three-day trivia match with questions s...

When Connor Vuong, a senior in The College of Liberal Arts and Sciences at Arizona State University, first applied to join the ASU Academic Bowl during his freshman year, he saw it as an extension of the trivia competitions that defined his high school years in Ahwatukee.

Now in its 13th year, the event brings together teams from across ASU disciplines for a three-day trivia match with questions spanning pop culture, history, political science and more. The top four teams face off on the final day for a $24,000 grand prize, followed by second and third prizes of $10,000 and $5,000, respectively. Vuong is slated to receive a bachelor’s degree in biochemistry from The College’s School of Molecular Sciences this May. This week, as the captain of The College of Liberal Arts and Sciences gold team, he competed in the Academic Bowl for a final time — and won.

“It was a lot of fun competing throughout the years at ASU, so it’s a little sad that it was my last,” he said.“ I’ve done it every year of my undergrad and been on a winning team three times, so of course it feels good to leave with one more win.”

Aligned with previous competitions, Academic Bowl participants from The College were split into “gold” and  “maroon” for the 2019 event. Vuong said it’s typical for units like The College, W. P. Carey School of Business and the Ira A. Fulton Schools of Engineering to send two teams because of their size. The three have jostled for the competition’s grand prize trophy and scholarship money over the last decade.

“I think the diversity of majors in The College definitely adds to the success of our teams because we have a deeper knowledge base to pull from,” he said. “Our teams this year were mainly biological science majors, but we also had anthropology and music majors who could fill the spaces where our abilities lacked.”

Teams spend a few months preparing for the trivia competition with weekly meetings covering a wide range of potential questions and learning to work together as a team. Their coordination was one facet Jeffrey Banner, the assistant director of academic services at The College and one of two advisera for the teams, said was highlighted this year.

“Based on the trivia format, it can be easy for a single player to dominate things, that’s why I really enjoyed that ours was actually a team effort,” he said. “This was a showcase of some of our best students, each contributing their skills in a very substantial way.”

Banner estimates the Academic Bowl’s grand prize has gone to teams from The College around eight times since the event’s inception in 2006. He said the cross-disciplinary spirit of the unit as a whole is part of what distinguishes participants, year after year.

”Especially with the new name, we have really been identified as the academic heart of the university that touches many facets of the knowledge enterprise st ASU,” he said. “This competition is a place where the interdisciplinary knowledge cultivated at The College can really be demonstrated.”

Thursday’s final competition will air on Arizona PBS in May or early June. Date and time TBD.