A $2.5 million grant from the U.S. Department of Education is funding a major collaboration to improve education. The Consortium for Open Active Pathways will use technology to increase the availability of college-level educational materials. Arizona State University's Mary Lou Fulton Teachers College is the lead unit in the consortium that partners ASU with three of America’s largest community college systems: the Maricopa Community Colleges in Phoenix, Miami Dade College (Florida) and Ivy Tech Community College (Indiana).

The consortium aims to benefit 100,000 students through access to open educational resources — OER — that provide students with better learning outcomes than traditional textbooks while saving them millions of dollars. OER are freely available academic materials that can be downloaded, edited and shared to better serve all students.

Ariel Anbar is the principal investigator for the Consortium for Open Active Pathways project. A President’s Professor at ASU, Anbar is on the faculties of the Teachers College, the School of Earth and Space Exploration and the School of Molecular Sciences. He is also director of ETX, ASU’s Center for Education Through eXploration, which will lead the consortium. Anbar said he became interested in OER as a way of improving online education.

“In the last decade, we've gone from higher education looking skeptically at online teaching to embracing it,” Anbar said. “But what we embraced in the first wave of online learning is a virtualization of the passive, lecture mode of instruction where the focus is content, content, content. I want to use digital technology to improve the quality of how we teach across the board, taking the principles we call active learning — constructivism, learning by doing, those kinds of things — and bringing them into the online world through open educational resources.”

Anbar calls the resulting offerings “active OER.” He said the idea of COAP is to produce not only active OER modules but also a tool that enables an instructor to assemble a package of those and other openly licensed digital materials into a suite of resources. “So they could have a sort of virtual textbook,” Anbar said. “A no-cost digital textbook available to students that includes some of these active modules and is also available in print form for a low cost.”

But he said active OER should be more than online textbooks. They can provide a suite of resources encompassing the entire body of intellectual material for a course, and all of it open for access, editing and sharing.

“When you say textbook, that evokes just reading,” Anbar said. “But when you're in the digital realm working with open resources you can do all sorts of things beyond the text, taking maximum advantage of the digital medium. And ‘active’ means digital resources that involve simulations that are interactive but also adaptive. The learner doesn’t just move something around in the simulation but actually gets prompting feedback that guides them to success.” Anbar calls this feedback guided active learning or digital tutoring, a system provided by the Smart Sparrow platform, another partner in the grant.

Student success is a goal

“We will do a pathways analysis, taking a look at these degree programs to figure out where are those critical points where the active OER we create could have the most bang for the buck,” he said.

The other higher-education partners in the project — the Maricopa Community Colleges, Miami Dade and Ivy Tech — were chosen for their size and because they are members of Inspark. A digital teaching network of more than 50 colleges and universities worldwide, Inspark was created by ASU’s ETX and Smart Sparrow with a $4.5 million grant from the Bill and Melinda Gates Foundation.

Through Inspark, faculty members at the community colleges will be provided an open course builder that draws from Active Mesh, a newly created catalog of existing OER. From there they can select existing learning resources and combine them with new, high-quality active OER developed for the project. Initially, Active Mesh will focus on materials for courses that lead to associate degrees in the health sciences, a popular choice among community college students.

The grant also provides funding for designated faculty members on the community college campuses to assist their colleagues with the implementation of the active OER modules.

“We learned from the Gates Foundation project that having local champions is absolutely vital," Anbar said. "You've got to find those faculty members who are ready to do something new and help them help us figure out how to turn it into something that can reach others.”

Student savings is another

Matthew Bloom, an English instructor at Scottsdale Community College in the Maricopa Community Colleges district and a member of the college’s OER task force, is one of those local champions. 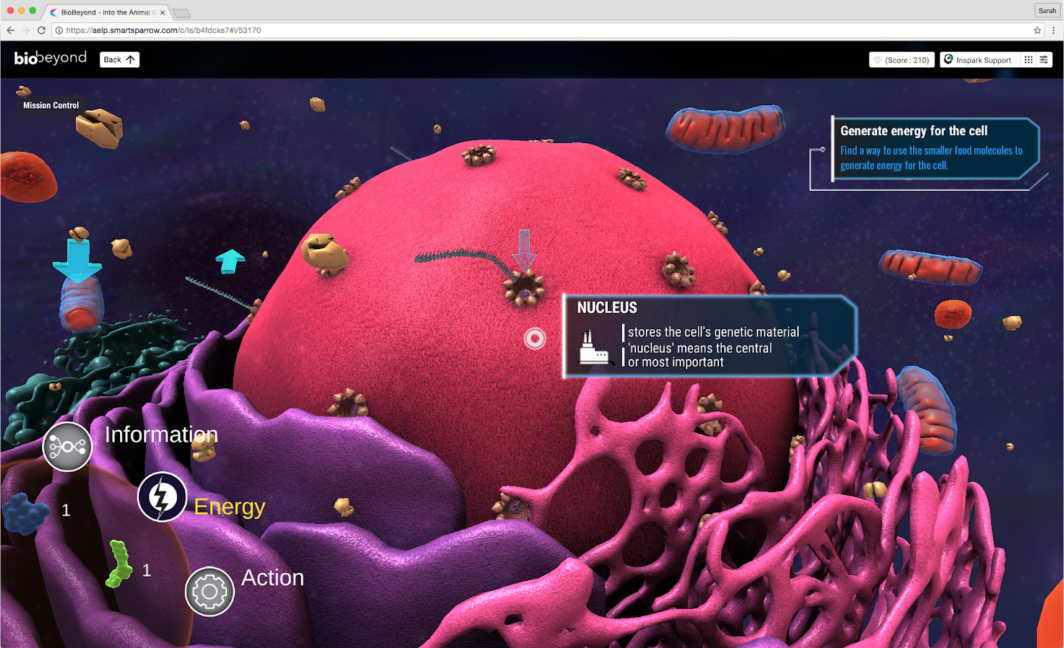 “Into the Cell” is a digital active learning experience contained in BioBeyond, an online course offered at ASU and through Inspark. The project will produce such experiences as OER. 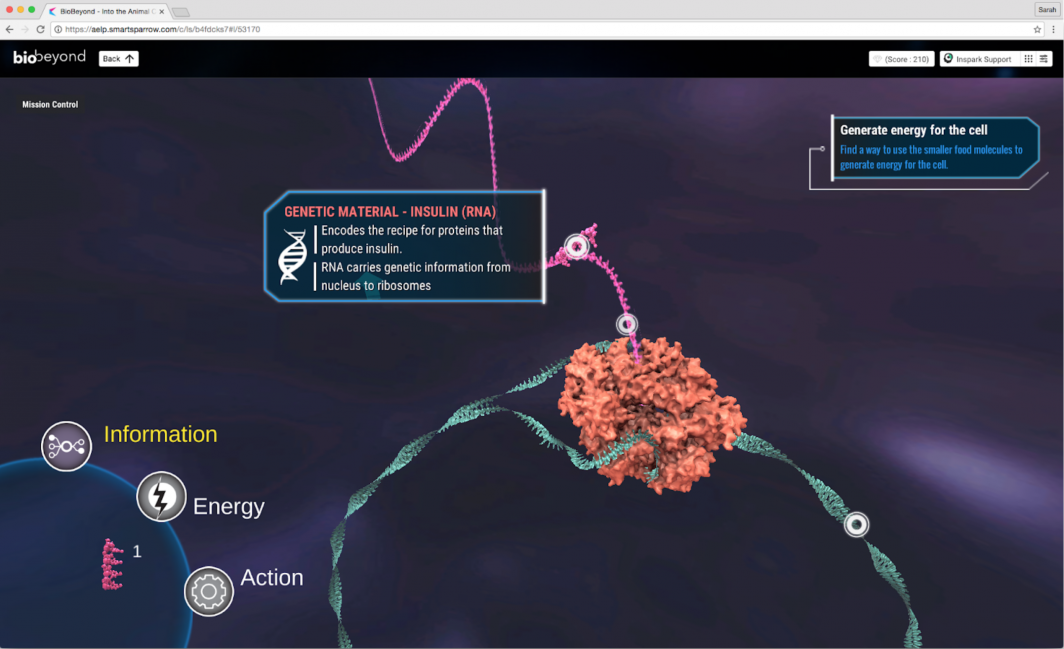 The consortium will initially focus on open educational resources for health-related fields, a popular choice of community college students. 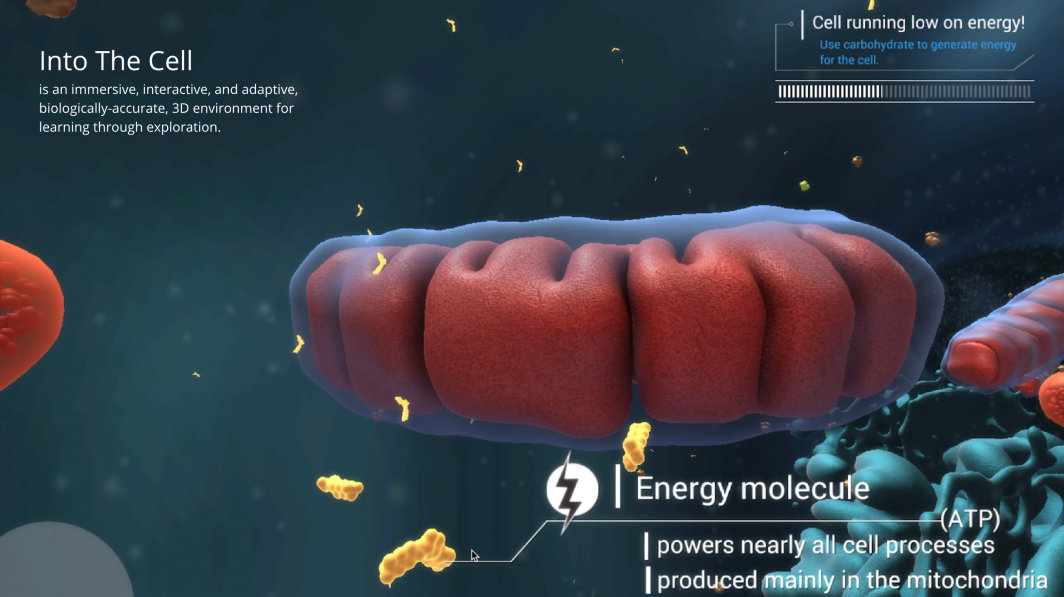 Active OER provide not only learning resources but immediate online prompts and tutoring.

“My experience is that many faculty members are excited about the prospect of using OER but not everybody has time to go out and find them,” he said.

Bloom surveyed his colleagues in 2015 about their use of OER, finding that nearly half the respondents said they use OER for their courses.

Maricopa Community Colleges (MCC) has been a leader in the OER movement, particularly for the cost advantages it offers students. Bloom’s survey found that 62 percent of MCC’s faculty who used OER reported savings of at least $75 per student. Since 2013, MCC’s Maricopa Millions OER project has funded the development of more than 20 complete courses and saved students more than $15 million through OER and other no-cost or low-cost course materials in place of traditional textbooks.

But Bloom emphasizes that, while the savings OERs provide are important to students, “It’s also about access. When students get an online book at low- or no cost, they can get it immediately and are more likely to start reading it immediately.”

Bloom emphasized the distinction between free materials and open.

“Free is great,” he said. “But open is better because the open source licenses explicitly permit students, faculty and everyone else in the world to freely, immediately and permanently access and generate knowledge.”

“It’s valuable for them to be able to be able to partner with a research university like ASU,” he said. “And it helps us live up to ASU’s mission of universal learning: reaching as many students as we can, at all stages of work and learning and from all backgrounds, with educational and skill-building opportunities.”

Biomolecules, such as DNA and proteins, are not static structures. They undergo complex conformational changes that are essential to their functioning and the signaling pathways they belong to. Understanding these changes is pivotal to a deeper comprehension of how the body works and could eventually shed light on certain diseases that afflict us.Recent advancements in DNA nanotechnology provide i...

Biomolecules, such as DNA and proteins, are not static structures. They undergo complex conformational changes that are essential to their functioning and the signaling pathways they belong to. Understanding these changes is pivotal to a deeper comprehension of how the body works and could eventually shed light on certain diseases that afflict us.

Recent advancements in DNA nanotechnology provide insight into the subtle role of biomolecules. Channeling DNA’s chemical and physical properties will aid the study of other structures. For example, new DNA origami technologies have allowed researchers to fold DNA strands into any shape they choose on a nanoscopic scale. 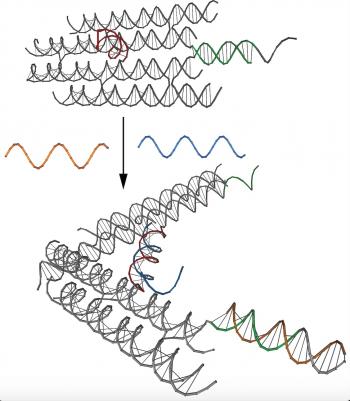 These nanotweezers were fabricated by reconfiguring strands of DNA, and they have two states: open and closed. Download Full Image

These nanotweezers were fabricated by reconfiguring strands of DNA, and they have two states: open and closed. In the past, this change between states has been triggered by a burst of ultraviolet light.

Nicholas Stephanopoulos, an assistant professor in the Biodesign Center for Molecular Design and Biomimetics and the School of Molecular Sciences, and his postdoc, Minghui Liu, teamed up with Angela Stelson and the Radio Frequency Electronics Group of the National Institute of Standards and Technology to evaluate the effectiveness of this method.

This collaboration originated from a conference that both Stephanopoulos and Stelson attended. When the two found themselves discussing their projects at a conference dinner one night, Stephanopoulos proposed that she use the DNA nanotweezers his lab had developed to test her detection method.

“We had this microwave microfluidic device, and basically, all we had measured was salt water. We were confident that it would work, but we didn’t have a system in mind,” Stelson said. “I was talking to Nick, and I said that I wanted a system with a simplistic conformational change, so he said, ‘If you want a simple change, we have these DNA nanotweezers that we think would work well with your project.’”

This microfluidic device essentially measured the electromagnetic properties of the solution in which the DNA nanotweezers were suspended for both their open and closed state. The change noted between the two states confirmed that the method could be used in detection.

“This project highlights the fact that a chemical change induces a change in the electrical property,” Stelson added.

Currently, to measure conformational changes, researchers label structures with fluorescent dye, but this can upset the natural properties of the assemblies, and processing these samples is a lengthy and potentially costly process.

“For many proteins, especially membrane proteins, it’s very difficult to label them,” Liu said. “When you do, you introduce an extra molecule that changes its surface charge and its composition. But with this method, you don’t need any labelling.”

According to Stelson, the associated device that measures these electromagnetic properties is portable, cheap and safe to use in any lab environment.

“That is an advantage that we want to emphasize. Anyone could use this in their lab.”

Although this paper is a proof-of-concept for a novel method, the researchers believe it won’t be long before the detection method will be available for new applications.

“What I would like to do is ask how you can use this to measure interesting things,” Stephanopoulos said. “What are some interesting protein-based systems we can use, and how can we use a DNA system that will amplify the signal? Using this method, we could probe things we wouldn’t otherwise probe.”

The researchers are currently in the process of attaching two different proteins to these nanotweezers and using the method to measure the associated protein-protein interactions.

“We’ve got some plans to do some in situ measurement where we attach proteins to the end of the tweezers, and we are trying to understand what chemical mechanism of the opening of the tweezers causes the electrical changes.”

Along with these studies, the researchers will continue to refine the protocol, improving the time resolutions of its measurements and reducing its cost.

A better understanding of these assemblies’ structure and the interactions between them could confer down-the-line applications in diagnostics, treatments and the synthetic assembly of naturally occurring proteins.

Although this paper’s findings confirmed an easier method for detection, it is also a testament to the community of researchers who are open to collaboration.

“This project is a perfect example of why you should go to conferences and talk to people you wouldn’t otherwise talk to,” Stephanopoulos said. “If I sat three seats down, I would have never spoken with Angela. It’s a funny sort of serendipity of the meeting of the minds — she had never heard of DNA nanotechnology. That’s the fun part of science: meeting people from different disciplines and being able to collaborate with them.”