ASU Gammage has announced its 2019-2020 Desert Financial Broadway Across America – Arizona season. Tempe audiences will come together for a monumental season complete with an electric mix of the hottest shows on Broadway, Valley premieres, Tony Award-winning shows and the return of a few audience favorites.

The 2019-2020 season kicks off this fall with the love and war story of "Miss Saigon," followed by the romantic musical "Anastasia," along with "Summer" — the biographical musical of the late "Queen of Disco," Donna Summer — and the new production of the classic "Fiddler on the Roof." The season lineup continues with a journey to the Caribbean in Tony Award-winning "Once on This Island;" one show that is truly “fetch” on Broadway, "Mean Girls;" and the remarkable true story of 7,000 stranded passengers after 9/11 and the small town that welcomed them in "Come From Away." 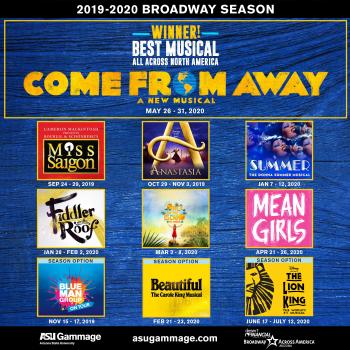 “We have some big Tempe premieres headed our way next season that you do not want to miss,” said Colleen Jennings-Roggensack, executive director of ASU Gammage and ASU vice president for cultural affairs. "Broadway is booming around the world and right here at ASU Gammage. We’re connecting the community to live theater experiences many will never forget.”

The best way to guarantee tickets to the best of Broadway is to purchase a season subscription.

Subscriptions start at $195 for seven shows and are available at asugammage.com.

Experience the acclaimed new production of the legendary musical "Miss Saigon," from the creators of "Les Misérables." This is the story of a young Vietnamese woman named Kim who is orphaned by war and forced to work in a bar run by a notorious character known as the Engineer. There she meets and falls in love with an American GI named Chris, but they are torn apart by the fall of Saigon. For three years, Kim goes on an epic journey of survival to find her way back to Chris, who has no idea he's fathered a son. Featuring stunning spectacle and a sensational cast of 42 performing the soaring score, including Broadway hits like “The Heat is On in Saigon,” “The Movie in My Mind,” “Last Night of the World” and “American Dream,” this is a theatrical event you will never forget.

Inspired by the beloved film, the romantic and adventure-filled new musical "Anastasia" is on a journey to ASU Gammage at last! From the Tony Award-winning creators of the Broadway classic "Ragtime," this dazzling show transports us from the twilight of the Russian Empire to the euphoria of Paris in the 1920s, as a brave young woman sets out to discover the mystery of her past. Pursued by a ruthless Soviet officer determined to silence her, Anya enlists the aid of a dashing conman and a lovable ex-aristocrat. Together, they embark on an epic adventure to help her find home, love and family. "Anastasia" features a book by celebrated playwright Terrence McNally, a lush new score by Stephen Flaherty (music) and Lynn Ahrens (lyrics) with direction by Tony Award-winner Darko Tresnjak.

She was a girl from Boston with a voice from heaven, who shot through the stars from gospel choir to dance floor diva. But what the world didn’t know was how Donna Summer risked it all to break through barriers, becoming the icon of an era and the inspiration for every music diva who followed. With a score featuring more than 20 of Summer’s classic hits including “Love to Love You Baby,” “Bad Girls” and “Hot Stuff,” this electric experience is a moving tribute to the voice of a generation.

Tony Award-winning director Bartlett Sher and the team behind "South Pacific," "The King and I," and 2017 Tony-winning Best Play "Oslo,' bring a fresh and authentic vision to this beloved theatrical masterpiece from Tony-winner Joseph Stein and Pulitzer Prize winners Jerry Bock and Sheldon Harnick. The original production won 10 Tony Awards, including a special Tony for becoming the longest-running Broadway musical of all time. You’ll be there when the sun rises on this new production, with stunning movement and dance from acclaimed Israeli choreographer Hofesh Shechter, based on the original staging by Jerome Robbins. A wonderful cast and a lavish orchestra tell this heartwarming story of fathers and daughters, husbands and wives, and the timeless traditions that define faith and family. Featuring the Broadway classics “Tradition,” “If I Were a Rich Man,” “Sunrise, Sunset,” “Matchmaker, Matchmaker” and “To Life,” "Fiddler on the Roof" will introduce a new generation to this uplifting celebration that raises its cup to joy! To love! To life!

“What a delight it is to enter the world of "Once on This Island!" raves The New York Times. Winner of the 2018 Tony Award for Best Revival of a Musical, "Once on This Island" is the sweeping, universal tale of Ti Moune, a fearless peasant girl in search of her place in the world, ready to risk it all for love. Guided by the mighty island gods, Ti Moune sets out on a remarkable journey to reunite with the man who has captured her heart. The groundbreaking vision of two-time Tony Award-nominated director Michael Arden ("Spring Awakening" revival) and acclaimed choreographer Camille A. Brown (NBC’s "Jesus Christ Superstar Live") conjures up “a place where magic is possible and beauty is apparent for all to see!” (The Huffington Post). With a score that bursts with life from Lynn Ahrens and Stephen Flaherty, the Tony Award-winning songwriters of "Anastasia" and "Ragtime," "Once on This Island" is a timeless testament to theater’s unlimited possibilities.

Direct from Broadway, "Mean Girls" is the hilarious hit musical from an award-winning creative team, including book writer Tina Fey (“30 Rock”), composer Jeff Richmond (“Unbreakable Kimmy Schmidt”), lyricist Nell Benjamin ("Legally Blonde") and director Casey Nicholaw ("The Book of Mormon"). Cady Heron may have grown up on an African savanna, but nothing prepared her for the vicious ways of her strange new home: suburban Illinois. Soon, this naïve newbie falls prey to a trio of lionized frenemies led by the charming but ruthless Regina George. But when Cady devises a plan to end Regina’s reign, she learns the hard way that you can’t cross a Queen Bee without getting stung.

Broadway’s "Come From Away" is a Best Musical winner all across North America. This New York Times critics’ pick takes you into the heart of the remarkable true story of 7,000 stranded passengers and the small town in Newfoundland that welcomed them. Cultures clashed and nerves ran high, but uneasiness turned into trust, music soared into the night, and gratitude grew into enduring friendships. Don’t miss this breathtaking new musical written by Tony Award-nominees Irene Sankoff and David Hein, and helmed by this year’s Tony-winning best director, Christopher Ashley. Newsweek cheers, “It takes you to a place you never want to leave!” On 9/11, the world stopped. On 9/12, their stories moved us all.

"Beautiful – The Carole King Musical" tells the inspiring true story of King’s remarkable rise to stardom, from being part of a hit songwriting team with her husband Gerry Goffin, to her relationship with fellow writers and best friends Cynthia Weil and Barry Mann, to becoming one of the most successful solo acts in popular music history. Along the way, she made more than beautiful music, she wrote the soundtrack to a generation. Featuring a stunning array of beloved songs written by Gerry Goffin/Carole King and Barry Mann/Cynthia Weil, including “I Feel The Earth Move,” “One Fine Day,” “(You Make Me Feel Like) A Natural Woman,” “You’ve Got A Friend” and the title song, "Beautiful," has a book by Tony Award-nominee and Academy Award-nominated writer Douglas McGrath, direction by Marc Bruni, choreography by Josh Prince, and took home two 2014 Tony Awards and a 2015 Grammy Award.

Giraffes strut. Birds swoop. Gazelles leap. The entire Serengeti comes to life as never before. And as the music soars, Pride Rock slowly emerges from the mist. This is Disney’s "The Lion King," making its triumphant return to ASU Gammage! More than 85 million people around the world have experienced the awe-inspiring visual artistry, the unforgettable music, and the uniquely theatrical storytelling of this Broadway spectacular — one of the most breathtaking and beloved productions ever to grace the stage. Winner of six Tony Awards, including Best Musical, "The Lion King" brings together one of the most imaginative creative teams on Broadway. Tony Award-winning director Julie Taymor brings to life a story filled with hope and adventure set against an amazing backdrop of stunning visuals. "The Lion King" also features the extraordinary work of Tony Award-winning choreographer Garth Fagan and some of Broadway’s most recognizable music, crafted by Tony Award-winning artists Elton John and Tim Rice. There is simply nothing else like "The Lion King."

Catching Lightning in a Bottle

Catching Lightning in a Bottle