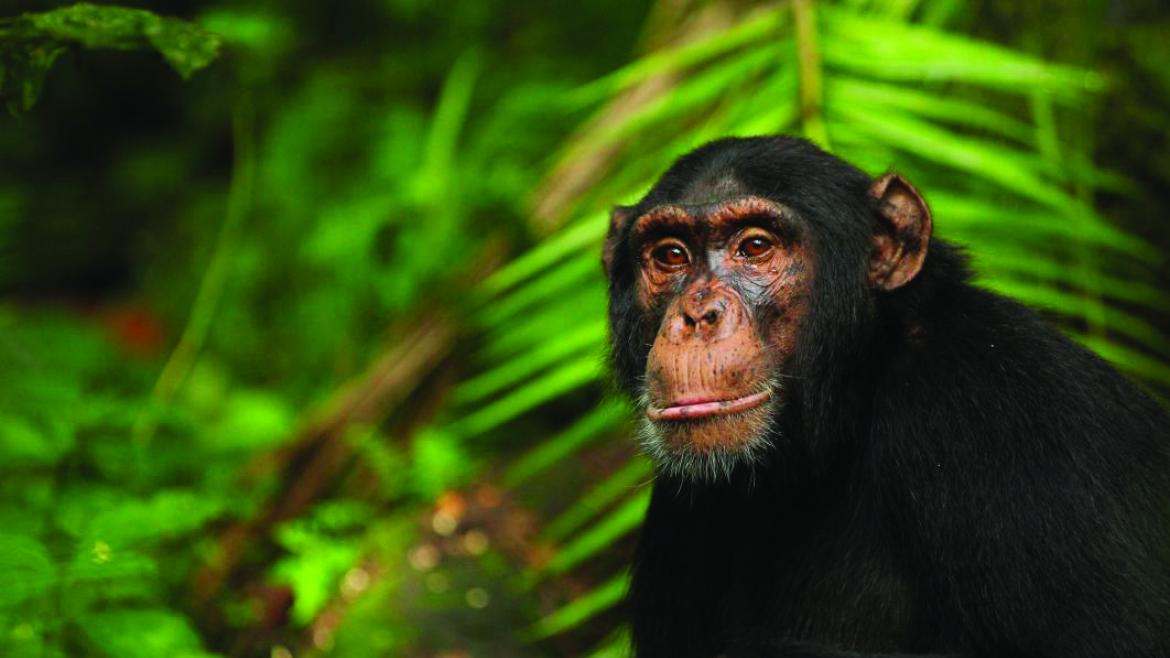 Compared with other animals, chimpanzees show tremendous variation across groups in their behavior — from the types of tools they use in their feeding behavior to the specific gestures they use in communication. Research in captivity suggests that chimpanzees acquire information socially, learning to do things in a certain way based on how it is done by other members of their group. Thus, much of the variation in the behavior among wild chimpanzee groups may be akin to “cultural” variation in humans.

As part of an international team led by researchers at the Max Planck Institute for Evolutionary Anthropology and the German Centre for Integrative Biodiversity Research, ASU researchers Kevin Langergraber and Kevin Lee were co-authors in a study published this week in the journal Science, examining the relationship between human impact and behavioral diversity in chimpanzees. Langergraber is a research affiliate with the Institute of Human Origins and an associate professor in the School of Human Evolution and Social Change. Lee is a graduate student working with Langergraber on his doctoral research.

Unfortunately, chimpanzee populations are declining across their range in equatorial Africa due to deforestation, hunting and diseases, many of which originate in humans. Much of the empirical work and debate surrounding the loss of biodiversity has focused on declines in genetic diversity or population size.

However, behavioral diversity is also a facet of biodiversity, but it has not been considered as an additional concern until recently. Several international conservation organizations, such as the Convention on Biological Diversity or the Convention on the Conservation of Migratory Species of Wild Animals, of the United Nations Environment Programme, now call for the protection of biological diversity in its entirety, including behavioral diversity of culturally rich wildlife.

Due to limited empirical data, until now it had been unclear whether behavioral diversity would similarly be negatively affected by human impact.

“Chimpanzees are highly intelligent and adaptable creatures,” Lee said, “and there have been various reports of chimpanzees, both in captivity and in free-living conditions, that have relatively more frequent contact with humans exhibiting some ‘novel’ behaviors not observed in more remote populations, but it was not clear how overall behavioral diversity would be affected.”

The international research team compiled an unprecedented data set on 31 chimpanzee behaviors across 144 social groups or communities, located throughout the entire geographic range of wild chimpanzees. Though part of this information was already available in the scientific literature, the team also conducted extensive fieldwork at 46 locations, including on a group near Langergraber’s long-term research site in Kibale National Park, Uganda, while Lee led a separate team in Bwindi Impenetrable National Park, Uganda.

The particular set of behaviors considered in this study included the extraction and consumption of termites, ants, algae, nuts and honey; the use of tools for hunting or digging for tubers; and the use of stones, pools and caves.

The occurrence of behaviors at a given site was investigated with respect to an aggregate measure of human impact.

“We measured multiple levels of human impact, including human population density, roads, rivers and forest cover,” Langergraber said. “The analysis revealed a strong and robust pattern — chimpanzee behavioral diversity was reduced by 88 percent when human impact was highest compared to locations with the least human impact.”

There are a number of potential mechanisms that may explain the loss of behaviors observed. As is known for humans, population size plays a major role in maintaining cultural traits and a similar mechanism may function in chimpanzees. Chimpanzees may also avoid conspicuous behaviors that inform hunters about their presence, such as nut cracking.

Habitat degradation and resource depletion may also reduce opportunities for social learning and thus prevent the transfer of local traditions from one generation to the next. Lastly, climate change may also be important, as it may influence the production of important food resources and make their availability unpredictable. Very likely a combination of these potential mechanisms has caused the observed reduction in chimpanzee behavioral diversity.

When male chimpanzees of the world’s largest known troop patrol the boundaries of their territory in Ngogo, Uganda, they walk silently in single file.Normally chimps are noisy creatures, but on patrol they’re hard-wired. They sniff the ground and stop to listen for sounds. Their cortisol and testosterone levels are jacked 25 percent higher than normal. Chances of contacting neighboring enemies... 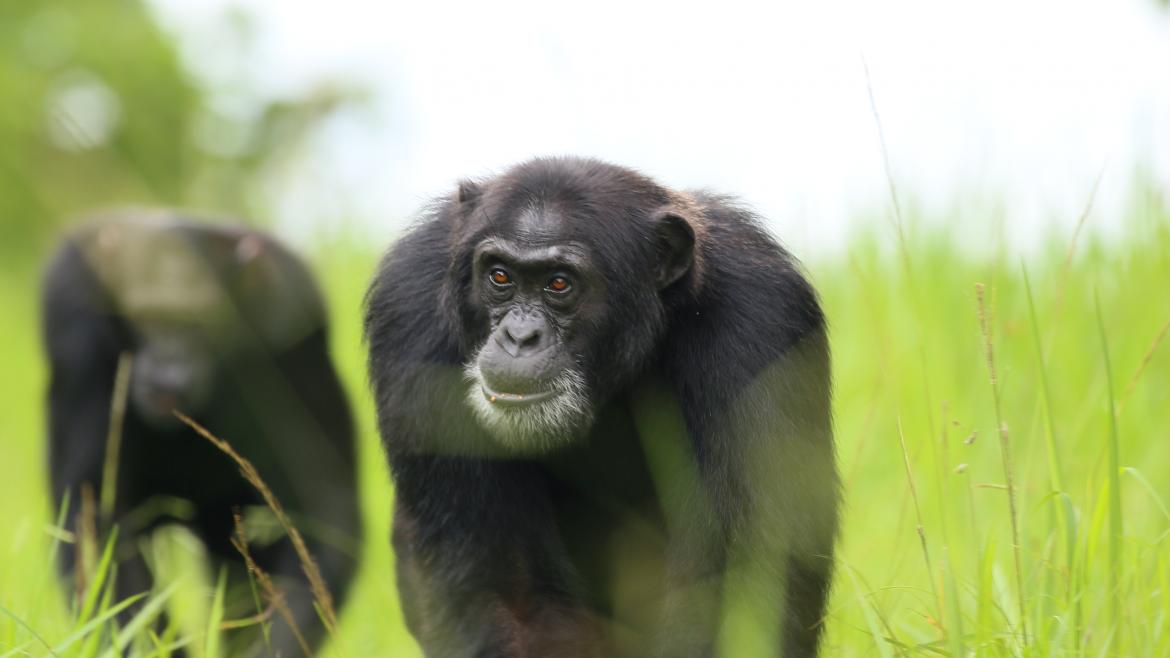 When male chimpanzees of the world’s largest known troop patrol the boundaries of their territory in Ngogo, Uganda, they walk silently in single file.

Normally chimps are noisy creatures, but on patrol they’re hard-wired. They sniff the ground and stop to listen for sounds. Their cortisol and testosterone levels are jacked 25 percent higher than normal. Chances of contacting neighboring enemies are high: 30 percent.

Ten percent of patrols result in violent fights where they hold victims down and bite, hit, kick and stomp them to death. The result? A large, safe territory rich with food, longer lives, and new females brought into the group.

Territorial boundary patrolling by chimpanzees is one of the most dramatic forms of collective action in mammals. A new study led by an Arizona State University researcher shows how working together benefits the group, regardless of whether individual chimps patrolled or not.

The team — led by Assistant Professor Kevin Langergraber of ASU’s School of Human Evolution and Social Change and the Institute of Human Origins — examined 20 years of data on who participated in patrols in a 200-member-strong Ngogo community of chimpanzees in Kibale National Park, Uganda. The study was recently published in the Proceedings of the National Academy of Sciences.

Despite plenty of opportunities to skip dangerous patrols, males joined 33 percent of patrols that occurred when they were in the group and young enough to take part, even if they weren’t related.

The behavior is evidence of what’s called group augmentation theory. What is good for the group is ultimately good for the individual. Some sacrifice from each member translates into a larger, safer group. By 2009, the Ngogo chimpanzees expanded their territory by 22 percent over the previous decade.

“Free riders may increase their short-term reproductive success by avoiding the costs of collective action,” Langergraber’s team wrote, “but they do so at the cost of decreasing the long-term survival of the group if it fails to grow or maintain its size; nonparticipants suffer this cost alongside the individuals they had cheated.” In short, if a member of the group doesn’t pitch in, they’re ultimately hurting themselves.

Chimpanzees are one of the few mammals in which inter-group warfare is a major source of mortality. Chimps in large groups have been reported to kill most or all of the males in smaller groups over periods of months or years, acquiring territory in the process. Territorial expansion can lead to the acquisition of females who bear multiple infants. It also increases the amount of food available to females in the winning group, increasing their fertility. The researchers found no consequences for those chimpanzees that did not join patrols. Most studies have focused on short term benefits of cooperation, said lead researcher Kevin Langergraber, “but our study shows the benefit of long-term data collection, and also that we still have a lot to learn from these chimpanzees.” Photo courtesy of Kevin Langergraber

Male chimpanzees are homebodies and remain in the group they were born in their entire lives. Because they can live for more than 50 years, patrolling when they’re young produces future benefits.

However, if they don’t patrol, there aren’t any consequences — no sidelong glances, snubs or being chased out of the group, said anthropologist David Watts of Yale University, who worked with Langergraber on the study.

“We know from a lot of theoretical and empirical work in humans and in some other specialized, highly cooperative societies — like eusocial insects — that punishment by third parties can help cooperation evolve,” Watts said. “But it doesn’t seem to us that chimpanzees punish individuals who do not patrol. Sometimes individuals will be present when a patrol starts, and thus have the opportunity to join the patrol but fail to do so. As far as we can see, these individuals do not receive any sort of punishment when this occurs.”

Chimpanzees are highly intelligent, but they aren’t capable of what’s called “collective intentionality,” which allows humans to have mutual understanding and agreement on social conventions and norms.

“They undoubtedly have expectations about how others will behave and, presumably, about how they should behave in particular circumstances, but these expectations presumably are on an individual basis,” Watts said. “They don’t have collectively established and agreed-on social norms.”

Humans can join together in thousands to send men into space or fight global wars or build skyscrapers. Chimpanzees don’t have anywhere near that level of cooperation.

“But this tendency of humans to cooperate in large groups and with unrelated individuals must have started somewhere,” Watts said. “The Ngogo group is very large (about 200 individuals), and the males in it are only slightly more related to one another than to the males in the groups with which they are competing.

“Perhaps the mechanisms that allow collective action in such circumstances among chimpanzees served as building blocks for the subsequent evolution of even more sophisticated mechanisms later in human evolution.”