What do tiny specks of silicon carbide stardust, found in meteorites and older than the solar system, have in common with pairs of aging stars prone to eruptions?

A collaboration between two Arizona State University scientists — cosmochemist Maitrayee Bose and astrophysicist Sumner Starrfield, both of the School of Earth and Space Exploration — has uncovered the connection and pinpointed the kind of stellar outburst that produced the stardust grains.

Their study has just been published in the Astrophysical Journal.

The microscopic grains of silicon carbide — a thousand times smaller than the average width of a human hair — were part of the construction materials that built the sun and planetary system. Born in nova outbursts, which are repeated cataclysmic eruptions by certain types of white dwarf stars, the silicon carbide grains are found today embedded in primitive meteorites.

"Silicon carbide is one of the most resistant bits found in meteorites," Bose said. "Unlike other elements, these stardust grains have survived unchanged from before the solar system was born."

Although powerful, the eruption doesn't destroy the white dwarf or its companion, so novae can erupt over and over, repeatedly throwing into space gas and dust grains made in the explosion. From there the dust grains merge with clouds of interstellar gas to become the ingredients of new star systems.

The sun and solar system were born about 4.6 billion years ago from just such an interstellar cloud, seeded with dust grains from earlier stellar eruptions by many different kinds of stars. Almost all the original grains were consumed in making the sun and planets, yet a tiny fraction remained. Today these bits of stardust, or presolar grains, can be identified in primitive solar system materials such as chondritic meteorites.

Silicon carbide grains are among the most durable bits that can be extracted from a meteorite; these are four taken from the Murchison meteorite. The width of an average human hair is about thousand times larger than the 100 nm scale bar. 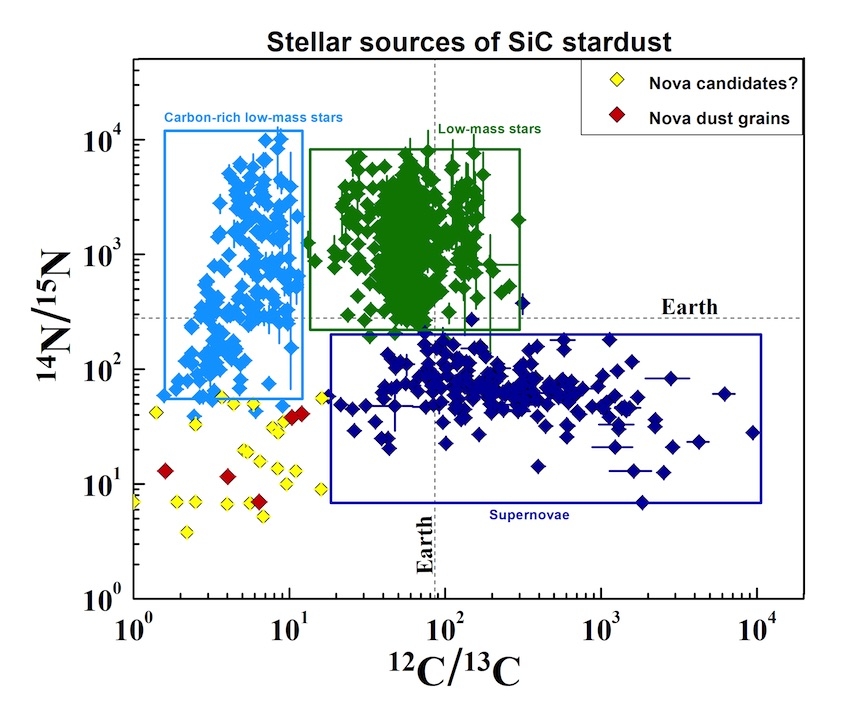 Plotting the carbon and nitrogen isotopes in stardust grains places them in distinct groups, based on their origins. The nova candidate grains lie at lower left in yellow, with the proven nova grains in red. The dotted line marks where Earth's average isotopic composition lies. 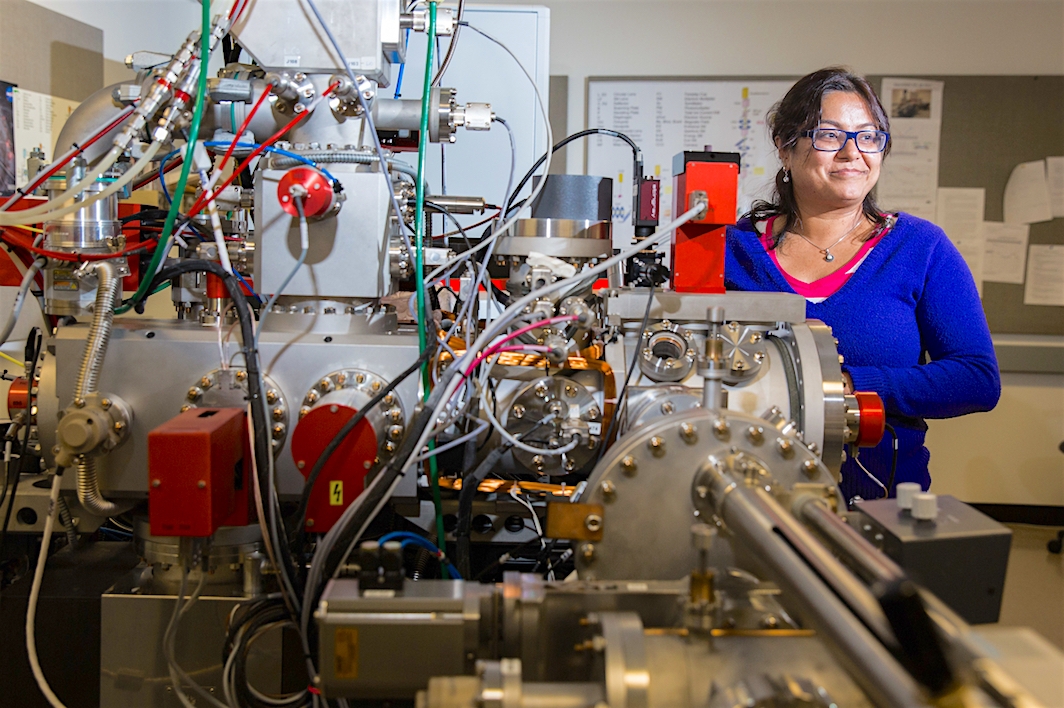 "The key that unlocked this for us was the isotopic composition of the stardust grains," Bose said. Isotopes are varieties of chemical elements that have extra neutrons in their nuclei. "Isotopic analysis lets us trace the raw materials that came together to form the solar system."

She added, "Each silicon carbide grain carries a signature of the isotopic composition of its parent star. This provides a probe of that star's nucleosynthesis — how it made elements."

Bose collected published data on thousands of grains, and found that nearly all the grains grouped naturally into three main categories, each attributable to one kind of star or another.

But there were about 30 grains that couldn't be traced back to a particular stellar origin. In the original analyses, these grains were flagged as possibly originating in nova explosions.

As a theoretical astrophysicist, Starrfield uses computer calculations and simulations to study various kinds of stellar explosions. These include novae, recurrent novae, X-ray bursts and supernovae.

Working with other astrophysicists, he was developing a computer model to explain the ejected materials seen in the spectrum of a nova discovered in 2015. Then he attended a colloquium talk given by Bose before she had joined the faculty.

"I would not have pursued this if I hadn't heard Maitrayee’s talk and then had our follow-up discussion," he said. That drew him deeper into the details of nova eruptions in general and what presolar grains could say about these explosions that threw them into space.

A problem soon arose. "After talking with her," Starrfield said, "I discovered our initial way of solving the problem was not agreeing with either the astronomical observations or her results.

"So I had to figure out a way to get around this."

He turned to multidimensional studies of classical nova explosions and put together a wholly new way of doing the model calculations.

There are two major composition classes of nova, Starrfield said. "One is the oxygen-neon class which I've been working on for 20 years. The other is the carbon-oxygen class which I had not devoted as much attention to." The class designations for novae come from the elements seen in their spectra.

"The carbon-oxygen kind produce a lot of dust as part of the explosion itself," Starrfield said. "The idea is that the nova explosion reaches down into the white dwarf's carbon-oxygen core, bringing up all these enhanced and enriched elements into a region with high temperatures."

That, he said, can drive a much bigger explosion, adding, "It's really messy. It shoots out dust in tendrils, sheets, jets, blobs and clumps."

Starrfield's calculations made predictions of 35 isotopes, including those of carbon, nitrogen, silicon, sulfur and aluminum, that would be created by the carbon-oxygen nova outbursts.

It turned out that getting the right proportion of white dwarf core material and accreted material from the companion star was absolutely necessary for the simulations to work. Bose and Starrfield then compared the predictions with the published compositions of the silicon carbide grains.

This led them to a somewhat surprising conclusion. Said Bose, "We found that only five of the roughly 30 grains could have come from novae."

While this may seem a disappointing result, the scientists were actually pleased. Bose said, "Now we have to explain the compositions of the grains that didn't come from nova outbursts. This means there's a completely new stellar source or sources to be discovered."

Then looking at the larger picture, she added, "We have also found that astronomical observations, computer simulations and high-precision laboratory measurements of stardust grains are all needed if we want to understand how stars evolve. And this is exactly the kind of interdisciplinary science that the school excels at.”

Top photo: Stars that erupt in nova explosions are binary pairs of stars that consist of a compact, hot white dwarf (left) and a cool, extended giant star. The giant sheds hydrogen gas that is pulled into the white dwarf, where it accumulates until a thermonuclear explosion happens. The recurring explosions throw out dust and processed elements into space where they can become part of entirely new stars. This illustration shows RS Ophiuchi, a nova that erupts about every 20 years. Image copyright David A. Hardy/www.astroart.org, used with permission

When is a nova not a ‘nova’? When a white dwarf and a brown dwarf collide