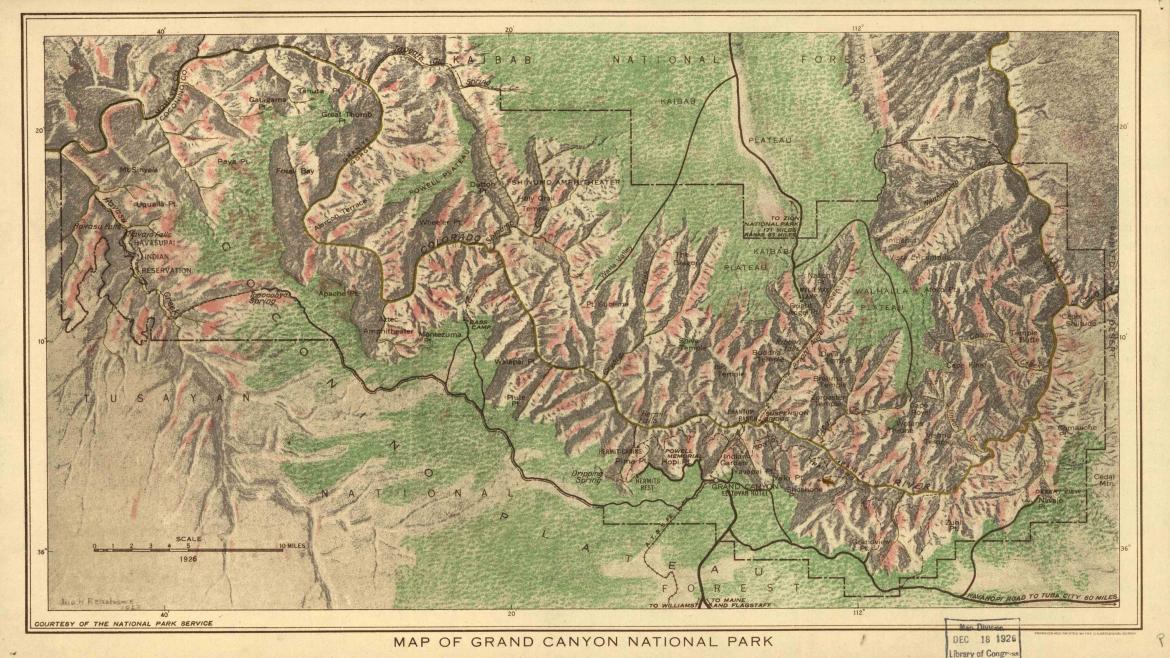 In honor of the canyon's centennial as a national park, ASU Now looks at the landmark's past and future

The Grand Canyon National Park turns 100 on Feb. 26, but the canyon's history goes back far beyond that.

Its history is layered with discovery, reverence and adventure. It is where we journey to find ourselves, to lose ourselves, to pick up a new trail and continue onward.

The history of the Grand Canyon is tied into the history of our state and its peoples, both ancient and newly arrived. To honor the park's centennial, ASU Now has gathered some of those stories — stories of play, stories of loss, stories of exploration and protecting what is there.

Come to the edge and see. Let us take a fresh look at an ancient wonder.

Stories of the Grand Canyon

Literally and figuratively, the Grand Canyon is Arizona’s biggest attraction. Naturally, it draws the attention of artists, faculty and scientists from Arizona State University, the state’s biggest university. From a university president who took an unexpected plunge to a photographer who travels through time, here are their stories.

The future of visiting the canyon

Grand Canyon National Park draws visitors from all over the world to bask in its beauty, making it not only a precious ecological resource to cherish but also a major economic driver for the state of Arizona. Balancing the twin missions of access and preservation is key to its future, according to experts at ASU.

Verses inspired by the vistas

Perhaps the most stunning of natural wonders is the Grand Canyon. ASU Now asked some of the university’s most dynamic wordsmiths to wax poetic about the famous landmark — hear them read their new works.

Without maps, we would not be able to see the Grand Canyon. Only a bird could see the immense gash in the Earth’s crust, almost 300 miles long. At the end of February, ASU will host the first conference exploring the art, science and practice of Grand Canyon cartography.

Native Americans view the Grand Canyon through myriad lenses: As a land tied to their place of origin. As a place to be both feared and revered. As a place of opportunity. As an inspiration for cultural expression. And they view it territorially among themselves. All these elements run as deep and as wide as the canyon.

Love and loss in the canyon

This is a story about three people, passion, a place, and triumphing over tragedy. Three passionate backpackers and the Grand Canyon, the place which united them, and separated them. And then elevated them.

Ooh and awe: The science behind our fascination with nature

If you gasped the first time you saw the canyon in person, you aren't alone; many visitors are awestruck. Associate Professor of social psychology Lani Shiota is an expert on the emotion of awe. She's working to uncover the secrets of the emotion, and she has made some interesting discoveries.

A light dusting of Grand history

In river lingo, what's a yard sale? What famous people have rafted through the canyon? What role did the Colorado River play in Barry Goldwater's political career? Find out in our sampler of history and trivia.

FEATURED IN 'THE CONVERSATION': How a place once called 'valueless' became grand

WATCH: 'Beyond the Rim: The Next 100 Years of Grand Canyon National Park,' a documentary from AZPBS

Editor's note: This story is part of an ASU Now series celebrating the centennial of the Grand Canyon National Park. Without maps, we would not be able to see the Grand Canyon. Only a bird could see the immense gash in the Earth’s crust, almost 300 miles long. Maps allow us to see the whole thing at once or particular aspects like the geology, points of interest and river rapids. At the end o... 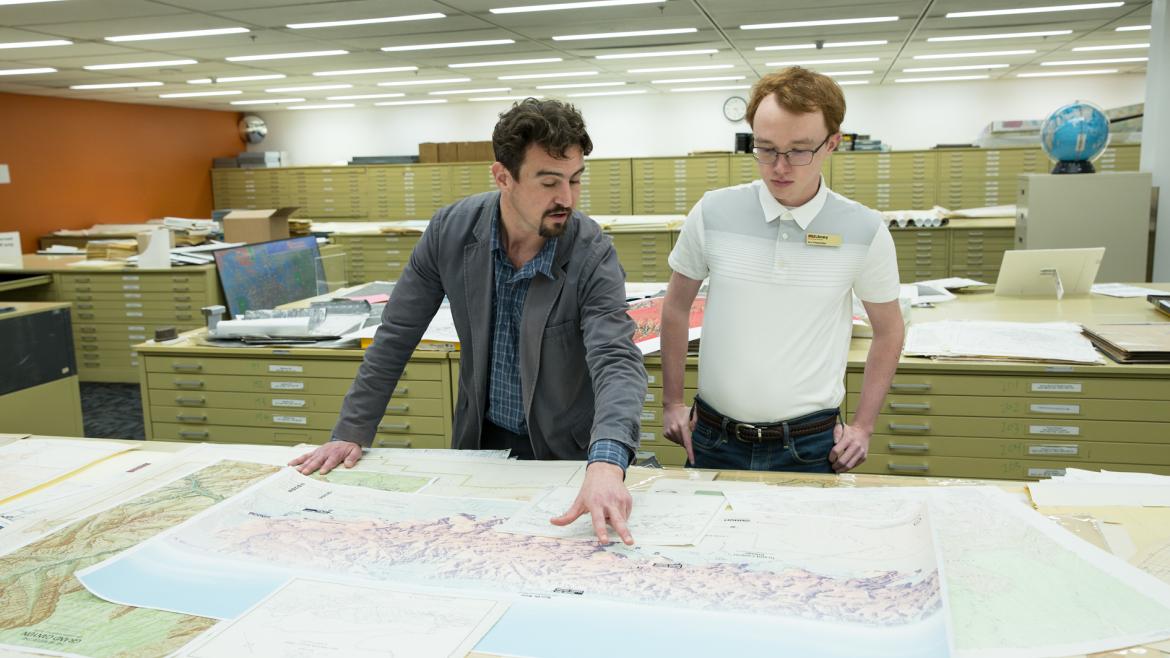 ASU hosts first conference on cartography of the natural wonder

Editor's note: This story is part of an ASU Now series celebrating the centennial of the Grand Canyon National Park.

Without maps, we would not be able to see the Grand Canyon.

Only a bird could see the immense gash in the Earth’s crust, almost 300 miles long. Maps allow us to see the whole thing at once or particular aspects like the geology, points of interest and river rapids.

At the end of February, Arizona State University will host the first conference exploring the art, science and practice of Grand Canyon cartography.

ASU’s collection of 240 Grand Canyon maps includes an 1852 military map, where the Colorado Plateau is mostly blank, and a Spanish colonial map with the same blank spaces. A territorial map from 1880 shows the now-drowned Glen Canyon. There are aeronautical charts showing no-fly zones below 14,000 feet, cartoon maps with female tourists swooning over lanky cowboys, and the gas station maps people of a certain age will remember. Some maps capture lost landscapes, like rapids long overtaken by Lake Mead. Some are digitized copies, and some are originals.

Matthew Toro is the director of maps, imagery and geospatial services at the ASU Library Map and Geospatial Hub. He leads projects and programming at the center for GIS, remote sensing and related technologies. The idea for a conference came to him when he was in the canyon on a rim-to-rim hike.

Toro did some research and found out no one had ever hosted a conference on mapping the canyon.

“Believe it or not, no one’s ever looked into that angle of Grand Canyon history: How the Grand Canyon was mapped,” he said. “And it was a surprise to me. This is one of the most iconic landscapes on the face of the Earth, not only for North America, for the United States, or Arizona. ... I realize the notion of thinking of the Grand Canyon as a whole is very much an abstraction. When you think how we know the Grand Canyon, most of our knowledge of the canyon is through maps. ... I realized there’s a fascinating history here and no one’s really looked at it holistically.”

Among other projects, Toro is currently constructing a cartographic history of the greater Grand Canyon region. When he started work at the university, he found a set of maps in a back room that belonged to a famous cartographer, mountaineer and photographer named Bradford Washburn.

Comments on cartography websites: “If only all maps were made to this standard.” “It’s the epitome of dedication and commitment to the craft of making a map.”

The achievement is mentioned in the first paragraph of Washburn’s obituary in the New York Times.

Ansel Adams called Washburn one of the best mountain photographers of all time. Washburn shot from unpressurized planes and helicopters, with doors removed, at temperatures far below zero, while tethered to the cabin. He made landmark climbs in Alaska and Europe, employing the unprecedented use of glacier landings and supply drops. In 1939, he took a job as director of the New England Museum of Natural History (later to be called the Museum of Science) in Boston, transforming an old, rundown joint into the greatest children’s museum in the world. In 1992 he was a member of the survey team that made the first laser measurement on top of Mount Everest, discovering the mountain was 7 feet higher than previously thought.

In the early 1970s, Washburn visited the Grand Canyon and decided there wasn’t a good enough map of it. There were U.S. Geological Survey maps, but they weren’t up to the latest standards.

“He felt they were inadequate,” said Michael Fry, the collection manager and senior map librarian at the National Geographic Society's Library and Archives since 2010. “It wasn’t useful enough for casual users like hikers and it wasn’t good enough for scientific use, so whether you were looking at the canyon for geologic or archaeological purposes, it just wasn’t something good enough for anybody. He seemed to be the sort of person when he saw a need, he wanted to fill it, and this was right up his alley.”

Washburn approached the National Geographic Society and asked the Committee for Research and Exploration for a grant to do the cartography. They were familiar with him and his work.

“The internal response here was, ‘That’s a good idea. It’s one of the most remarkable natural features on Earth. It would be right up our alley. We need to support that,’” Fry said.  “And we gave him money.”

Washburn and his hand-picked team spent four and a half years on the project, with 144 days in the field. They made 712 helicopter landings to survey lines. Washburn called it mapping “a mountain upside down.” 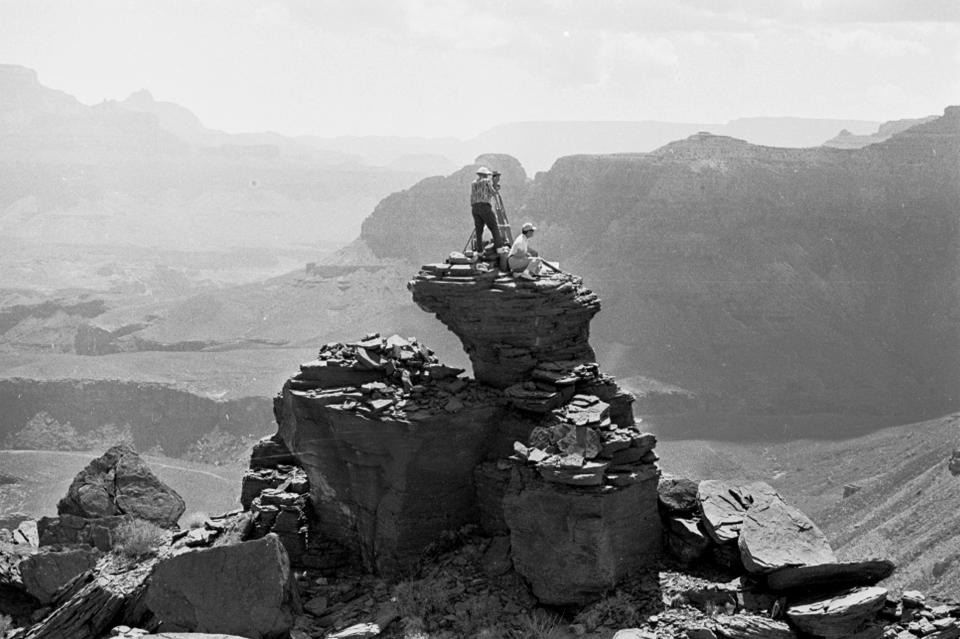 Bradford Washburn and his wife perched on Dana Butte, one of the reference points used in measuring and mapping the Grand Canyon, in June 1972. Photo by Gary Settle/The New York Times

GPS didn’t exist back then. Washburn used a theodolite, a laser instrument for measuring angles, elevations and distances; aerial photos; a helicopter; and his feet.

“It was a huge, huge effort,” Fry said. “He was just a dedicated, driven guy, just tenacious and skilled and had lots of experience. ... What’s remarkable about it is how much dedication and expertise went into the surveying of the canyon, the production of the cartography, the artwork that is the basis for the map.”

The map’s scale is at 1:24,000, just over 2.5 inches to the mile. At that scale, Washburn represented the canyon in a way never before seen. He and his wife received the Alexander Graham Bell Medal for “unique and notable contributions to geography and cartography.” Fry will give a presentation on the map at the conference.

“I cannot overstate the caliber of the speakers we have put together,” Toro said.

One of the most famous maps of Grand Canyon is Harvey Butchart’s personal map, which hangs in the park’s backcountry office. Butchart was a Flagstaff math professor who hiked more of the canyon than anyone else in history, logging more than 12,000 miles and becoming the first to hike the length of the park. Peter Runge, head of special collections at Northern Arizona University, will be doing a presentation on Butchart’s map. “We have a dedicated presentation just on that,” Toro said.

Famed geologist Karl Karlstrom will give an overview of geologic mapping in the canyon.

“We have gathered rock stars from the worlds of geology, history and cartography,” Toro said. “We have Tom Patterson, who is the recently retired senior cartographer for the National Park Service. When you go to the Grand Canyon and you get your National Park maps, all those maps were made by one of our keynote speakers. … We’re going to be celebrating the centennial, the sesquicentennial, and the very ancient act of mapping.” The event is free and open to the public.

“A lot of this is fascinating history,” Toro said. “I think (the public) would get a real kick learning some of these stories, learning about how maps are made. Everyone takes maps for granted these days. ... No one thinks about where all that data comes from. That data helps inform our consciousness of the world and space and this giant hole in the ground carved over millions of years. ... One need not be a geographer or historian or geologist to love the Grand Canyon, and to love maps and to love history. It’s really the convergence of those various themes that we want to host this conference for.”

Those who can’t make it to the conference can watch it live. A recording will also be available at the ASU Library YouTube channel.