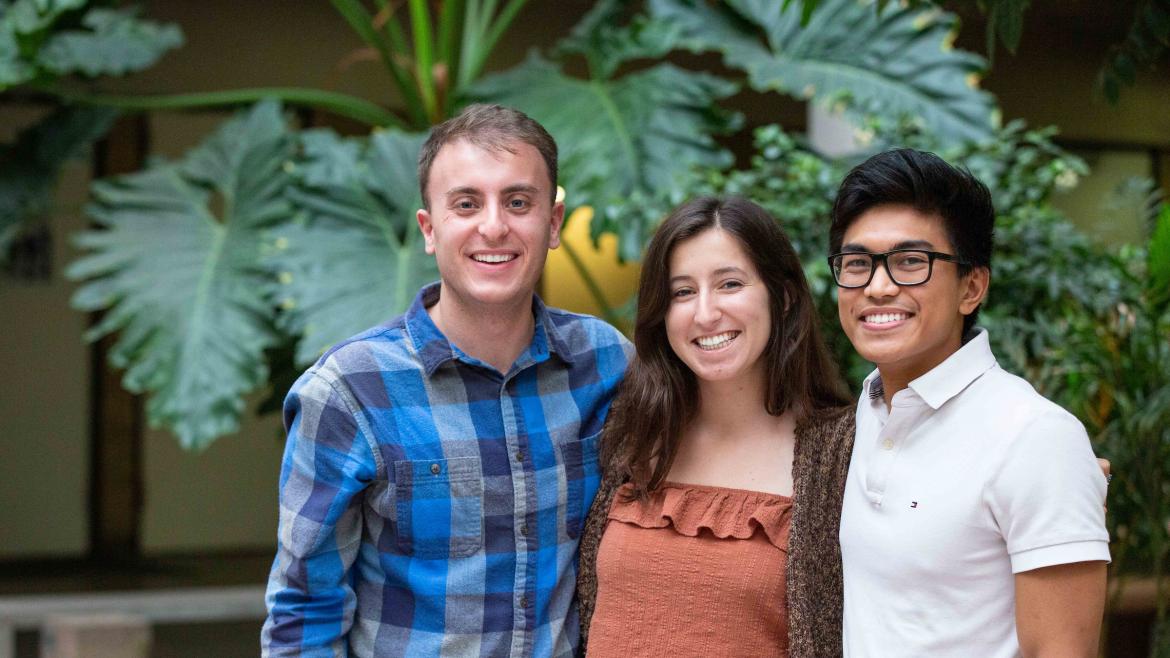 Tucked away somewhere, in the annals of many a university’s research archives, are the theses of the students of yesteryear. Grand ideas, curious inquiries and profound realizations — true products of blood, sweat and tears — collecting dust.

Not so at ASU.

The honors thesis being developed by a group of interdisciplinary Barrett, The Honors College students, detailing the socioeconomic effects of the introduction of solar technology to rural communities in Belize, is already having real-world impact.

Later this month, Ivan Bascon, Olivia Gonzalez and Grant Laufer will present their initial findings at the Human Development Conference in Indiana, and they’ve also invited a representative from the organization that supplied the solar technology to sit in when they defend their thesis this spring.

“Now there's a possibility of them actually implementing positive changes based on the research that we did as opposed to just letting it sit in the Barrett repository forever,” said Gonzalez, a global health senior.

The idea for their thesis came about after participating in The Global Intensive Experience, a unique study abroad program sponsored by the School of Civic and Economic Thought and Leadership designed to expose students to liberal democracy in different contexts around the world.

Currently, GIE offers programs in north India, Israel and the West Bank, with another in development in South Africa.

Bascon, a molecular biosciences and biotechnology senior; Laufer, an economics and business senior; and Gonzalez participated in the spring 2018 program in India, where they witnessed the work being done at Barefoot College, a volunteer organization founded in 1986 that trains poor, rural women — called Solar Mamas — from all over the world to become entrepreneurs and produce solar-energy technology to take back to their communities.

What they saw blew them away.

“It almost just seemed too amazing to be true,” Laufer said. “Just all these foreign people coming together, different languages, different backgrounds, and they're all learning to be solar engineers. You can't walk away from that without wanting to know more.”

As individuals who share an interest in international development, they were also impressed with the nonprofit’s focus on sustainable empowerment.

So the trio hatched a plan to travel to one of the rural communities in Belize where Solar Mamas had brought solar technology and see for themselves how it affected the community.

For 17 days over winter break, they observed and interviewed the residents of Santa Elena, where solar technology had recently been introduced, and Jalacte, another rural village that did not have electricity.

Despite a couple of hiccups at the beginning of the trip (trouble finding their contact upon arrival and a brief bout of illness), the students found they were able to ease into a good workflow, thanks in large part to the warmth and hospitality of the communities.

For the most part, they spent nights at a hostel in Punta Gorda, a fishing town on the Caribbean coast of southern Belize, and took a bus each day to the rural villages. But one night, the councilman of Santa Elena — whose wife is a Solar Mama — invited them to stay overnight at his home.

“We got to — in a brief little way — live a little Mayan life,” Bascon said. That night, they ate a traditional meal and slept in a hammock.

“Everyone was so accommodating and excited to talk to us,” Laufer added.

Susan Carrese, the group’s thesis director and GIE facilitator, said the program is not only a great way for students to learn what “leadership” and “service” mean in another culture, but a great way to stimulate future research.

“As part of our first GIE cohort in March 2018, Olivia, Grant and Ivan were forced to assess their own skill sets, seek help from others, reflect on failures and dig deep into who they are and who they want to be on the GIE,” she said. “When they came back to Barrett Honors College, they were primed for an ambitious project.”

Since returning from Belize, the group has been analyzing mountains of notes and hours of interviews. It’ll be some time before they have anything conclusive to report, but they have been able to make some preliminary assessments of the data and have found both health and economic benefits to having solar energy.

Health-wise, solar technology eliminates the need for kerosene lamps and the harmful fumes that accompany them. Economically, the more efficient lighting allows women to stay up later making crafts and jewelry, a major source of income for the village.

While the group is eager to see the immediate impact of their research on the communities involved, they’re also cognizant of the lasting effects it will have on each of them personally.

“Having a nonprofit come in and just making the change themselves is the easy way, but the harder way is empowering others so they have the tools and the resources to make the changes they want to. That nuance is so important,” Bascon said. “As a future doctor, there's nothing more fulfilling than empowering others so they can live their full lives.”

The ASU Study Abroad Office offers 250-plus programs in more than 65 different countries. Learn more at the Study Abroad website.

Top photo: (From left) Grant Laufer, Olivia Gonzalez and Glenn "Ivan" Bascon (photographed Feb. 1 on the Tempe campus) traveled to Belize to conduct research on the effects of solar power panel use in rural communities. Photo by Deanna Dent/ASU Now

Toothbrush robots. Black widow spider webs. Sparky practicing CPR. Open Door at West campus on Saturday really had it all.At the third event in the Open Door series, visitors learned about anatomy, handwriting analysis and communication; made bracelets and painted masks; played games and had a ton of fun learning about what the schools and units of ASU are working on.Couldn't make it to West campu... 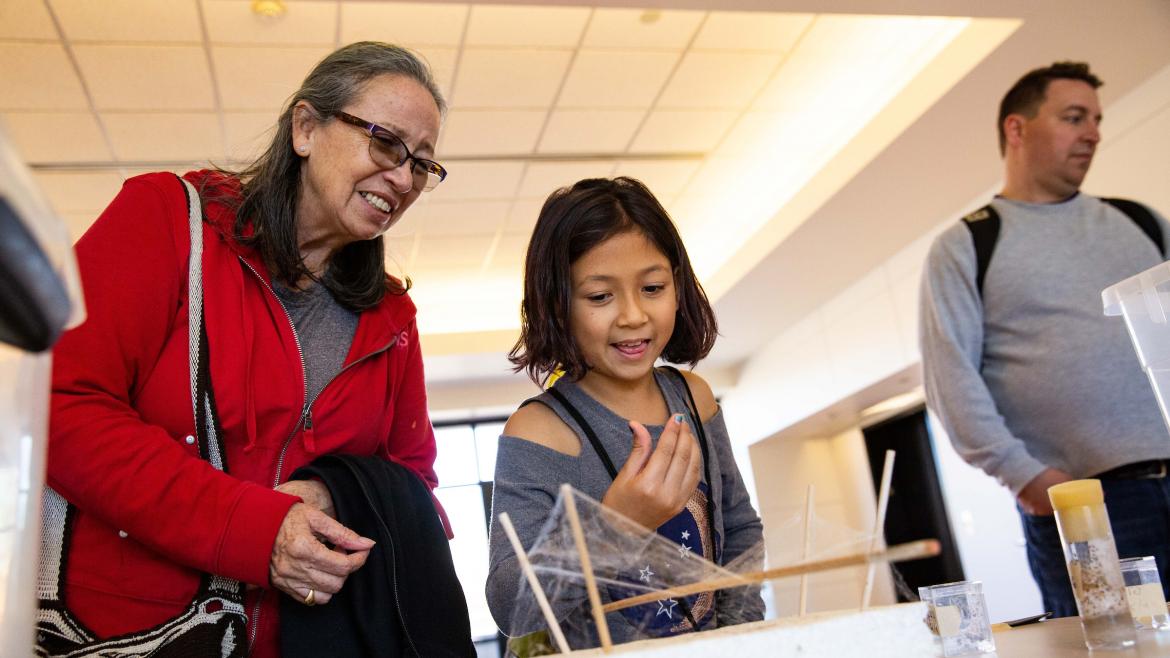 Visitors to the third ASU Open Door event are delighted by demos, experiments, activities and all manner of fun

At the third event in the Open Door series, visitors learned about anatomy, handwriting analysis and communication; made bracelets and painted masks; played games and had a ton of fun learning about what the schools and units of ASU are working on. 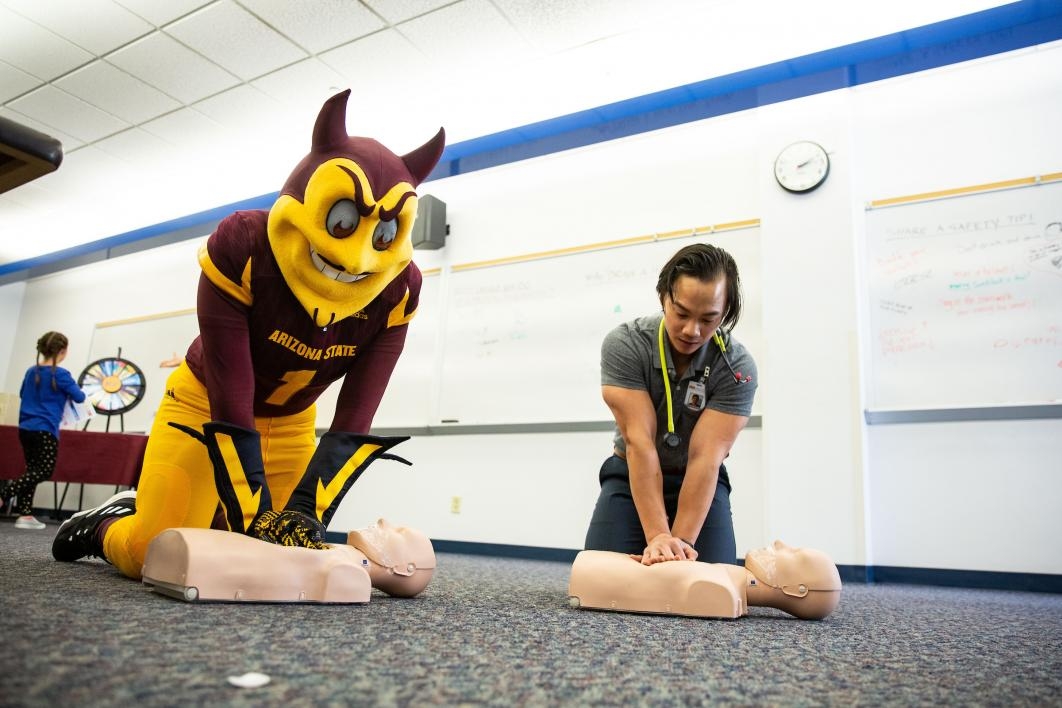 Sparky gets a lesson in CPR from Graham Sawicki during the 2019 West campus Open Door on Saturday. 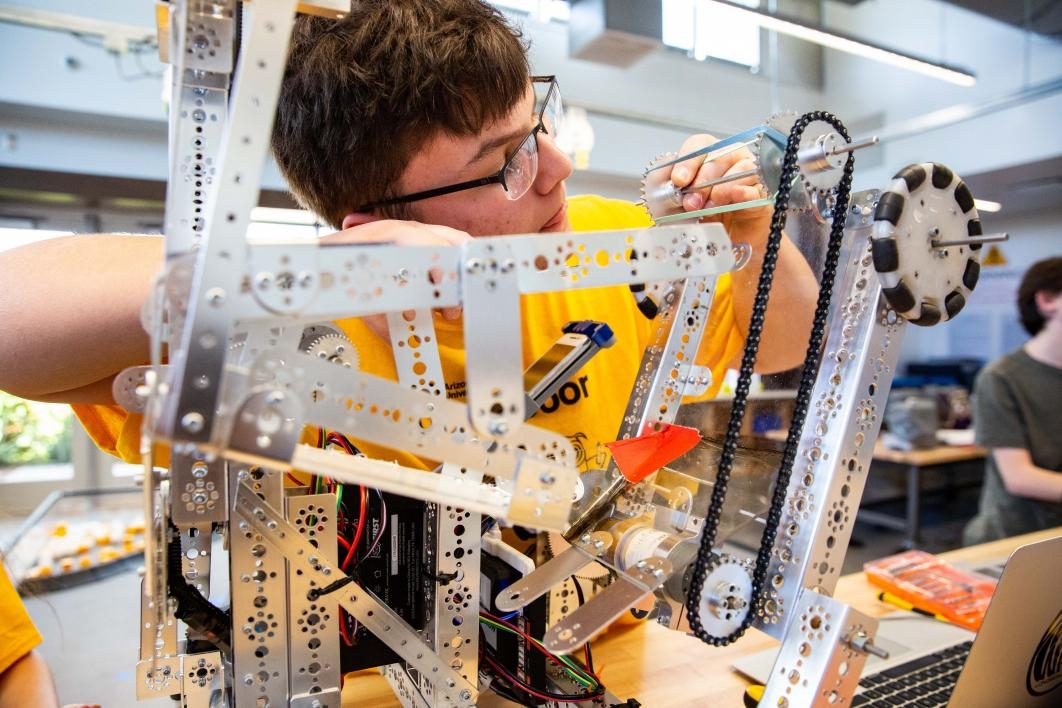 Michael Buerger conducts a quick fix on his robot at the Herberger Young Scholars Academy presentation during the 2019 West campus Open Door. 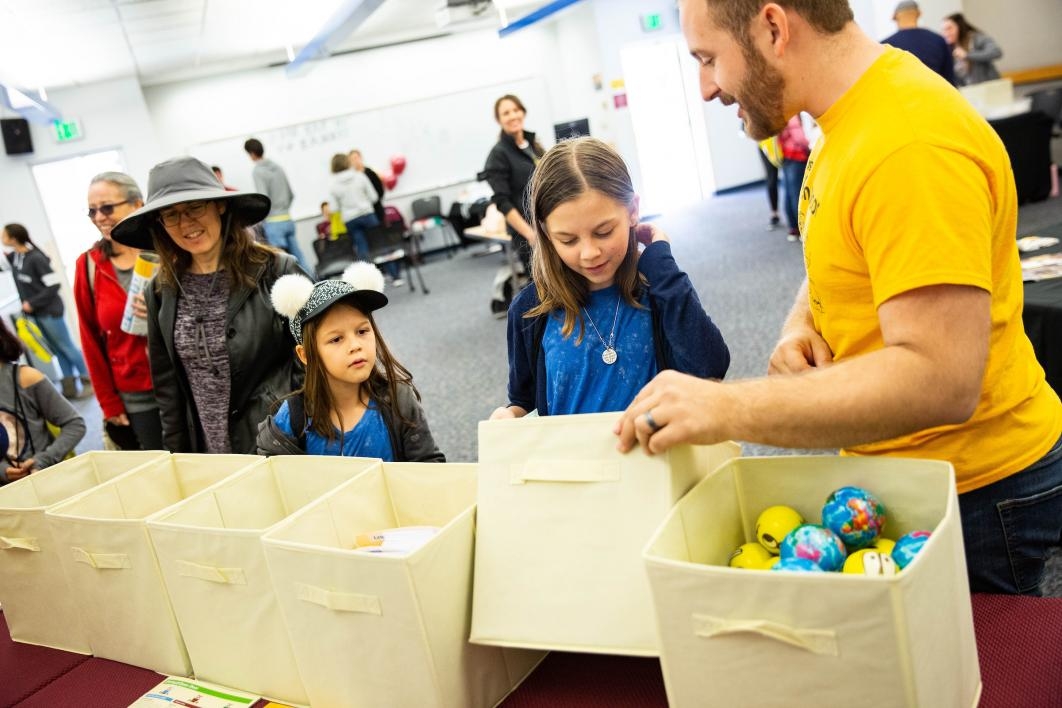 Laura Hamilton takes a photo of her daughter, Mia Hamilton, posing with Sparky at the Experiential Health Activities booth. 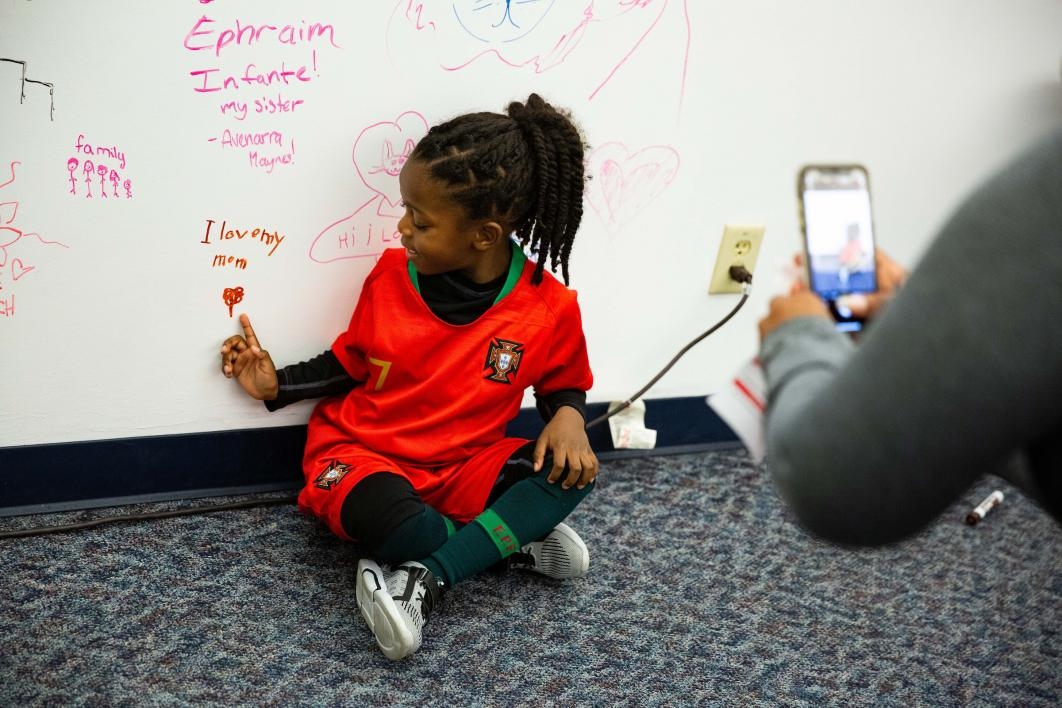 Karine Joseph takes a picture of her son, TJ Joseph, with his "I love my mom" message on the ASU West Communication Lab wall. 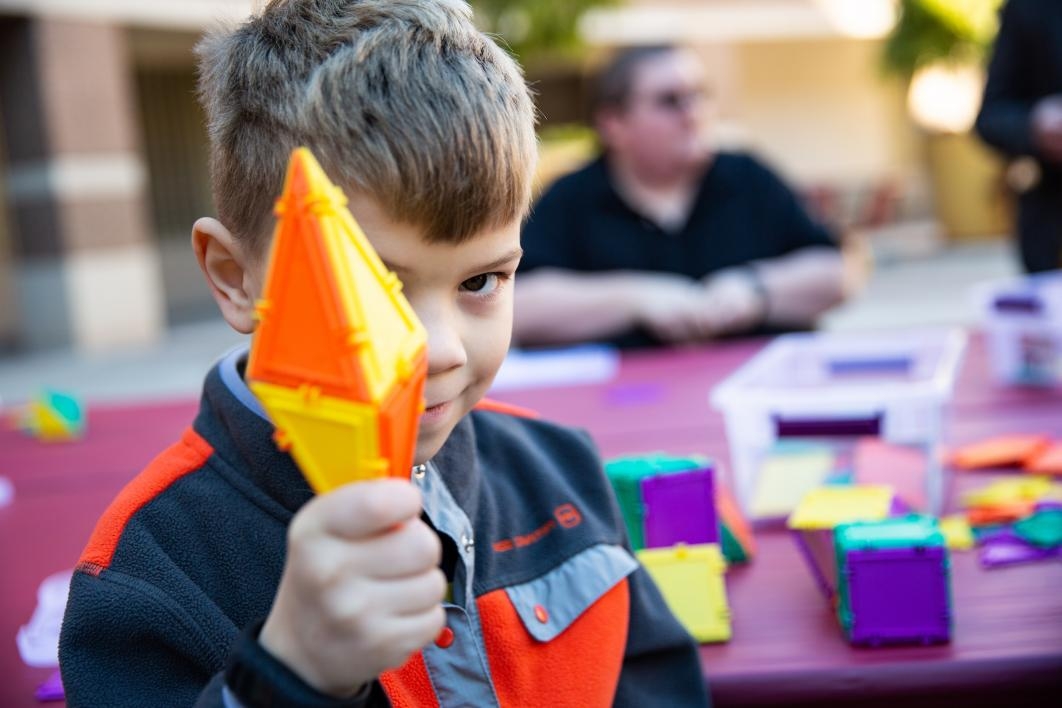 Kyle Nowacki poses with his geometiles at the booth hosted by Applied Mathematics and Statistics at New College. 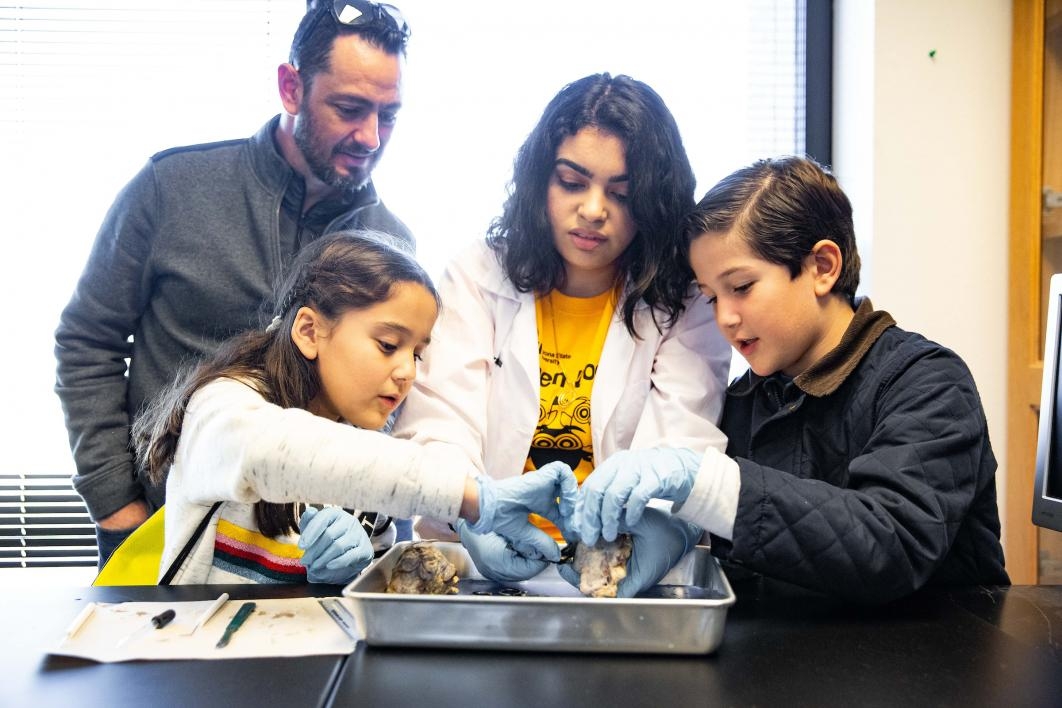 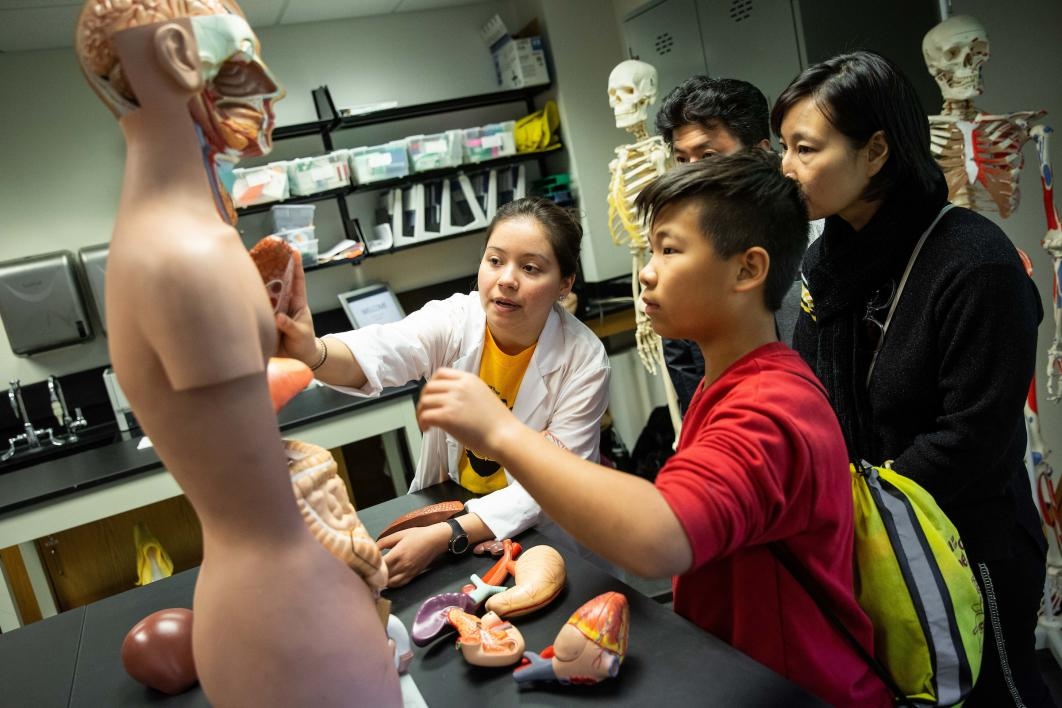 Pharmacology and toxicology sophomore Priscilla Pacheco helps Ryan Wang as he tries his hand at the human anatomy organ model as his parents, Bobby and Rebecca Wang, watch at the Biomedical Research Lab. 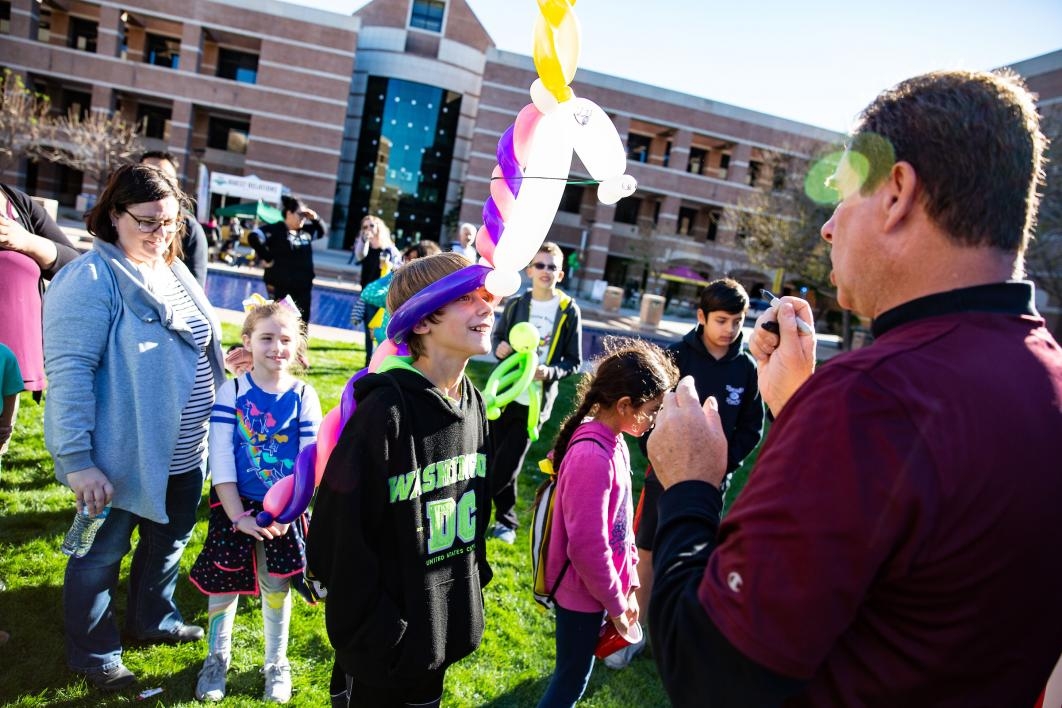 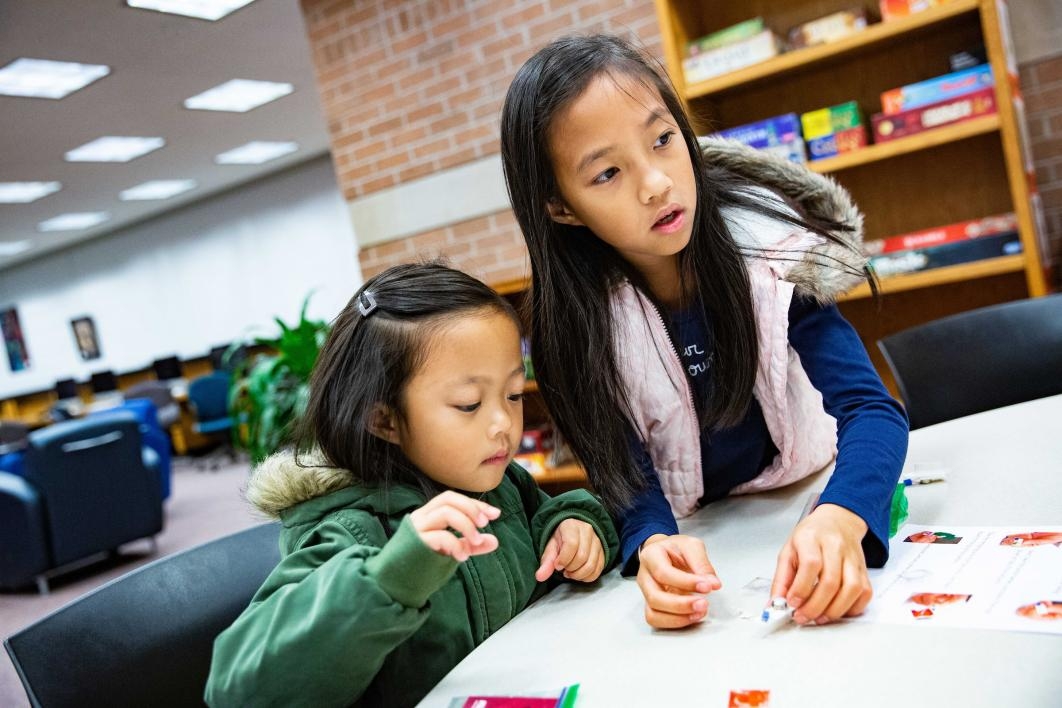 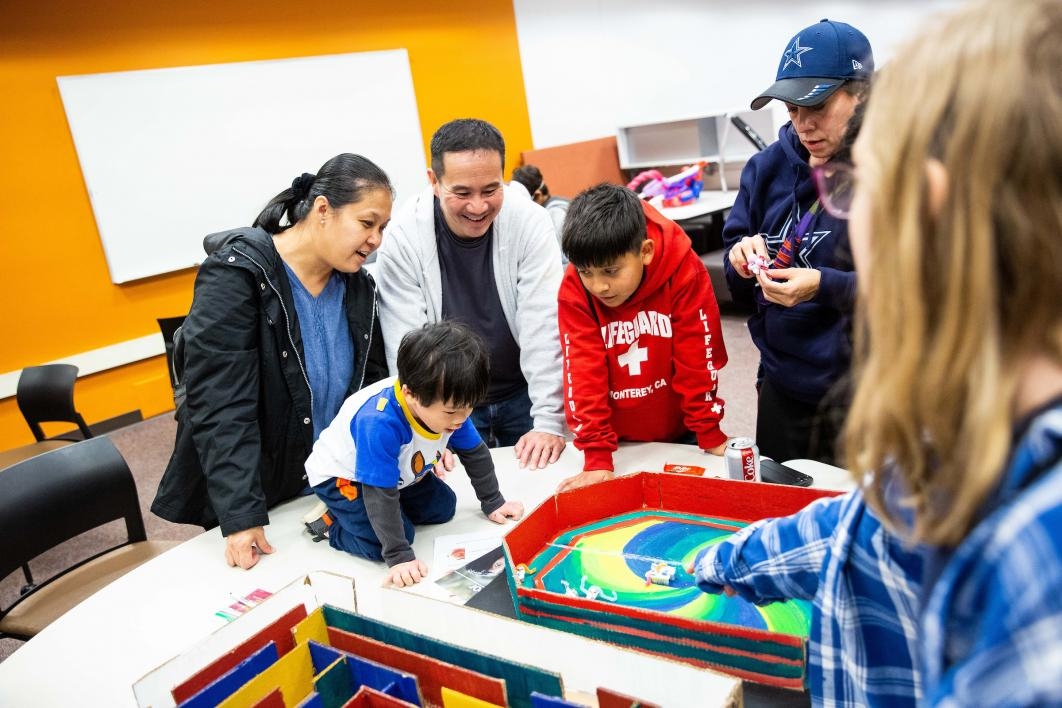 The Vuong family watches as toothbrush robots fight each other during the 2019 West campus Open Door. 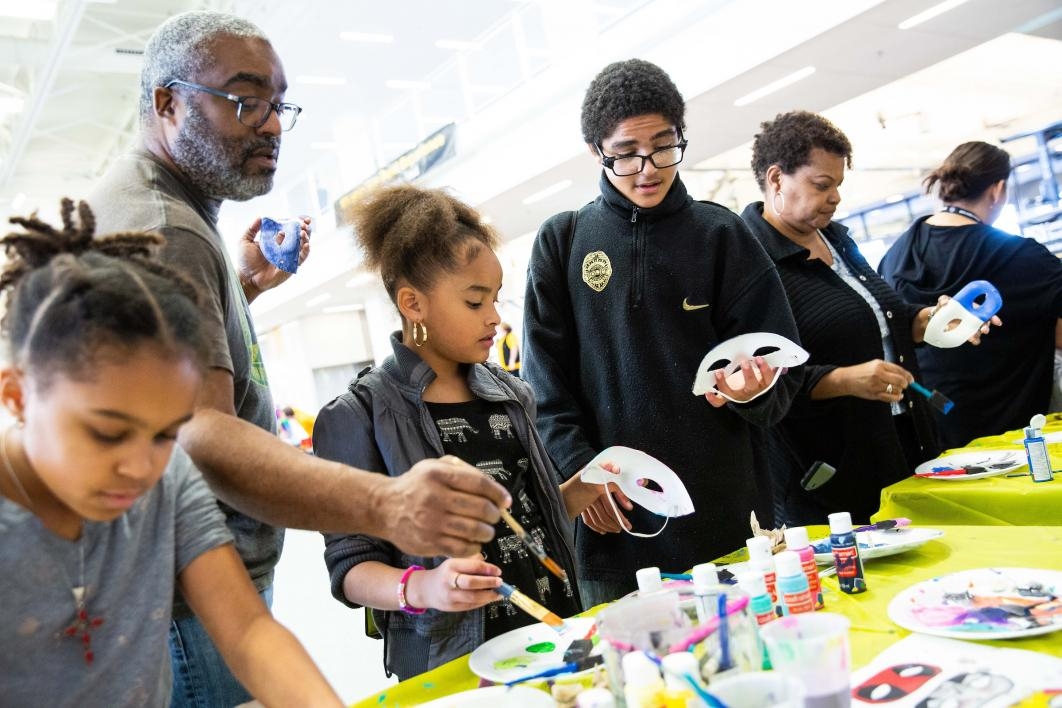 Erica Anderson (center) and her older brother, Anthony Anderson, along with their family paint masks during Open Door. 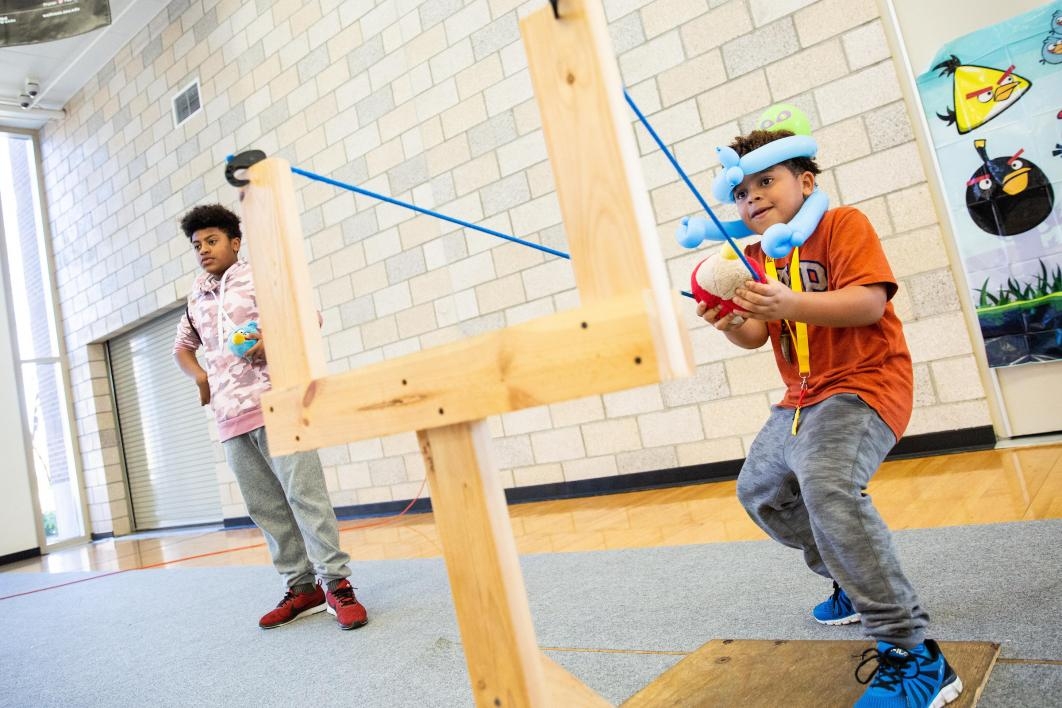 Zaheem Mitchell pulls back on an Angry Bird toy as Zakye Mitchell watches at the Sun Devil Fitness Center on the West campus. 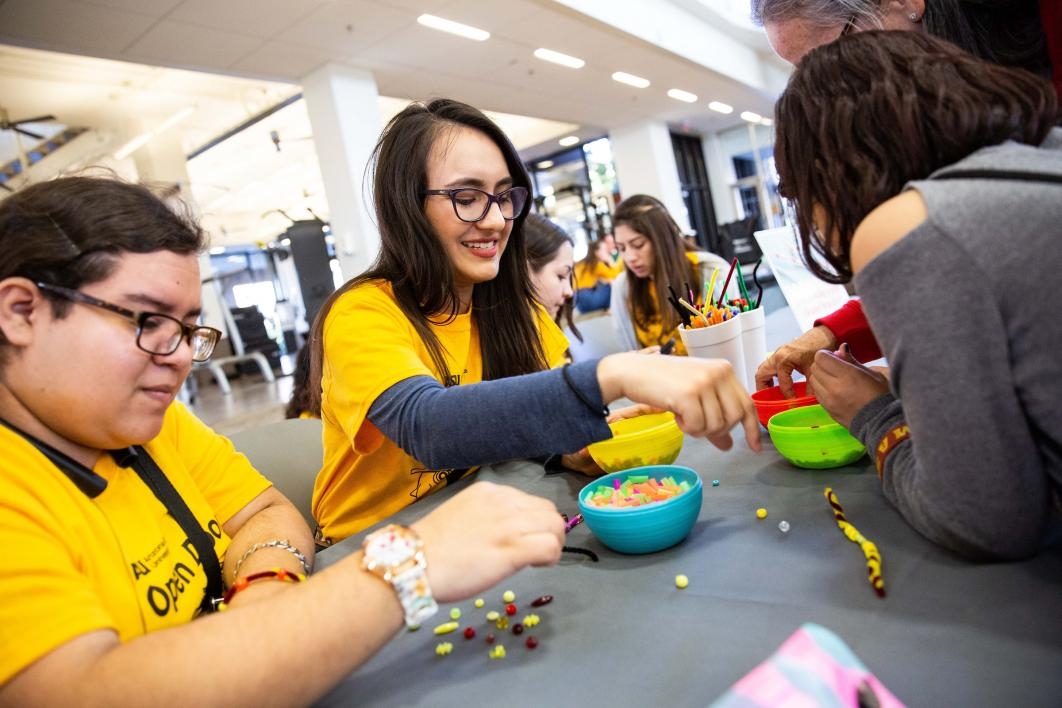 Couldn't make it to West campus? Don't worry, you have another chance at Open Door excitement:

Read more about what's in store at Tempe, including information on the free app that can help visitors map out the activities they want to visit. Get free tickets in advance online.

Top photo: Patricia Acosta and her granddaughter Camille Mieth touch a black widow web to see how strong it is during the 2019 West campus Open Door event on Saturday. Photo by Deanna Dent