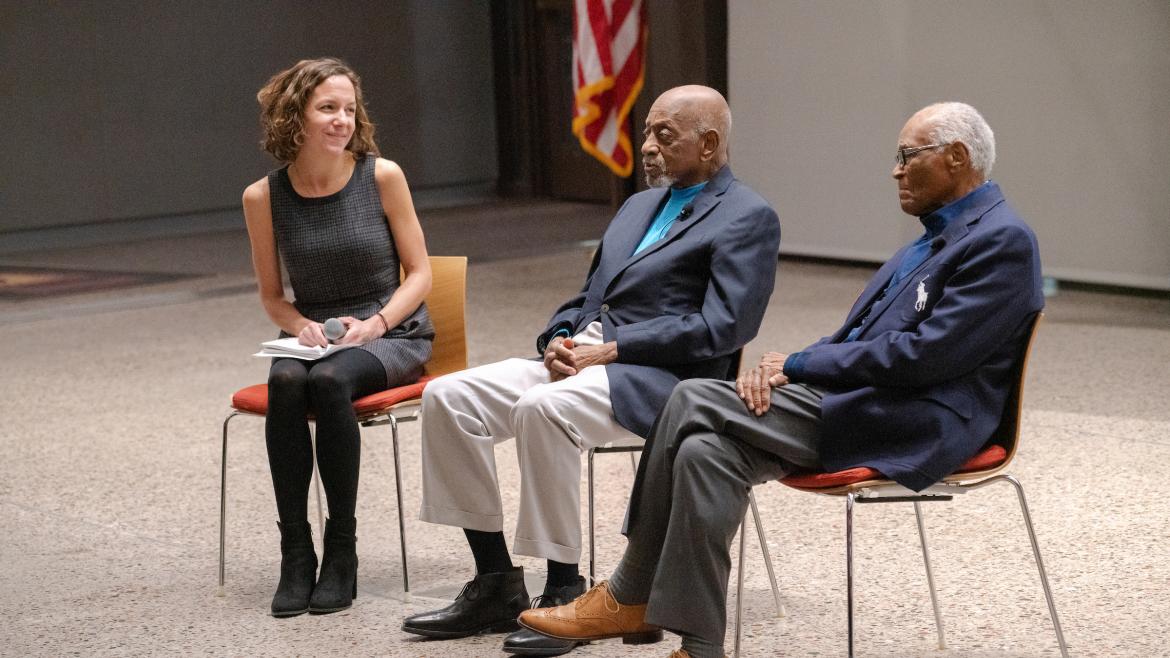 The dominating performances by nine African-American male track athletes in the 1936 Olympics was an inspiration for those who followed them, according to two former Olympians who spoke at Arizona State University on Monday.

The nine black men won 13 total medals in the Olympics in Berlin, under the nose of Adolf Hitler. Of the 15 gold medals won by the U.S. team at those games, eight were won by those nine athletes.

Their success opened the door for other African-American athletes, including Herbert Douglas, the oldest living African-American Olympic medalist, and Harrison Dillard, the oldest living American gold medalist. Both earned medals in the 1948 Olympics in London; Dillard added two more in 1952. They spoke at an event sponsored by the Global Sport Institute at ASU at the Downtown Phoenix campus.

Douglas, who will be 97 in early March, co-produced the film with Bob Lott and said he was motivated by what happened to Owens, who faced discrimination after he returned from the 1936 Olympics.

“Jesse Owens was the greatest athlete during my time in the 1930s and '40s, when I competed,” said Douglas, who won a bronze medal in the long jump.

“He never won the Sullivan Award, the award for being the greatest amateur athlete in the U.S., even after he electrified the world.”

Years later, Owens told Douglas that the slight stung him.

“I carried that with me, and that’s why I told Bob we had to do something and make this film,” Douglas said.

The documentary described the personal and professional success of the nine men after their Olympic years. Pollard earned a law degree and had a long career in the Foreign Service. Metcalfe earned a master’s degree from the University of Southern California and went on to become a U.S congressman.

The discussion was moderated by Victoria Jackson, a sports historian and lecturer of history in the School of Historical, Philosophical and Religious Studies at ASU.

“If we look at African-American athletes in the country, they are the best and brightest because they always had to be better,” she said.

“When we say that sport is just a pastime, and this stuff doesn’t really matter, and we want to step away from the reality of the world and have fun — it’s simply not the case.

“Every type of system at work in the broader society is in sport as well.”

After the successes of 1936, discrimination persisted. Dillard, 95, described how during the 1948 Olympics, the black athletes were segregated.

“The African-American athletes intentionally, or accidentally perhaps, all lived together in one area of the village. That’s all I ever say about it. We were in a section that was just us,” he said.

Douglas was asked about the current activism of current athletes, including Colin Kaepernick, a former player in NFL who protested police killings of black people by kneeling during the national anthem.

“If I had done that when I was playing football for Pitt, I wouldn’t be here today,” Douglas said. “Through the years I watched the progress. How many African-Americans play football today? Seventy percent. It’s the first time we have had the leverage to do that.”

“I think that athletes have become more apparent in making America live up to its dream that all men are created equal,” he said.

“There is no doubt that sports has played an immensely great part in that story.”

Dillard then addressed Douglas, his friend: