Boris DeCourt was about 12 years old when he knew he would be committing his life to biomedical research. During those tender years, his 38-year-old father had a heart attack, an incident so serious that it called for a transplant. The young DeCourt traveled with his father to a Paris hospital that could perform the surgery.

“It was a special kind of transplant that was done in an extreme emergency,” DeCourt said. “He had a second heart — connected to his original heart. He had two hearts.” DeCourt explained that the donor was a person only slightly older than himself. 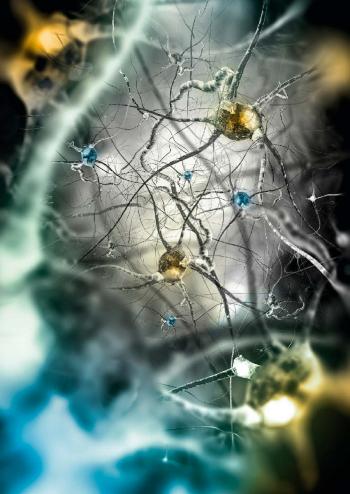 DeCourt's results suggest that lenalidomide, an anti-cancer drug, has the potential to lower Alzheimer's disease brain pathology and to do so over a long period of time. Download Full Image

Afterward, DeCourt attended medical seminars to learn about cardiology and cardiac surgery. He was struck by how much more there was to learn and committed then and there to devote his life to research.

His doctoral studies combined neuroscience and neuropharmacology. “I wanted to understand what the drugs do," he said. "What does it mean to give drugs to patients, what are the feedbacks and side effects we can anticipate from drugs?

“Now, I am doing basic research with a foot in medical research,” said DeCourt, an assistant research professor at the ASU-Banner Neurodegenerative Disease Research Center and a researcher at Arizona State University's School of Life Sciences.

The road from focusing on the heart to focusing on the head led him from France to Indiana, where he did his postdoc at Purdue and studied axonal outgrowth and regeneration in spinal cord injuries and traumatic brain injuries. Arizona would be DeCourt’s next stop, working with Marwan Sabbagh at the Banner Sun Health Research Institute. It was during his time with Banner that he noticed that inflammation was present in all stages of Alzheimer’s disease.

His steely focus on understanding the Alzheimer-inflammation connection is paying off today with two grants that will help him and his team study the effects of an anti-cancer drug, lenalidomide, on addressing the ravaging effects of Alzheimer’s disease. 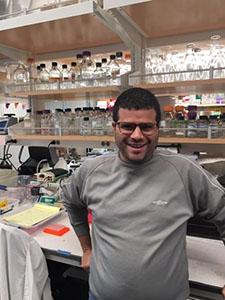 Boris DeCourt is assistant research professor at the ASU-Banner Neurodegenerative Disease Research Center and a researcher at ASU's School of Life Sciences.

The National Institutes of Health has awarded DeCourt and his team $3.2 million to test the efficacy of lenalidomide, an FDA-approved drug that is used today to treat a variety of blood cancers. Both are five-year grants. The NIH-funded trial will include 30 patients who will receive the intervention for 12 months. The patients will receive brain imaging prior to the intervention and six months after so that DeCourt can identify changes. Inflammatory markers will be measured every three months. The team will also measure cognitive performance.

The Alzheimer’s Drug Disease Foundation has provided $1.3 million to fund a similar trial for 45 patients over six to 12 months.

Lenalidomide is in popular use among oncologists, meaning the researchers will have access to data about patients with cancer.

“This allows us to know about 90 percent of what we should expect,” DeCourt said.

Not content to be confined to the lab, DeCourt is passionate about doing research that connects him to doctors and patients. In his new clinical trial, lenalidomide will be given to Alzheimer’s patients with mild cognitive impairment. He will be working with his previous mentor, Sabbagh, in Sabbagh’s new role as director of Cleveland Clinic Nevada’s Lou Ruvo Center for Brain Health, one of the largest clinical trial sites in the country,

“Basically we said that if it works with the mice, why don’t we try a clinical trial? And finally again last year, we submitted a grant — got pre-approval and this summer; everything was approved,” DeCourt said. This, after being rejected three times by the Alzheimer’s Association.

“Early results suggest that lenalidomide has the potential to lower Alzheimer’s disease brain pathology, and to do so over a long period of time, by normalizing the activity of enzymes responsible for the production of Aβ to nonpathological levels,” DeCourt said.

Lenalidomide is an immunomodulatory agent, in the same class as its more notorious cousin, thalidomide, but without the same level of toxicity. The compound alters the actions of the inflammatory molecule, tumor necrosis factor alpha (TNF-α).

According to DeCourt, “the vast majority of therapeutic interventions targeting Alzheimer’s disease until now have focused on monotherapies to alter a single neuropathology, including BACE1 inhibitors, gamma-secretase inhibitors and modulators, and active and passive immunization against amyloid beta. Unfortunately, all these approaches have failed to meet the clinical endpoint of significantly slowing cognitive decline in Alzheimer’s disease.”

“Alzheimer’s disease is a multi-factorial disease,” DeCourt said. “To treat it we need multiple drugs or drugs that have multiple effects. Lenalidomide not only regulates inflammation, it regulates lots of different things.”

According to Research Features magazine, “inflammation is a natural reaction of the body, aimed at fending off foreign invaders like cancer cells. In the case of Alzheimer’s disease, it has been shown that Aβ and amyloid plaques damage the structure and function of the cells. This stimulates the immune cells located in the brain to develop an inflammatory reaction in an attempt eliminate the cause of the cell injury (Aβ and amyloid plaques), and the wounded cells and tissue. In the process, immune cells release an array of inflammatory molecules (called cytokines and chemokines), which may contribute to further cell dysfunction and neuronal death.”

DeCourt said it is yet unclear whether inflammation is a cause or an effect in the development of Alzheimer’s.

“But what we do know is that at some point, it kicks in and when it kicks in, it never stops. It aggravates the disease,” he said.

“Inflammation is pervasive to many neurological disorders, yet no clinical trial has demonstrated the efficacy of anti-inflammatory agents for Alzheimer’s disease,” DeCourt said.

Currently, the cost of lenalidomide in the U.S. is fairly prohibitive at $500 per pill. DeCourt explains that in India, it is only $8 per pill. Safe harbor laws allows DeCourt and his team to use a drug that is not produced in the U.S.

According to DeCourt, if the “trial is successful, lenalidomide will become one of the very few compounds capable of lowering several neuropathological features associated with Alzheimer’s disease. Making the opportunity even more attractive is the fact that the drug is already FDA-approved for cancer treatment, so it could rapidly be repurposed in a Phase II study.”

“If the drug works, it has huge potential here,” DeCourt said.

But that’s not all.

“For me, the idea is really to learn more about Alzheimer’s disease, and if it’s possible, to find a cure.”

In the meantime, DeCourt encourages everyone to exercise. According to a new study, “participating in 150 minutes of exercise a week — just 2.5 hours of walking briskly or another physical activity — could delay an inherited form of Alzheimer’s."

The cross-sectional study, recently published in Alzheimer’s & Dementia: The Journal of the Alzheimer’s Association, gathered 15 years of data from 459 participants.

DeCourt runs a startup that organizes bicycle races and other running events. He’s happy to be bringing this resource to Las Vegas. “I want to combine this personal enterprise with the research enterprise — moving to Las Vegas will allow me to create events,” he said. “From these events, we will recruit volunteers to participate in our studies.”

Though DeCourt has moved to Las Vegas, he plans to remain connected as he will be using ASU’s mass spectrometry technology – a technology that is not currently available in Las Vegas. In addition, he will continue research collaborations with Karen Sweazea, an associate professor in ASU’s College of Health Solutions and the School of Life Sciences.

American Indian students invest in their future at RECHARGE conference

Malachi Boni came to ASU’s RECHARGE conference looking for inspiration. Accordingly, the Globe High School sophomore seemed to find it, saying that the event helped him think about his choices after graduation and how going to college might help him fulfill his dreams of becoming a writer.That reaction illustrates the aim of the annual RECHARGE conference, which took place in January at Arizona ...

American Indian students invest in their future at RECHARGE conference

Malachi Boni came to ASU’s RECHARGE conference looking for inspiration. Accordingly, the Globe High School sophomore seemed to find it, saying that the event helped him think about his choices after graduation and how going to college might help him fulfill his dreams of becoming a writer.

That reaction illustrates the aim of the annual RECHARGE conference, which took place in January at Arizona State University's West campus: to provide a platform for American Indian students in grades seven through 12 to invest in their education, future and community. 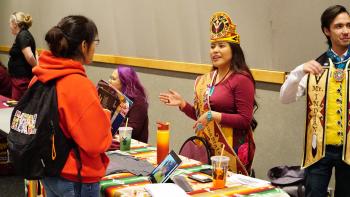 Sponsored by Access ASU and the Office of American Indian Initiatives, the college readiness program has served thousands of students since its inception eight years ago.

Students participated in professional and student panels centered around five learning communities — STEM, arts/design/performance, business/leadership, Native history/languages and public/social services. They also received information on financial aid and attended a resource fair that included Native and ASU resources. The last session of the day was a hands-on activity centered around their learning community.

RECHARGE participant Ashley Lopez is a junior at Desert View High School in Tucson and a member of the Tohono O’odham tribe. She appreciated the amount of detailed information she received at the conference.

“I’ve learned a lot from other peoples’ experience, hearing them talk about how they dealt with things like meeting new people and being away from home,” Lopez said.

Nolan Dayon, an eighth-grader at Greenfield Junior High in Gilbert and member of the Hopi tribe also attended RECHARGE. He hopes to study mathematics and engineering and found the STEM sessions especially interesting. He also felt the information about preparing for college and financial aid were very helpful.

“Financially it will help us out a lot, so I have that knowledge down the road,” Dayon said. 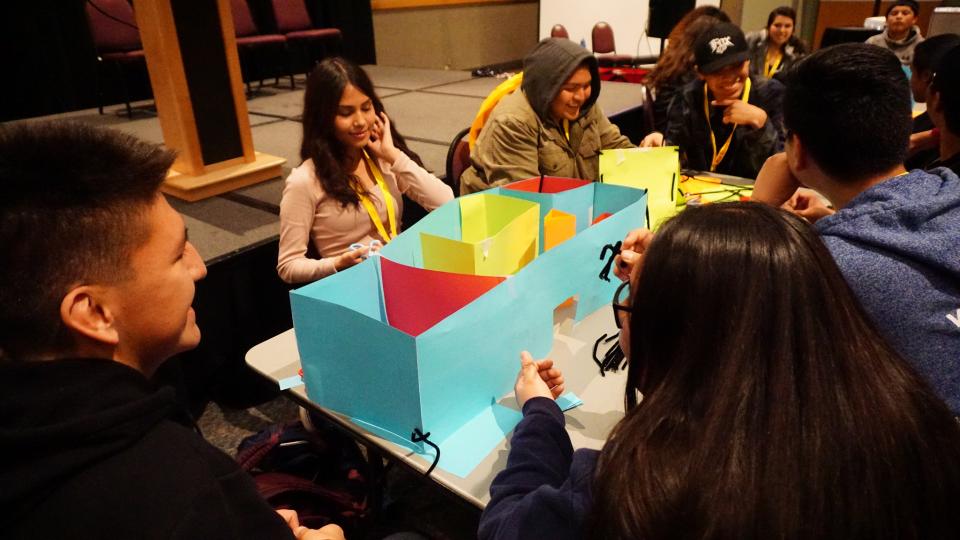 Students participate in a STEM-themed group activity during the RECHARGE conference at ASU's West campus. Photo by Aaron Gould

A second RECHARGE conference is scheduled for Feb. 20 at the West campus.

“The RECHARGE conference and Inspire summer program demonstrate ASU’s commitment to excellence, accessibility and local impact for Native American students, their families and their communities,” said Sylvia Symonds, associate vice president of Educational Outreach and Student Services. “We are pleased to offer support and guidance as they pursue their higher education and career goals.”

For questions about the Inspire Summer Program, contact Danyel Chleborad at Danyel.Chleborad@asu.edu. The application period for the program closes April 1.