Erika Camacho, an associate professor in the School of Mathematical and Natural Sciences at Arizona State University’s New College of Interdisciplinary Arts and Sciences, is the winner of the 2019 Mentor Award, presented by the American Association for the Advancement of Science.

The award honors midcareer academics who have mentored a significant number of underrepresented PhD students and have otherwise played an important role in building a science, technology, engineering and mathematics community that includes women, minorities and people with disabilities. The hundreds of underrepresented students whom Camacho has guided through graduate school include the first Native Hawaiian to receive a PhD in applied mathematics and one of the few African-American women to graduate from Cornell University with a PhD in applied mathematics. 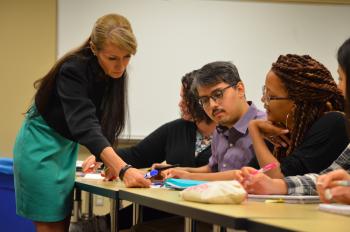 “It is critical to the health and excellence of the STEM fields that we build a diverse and inclusive community,” said Shirley Malcom, senior adviser to AAAS. “We can only accomplish this through the commitment, belief and dedication of individual mentors who embrace the difficult and rewarding work of supporting the development of the next generation of scholars, future faculty and innovators. Erika Camacho exemplifies this drive and these ideals.”

Camacho was born in Guadalajara, Mexico, and grew up in Los Angeles. She became the first in her family to receive a high school diploma when she graduated from James A. Garfield High School. There, she had studied calculus under Jaime Escalante, the beloved Bolivian-American educator who was the subject of the 1988 film "Stand and Deliver."

“I got to where I am today because I had incredible mentors and individuals who believed in me,” Camacho said when the youth development organization Kids at Hope named her honorary dean of its 2018 National Youth Development Master’s Institute. “One of the first people who believed in me was my high school teacher Jaime Escalante.”

Camacho continued to look to Escalante for support during her years as an undergraduate.

In 2003, Camacho earned her PhD in applied mathematics from Cornell University. In 2007, after a year as a postdoctoral researcher at Los Alamos National Laboratory and three years on the faculty of Loyola Marymount University, she joined ASU. Her research focuses on mathematical modeling for use in biology and sociology. She is best known for publishing the first set of mechanistic models to study degenerative disease of the retina.

As a mentor, Camacho works to pass along the inspiration she received from Escalante and others. Her guidance has often made the difference between underrepresented students dropping out and earning their PhD. She founded the Applied Mathematical Sciences Summer Institute and co-directed the Mathematical and Theoretical Biology Institute, providing mentorship to 138 students, of whom 76 were women and 76 were underrepresented minority students. More than 100 of these students have completed doctorate degrees. Camacho has also mentored more than 600 undergraduates and reaches wider audiences by telling her story in keynote addresses and plenary presentations.

In 2018, Camacho received the Presidential Award for Excellence in Science, Mathematics and Engineering Mentoring. Administered by the National Science Foundation on behalf of the White House Office of Science and Technology Policy, the award is the highest honor bestowed upon mentors who work to expand talent in the STEM fields.

The AAAS Mentor Award was established in 1993 and is directed toward individuals in the middle stage of their careers, defined by 25 years or less of mentoring experience. Camacho will receive the award during the 185th AAAS annual meeting in Washington, D.C., on Feb. 17.

Led by Kianna Ibis (22 points) and Robbi Ryan (13 points), the No. 20 Arizona State women's basketball team won its third straight game with a 61-46 win over Washington State on Thursday night. ... Led by Kianna Ibis (22 points) and Robbi Ryan (13 points), the No. 20 Arizona State women's basketball team won its third straight game with a 61-46 win over Washington State on Thursday night.