When Reyna Montoya first moved to Mesa, Arizona, in 2003, it was hard to feel at home.

Violence had forced her family from Tijuana, Mexico, when she was 10 years old, and they’d been making 4 a.m. car trips from the Arizona border to her Phoenix-area school ever since. Now living in Mesa full time, talking about that part of her life felt like a taboo.

“It was very much a ‘don’t ask, don’t tell’ kind of thing — growing up undocumented,” she said. “I didn’t really understand how policies impacted my life until I went to apply to college or get a driver’s license and seeing that I wasn’t able.”

Montoya is one of tens of thousands of undocumented young people across the country to receive protection under the Deferred Action for Childhood Arrivals (DACA) program since its inception in 2012. But the program wasn’t available when Montoya was growing up.

Instead, she navigated the labyrinth of barriers on her own and enrolled at Arizona State University out of high school. In her sophomore year, an immigration and economic policy class through the School of Transborder Studies made her realize she wasn’t alone.

“A lot of my own stories were connected to those policies,” she said. “It was like, ‘OK, there are others like me; I’m not the only one who is being affected.”

Montoya completed a Bachelor of Arts in political science and another in transborder studies, both from the College of Liberal Arts and Sciences, along with a minor in dance in 2012. Today she also holds a master’s degree in secondary education from Grand Canyon University.

Learning about the policies affecting her own life empowered Montoya to help spur change. Now, less than a decade since she graduated, her advocacy network AlientoThe Spanish word "aliento" translates as both "breath" and "encouragement." is giving new DACA generations the support to do the same. 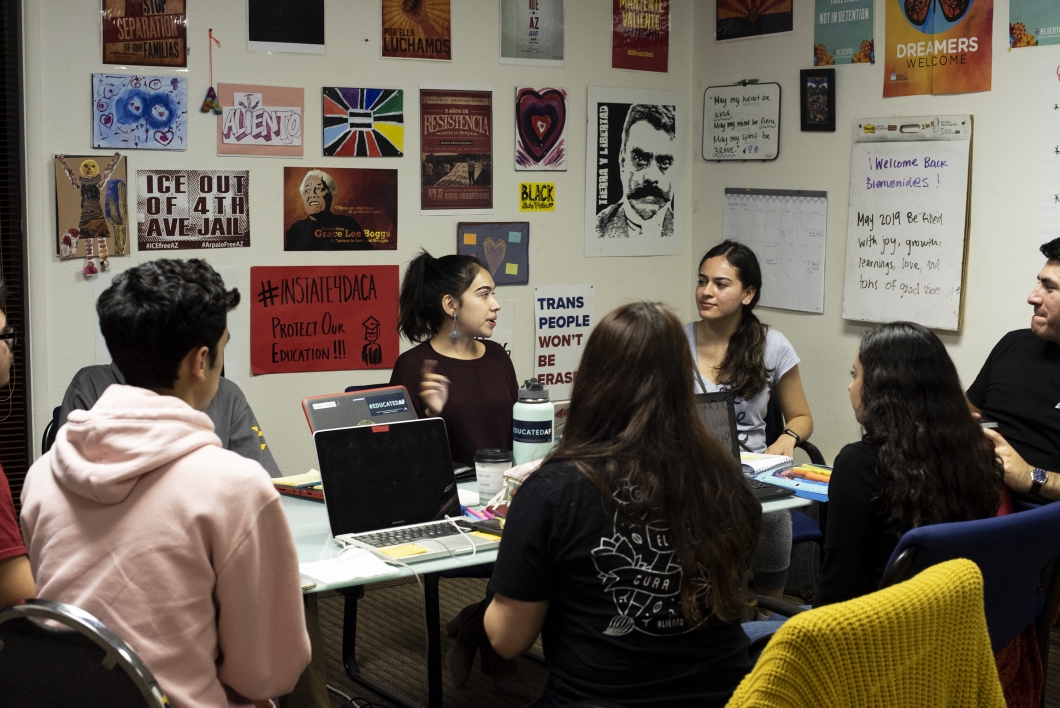 Student participants of Aliento's youth fellowship program meet with Montoya and other staffers ahead of the group's Education Day event. Aliento currently has five fellows from Phoenix-area high schools, community colleges and universities advocating for access to higher education and relief from other barriers of being undocumented. 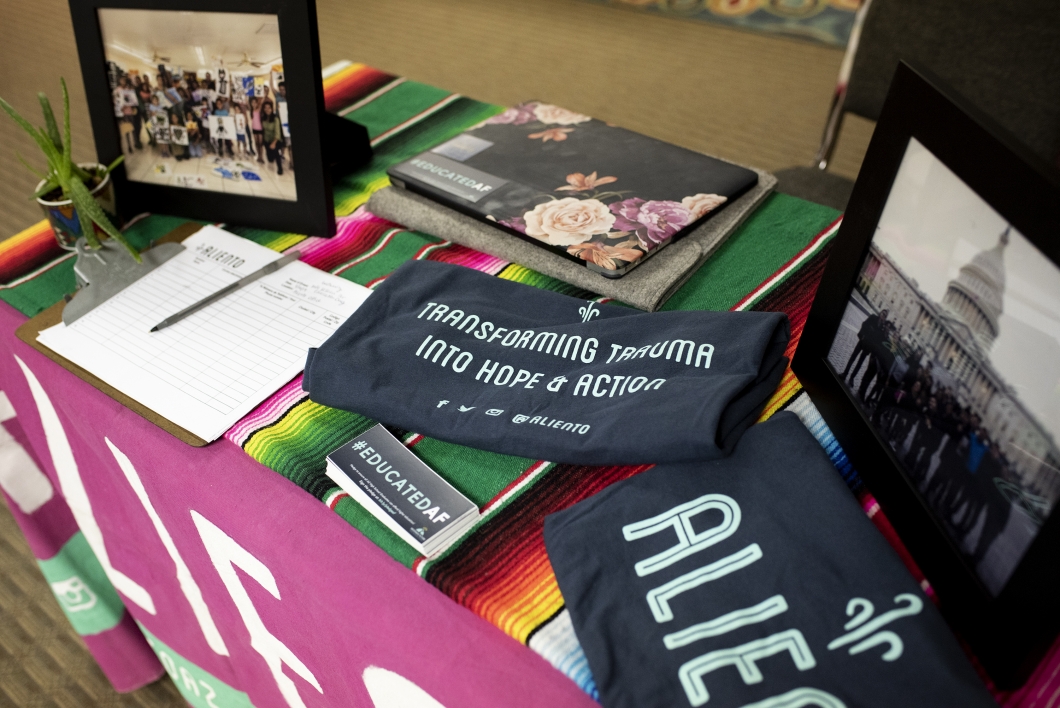 A T-shirt spotlighting Aliento's mission of "transforming trauma into hope and action" is presented with other promotional materials during an informational event at the group's Mesa office. 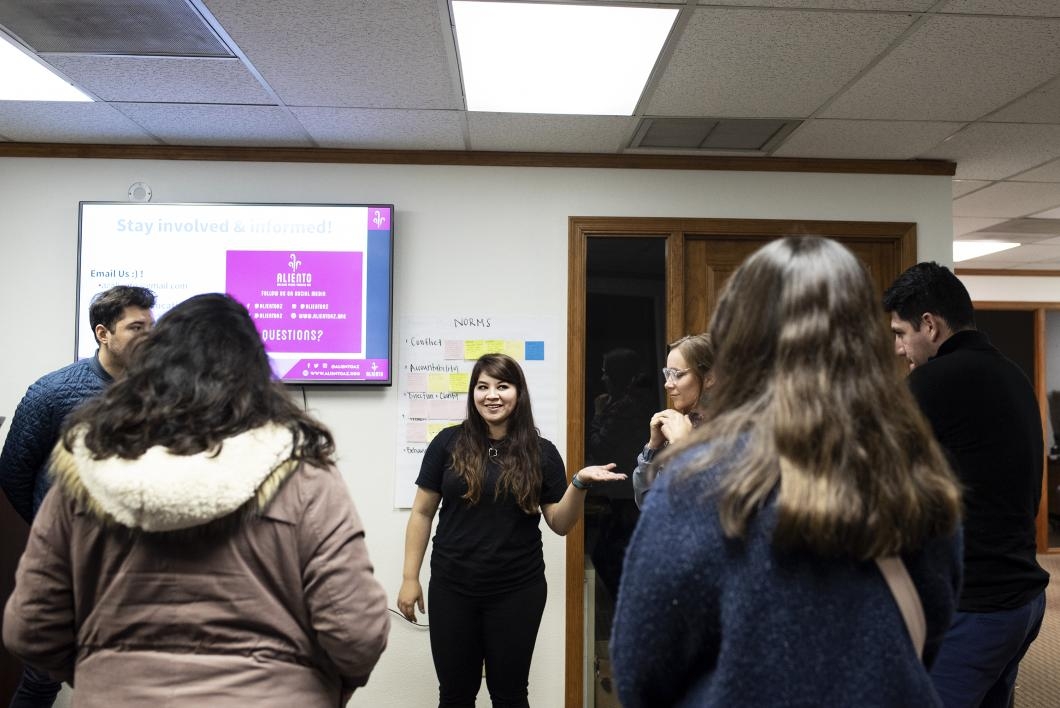 Through a combination of youth leadership initiatives, art and music events and educational outreach programs, Montoya's Aliento aims to create a multifaceted space where undocumented students and families can advocate for themselves. 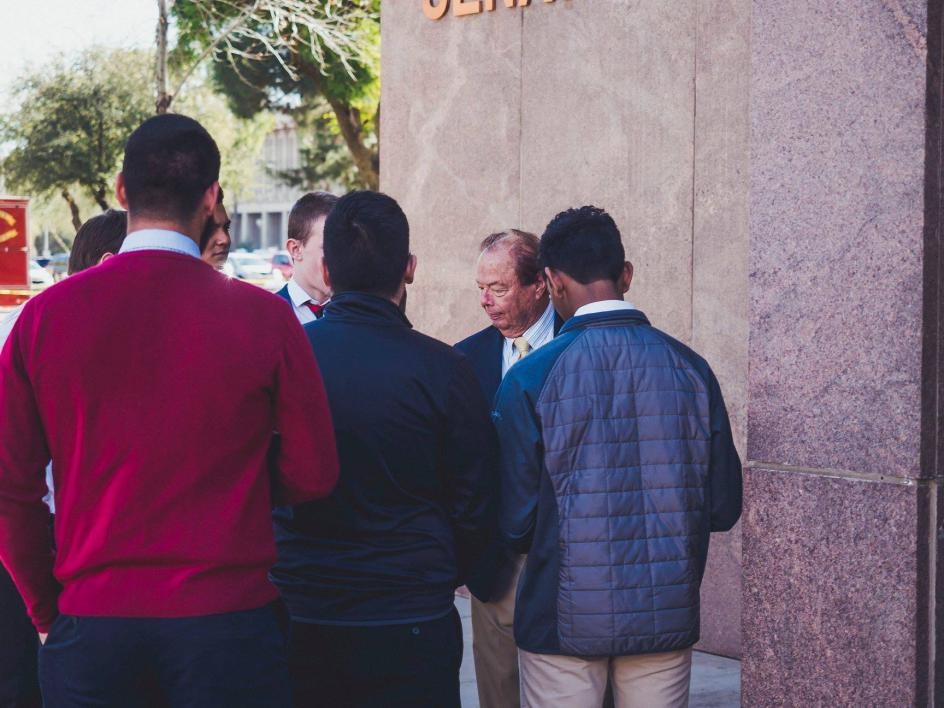 The birth of Aliento

After leaving ASU, she was eager to join the fight to help undocumented people like her. But working in national advocacy groups, she felt disillusioned by how much was going into what felt like few discernible results. The feeling worsened when, a year after graduation, her father’s deportation proceedings sent the family tumbling into crisis.

“I didn’t really know how to process the idea of not having my dad,” she said. “During that time my refuge was dance — it was my escape.”

After a nine-month legal battle, Montoya’s father was granted the right to stay in the United States. By then, she was working as a high school teacher in south Phoenix and hearing from students whose experiences with immigration policy mirrored her own. Getting DACA protection didn’t always mean the end of their problems, and the national aid groups she’d started out working for still seemed to be having little impact on the ground. Montoya started to think that if she’d found solace in expression and education, maybe others could too.

“I wanted a place where young people could go to process these feelings, while also trying to change the policies and structures causing the trauma in the first place,” she said.

Joining forces with Ileana Salinas, an alumna of the ASU Department of Psychology, Montoya invited families across Maricopa County to talk about their concerns. In 2016, a packed forum addressing DACA, deportation and immigration marked the birth of Aliento.

Over two years later, the group hosts regular art and music workshops, community organizing initiatives and informational sessions. A fellowship program also pulls younger students into the leadership fold, including some from ASU and community colleges across the Valley. The venture has also earned Montoya a spot on the Forbes 30 Under 30 list and a Spirituality Award from the Muhammad Ali Humanitarian Awards.

A new era of activism

Montoya says her diverse studies within the college provided an interdisciplinary framework for the holistic approach she employs today.

“I was learning about my own identity within current policies while at the same time thinking about the role of government in society in my political science classes, and then really making sense of it all through dance,” she said. “It really allowed me to find my own voice and create something entirely my own.”

Going forward, she sees Aliento giving the next generation of leaders the space to do the same.

That vision was showcased this January at Aliento’s Education Day. In 2018, an Arizona Supreme Court ruling disallowed in-state tuition rates for DACA recipients, shooting costs up as much as 200 percent.

Almost a year later, the Aliento event gathered some 250 undocumented students and allies from around Arizona to tell state and local lawmakers how they’d been affected. Dressed in business attire, they headed to the Capitol to make their case to representatives.

For Montoya, the event demonstrated her group’s impact.

“It was really beautiful getting to witness all the leadership development we’ve been doing with youth get put into action,” she said. “There were kids as young as 14 leading meetings with legislators and telling their stories.”

These days, Montoya wears a necklace in the shape of Arizona around her neck. She says it’s hard to imagine being anywhere else. Even as the future of DACA remains uncertain, Aliento is a chance to give back.

“Going to ASU and meeting other ‘Dreamers,’ it really made me feel less alone,” she said. “There is so much hope and resilience in young people, I want this to be the place they’re reminded they have the power to change the things they don’t like.”

Top photo: College of Liberal Arts and Sciences alumna Reyna Montoya is the founder of Aliento, a support network for undocumented students and families that aims to foster the next generation of community leaders. Photo by Alisa Reznick

With a strong group of returning players, Arizona State beach volleyball looks to build on that experience to have a strong 2019 season. ... With a strong group of returning players, Arizona State beach volleyball looks to build on that experience to have a strong 2019 season.