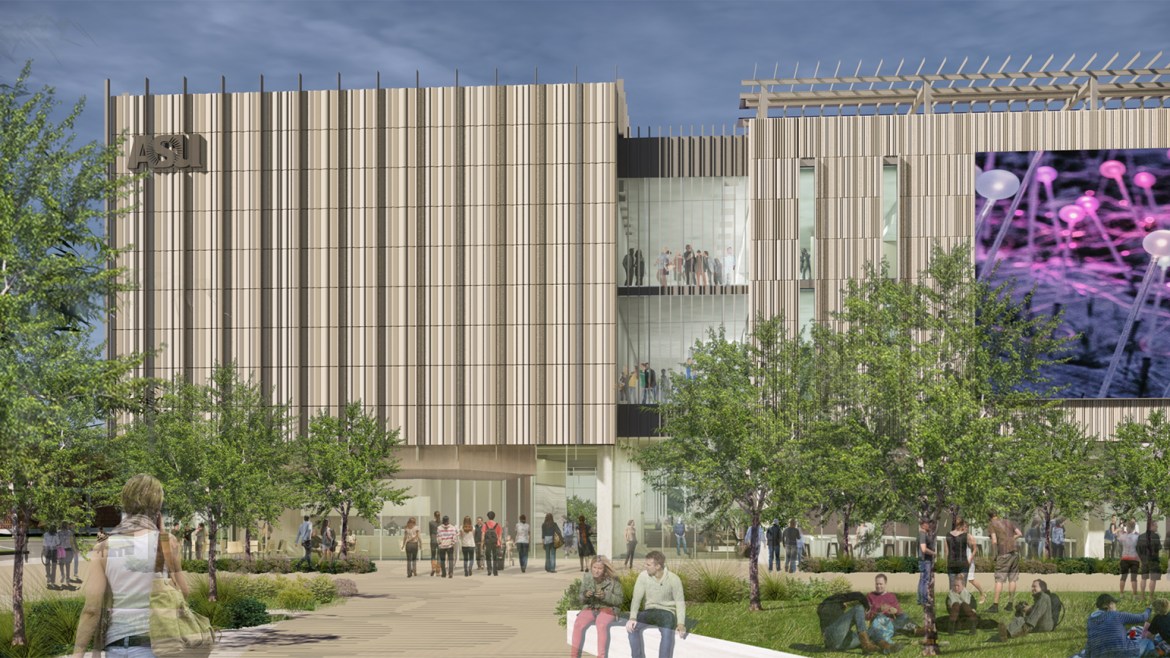 New ASU location in downtown Mesa will be a digital innovation hub.
February 5, 2019

“This will be the place with everything digital you can possibly imagine, every level of creativity, every level of new company idea and spinout in science and technology and the arts,” Crow said Tuesday at the Mesa “State of the City” breakfast, sponsored by the Mesa Chamber of Commerce.

“If you travel around the world, there are a few significant digital innovation centers that exist — in Sydney, Hong Kong, Singapore, London, New York City. We’re building one for the Western United States here in Mesa.”

The new ASU Mesa location — scheduled to open in fall 2021 — will house the ASU Creative Futures Laboratory, including academic programs offered by the Herberger Institute for Design and the Arts related to digital and sensory technology, experiential design, gaming, media arts, film production, and entrepreneurial development and support.

“I consistently hear the words ‘augmented reality, artificial intelligence, 3D design,’ ” he said. “Mesa is very excited about what is now the reality of ASU coming to our downtown Innovation District.” 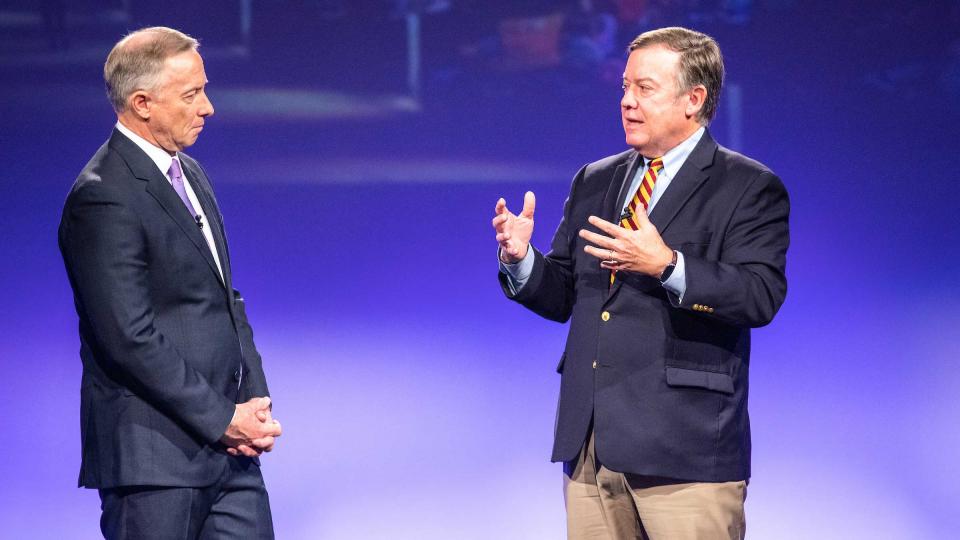 “The hottest thing right now that people are looking for is, ‘Show me a kid who is trained in the arts but also is digitally capable,’ ” he said.

“What we’re looking to do is have a creative center. High school kids, college students attending ASU, businesses in the community — everyone will be a part of this.”

The centerpiece of ASU's presence in downtown Mesa will be a five-story building to be constructed at Pepper Street and Centennial Way, which will draw more than 750 ASU students, faculty and staff to downtown Mesa. Last month, the Mesa City Council selected the architects to design the 118,000-square-foot academic building.

The ASU building is part of the city's efforts to build an Innovation District in downtown Mesa. The district will include The Plaza at Mesa City Center, a two- to three-acre gathering space just south of the building, with an open community space, water features and seasonal ice rink.

The ground floor of the new building will contain an exhibition gallery, screening theaters and a cafe. The upper floors will include production studios, fabrication labs, flexible classrooms and spaces for collaborations with community and industry. The building also will feature an enhanced-immersion studio where users can create augmented realities and map virtual spaces onto physical environments.

Faculty in the School of Film, Dance and Theatre already have been brainstorming with the architects on specifications for the new space, such as the best size for the production studios and whether to include a full-size kitchen, which would not only service students who will be using the space around the clock but also could be used as a set for filming.

ASU also will offer an Innovation Studio in downtown Mesa, run by Entrepreneurship and Innovation at ASU. The studio would offer a physical space for collaboration and also connect the startup community to the academic programs offered, according to Ji Mi Choi, associate vice president of Knowledge Enterprise Development at ASU.

“It could be everything from an events space to community-facing workshops, seminars and boot camps on startup methodologies, to demo days or a food showcase,” Choi said.

ASU also is in talks to create a coworking space at the Innovation Studio, she said.

“It could be for one person who’s kind of dabbling with an idea, or it could be an existing company with one or two employees or part-time employees,” Choi said.

Entrepreneurship and Innovation wants to leverage the existing commitment to the arts in Mesa, she said.

“We can see having production-based companies that are in gaming and virtual reality and augmented reality, as well as film and storytelling because of the academic programs that will be there,” she said.

“We think there will be a center of gravity around arts entrepreneurship but not exclusive to that.”

ASU at Mesa City Center will be about seven miles from the Tempe campus (about a 20-minute ride on the light rail) and about 16 miles from the ASU Polytechnic campus in east Mesa, which offers programs in engineering and specialty degrees like air traffic management and professional flight.

The architects are Holly Street Studio, which designed the renovation of the old downtown Phoenix post office into the Student Center at the Post Office in 2013, and Bohlin Cywinski Jackson, which has designed buildings at Disney's Creative Campus, the Colorado School of Mines and the University of California, San Diego. The design and construction team also features DPR Construction, whose projects include Pixar Animation Studio, as well as ASU Polytechnic and SkySong locations.

Three Sun Devil gymnasts with deep-rooted family connections in the military feel sense of honor for Salute to Service meet ...