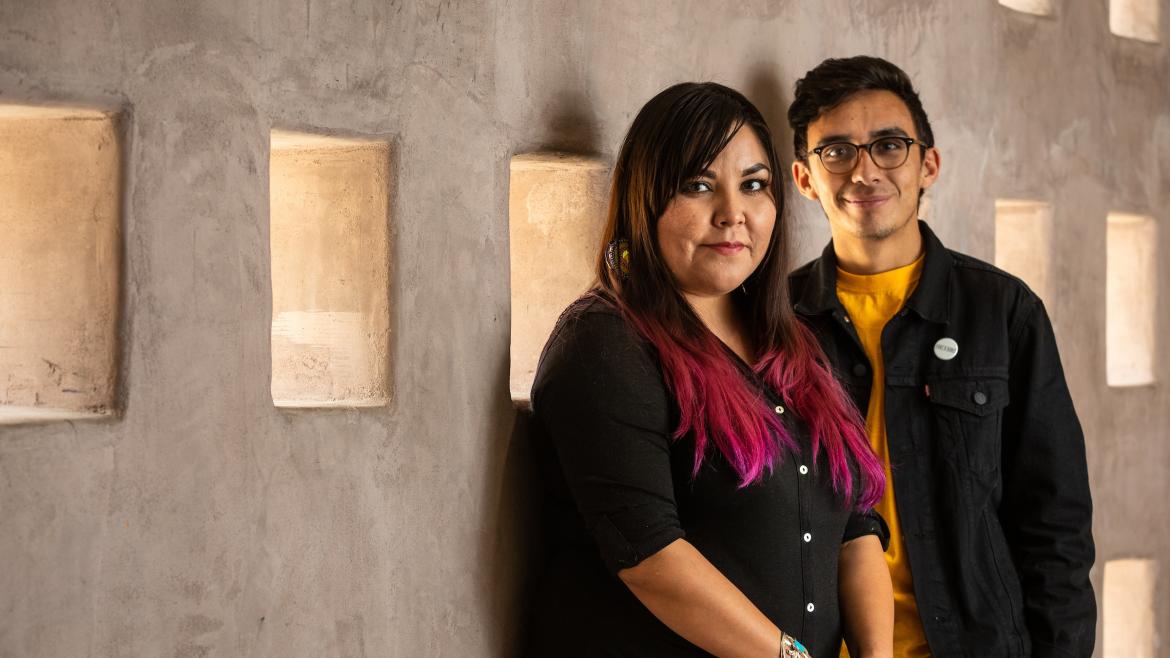 Adding a new perspective to the editor's desk

2 Native American students at the helm of ASU-sponsored publications

Journalism, a profession with few minorities — and even fewer Native Americans — is now starting to see change.

Taylor Notah, a graduate of the Walter Cronkite School of Journalism and Mass Communication, and Joseph Perez, a journalism sophomore at Cronkite, are editors of two Arizona State University-sponsored publications this semester.

Both come from indigenous backgrounds.

Notah hails from the Navajo Nation and is the current editor of Turning Points, a first-of-its-kind magazine geared specifically for Native American students written by an all indigenous staff.

Perez is a member of the Quinalt tribe from northwestern Washington and is a community editor for The State Press, which was founded in 1906.

Both love telling stories. And both have their own stories to tell.

ASU Now spoke with Notah and Perez about their struggles in the newsroom, overcoming the cultural challenges of the job and how they picked up leadership skills along the way.

Question: Historically it’s been tough getting minorities into the newsroom, despite initiatives and efforts from schools, universities and newspapers from across the country. What was it like for you at the Cronkite School being the only Native American in the classroom?

Taylor Notah: It was challenging but I loved gaining the experience. Knowing to go out and report, learning how to shoot video, things like that. Gaining those skill sets was fun for me. I think being in the newsroom was a challenge because I was the only Native American in Cronkite News, and I didn’t see myself amid all of these young budding professionals who had these really great stories and great backgrounds. In the beginning I felt disconnected with my peers and I didn’t see myself among them.

Joseph Perez: Sitting in a room full of talented journalists every day is intimidating for me, no matter my lineage or theirs. However, when I do take the time to notice, as I often do, that I am typically the only Native American in that room full of talent, the intimidation I feel is magnified greatly. It’s never comforting to be the only person of your kind — whatever that "kind" may be — and even less comforting during these vastly important years in college, where we’re all doing our best to find ourselves, to define who we’ll be in the world. That’s why I did my best to cover Native American affairs as a reporter, to talk to more indigenous students, to incorporate the culture into my work and ultimately to serve as a voice for a people that I think isn’t loud enough in the media today.

Q: Were there any cultural hurdles you had to get over because of the nature of the profession?

TN: I grew up very shy, and so approaching people was the biggest hurdle. On the Navajo Nation, we often tease each other for being shy, and being off of the Navajo Nation being shy is something different. It’s something I still encounter and struggle with when I initially reach out to people even though I love connecting with people to hear their stories. I think a cultural disconnect can be the person I’m interviewing may not understand where I come from. Being in the newsroom you’re being put under the spotlight because they want to hear your stories and they want to hear your ideas. It was very jarring and in the beginning, it was a completely different experience for me.

JP: It was a bit difficult for me to come out of my shell at first, but the newsroom I work in has been beyond accepting of my indigenous roots, and they’ve even encouraged me to use that piece of me and share it with our readership. I have had the best mentors at the State Press that have taught me that who I am and where I come from gives me something worth writing about, not something to overcome. They’ve shown me that my Native American identity is a leg up rather than a hurdle to climb over.

Q: So what made you ultimately stick with journalism?

TN: Because I had story ideas: No one in the newsroom knew what was going on in the community that I came from. My first story for Cronkite was about language revitalization among the Navajo Nation … I would hear from back home the language was declining at a very fast rate. I wanted to report on that because stories about Native Americans aren’t always negative. Yes, our language is declining but there are so many amazing things that are happening by our people who are trying to make the language come back. So I wanted to show that … and that stems from the mission in my work to show the beauty and the resilience and the strengths that Native Americans have. What people in mainstream media always see are stereotypes and misconceptions, and I wanted to turn that around.

JP: Journalism is what I love. I’ve been a writer for a good chunk of my life, and finding this niche where I can write, but write something worth reading is all I could ever ask for. I’ve never once doubted whether this is what I want to do, and the fact that I can do this incredibly important job while offering a voice to my people is a dream come true.

Q: Any major turning point for you?

TN: We did this intermediate reporting class, taught by Maureen West. I actually took that class two times. The first time I tried reporting how I thought they wanted me to report — I’d go to these council meetings in Mesa or cover an event, and I didn’t really connect with it. I just bombed because I was trying to step into a world where I didn’t feel connected. So I retook the class with Maureen West and she really pushed and encouraged me. She told me that I had good story ideas and that I should pursue them. So I began seeking stories in Native communities where I felt comfortable reporting. I first got published through the Gila River Indian Community, and the editor said they had a story I could write. I had to have six stories to pass the class. So with GRIC, they realized that both of us are helping each other if we tell our stories together.

JP: A major turning point in my journalistic endeavors was when I began writing for the State Press. I had a job doing what I loved, and I felt like a shark that had smelled blood. I got a taste for reporting as a job, and walking into that newsroom every Thursday night only assured me that this is what I was meant to do. I believe that everybody has a purpose, and as soon as I started writing for this student-run publication, I knew that I had found mine. Writing and now editing for the State Press has made me sure that there’s nothing else in the world I’d rather do than this.

Q: How did the opportunity come up for your current position?

TN: I was on the Navajo reservation one summer and I got an email from Rebecca Blatt, my director at Cronkite News, who mentioned a possible podcast opportunity. She connected me with Dr. Amanda Tachine at the Center for Indian Education who was looking for someone to do a podcast, and I had experience in that from Cronkite. So we connected and I found out about “Turning Points,” and heard they needed someone to finish a few stories. That was my reconnection to Native communities and stories on campus. That’s where it all came back for me and where I find myself now. I’m honored with all of these connections that brought me to my current path now.

JP: This past fall was my second semester writing for the State Press and I had decided to take on a full-time reporting position. It was arduous. I had a really hard time, but I was always proud of the work I did, and it seemed that my editors were as well. It came up in conversation with my editors and leadership that editor applications were opening and I decided I would apply. Friends of mine told me that I’d undoubtedly get the job, but I was extremely nervous to apply nonetheless. Of course, I filled out an application the very day they were open and interviewed for the spot on the very first day I was available to do so. Needless to say, I got the position and I couldn’t be happier with where I am.

Q: Why do you think that historically many young Native Americans have not pursued a career in journalism? And how can this trend be reversed?

TN: Maybe it’s because they don’t see themselves in this role. I certainly didn’t. All of my other friends pursued other careers and I was the only one in my group who gravitated toward the Cronkite program.

To reverse this, I would say we come from a long line of strong indigenous people and that we can do it. We may be in places that weren’t originally designed for us, but if we think of the need of our community and family, we can achieve anything. That’s where our strength comes from. We face so many obstacles, but in the end we have the teachings from our culture to persist and keep going.

JP: I think it’s hard for Native Americans to pursue a career in journalism because we already feel so underrepresented. Journalism has been a white man’s business for so long and I think it’s hard for any minority to go out on a limb and try to make something of themselves in a field where almost nobody shares their ethnic roots. It’s intimidating. That’s not to say that Native Americans aren’t bold or brave, because that’s so far from the truth. It’s to say how intensely horrifying it is to be the only indigenous person in any field, especially one as important and daunting as the journalistic field. A lack of representation can be a huge hurdle to overcome, and I think it’s a vicious cycle: Natives don’t pursue careers in journalism because there are no Natives in journalism.

I also think that we need to see how important it is that our voice is heard. Without Native American journalists, our voice will never be heard and I think that we, as a people, need to recognize our duty to ourselves to make sure that we are heard — and heard loud and clear.

Top photo: Taylor Notah (left) and Joseph Perez are Native Americans and editors of two Arizona State University-sponsored publications this semester. Notah graduated from Cronkite School of Journalism and Mass Communication and is the senior editor at "Turning Points, A Guide to Native Student Success." Perez is a sophomore at Cronkite and is the community editor at "The State Press." Photo by Charlie Leight/ASU Now

#8 @SunDevilWGolf Improves By 17 Shots on Day 2 in SoCal

#8 @SunDevilWGolf Improves By 17 Shots on Day 2 in SoCal The Sun Devils tee off at 9:30 am MT on Tuesday for round 3 at Northrop Grumman.