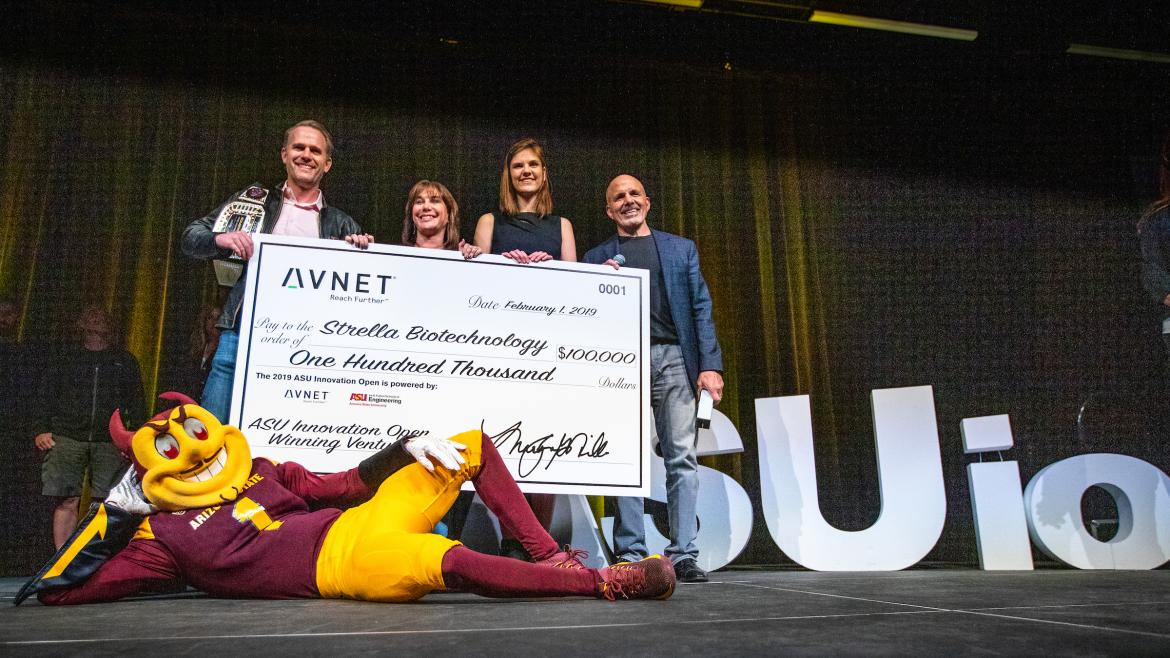 Katherine Sizov wanted to save the apples. So she invented a device to detect exactly when they’re ripe and ready to be sold — a technology that could save millions of apples from spoilage every year.

On Friday, she won $100,000 for her invention in the ASU Innovation Open pitch competition at Arizona State University.

Sizov is founder and CEO of Strella Biotech and also a senior majoring in molecular biology and chemistry at the University of Pennsylvania. Her invention is a biosensor that’s placed on the walls of the warehouse rooms where apples are stored, where it detects levels of ethylene gas, produced as the fruit ripens. The sensors are already being used by apple-packing companies, and Sizov said the $100,000 prize, which was donated by Avnet, will allow her team to make more of the devices.

“I like making tech that’s hands-on, and I think that’s the future of the world,” said Sizov, who also won $10,000 in services donated by Roambotics.

“Nature is smarter than us, and we can learn from it to do all sorts of awesome things.” Kyle Squires (left), dean of the Ira A. Fulton Schools of Engineering, and Avnet CEO Bill Amelio welcome everyone to the third annual ASU Innovation Open Final Demo Day on Friday at the Student Pavilion. Photo by Charlie Leight/ASU Now

Strella Biotech was one of five teams in the final round of the ASU Innovation Open. They each won a $5,000 cash prize in the first round last fall from Zero Mass Water, one of the event sponsors and an ASU spinoff founded in 2015 by Cody Friesen, an associate professor in the Ira A. Fulton Schools of Engineering.

The other four finalists were:

• Soundskrit, which won second place and a $25,000 cash prize donated by ON Semiconductor. The company, founded by Sahil Gupta of McGill University, created a new kind of multidirectional microphone, which Gupta hopes to eventually sell to Apple for use in iPhones.

“Smartphones have evolved, but microphones haven’t,” Gupta told the judges. “The challenge is in shrinking the microphone, which decreases audio quality.

“But with a single microphone, we can listen in any direction without compromising on size, audio quality or direction.”

• Infinite Cooling, a water-capture technology invented by a team of undergraduates at the Massachusetts Institute of Technology. CEO Maher Damak told the judges that their system, which has been installed on the MIT campus, could save power plants more than a million dollars a year and help them use less water. The team met last week with administrators at Palo Verde Nuclear Power Plant to discuss the technology.

• SoleMate Solutions, invented by students Surabhi Kalyan and Kristine Khieu from the University of California, San Diego. They created a shoe insole for people who are rehabilitating after orthopedic surgery. The medical device, which measures weight applied and provides real-time feedback, will undergo clinical trials this year. The goal is for the device to reduce recovery time and prevent complications.

• Cloud Agronomics, a remote-sensing technology created by students at Brown University that’s intended to reduce food waste by better predicting crop diseases. Their algorithm measures the light refracted from crops captured on ultrahigh-resolution images taken from planes to detect crop diseases long before the human eye can see them.

“The vision is for farmers to not wake up one morning and realize they lost their crops to a disease they can’t see but our sensors can,” said Jack Roswell, a mechanical engineering major at Brown and co-founder of the company.

This was the third ASU Innovation Open, and the first in which no teams from ASU made it to the finals.

“That feels like it’s negative, but it’s actually positive because it’s evidence of where this competition is headed,” Friesen said. “We had a crazy level of competition this year.” Sizov said she was inspired to invent the ethylene-detection device when she heard that two out of every five apples harvested are wasted due to spoilage, which mostly happens during packing and distribution.

“Fruit is stored for a long period of time. The apples you buy at grocery store this week could be over a year old,” she said in her pitch to the judges.

Strella Biotech tested its devices with an apple packer in Washington state. On Jan. 5, the sensors detected an ethylene spike in one of the storage rooms. 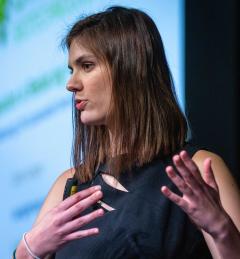 “We told the client, ‘You should pull the fruit now.’ They were planning on pulling those apples in July,” she said. “We saved 4 million apples, which is really exciting.”

“With food waste, there’s no silver bullet. It’s imperfect produce that’s thrown out, or spoilage on the way to the store or food left on your plate,” he said. “It’s day zero in this space.”

Other ASU Innovation Open sponsors include the Ira A. Fulton Schools of Engineering and the Arizona Board of Regents, with additional support from the ASU Entrepreneurship + Innovation program and the ASU Office of Knowledge Enterprise Development.

“The Phoenix metropolitan area is quickly becoming a technology and entrepreneurship hub, and at the Fulton Schools, we’re excited to be one of the catalysts of this wave of innovation and creativity,” said Kyle Squires, dean of the Fulton Schools.

“Through the ASU Innovation Open, we’re bolstering new ideas from ventures like Strella Biotech and the other competitors who are all on course to become the technology leaders of tomorrow.”

Top photo: Katherine Sizov (second from right) of the University of Pennsylvania poses with (from left) judge Cody Friesen and Avnet's MaryAnn Miller and Bill Amelio as well as Sparky after being named the grand-prize winner at the third annual ASU Innovation Open Final Demo Day on Friday at the Student Pavilion in Tempe. Photo by Charlie Leight/ASU Now

Crowds of curious children and their families got a chance to peek into Arizona State University's learning spaces on Saturday at the first of four free open houses this month. The Polytechnic campus kicked off this year's Open Door with scores of intriguing activities, including an interactive look at thermal imaging cameras, a tour of its robotics labs, turns in the flight simulator, paper ro... ASU's campuses are spending February opening their doors to the community, and Poly got things started Saturday

Crowds of curious children and their families got a chance to peek into Arizona State University's learning spaces on Saturday at the first of four free open houses this month.

The Polytechnic campus kicked off this year's Open Door with scores of intriguing activities, including an interactive look at thermal imaging cameras, a tour of its robotics labs, turns in the flight simulator, paper rocket launches and, of course, Sparky. Doctoral student Sunny Amatya demonstrates a soft elbow assistant exoskeleton in the robotics lab during Open Door on Feb. 2 at the Polytechnic campus. 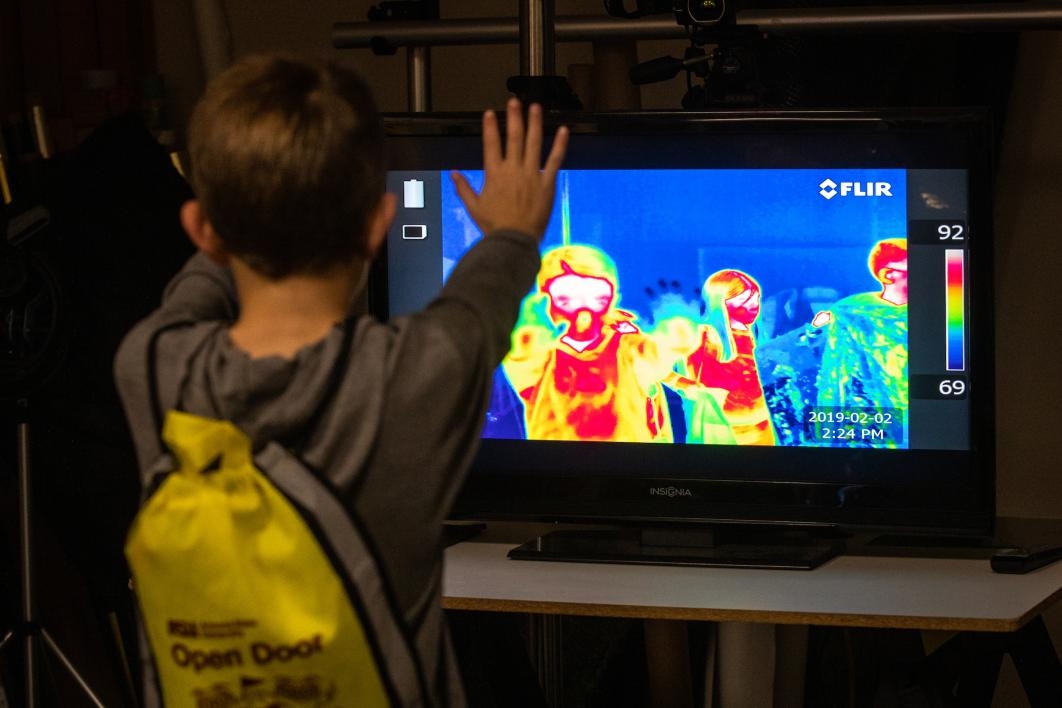 A young visitor has fun with the thermal imaging camera in the photo studio at the Polytechnic campus. 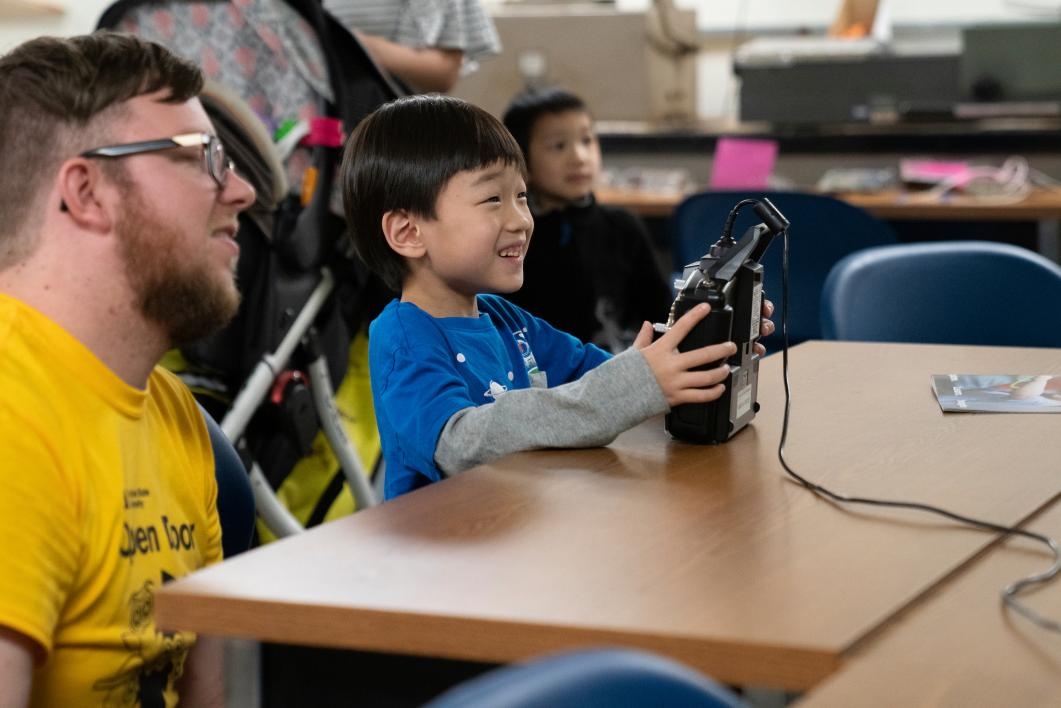 Luke tests out a flight simulator in the Simulator Building at ASU Open Door. 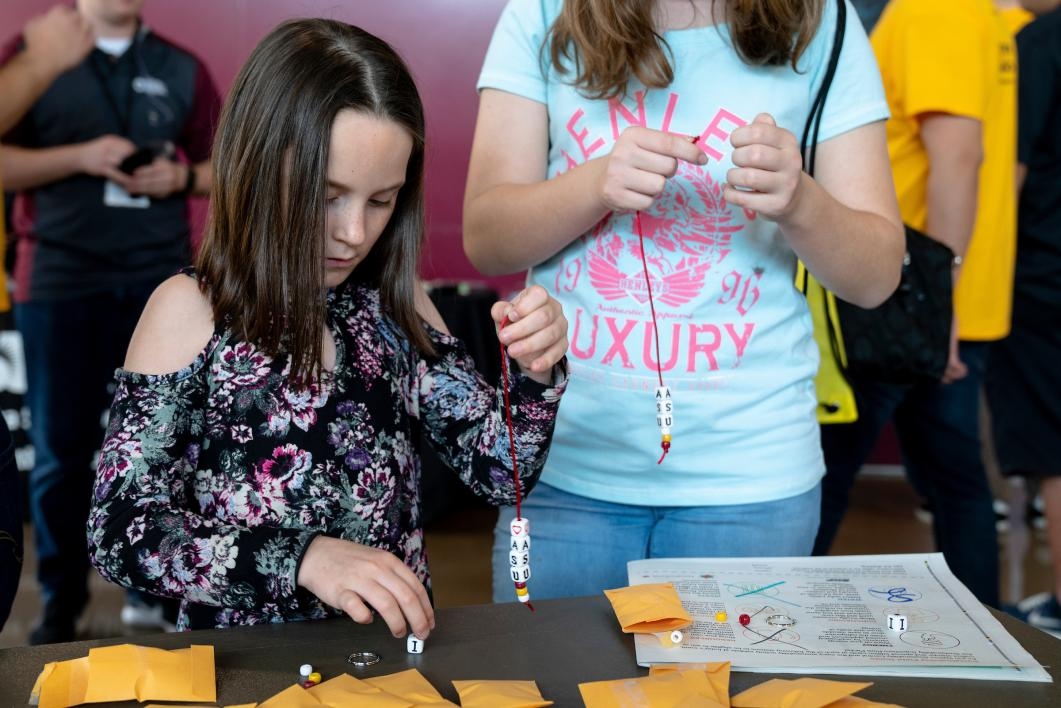 Makenna Rowles makes a keychain at the ASU Polytechnic Open Door. Open Door gives the community the opportunity to interact with the programs and initiatives at ASU, and score some Sun Devil swag. 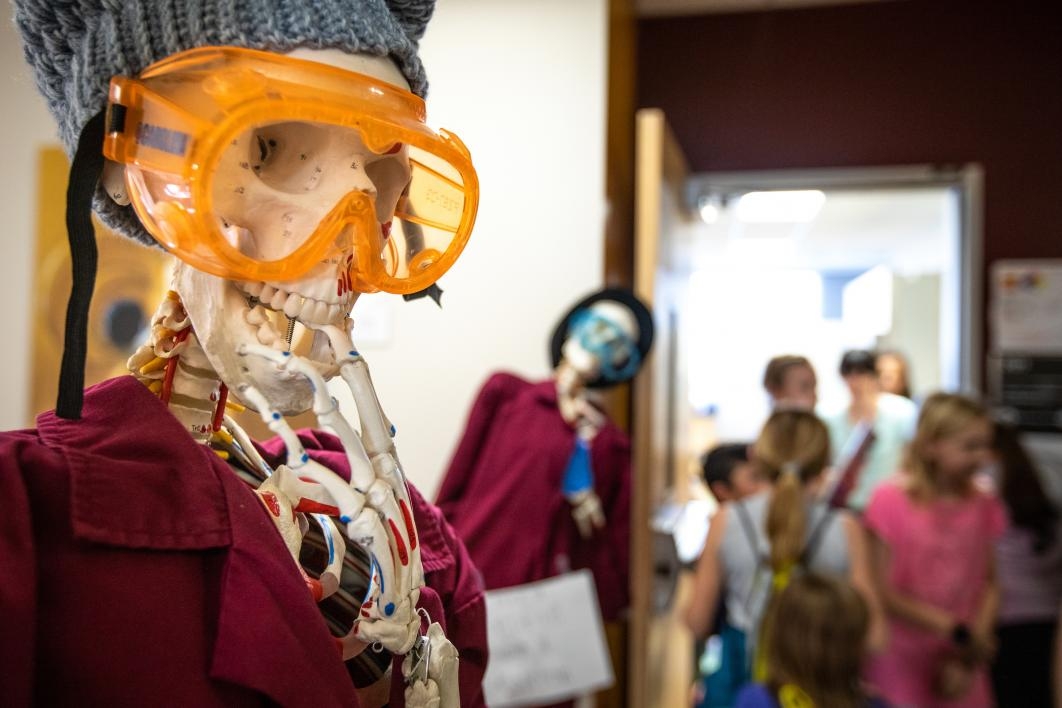 Well-dressed skeletons pointed visitors to interactive learning experiences and activities during Open Door on the Polytechnic campus on Saturday. 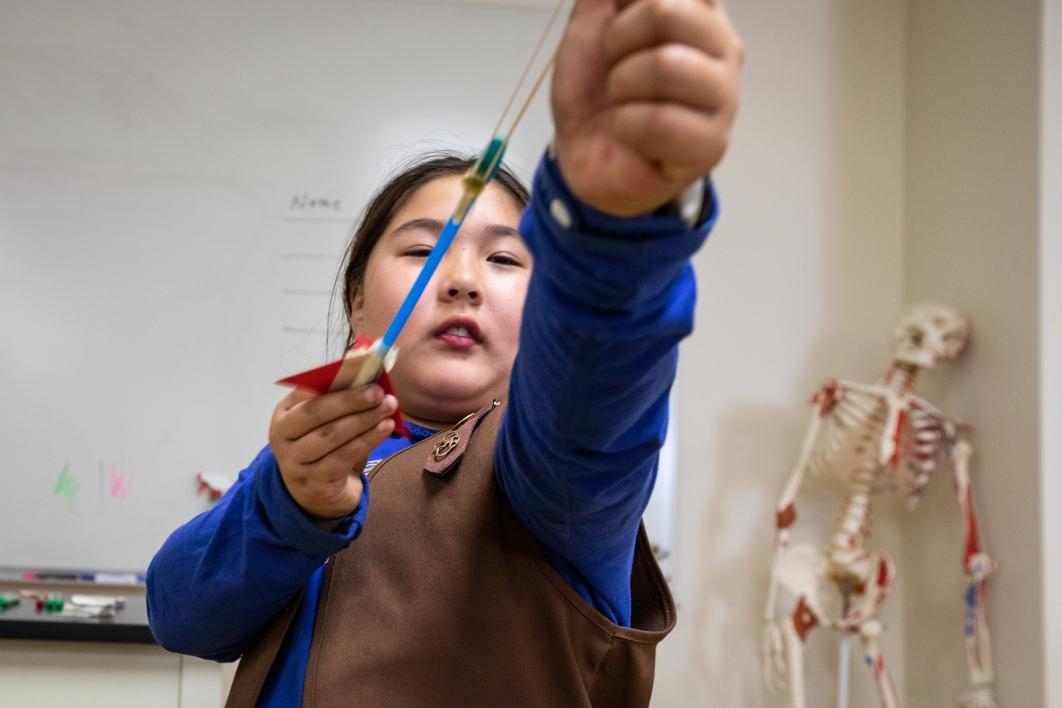 Eight-year-old Kailani Rue, of Gilbert, takes aim with her just-made slingshot rocket. Want to see how it turned out? See the next photo. 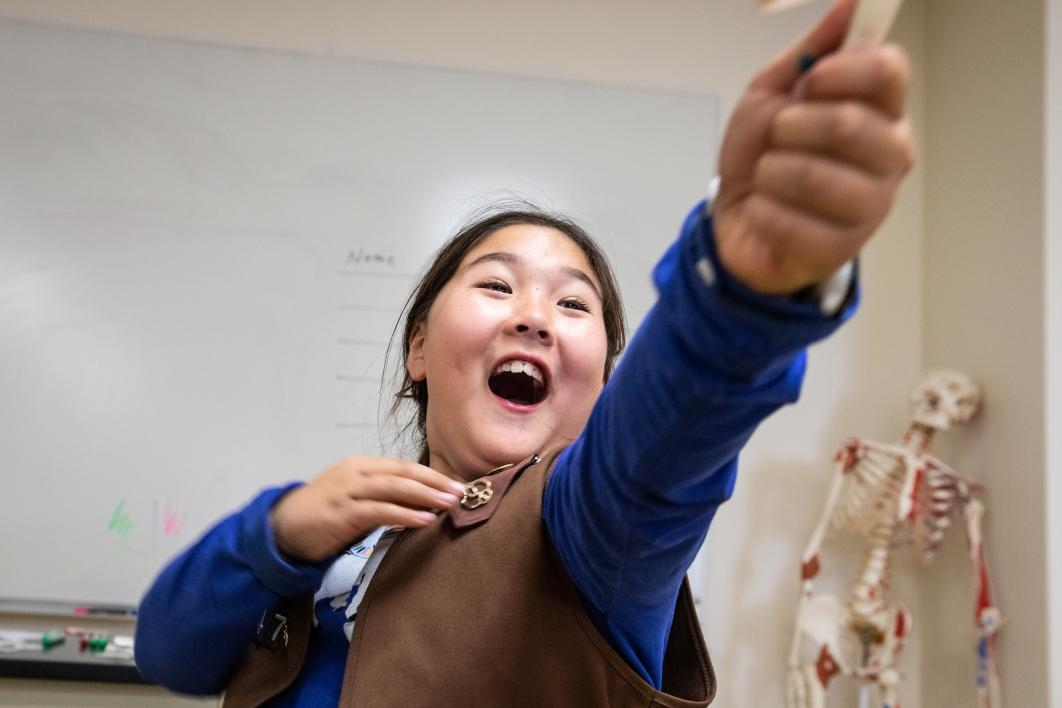 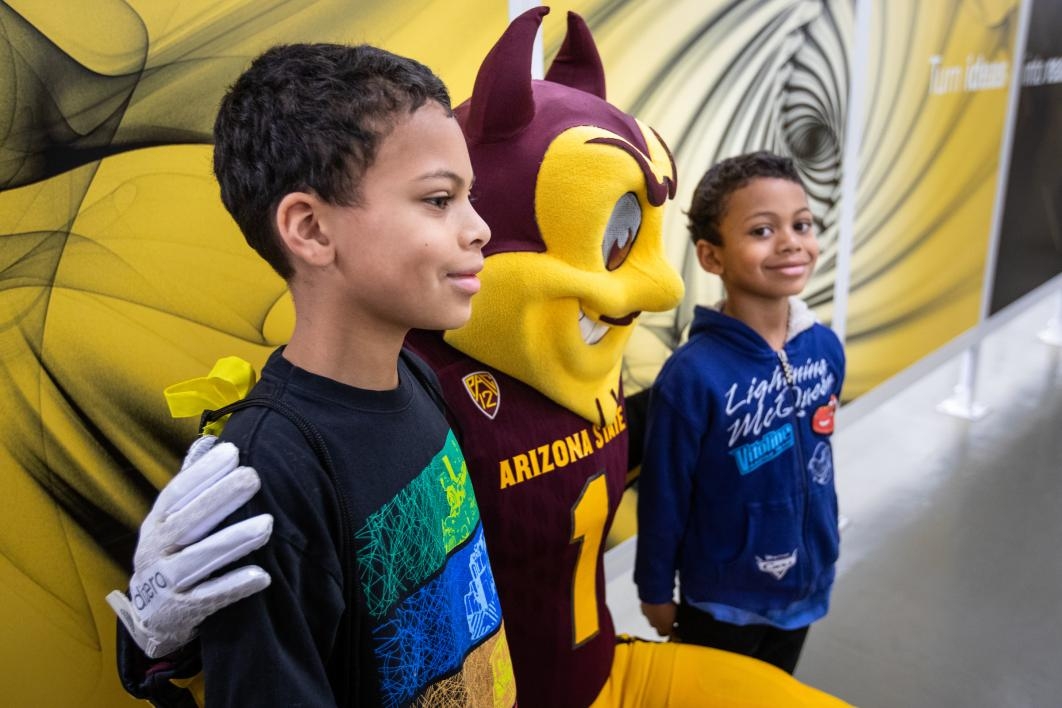 Sparky poses for a photo with brothers Elan, 8, and Xavi Robles, 5, of Gilbert, at ASU Open Door. 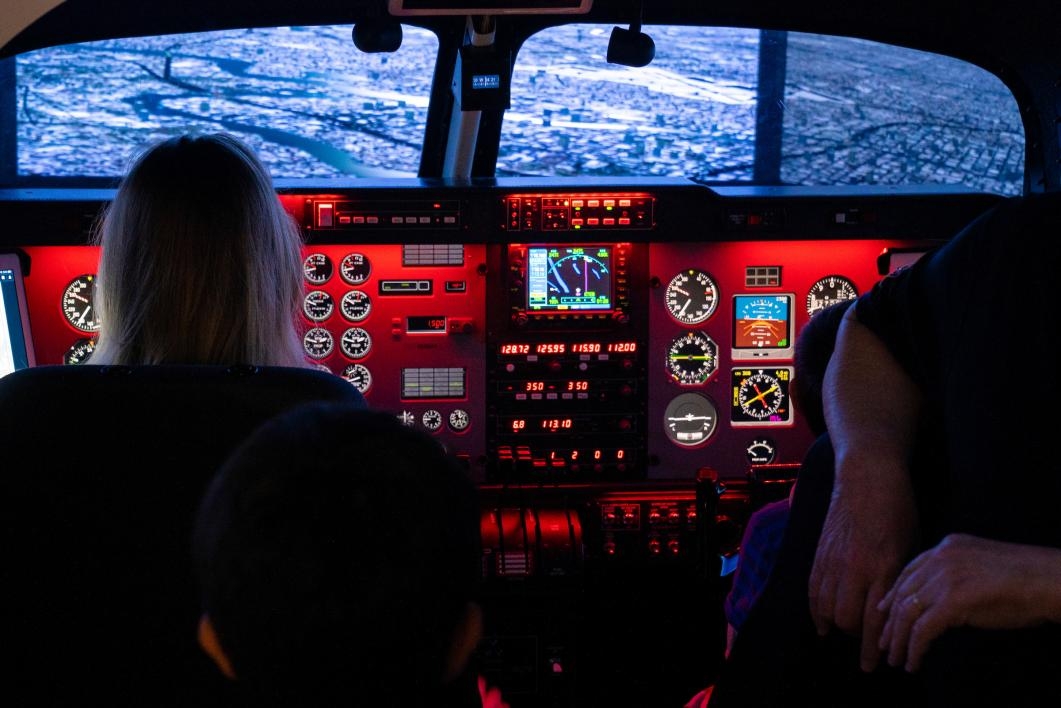 The flight simulator building was a very popular place to explore. Guests were able to take a firsthand look at how ASU trains pilots. 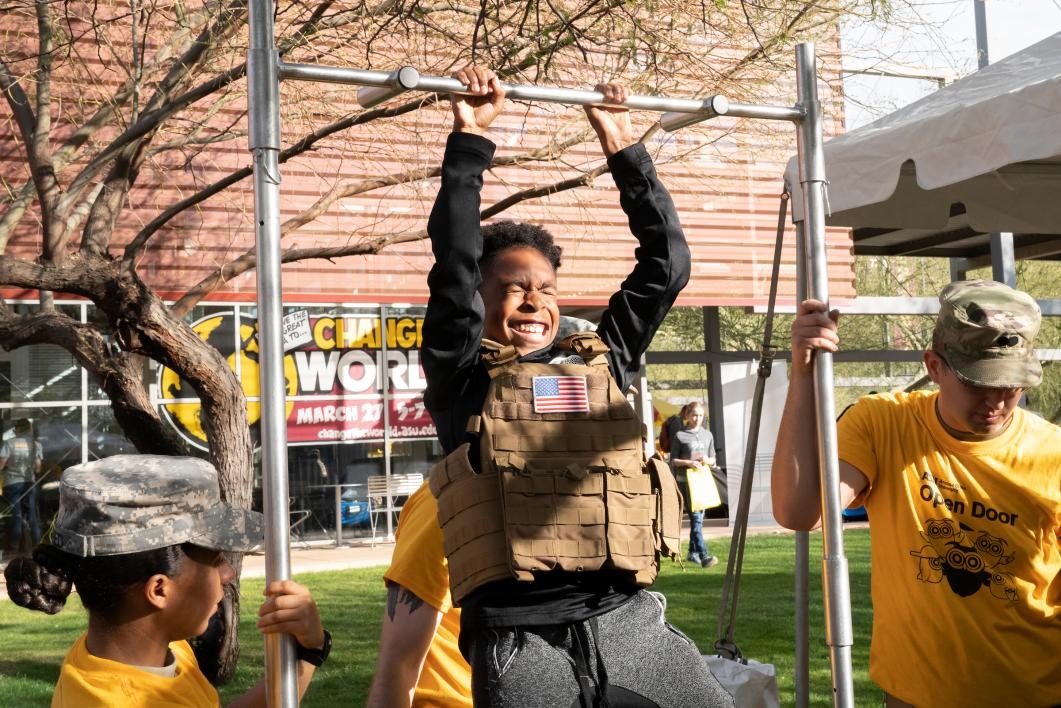 Kelby Clark does pull-ups at the ASU Polytechnic Open Door. Members of the Army ROTC were at the event promoting physical fitness and sharing info about their program. 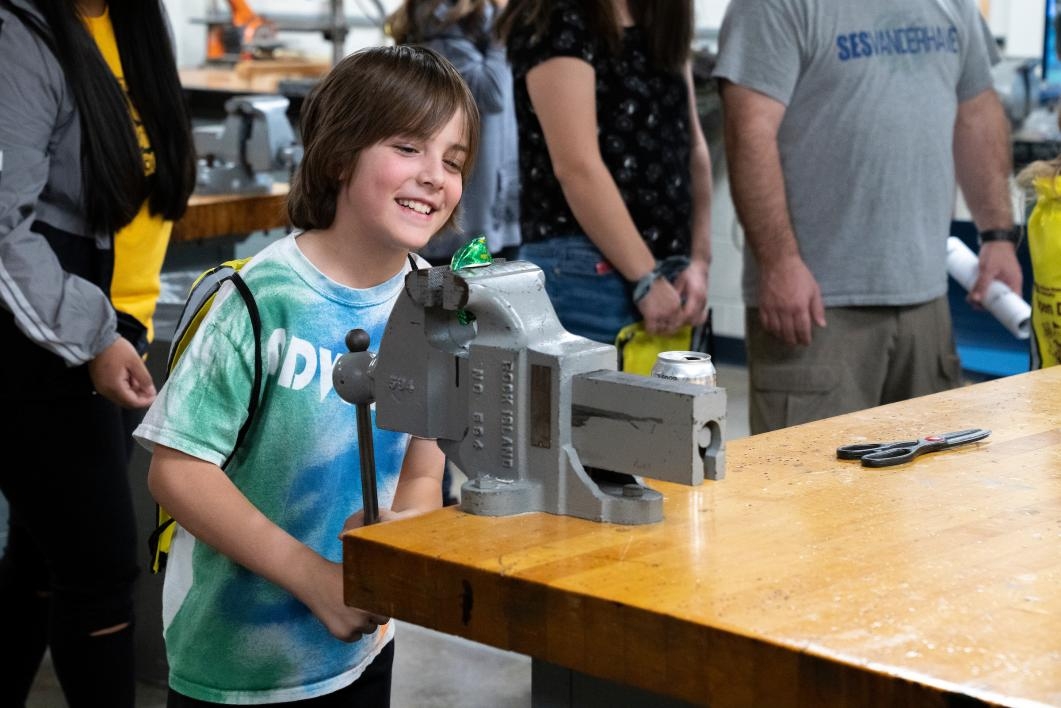 Ezra got a kick out of crushing a can in a vice in one of the shops at the Polytechnic campus. 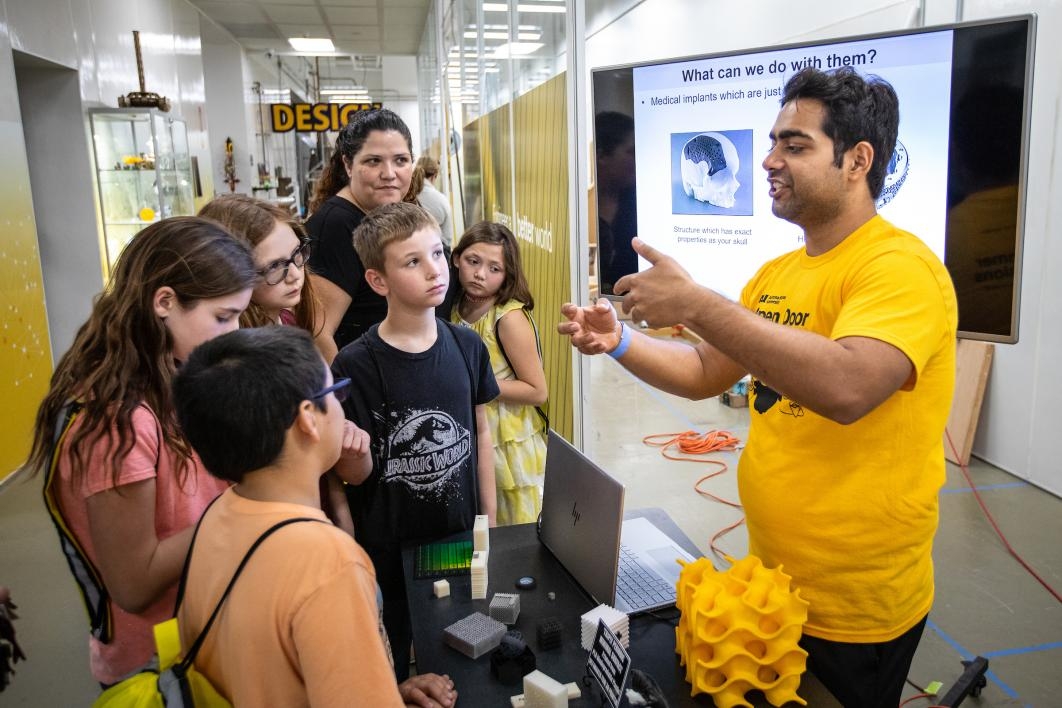 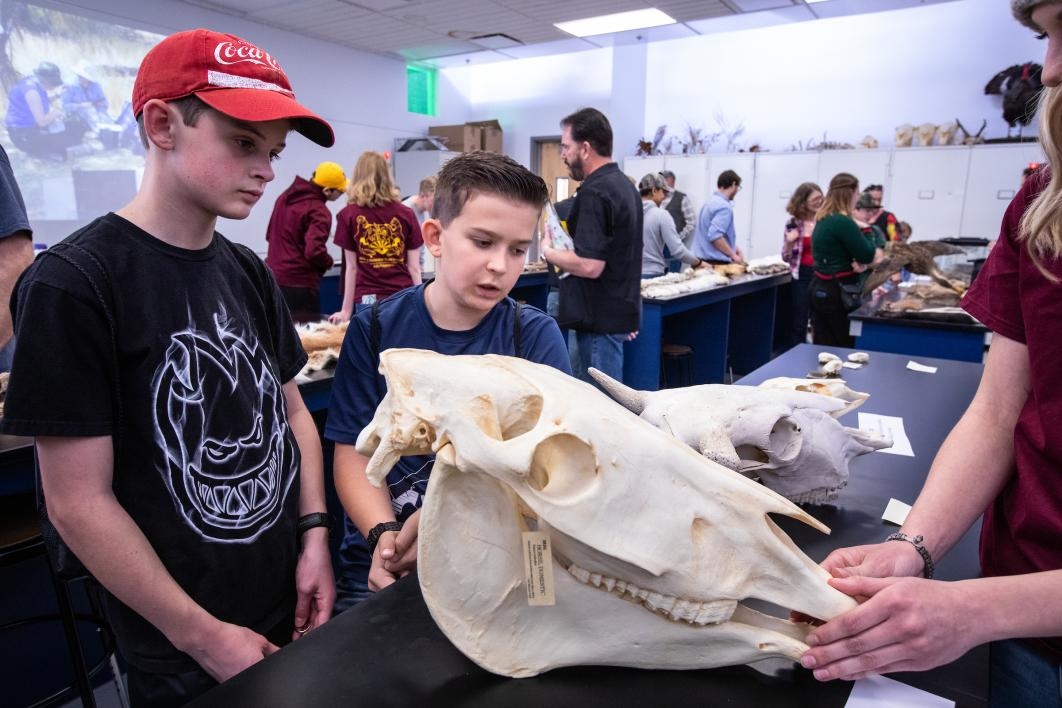 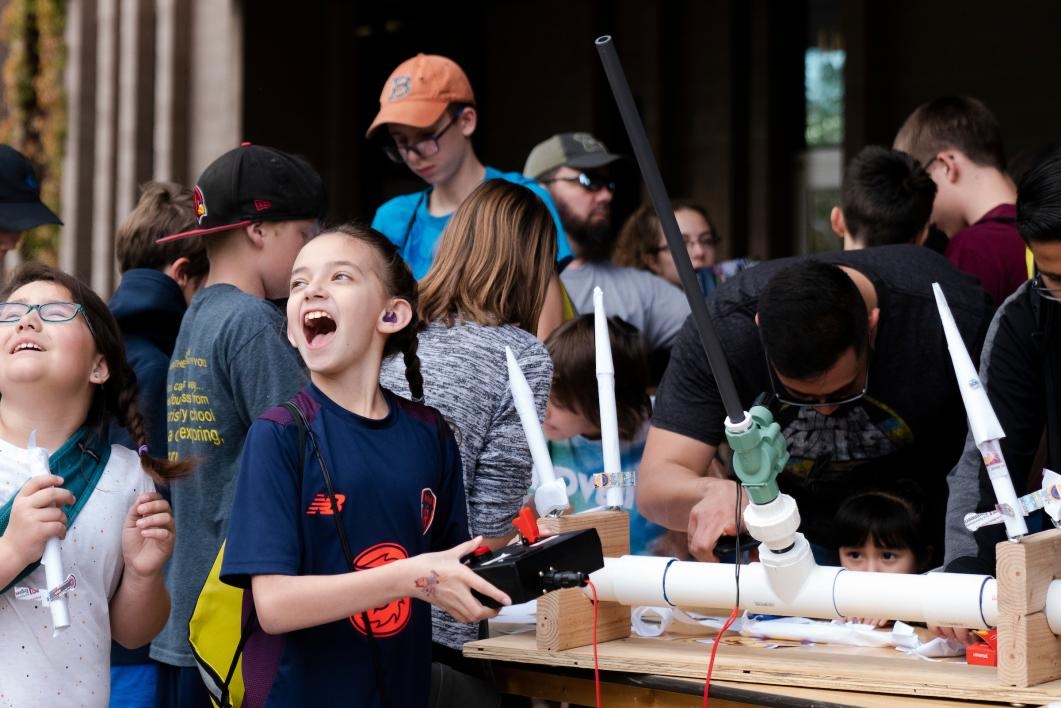 The paper rockets launch activity was one of the more popular on Saturday. Visitor Haley definitely enjoyed her launch. 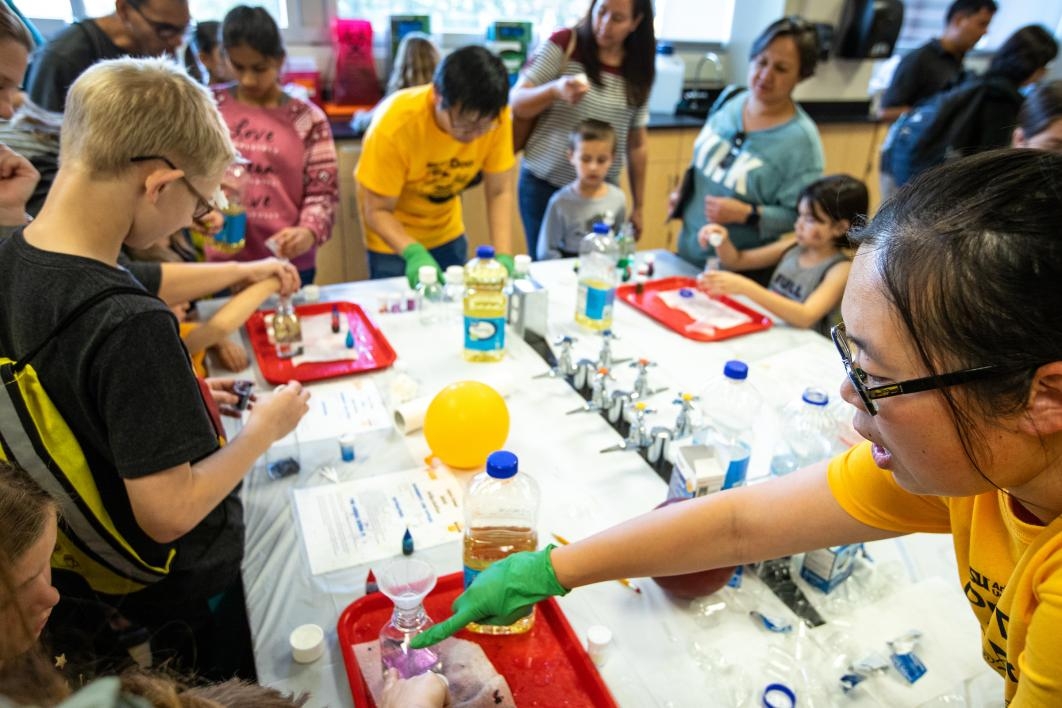 The Fun with Chemistry activity showed visitors how to make their own lava lamp.

If you missed the fun, don't worry: There are three more free Open Door events:

Read more about what's in store at each campus here, including information on the free app that can help visitors map out the activities they want to visit. Get free tickets in advance online.

Top photo: Eight-month-old Leo Long could someday pursue a career in space in rockets designed by his parents, both postdoctoral researchers in mechanical engineering at ASU. For now, they'll go with the astronaut photo op at ASU Open Door on Feb. 2. Photo by Charlie Leight/ASU Now