In his human development theory, the late psychoanalyst Erik Erikson called the seventh of eight life stages the generativity phase, a term he coined to describe the drive to impact society and future generations. For Linda Luecken, a professor in the Department of Psychology at Arizona State University, it’s also the way she sees her role as a mentor.

Since joining ASU in 2000, Luecken has ushered more than 15 doctoral students through the clinical program. Last year, those mentorship responsibilities expanded to faculty when she joined the College of Liberal Arts and Sciences. 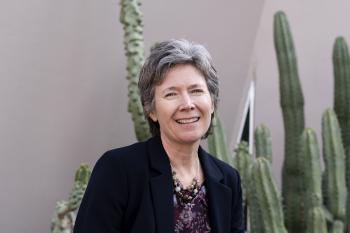 “Linda Luecken has extensive clinical research experience to help students navigate their own doctoral tracks, and the energy she brings to that role has been a vital guiding force for students at the graduate level for almost 20 years,” said Patrick Kenney, dean of the College of Liberal Arts and Sciences. “We were particularly proud to welcome her into a similar mentorship position as associate dean of faculty for our college.”

This January, Luecken will be honored with an Outstanding Doctoral Mentor Award from the ASU Graduate College Mentoring Network. She was nominated last November by four students currently working toward doctorates in her Health and Coping lab.

“We have all had really positive experiences under Linda’s mentorship,” said Jennifer Somers, a doctoral student in her fourth year. “So we were all very much on the same page about her nomination.”

Located in the Department of Psychology, research in Luecken’s Health and Coping lab examines how developmental, cultural and cognitive factors impact the mental and physical health of children and families. Luecken’s mainstay project, Las Nuevas Madres, follows 322 low-income, Mexican-American women recruited during their pregnancies from neonatal clinics across Maricopa County in 2008. She and fellow investigators, Department of Psychology Foundation Professors Nancy Gonzales and Keith Crnic and, most recently, Associate Professor of psychology Marisol Perez, have spent over a decade examining biological and environmental factors in both mother and child spanning obesity, postpartum depression and behavioral health.

The expansive project has garnered over $10 million in grants from the National Institutes for Health and published 19 research papers since its inception. Over a dozen graduate students and hundreds of undergraduate research assistants have gained valuable research experience on the project.

That was the case with Somers, who conducted a study last year looking at how certain biological traits affect babies’ reactions to postpartum depression symptoms in their mothers.

“In parenting, we sometimes talk about leading from behind, and that also kind of describes Linda’s mentorship style,” Somers said. “I was able to craft a niche for myself, while still being scaffolded by her experience.”

Las Madres Nuevas is unique not only for its longevity, but also because of the community it focuses on. As Luecken explains, low-income and ethnic-minority women are disproportionately affected by postpartum depression, but the reasons are understudied. Mariam Hanna Ibrahim is a fifth-year doctoral candidate whose dissertation focuses on Middle Eastern and North African communities, a similarly underrepresented group. She says Luecken’s commitment to filling those research gaps has inspired her to do the same.

“As a minority student, the goal of working in an academic-medical institution at times seemed unreachable,” she said. “Dr. Luecken's consistent support and encouragement has made it a feasible goal.”

“Linda is a mentor who absolutely cares about my development as both a clinical psychologist and also as a person,” said Sarah Curci, a second-year graduate student and Luecken’s latest mentee. “She has done a great job of knowing when to help guide me and when to let me figure things out on my own.”

Luecken says the work, like anything else, is a learning process.

“Mentoring is one of the things I love about the job,” she said. “But it’s about investing time into thinking through what each student is looking for, and matching what they bring to the table with what you can offer.”

Jenna Gress-Smith arrived as a doctoral student when the Las Madres Nuevas project was in its infancy in 2007. She says Luecken helped her juggle two pregnancies during the seven years she spent at ASU. Now leading research, treating patients and managing a staff of psychologists as acting chief of health psychology at the VA Hospital in Phoenix, she still draws on Luecken’s lessons.

“There are so many nuances to being a woman in leadership that I haven’t really experienced before,” she said. “I benefited both from Linda’s mentorship itself and by watching her manage funding, navigate difficult project elements and bring together a range of different perspectives for Las Madres Nuevas.”

“Sometimes you get the best ideas from people who are most naive about an area, because they aren’t restricted by what they’ve already been taught about it,” she said. “The mentoring, the teaching and the research — it’s all intimately connected.”

With many fields still dominated by men, Luecken says graduate tracks in science often seem unwelcoming to female students. She sees part of her job as helping women see how they can fit in and contribute to the field.

“If you don’t see your mentor as a strong role model, you’re probably not going to stay in academia, and we risk losing so many women scientists that way,” she said. “I think a large part of the mentor’s role is to show them that this is a great career for women.”

The latest exhibit at ASU Gammage will feature Eric Boos, a digital artist, and Brenna Curry, a metal artist.The exhibit will run from Jan. 29 through Feb. 18 on the walls of ASU Gammage.For more information on the artists, refer to their personal websites:Due to rehearsals, event set-up, performances, special events and holidays, it is advised to call 480-965-6912 or 480-965-0458 to ensure vi...

The latest exhibit at ASU Gammage will feature Eric Boos, a digital artist, and Brenna Curry, a metal artist.

The exhibit will run from Jan. 29 through Feb. 18 on the walls of ASU Gammage. For more information on the artists, refer to their personal websites:

Due to rehearsals, event set-up, performances, special events and holidays, it is advised to call 480-965-6912 or 480-965-0458 to ensure viewing hours, since they are subject to cancellation​ without notice.