Breezing, a spinout company that was the result of discoveries made at Arizona State University’s Biodesign Institute, was recently named an Arizona Innovation Challenge winner by the Arizona Commerce Authority.

The startup, founded by NJ Tao, director of the Biodesign Center for Bioelectronics and Biosensors, and Erica Forzani, a researcher in the center and an associate professor at the Ira A. Fulton Schools of Engineering, has developed a wearable device that offers precise assessments of a person’s resting metabolic rate using sensor technology based on research conducted at Biodesign. Xiaojun Xian and Francis Tsow, ASU researchers who aided in product development, rounded out the development team and were joined in 2018 by CEO Andrew Steele, a two-time previous founder and Silicon Valley veteran. 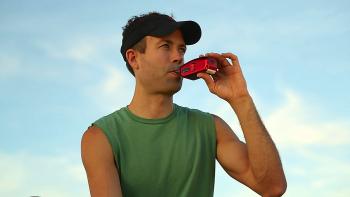 Breezing delivers precise recordings of resting metabolic rates in real time. The next generation of products have been redesigned to be wearable rather than handheld. Image credit: Breezing Download Full Image

Breezing was one of 10 winners, selected from 20 finalists and over 100 applicants for the semiannual competition. Entrants in the competition are “promising early stage technology companies in high growth industries,” according to the Commerce Authority award announcement.

“This product can be a great fit for people who want to achieve a healthy weight scientifically and efficiently,” Tao said. “Obesity has become the greatest population health issue of our time, and our clinical studies have already proven that people lose more weight and adhere to healthier behavior when they have a clear picture of their metabolic data using Breezing.”

“Breezing is a wonderful example of a Biodesign scientist moving a discovery from the lab into the world,” said Joshua LaBaer, executive director of the Biodesign Institute. “This type of impactful technology thrives in the boundary-breaking approach that we encourage at Biodesign.”

Biological and electrical engineers, physicists, chemists, biochemists, materials science researchers and their students were all involved in Breezing’s research and development.

Winners of the Arizona Innovation Challenge receive up to $150,000 in grant funding to invest in their company’s growth. The prize money is released in stages based on reaching key milestones. Annually, the Commerce Authority distributes a total of $3 million in grants.

“I think it’s a great program,” Tao said. “It’s a great opportunity for networking, getting to know the community and investors.”

Each prize-winning startup is paired with an experienced entrepreneur-in-residence through the ACA’s Venture Ready mentorship program. The entrepreneurs-in-residence work with the companies for up to a year to guide them toward success before the companies can “graduate” from the program and earn full funding.

“The Innovation Challenge is a good vehicle for companies to get advice, exposure and capital at a level that would be difficult to get otherwise,” Steele said. “Together, those things made the program really valuable for us.”

Breezing is a consumer-friendly technology. It is the only metabolism tracker on the market today that provides users with the opportunity to view their data in real time on a mobile app. It relies on a precise technology for measuring metabolic rates, called indirect calorimetry. The technology measures a user’s resting metabolism with a simple 10-minute test, during which the user breathes normally while wearing the device over their mouth and nose. It is smaller than other metabolism trackers.

“Whether someone is in a structured weight loss program or is an elite athlete seeking to optimize performance, the Breezing technology provides precise, actionable metabolic data to help customize nutrition, lifestyle and exercise plans to achieve their specific goals,” Steele said.

The sensor technology is a chip that is the real genius behind the device. Tao and Forzani’s research team spent years shrinking and perfecting the chip. It works by sensing chemicals in the air and in human breath, while simultaneously measuring oxygen consumed and CO2 dispelled to give users personalized results.

“We got excellent feedback on our product from our customers,” Tao said. “Our first generation of products sold out. Now, our second generation of machines is designed to be even easier to use and compatible with more mobile devices.”

The next generation of Breezing devices has been redesigned based on the user feedback and field data collected from its first generation device launched in 2013. Breezing says it plans a public announcement of its new product later in the first quarter of this year, with subsequent product availability currently slated for the second quarter.