Why we do what we do

Why does your co-worker drive a flashy car? Why do people make art? Are there any common threads in what makes people fall in love or feel happiness?

For over 40 years, Arizona State University’s Douglas Kenrick has sought answers to such questions about human behavior. Kenrick, who was recently named a President’s Professor of psychology, combines research strategies from evolutionary biology, anthropology and psychology to study what motivates social behaviors in people. 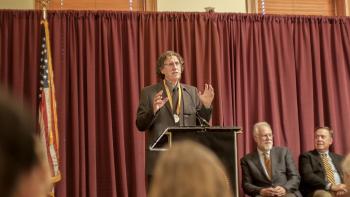 For over 40 years, Arizona State University’s Douglas Kenrick has sought answers to such questions about human behavior. Kenrick, who was recently named a President’s Professor of psychology, combines research strategies from evolutionary biology, anthropology and psychology to study what motivates social behaviors in people. Download Full Image

The President’s Professorship acknowledges faculty who have mastered the subject matter of their field and who innovatively pass on their expertise to students through teaching and mentoring. The first undergraduate class Kenrick taught at ASU, back in 1973, had 475 students, and although he was initially petrified at the prospect, he said he came to love teaching in big lecture halls full of students.

“Once I got them to laugh, I thought it was fabulous,” he said.

When asked what he was most proud of in his career so far, Kenrick said his students’ success. Steven Neuberg, Foundation Professor of psychology and department chair, was not surprised by this answer.

“Professor Kenrick is an elite educator," Neuberg said. "He masterfully engages students at all levels, intriguing them with mysteries of social behavior, guiding them to the solutions to these mysteries and relating findings and theories to students’ everyday lives. He is successful teaching in the large lecture hall, in the small seminar room, in the one-on-one of honors mentoring and in the research lab.

"He has inspired generations of students to become scholars and award-winning teachers in their own right. And he has been doing all this — consistently — for 40-some years, all while being a renowned and productive scholar, responsible for seminal research findings and shaping the direction of his field. Simply put, Professor Kenrick is an exemplar of the New American University and well worthy of being an ASU President’s Professor.”

Kenrick is also proud of his research, which has so far produced more than 200 publications and has been cited by other researchers over 21,000 times.

One of Kenrick’s favorite research projects is the revamping of a decades-old and very influential psychological idea, Maslow’s “pyramid of human needs.” When Abraham Maslow was a professor at Brooklyn College in 1943, he organized the goals that motivate people into a layered pyramid. Maslow suggested that people only reach the top of the pyramid after satisfying the goals in the lower layers. Immediate physiological needs, like thirst and hunger, form the base of Maslow’s pyramid and are followed by safety, love and esteem. The top of Maslow’s pyramid is self-actualization, which psychologists define as achieving one’s full potential through creative or spiritual expressions, knowledge or positively impacting society.

In 2010, Kenrick published a new model of what motivates people, together with two ASU alums, Vladas Griskevicius and Mark Schaller and Neuberg. The research team reviewed Maslow’s pyramid through the lens of a half-century of progress in evolutionary biology, anthropology and psychology. 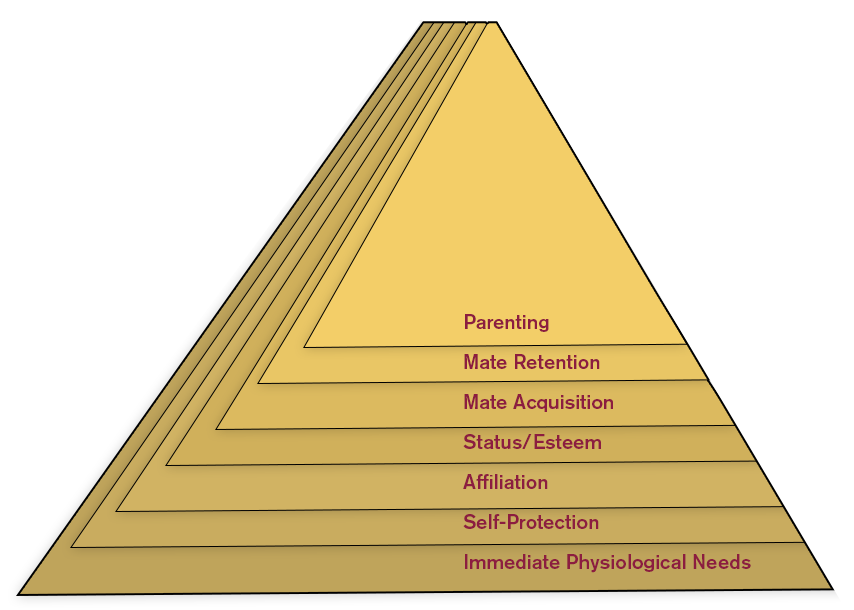 This interdisciplinary perspective led the researchers to make two major changes to Maslow’s pyramid. The goals now overlap because some continue to be important throughout life. The team also redefined the top of the pyramid.

“The top of Maslow’s pyramid does not make sense from an evolutionary perspective,” Kenrick said. “Self-actualization might be related to status and affiliation, as in the cases of Eleanor Roosevelt and Lincoln, two of Maslow’s examples of self-actualized people.  But what happens after a developing person finds friends and wins respect from those friends? The person moves on to acquiring a mate, hanging onto that mate and raising children, which are hardly removed from biology.”

Beyond the pyramid, and Arizona

Kenrick is also currently looking at how motivations like the ones described in the pyramid predict personality and behavioral traits in different people. With colleagues from ASU, he developed a questionnaire for such fundamental social motivations as self-protection, disease avoidance, belonging (affiliation), status, partner seeking, partner retention and care of kin. Kenrick and Michael Varnum, another psychology professor, have recently received funding from the National Science Foundation to expand this research beyond Arizona. As one part of this project, they are comparing how motivations in different societies, from Bolivia to Uganda, relate to how happy people are.

“We have given the fundamental motivations scale and a well-being scale to people in several different countries around the world. We are finding interesting links between fundamental motives and happiness.  For example, people are less happy in societies that are more concerned with status,” Kenrick said.

So far, the research team has data from more than 5,000 people in 20 countries.

Kenrick co-directs ASU’s Evolutionary Social Cognition Lab along with Neuberg and Vaughn Becker, associate professor with the Human Systems Engineering Program. He has written two popular books for general audiences: "Sex, Murder and the Meaning of Life" and "The Rational Animal," with Griskevicius. He has co-authored a social psychology textbook, used by hundreds of thousands of students around the world, soon to be in its seventh edition. Kenrick writes a blog hosted by Psychology Today and is currently working on another book with his son, titled "How to Climb the Pyramid of Life," which uses psychological research as a practical guide to achieving each of those fundamental human motives.

ASU student: Use your voice to help those who struggle

A person’s voice is their identity — and that can be expressed more profoundly through actions than words, according to an Arizona State University student who has dedicated his career to helping young people find their voices.“It is important to find your voice because your voice is like your fingerprint — it identifies who you are and what you’re about,” said Dontá McGilvery, a doct... 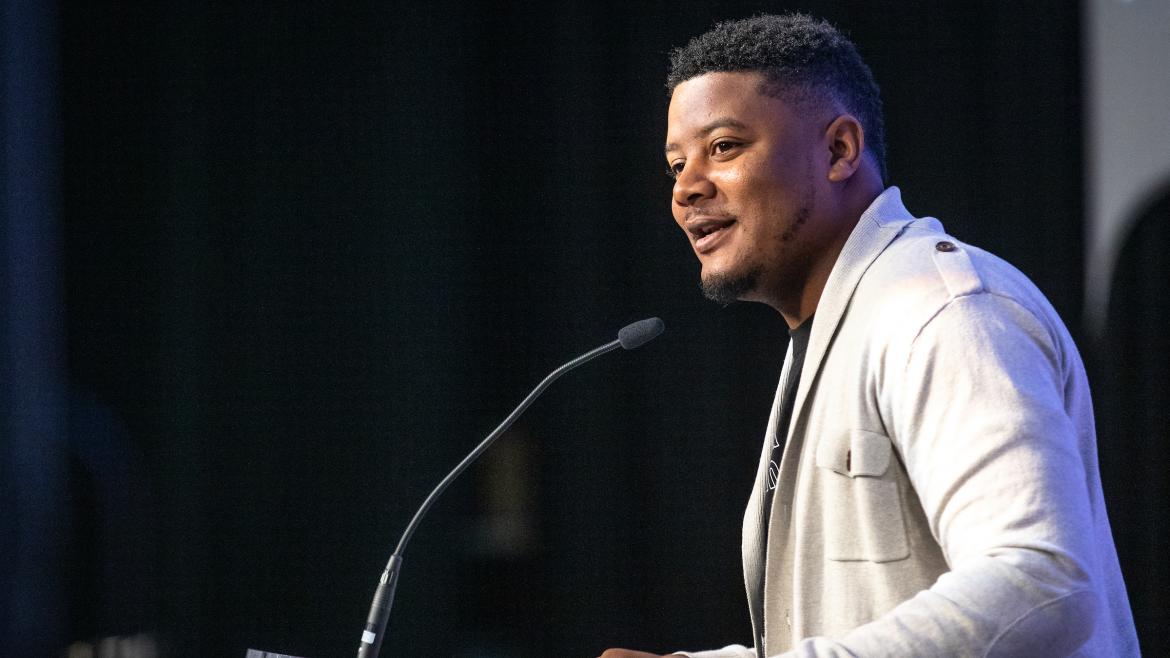 ASU doctoral student: Use your voice to help those who are struggling

A person’s voice is their identity — and that can be expressed more profoundly through actions than words, according to an Arizona State University student who has dedicated his career to helping young people find their voices.

“It is important to find your voice because your voice is like your fingerprint — it identifies who you are and what you’re about,” said Dontá McGilvery, a doctoral student in the theater for youth program in the Herberger Institute for Design and the Arts.

“You may be unable to speak a single word, but if you stand for what is right, you’ve actually said much more than the person who has said many words but done nothing,” he said.

McGilvery addressed a room full of young people at the 34th annual Dr. Martin Luther King Jr. Celebration at ASU's Downtown Phoenix campus on Thursday morning. He is the winner of the 2019 Student Servant-Leadership Award.

McGilvery, the founder of the nonprofit Sleeveless Acts Drama Company in Phoenix, told the crowd to use their voices to help those who are struggling. As an undergraduate at Southern Methodist University, he lived on the streets of Dallas for a year to research homelessness.

“As an artist, I use my voice as a way to protest and for creating space for people of color who are heavily misrepresented and underrepresented across the board, but especially in theater,” he said. “I use my artistic voice so that others can use their voice to stage their own stories rather than having others appropriate their culture.”

McGilvery also is the director of drama ministry at the First Institutional Baptist Church in Phoenix.

“My voice and my work is located at the intersection of body and soul, community and university, church and community,” he said. 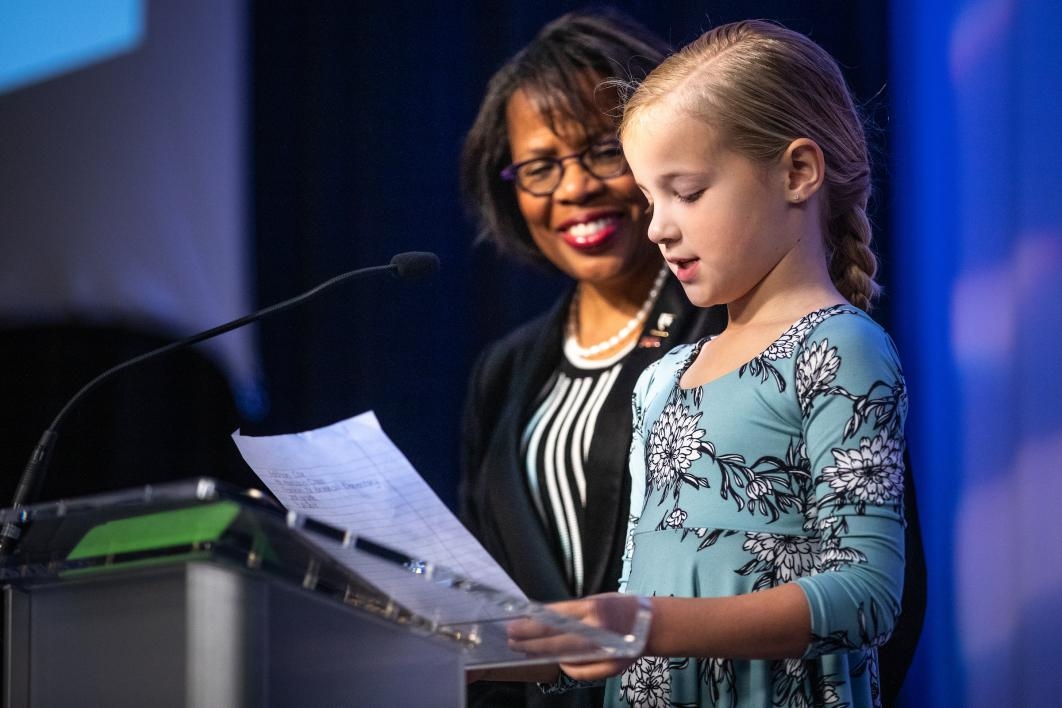 Seven-year-old Addison Cox reads her first-place essay on "My Special Grandma" at the 34th annual Dr. Martin Luther King Jr. Breakfast Celebration on Thursday morning. Standing next to her is Colleen Jennings-Roggensack, vice president of cultural affairs at ASU, who served as the emcee of the event. 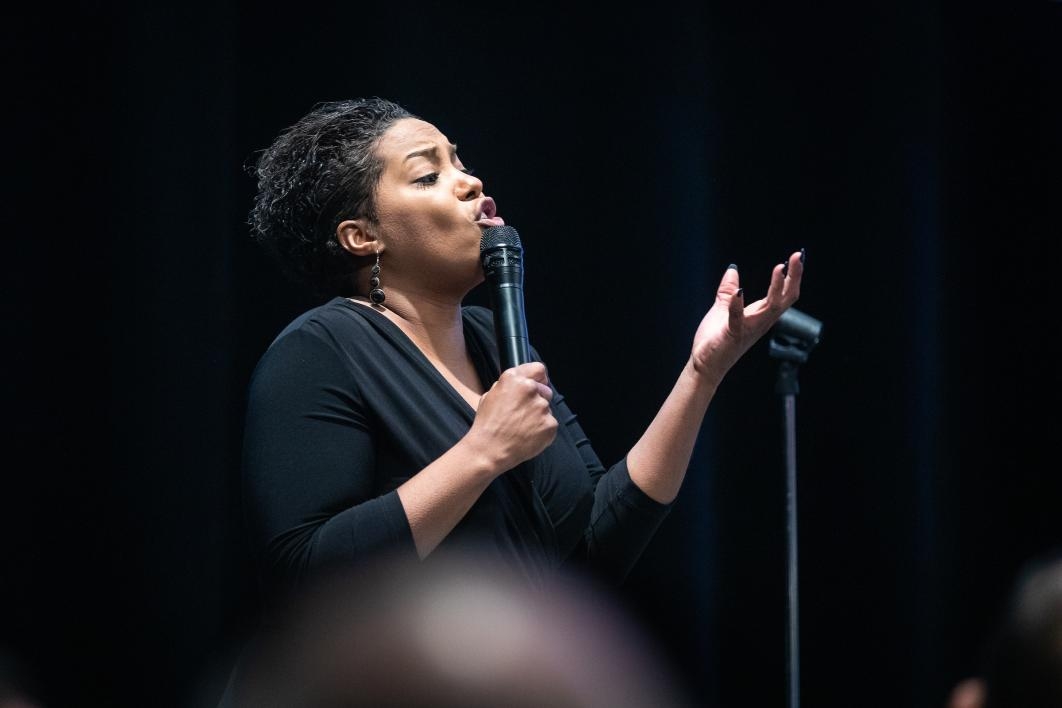 ASU graduate student Caress Russell, who is working on a MFA in performance theater, gives a dramatic presentation at the breakfast celebration Thursday morning on the Downtown Phoenix campus. 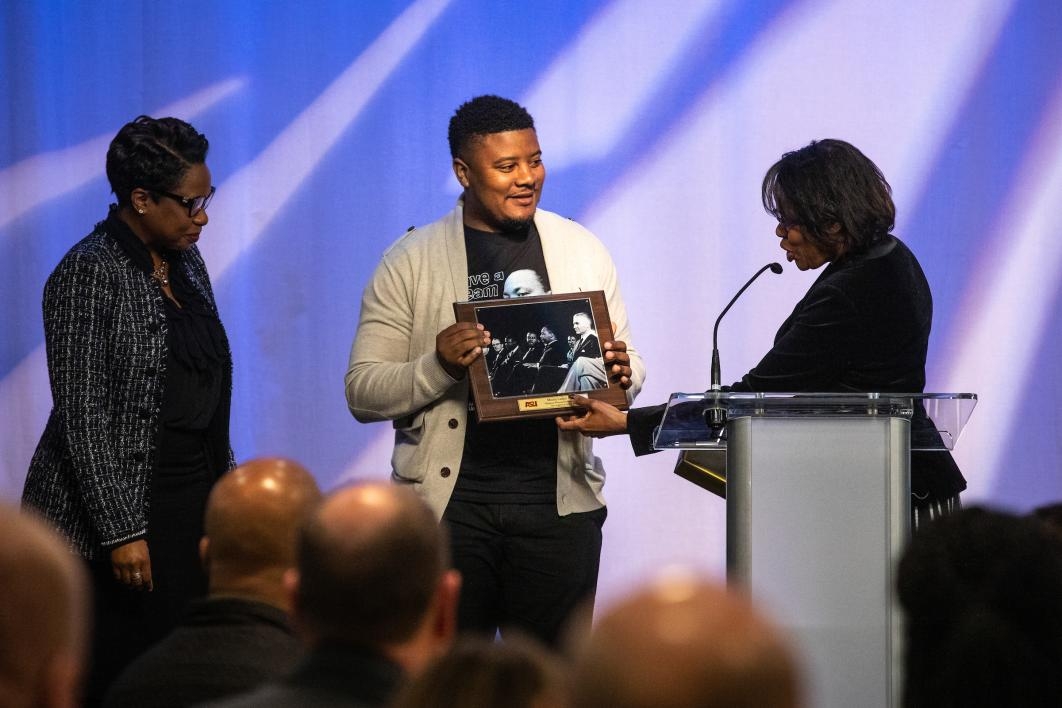 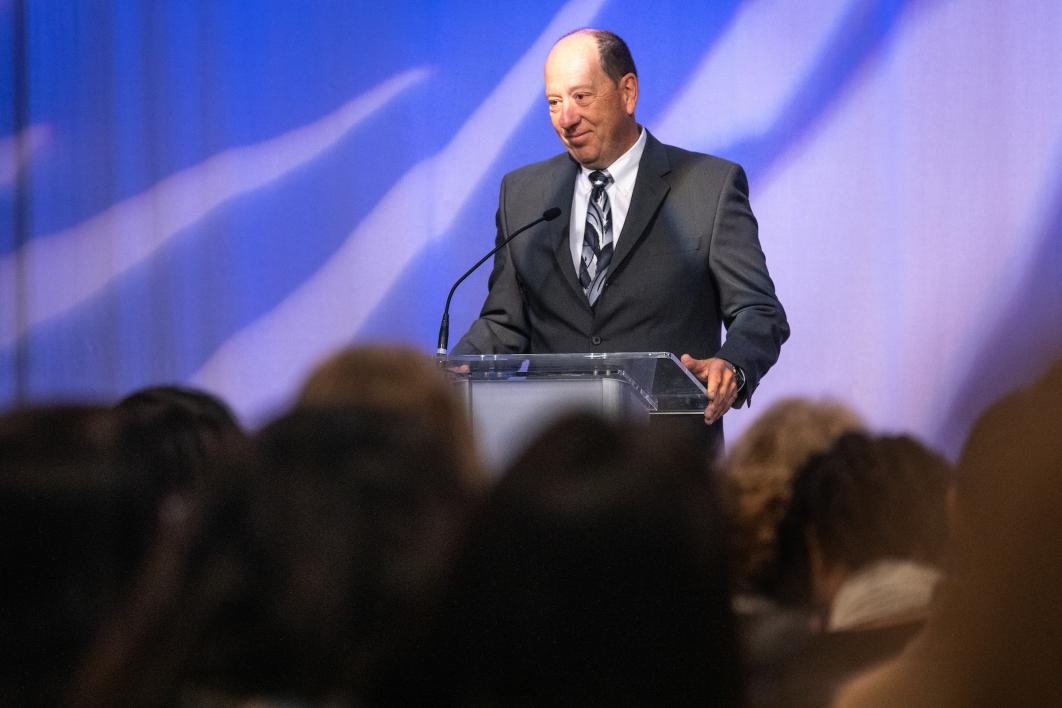 St. Mary’s Food Bank President and CEO Tom Kertis talks about the food bank movement that began with St. Mary's, the winner of the 2019 Community Servant-Leadership Award. Kertis compared John van Hengel, the man who founded St. Mary’s Food Bank in 1967, to Martin Luther King Jr. “Servant leaders change the world,” he said. “They forget about themselves and only care about everyone else.”

The breakfast celebration was just one of several events sponsored by the MLK Committee at ASU, according to Colleen Jennings-Roggensack, vice president of cultural affairs at ASU who served as the emcee of the event. The celebration included the winners of the statewide poster and essay contests for K–12 students, several of whom read their essays.

“ASU’s celebration is built around Dr. King’s example of servant leadership,” she said. “Making the world better through large and small acts of service is what we strive to do at ASU.”

On Wednesday, thousands of young people participated in the “MLK March on West” at ASU’s West campus — a tradition that dates to 1991 — that concluded with a reading of King’s “I Have a Dream” speech.

Throughout January, hundreds of ASU students participated in service projects on and off campus with partners including the Borderlands Produce Rescue food bank, the city of Mesa and the Society of St. Vincent DePaul, Jennings-Roggensack said.

St. Mary’s Food Bank is the winner of the 2019 Community Servant-Leadership Award for its work distributing food to nonprofit partners, fighting hunger in schoolchildren and helping to train people for employment in the food-service industry.

Tom Kertis, president and CEO of St. Mary’s Food Bank in Phoenix, said that the organization’s clients are mostly the working poor.

“They have jobs, but they just can’t make ends meet,” he said. “Sometimes they’re federal workers who have gone without paychecks.”

He compared John van Hengel, the man who founded St. Mary’s Food Bank in 1967 and went on to found many other food banks around the world, to Martin Luther King Jr.

“Servant leaders change the world,” he said. “They forget about themselves and only care about everyone else.”