ASU to bring Mars to the National Mall

Giant walk-on map of red planet will be on display this spring in Washington, DC

A Mars-orbiting camera designed and controlled at Arizona State University is the key ingredient in a project that will place a giant map of Mars on display on the National Mall in Washington, D.C., this spring.

To create the map and bring it to Washington, ASU graduate student Jonathon Hill has received a $10,000 grant from the American Geophysical Union, which is celebrating its 100th anniversary. The award is part of a series of large and small grants to recognize outreach projects that convey "the wonder and excitement of Earth and space sciences" to the public. 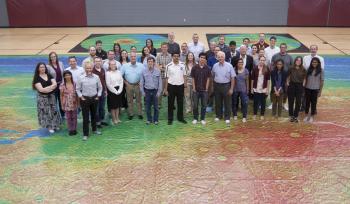 The THEMIS team of scientists stands on the giant map of Mars spread out on a basketball court at Arizona State University. The map for the Mars on the Mall project will be the same size. Photo by Robert Burnham/ASU Download Full Image

Hill is both a PhD student in ASU's School of Earth and Space Exploration and a mission planner for the THEMIS camera on NASA's Mars Odyssey orbiter. THEMIS is short for the Thermal Emission Imaging System, a visible and infrared instrument whose designer and principal investigator is Philip Christensen, Regents' Professor of geological sciences in the School of Earth and Space Exploration.

The map combines 24,000 THEMIS images taken over the mission's entire lifetime, which started Feb. 2, 2001, when the spacecraft began science operations.

"It took THEMIS over 15 years to collect images covering the entire surface of Mars, and then another three years just to stitch them all together," said Hill.

The THEMIS images were taken in Martian daytime at infrared wavelengths. Painstakingly mosaicked and blended, they cover the entire planet pole-to-pole and show every surface feature larger than 100 meters (roughly a football field) in size.

To provide the third dimension, the THEMIS image mosaic is combined with elevation data from another NASA instrument, the Mars Orbiter Laser Altimeter, or MOLA. This instrument's data is colored-coded to show elevation relative to Martian "sea level," which is the planet's average radius. Following terrestrial mapping practices, MOLA elevations below this altitude appear in cool colors, while the higher elevations are in warm tones that turn white at the highest elevations.

The map that will be placed on the mall measures 95 by 48 feet, essentially the same as an NBA basketball court. It is printed on a durable plastic material ordinarily used for billboards and giant advertising that wraps entire buildings. Together with its plastic underpad, the giant map will be tough enough to let visitors walk upon it wearing socks or other soft foot coverings.

Current plans are for Mars on the Mall to be displayed in front of the Smithsonian Institution's National Air and Space Museum for a period of time during the month of May 2019, when Congress is in session. It will also include a weekend so that a large number of visitors to the museum can explore the map.

"From the beginning of Mars Odyssey's mission, the THEMIS team has been keen to convey the excitement of Mars exploration to students and the public," said Christensen. "This is the latest step in that process."

Leigh McLean of Arizona State University’s T. Denny Sanford School of Social and Family Dynamics was recently awarded a nearly *$1.4 million grant from the U.S. Department of Education to conduct Project TEAS (“Teachers’ Effectiveness Across Subjects”).The four-year project will explore how elementary teachers’ and students’ experiences might differ across math, science, and literacy,...

The four-year project will explore how elementary teachers’ and students’ experiences might differ across math, science, and literacy, and what implications these differences may have for students’ learning in each subject. 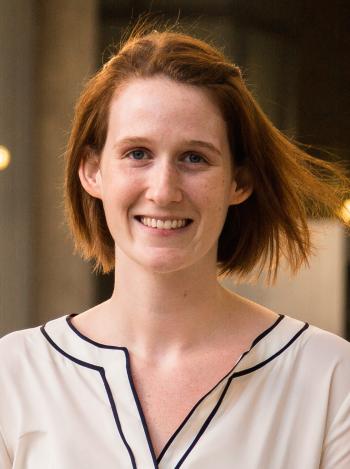 Assistant Research Professor Leigh McLean will conduct a four-year exploration into how elementary teachers’ and students’ experiences might differ across math, science, and literacy, and what implications these differences may have for students’ learning in each subject.

McLean and her research team will be working with approximately 150 teachers and their nearly 3,600 students across six local school districts, and will use a variety of methods for evaluating teachers’ and students’ experiences in each subject including in-depth surveys and video observations of real classroom sessions. This approach will give a very detailed look at the types of challenges and uplifts that teachers and students might face as they transition from subject to subject across a typical school day.

With this study, McLean is trying to identify “vulnerable contexts” in which elementary teachers and their students might be at a higher risk for having negative teaching and learning experiences. For example, she predicts that math will be an area where teachers and their students experience more negative feelings like anxiety and fewer positive feelings like enjoyment for teaching/learning.

“By discovering things like this, we will be able to inform the creation of teacher training and professional development programs that can help elementary teachers build the skills they need to support students in all core subjects,” says McLean.

Student opportunities: Project TEAS is currently recruiting undergraduate research assistants to assist in data collection, entry and analysis, much of which will take place in local elementary schools. This is a great opportunity for interested undergrads to gain valuable experience in educational research, as well as to make important connections not only with ASU faculty but with local community partners in the field of education. In addition, there will be opportunities for undergraduates who work on the study for research credits to transition into paid student worker positions if they would like to contribute longer-term. The project is currently recruiting for positions beginning in Fall 2019. For more information on these opportunities, please email the project TEAS team at teas@asu.edu.

*This project will be 100 percent financed with federal funds. Total amount of federal funds for the project is $1,396,915. No other funds from nongovernmental sources will be used to support this project.