Protecting U.S. elections against attack: What does biology have to do with it?

Most of us think of cybersecurity and biology as distinct areas of study. To better understand how we might apply principles of immunology to developing safeguards against cyberattacks, researchers are looking to ways in which the immune system of humans and other mammals naturally combats pathogens.

In the first “Dialogues in Complexity” lecture at Arizona State University, national experts will present their insights related to this emerging field of study. “Protecting Against Bad Actors: From Election Security to Immunology” will explore how “bad actors” — whether they be pathogens or hackers — contribute to the disruptive forces in U.S. elections and our immune systems. 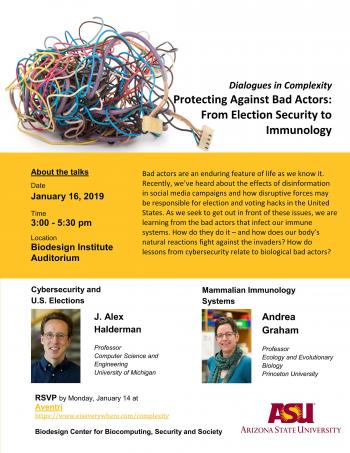 "Dialogues in Complexity, Protecting Against Bad Actors: From Election Security to Immunology” will be held Jan. 16 from 3-5:30 p.m. and will feature researchers prominent in the fields of cybersecurity and immunology. Download Full Image

At the Jan. 16 event, J. Alex Halderman of the University of Michigan will discuss cybersecurity and U.S. elections and Andrea Graham of Princeton University will discuss mammalian immunology. The event will take place from 3 to 5:30 p.m. at the Biodesign Institute Auditorium and is free and open to the public.

“The problem that the immune system solves for the body is roughly the same problem we would like cybersecurity systems to solve,” said Stephanie Forrest, director of the Biodesign Center for Biocomputing, Security and Society. Forrest is also a professor of computer science at the School of Computing, Informatics, and Decision Systems Engineering. Forrest and her team focus on the interconnectedness of biological systems and cybersecurity.

“Over the years, computer security has discovered willy-nilly many of the same ideas we see in biological systems,” Forrest said. “So the question is: Where do the parallels exist today, and how might we think about those parallels more deeply to understand new ideas for cybersecurity?”

The lecture series is a result of a partnership between Forrest, Graham, Simon A. Levin and Ann Kinzig. Levin is the James S. McDonnell Distinguished University Professor at Princeton University, and the namesake of ASU’s Simon A. Levin Mathematical, Computational and Modeling Sciences Center. Ann Kinzig is a senior sustainability scientist with ASU’s Julie Ann Wrigley Global Institute of Sustainability and a professor in the School of Life Sciences.

Halderman will describe how cyberattacks on U.S. voting infrastructure threaten the integrity of elections and stand to undermine confidence in democratic processes. He will also discuss recent efforts to defend against disruptions to U.S. voting, touching specifically on the cyberattacks that occurred in the 2016 presidential election and Congress’s decision to provide $380 million in funding to develop safeguards in the voting process.

Halderman has spearheaded numerous projects aimed at staving off cyberattacks that could threaten the voting process. After the 2016 election, he served as an adviser on recount initiatives in three states, and he testified in 2017 to the U.S. Senate Intelligence Committee regarding cybersecurity threats to the election process.

Graham will discuss mammalian immunology systems and the complex dynamics of host-parasite transmission. Graham specifically studies the driving forces of heterogeneity in hosts, parasites and disease, and with her research, she addresses how natural selection has changed host defense and parasite transmission.

“Graham’s talk will give an overview of both the promise and perils of mammalian immune defense systems,” Forrest said.

The main goal of the event is to expose the public to the important connections between biological and cyber defenses.

“I want the audience to see these topics in the same space, and to reinforce our public interest in securing our democracies,” Forrest said. In addition to the public event, a small group of researchers will convene to discuss “what is known about how biological systems defend themselves and the many cybersecurity methods that have been devised to protect computational systems,” according to Levin.

“We hope to identify commonalities, differences, gaps and outstanding questions, ultimately producing a unified understanding of how complex systems defend themselves against a variety of threats and perturbations,” he said.

ASU students or staff are urged to attend. RSVPs are encouraged as space is limited.

Health care will continue to be in the national spotlight in 2019, as uncertainty lingers about the future of the Affordable Care Act.Despite regular attempts by politicians to amend or repeal aspects of the landmark health care legislation, it remains the law of the land, providing health care coverage to roughly 155,000 Arizonans and 8.5 million Americans.As the country grapples with the best wa... 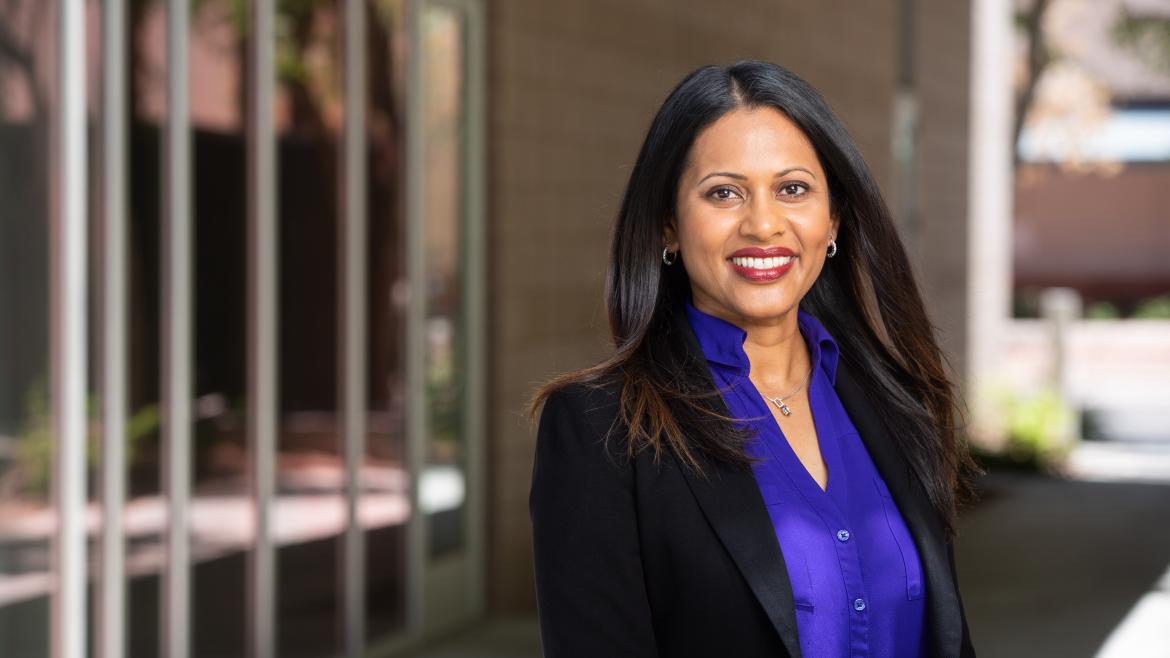 Health care will continue to be in the national spotlight in 2019, as uncertainty lingers about the future of the Affordable Care Act.

Despite regular attempts by politicians to amend or repeal aspects of the landmark health care legislation, it remains the law of the land, providing health care coverage to roughly 155,000 Arizonans and 8.5 million Americans.

As the country grapples with the best way to ensure the health and well-being of its citizens, ASU Now asked College of Health Solutions Assistant Professor Swapna Reddy to reflect on the state of health in America. She shared her top five health care wishes for the new year.

1. Decrease the prevalence of maternal mortality

"The U.S. has the highest rate of maternal mortality in the developed world — and African-American mothers are likely to have the worst outcomes — so we can do better for our women and mothers."

2. Reduce the rate of uninsured children in the United States

"If we say we care about American children — let's operationalize that through policies and action. The U.S. rate of uninsured children has risen for the first time in a decade, despite a strong economy," Reddy said. "This reflects deep inequities and dangerous implications from cuts to public programs experienced by the most vulnerable amongst us."

3. Place more emphasis on preventive health and well-being, especially as it relates to 'diseases of despair'

"Life expectancy has decreased in the U.S for the third year in a row, the only developed country to hold this record. This is largely due to a significant spike in opioid-related deaths and suicides."

4. Ensure and strengthen protections for people with pre-existing conditions and continue to expand access to care through Medicaid expansion

"The American people have spoken decisively that they do not want be discriminated against for insurance coverage based on pre-existing conditions. Let's listen to them and support policy solutions for affordable and comprehensive coverage."

"Let's refocus on evidenced-based medicine to protect the health of all of our children and not turn back the clock on the spread of dangerous childhood illnesses. The U.S. is currently experiencing a rising sentiment in opposition to vaccination for preventable childhood communicable diseases — a dangerous trend, especially in 'hot spots' such as Phoenix that have amongst the highest rates of unvaccinated children in the U.S."