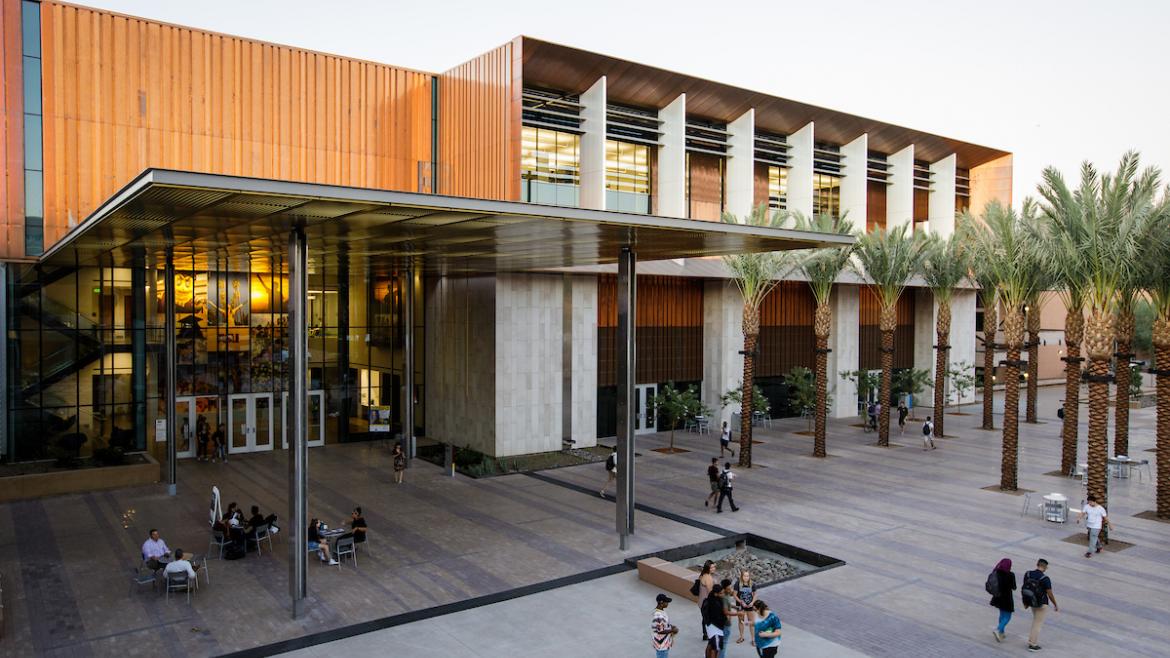 Lauren Barney and Tanzil Chowdhury are members of the forensics team at Arizona State University, a diverse community of speech and debate enthusiasts who parley the power of parlance into competitive communication. They are also part of a small but driven class of students who chose to continue speech and debate competition at the college level after participating in ASU’s Hugh Downs School of Human Communication Invitational in their not-so-distant high school past.

“High school forensics is massive and getting more participants every year as evidenced by the scores of students we are seeing at this tournament in recent years,” said Adam Symonds, director of ASU Forensics. “This tournament is about offering an opportunity for anyone from any type of forensics event to be here and our goal is to offer one campus, one stop for high schools to bring all of their students to campus to compete in different events.”

Formerly known as the Southwest Championship, the Hugh Downs School invitational is the largest high school speech and debate tournament in Arizona. More than 125 schools from more than 20 states and two countries — the U.S. and Taiwan — are expected to participate in public speaking and debate events over three days, from Jan. 4 to 6.

Symonds says high school students who visit ASU’s Tempe campus to participate in the Invitational embrace the opportunity to see where they can potentially go to school and he’s hoping that the tournament will also entice more students to join ASU Forensics given the benefits speech and debate offers to students across all disciplines.

“It teaches clarification of personal values; how to conduct credible research; develop advocacies that are meaningful to you; and how to speak on your feet,” Symonds said. “Professionally, we see what folks really want out of their employees are people who can anticipate data, bring an argument to bear and defend it. Debate is really useful because it changes the way your brain works. It changes the way you think about things. You can make better comparative assessments.”

Now a sophomore in ASU’s W. P. Carey School of Business, Barney joined ASU Forensics in her first semester at ASU after learning through high school speech and debate that she wasn’t as shy about speaking in public as she once thought she was.

“I have been able to transfer a lot of the skills that I had in high school, but I’ve also been able to learn so much more in college.” Barney said. “College debate has more freedom when it comes to researching what you want, and I really appreciate being able to strengthen the skills I learned in high school.”

Chowdhury said the ASU high school tournament was a perennial activity for his debate team in his teenage years and that being a part of ASU Forensics has been extremely rewarding and a welcome complement to his junior year studies in engineering and science.

“I get to read about so many different things like philosophy and politics that I wouldn’t get to read about otherwise. I get to engage with a great group of people, coaches and other members of our team. I get to travel across the country — it’s just been really fun.”

Clark Olson, an instructor in the Hugh Downs School and the director of ASU Forensics from 1984 to 1999, said ASU has earned quite a reputation as a national leader in collegiate speech and debate tournaments in recent decades and has taken pride in former students who were motivated by skill and inspired by experiences in ASU Forensics to pursue their chosen career paths — TV writer and producer Anthony Zuiker among them.

“We had Tony Zuiker, who was the founder of ‘CSI,’” Olson said in reference to the forensics TV crime drama “CSI: Crime Scene Investigation.” “Because the term ‘forensics’ is always misinterpreted as being about dead bodies — when it actually means speaking for judgment — Tony decided to capitalize on forensics, using it in the modern way people think of the term, to create the TV series.”

Zuiker’s pal, actor, producer and “CSI” writer Dustin Abraham also shored up the ASU Forensics squad during his years at the university, according to Olson, along with a number of other former students who have gone on to successful careers in to politics, business, law and the performing arts.

ASU Forensics’ team started in 1885, the same year that ASU started as the Territorial Normal School. It is the oldest student organization at ASU and continues to welcome participation from undergraduates from any discipline enrolled at ASU.

“We have majors from engineering, business, English, social justice, communications, political science — you name it,” Symonds said. “The number one thing I encourage students to do is to find what motivates them — what makes them want to research and advocate — then we talk about how to make that competitive and make it a thing that people are really interested in and want to watch.”

Speech and debate fans can watch high school students — and perhaps some future ASU Forensics team members — tackle policy and prose during the 2019 Hugh Downs School of Human Communication Invitational on Jan. 4-6 at ASU's Tempe campus. Almost 2,000 students and judges participated in the 2018 event, and a similar attendance count is expected for the 2019 tournament. Final rounds will be held in large auditoriums throughout the day on Sunday, Jan. 6. Awards will be presented in the Student Pavilion Auditorium at 6 p.m. that day.

Thinking visually, communicating that way, is an opportunity for me to show you how I view the world. I really care about the stories I tell and how I present them, and I hope you get something out of the telling.This past year I started collaborating with University Archivist Rob Spindler on a new series that takes a place or object on our campuses and tells you the history behind it. Every so of...

Center on the Future of War , School of Politics and Global Studies , The College of Liberal Arts and Sciences , Center for the Study of Religion and Conflict 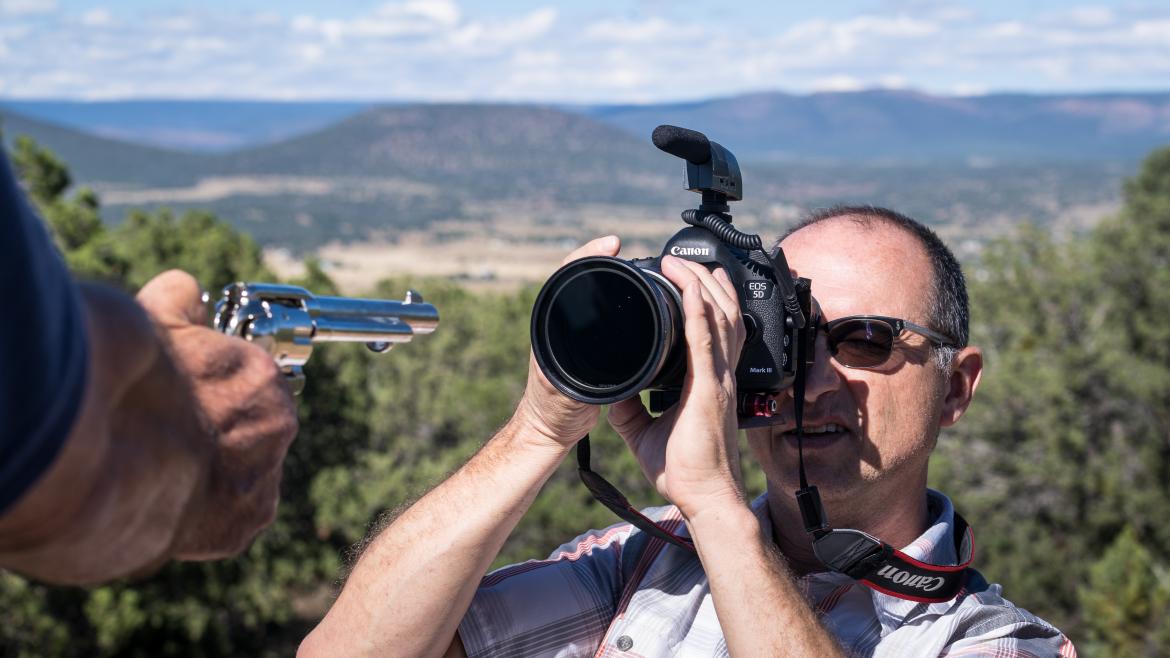 For ASU Now videographer, finding both the drama and the heart is the key to a good story

Thinking visually, communicating that way, is an opportunity for me to show you how I view the world. I really care about the stories I tell and how I present them, and I hope you get something out of the telling.

This past year I started collaborating with University Archivist Rob Spindler on a new series that takes a place or object on our campuses and tells you the history behind it. Every so often you will see a “Hidden in Plain Sight” video that will hopefully clarify something you have always wondered about on your campus (such as the Philomathian seat or how a gym hosted a very famous Jimi).

Our features look at both the past and the future of ASU. Here are some of the top stories this year compressed into two minutes:

And here's a closer look at some of my favorite stories of 2018.

Delving into a piece of Arizona history: Pleasant Valley War

In the late 1880s and early 1890s in Pleasant Valley (now Young, Arizona), residents were on constant alert over cattle rustling and attacks, leading to a high level of stress and wariness that boiled over into violence and massacre. Eduardo Obregón Pagán, Bob Stump Endowed Professor of History at ASU, released a book, "Valley of the Guns," analyzing the trauma of the Pleasant Valley War. We explored both his book and the history behind it.

This video production included: many different sound effects, discovery of old photographs in the ASU archives, the use of a replica Colt 45 peacemaker pistol, on-location video production in Pleasant Valley, a visit to the gravesites of some of the victims and a whole lot of imagination. Pagán is a great historian, who has written an insider’s view of how situations can be blown out of proportion and end badly, very quickly.

A man and his Thunderbird

After Chris Ames’ 1956 Ford Thunderbird continued to overheat at slow speeds (as did every other '55,'56 or '57 T-bird), he decided to do something about it. He returned to ASU to take a thermal dynamics course to try to correct the problem. He succeeded through research and redesign of a specific part attached to the water pump. His new part, A432, will be available for purchase in the near future. Ames is a go-getter who didn’t let age or retirement get in the way of going back to school and taking an engineering course at ASU to solve a problem that had been plaguing a classic car for over 60 years. He is a very nice person who persisted till he succeeded, something we all should aspire to.

The ASU bookstore began selling bags created from recycled banners used on all of ASU’s campuses. The bags are produced here in Tempe at the fashion incubator FABRIC. Not only is it an example of the university assessing the use of materials through their entire lifecycle, but also a way to extend the life of discarded materials to provide useful products to the public. More importantly, this project provided jobs through a FABRIC program that teaches young adults with disabilities how to sew, work as a team and produce a product for the market. The young adults creating these works of art are amazing. Along with their mentor, they are exceptional people.

A Fulbright Scholar and his passion for the desert

Eli Rafael Perez Ruiz, a Fulbright Scholar at ASU from Mexico, talks about his research on ecological and hydrological processes within deserts. Other than an amazing opportunity to join him at work in the beautiful desert south of Tucson, Arizona, it was also an opportunity to get to know an ingenious scholar who cares deeply about his research, his family and the Sonoran and Chihuahuan deserts.

Tell me your story

This job is a continual learning experience, nonstop. I haven’t even touched on all the possible stories out there and the different ways I can present them. With the help of our incredible teams at ASU Now and Media Relations and Strategic Communications, I look forward to trying new techniques and telling new stories. I want to hear about what makes your corner of ASU interesting, so send stories my way at kenneth.fagan@asu.edu. Looking forward to hearing from you!