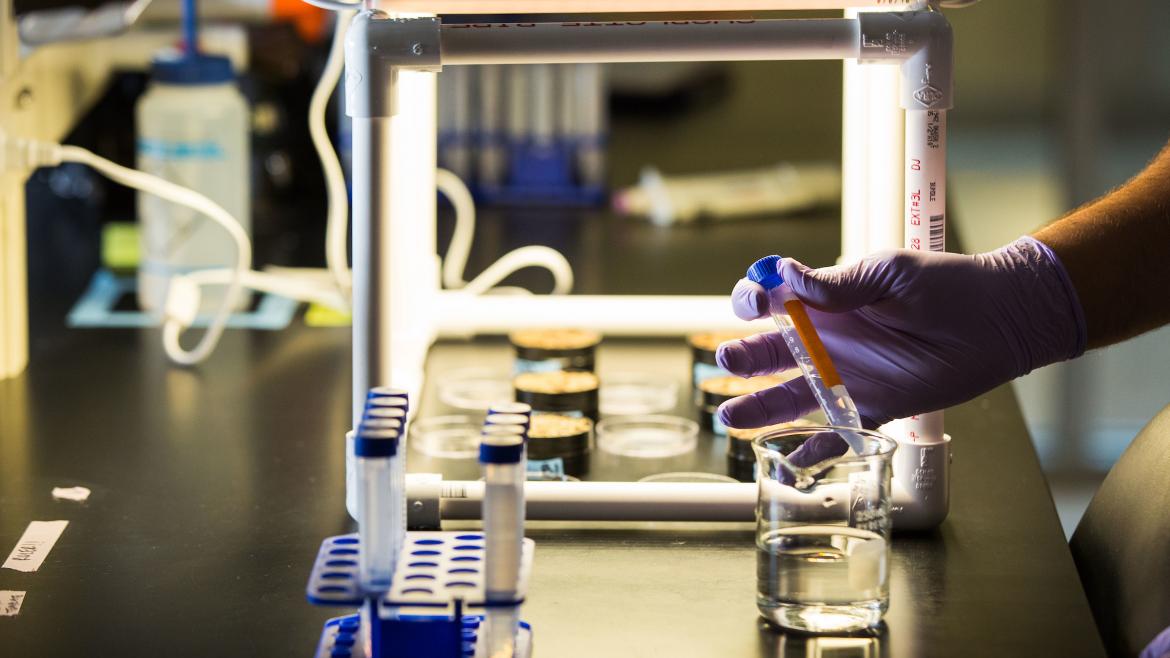 ASU is holding its rank at No. 44 for total research expenditures in the U.S.
Among institutions without a medical school, ASU moved up one spot to No. 8.
December 20, 2018

U.S. National Science Foundation report ranks ASU No. 1 in anthropology expenditures, No. 2 in geological and earth sciences, No. 3 for transdisciplinary research

Continuing on its path as a rapidly growing research enterprise, Arizona State University reported $545 million in research expenditures for fiscal year 2017, up from $518 million in FY16, according to a recent report by the U.S. National Science Foundation. ASU is holding its rank at No. 44 for total research expenditures in the U.S., remaining ahead of the California Institute of Technology and the University of Chicago. Among institutions without a medical school, ASU moved up one spot to No. 8, ahead of Princeton University and Carnegie Mellon University.

In addition, ASU announced that its research expenditures for FY18 now total more than $600 million — a first for the university.

The NSF’s FY17 Higher Education Research and Development (HERD) rankings, its most recent report based on FY17 expenditures, has ASU holding a strong lead among all reporting institutions, including a No. 1 ranking in anthropology expenditures, ahead of Harvard and Stanford universities.

ASU ranks No. 2 in geological and earth sciences, ahead of Stanford University, MIT and Penn State; and ranks No. 3 for transdisciplinary research expenditures, ahead of Ohio State, MIT and Michigan State University. ASU also made significant gains in rankings for expenditures in metallurgical and materials engineering, physics, and visual and performing arts, according to the HERD report. 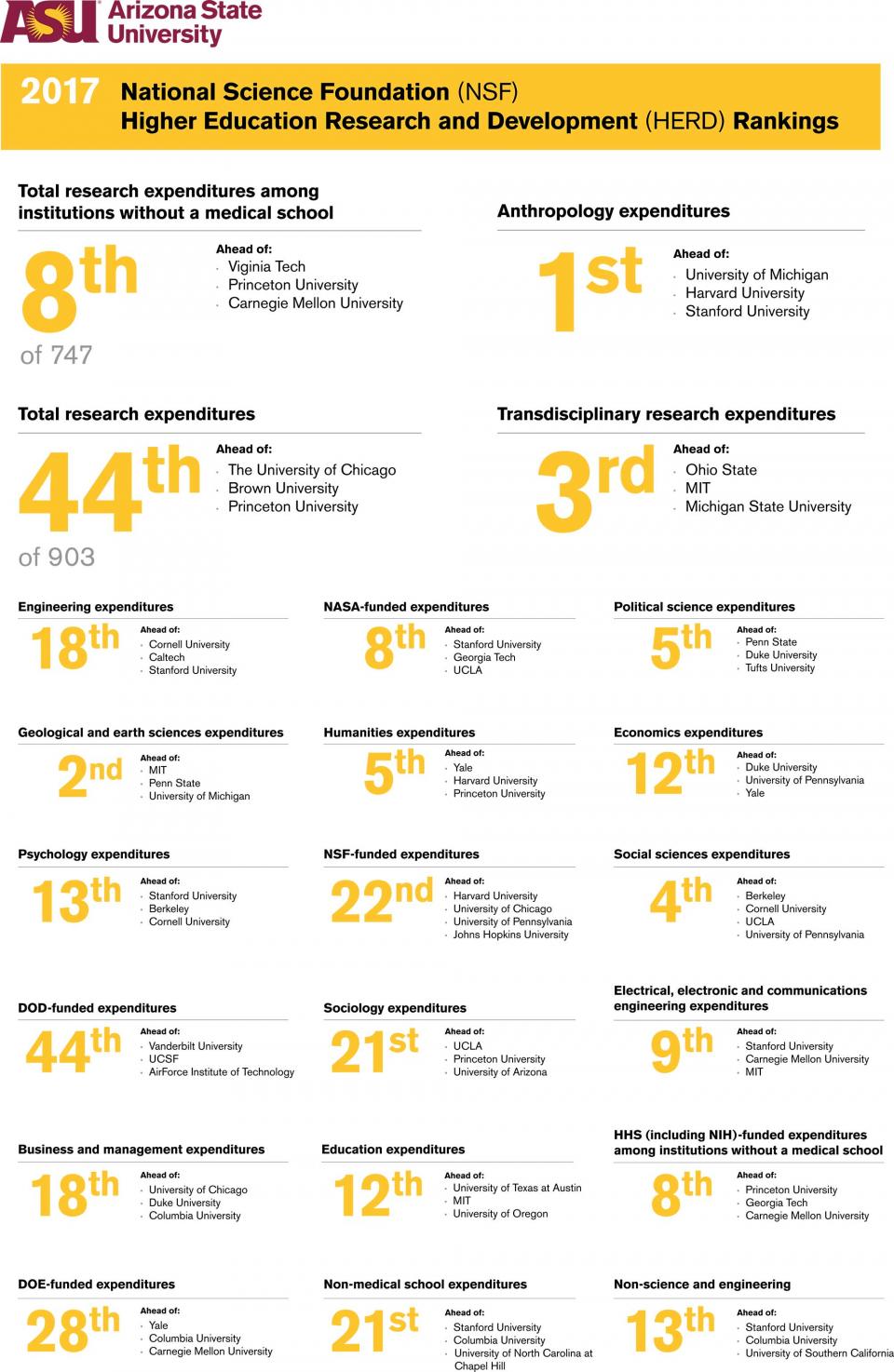 ASU receives research funding through several avenues, including businesses and nonprofits, as well as federal, state and local grants.

Since 2002, ASU’s research enterprise has seen enormous growth. The university secured a number of prestigious grant awards from federal institutions, including the U.S. Department of Energy, NASA and the Department of Defense. To support this growth, ASU launched several interdisciplinary initiatives, providing a framework for researchers to build teams that can solve complex global challenges.

For example, ASU’s Biodesign Institute, which launched in 2004, focuses on interdisciplinary research approaches to global health, security and sustainability. Since its inception, Biodesign Institute has attracted more than $740 million in funding.

In 2004, ASU established the Julie Ann Wrigley Global Institute of Sustainability. The institute is the hub of ASU’s sustainability initiatives and research. Experts from a range of disciplines in the natural and social sciences, medicine, engineering, mathematics, humanities and the arts work to solve global sustainability problems. In FY17, sustainability scientists and scholars across ASU accounted for $93 million in research expenditures.

Psyche is an asteroid orbiting the sun between Mars and Jupiter. ASU is leading the Psyche Mission, which will launch in 2022, travel to the asteroid and, upon arrival in 2026, give scientists the first up-close view of an all-metal world.

“I will be able to take my experience with developing the remote-sensing controls for the unmanned Psyche spacecraft and apply that to developing remote sensing and navigational control systems for manned space flights in the future,” Hawes said. “Working on the project has helped me understand that NASA leads, partners with, contracts with and cooperates with private- and public-sector organizations, and other nations, to explore space and ultimately expand humankind’s understanding of our role in the universe. For me, working on a NASA mission fulfills my goals to gain technical, interpersonal and leadership skills for my career.”

For Michael Steptoe, a doctoral student studying visualization and predictive analytics in the Ira A. Fulton Schools of Engineering, ASU’s transdisciplinary structure has been vital to his education.

“When I was an undergraduate, I had no idea what visualization even was, or that it was this hot research field,” Steptoe said. “It was huge for me to learn about it and go into this field. My work allows me to look at data sources and build out decision systems so that decision makers can make informed choices and policy.”

Steptoe is currently working with ASU’s Global Security Initiative on its Department of Homeland Security project.

In 2002, ASU’s expenditures totaled $123 million. Since then, ASU’s research enterprise remains as one of the fastest growing among universities.

“Through the application of a comprehensive, strategic approach, we expanded our research footprint while continuing to advance interdisciplinary collaboration that enables our researchers to secure funding and solve global grand challenges,” Panchanathan said. “Our faculty, students and staff are integral to this growth, tirelessly seeking new opportunities for research and discovery.”

ASU is well on its way to its goal of expanding the university’s research enterprise to $815 million in expenditures by 2025.

A key element to research growth is building advanced and appropriate lab space. ASU has built several advanced research buildings. The latest is the five-story, 191,000 square-foot Biodesign C building, which opened in the fall of 2018. Biodesign C will be home to 80 lead researchers and 400 support staff. Scientists there will tackle major health care and environmental societal issues through its multidisciplinary research centers, including the ASU-Banner Neurodegenerative Disease Research Center, the Biodesign Center for Applied Structural Discovery, the Biodesign Center for Mechanisms of Evolution and several labs from ASU’s School of Molecular Sciences. A new research tool will be completed in the year ahead — the world’s first compact X-ray free-electron laser — a key instrument that can unlock the interaction of molecules and be used in drug discovery and energy research.

Along with expanded research space, ASU also is adding star researchers to its faculty.

ASU’s Center for Global Discovery and Conservation Science will launch in 2019. Greg Asner, who will join ASU in January from the Carnegie Institution for Science, Washington D.C., will lead the center.

Asner has been a leader in airborne mapping techniques that help reveal functional diversity and vulnerabilities of various ecosystems and identify targets for conservation. Asner was elected to the U.S. National Academy of Sciences (2013) and is a fellow of the American Geophysical Union (2015) and of the Ecological Society of America (2016).

Kathleen Merrigan, former U.S. Deputy Secretary of Agriculture and a leader of sustainable food systems, was named the first executive director of ASU’s Swette Center for Sustainable Food Systems in fall 2018. Merrigan brings decades of experience in agriculture, sustainability and food systems to ASU, which will strengthen ASU’s global impact on research, policy and education.

“I joined ASU because of its commitment to inclusivity and collaboration,” Merrigan said. “Soaring rankings and research prowess stem from our dedication to public values. Together with our students, we are designing solutions to society’s most pressing challenges. The work is important and energizing. We are solving problems.” Mehaffey was part of the first women's Palmer Cup team in 2018.