Melissa Joseph has worn many hats since leaving ASU in 1979; this year she returned to her first love

With entire social media handles dedicated to the genre, today’s epic stories of animal connections enjoy an easy ride to internet fame. But it was not Instagram or Facebook that shot the life of Baxter, a 19-year-old hospice therapy dog, into the limelight. It was a memoir penned by his owner, Arizona State University alumna Melissa Joseph.

Self-published by Joseph in 2007, "Moments with Baxter" chronicles patients at San Diego Hospice, where she and the golden retriever/chow mix worked as volunteers visiting the terminally ill. YouTube videos showed Joseph pulling Baxter on a pillow-topped wagon through the halls of the facility, and when he died in 2009, online features hailed him as the oldest therapy dog in the world. 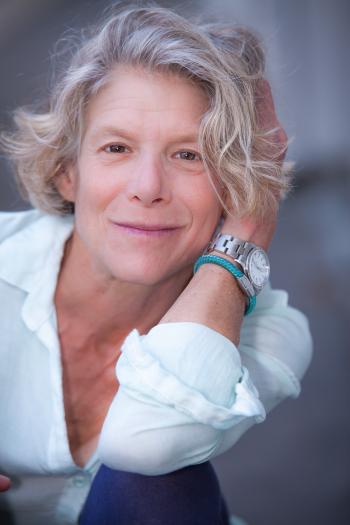 Joseph brought his legacy to life through her writing and split the money generated from book sales between San Diego Hospice and a local animal shelter. But with stints as an entrepreneur and English teacher across the country, she has held many titles of her own.

The Mississippi native first came to Tempe as a transfer student from the University of New Hampshire.

“I came for the beauty; the whole area had this expansiveness that really worked for me,” she said.

Joseph went on to complete a Bachelor of Arts in French in 1977 and a Master of Arts in English in 1979, both at ASU’s College of Liberal Arts and Sciences. She then moved away from language and Arizona, founding a string of businesses including a boutique pet store, a specialty dress shop and the first nonsmoking coffeehouse in her hometown of Jackson.

Years later, she was back in the classroom teaching writing and English as a second language, the latter of which she says was bolstered by the master’s degree she earned at ASU. It was within that role that she made her way back to writing and decided to take on the the project about Baxter.

“I always had this insecurity about teaching writing while never having written anything myself,” she said. “Each person who Baxter met had a special story, so I put my head to my heart and decided I needed to write a book about these people and get them out there.”

Going from business owner to teacher and writer may not seem like the most natural transition, but for Joseph, they all derive from a creative drive that came alive during her time in Tempe.

“I had very lovely relationships with several professors who ignited my growth and fostered my intellect,” she said. “They taught me that I really could go on and do something with my life.”

Over a decade since "Moments with Baxter," Joseph made another return to writing in 2018 with a collection of original poetry titled "A Tender Force," published by San Diego’s Konstellation Press.

“This one was about finding my own, authentic voice,” she said. “I’ve always dreamt of writing a poetry book, so it was such a milestone for me because it made me feel like my work maybe did have some meaning.”

Profits from her latest work will also give back — this time, to the National Institute of Mental Health.

“I always knew it was going to be a philanthropic effort, same as Baxter’s story,” she said. “I just want to connect with people, and I think the world is in need of mental health; we all are.”

Joseph’s second collection of poetry, "Powerfully Simple," is due out this April. Still, she hesitates to call herself a writer.

“Basically I’m just a human being out here struggling, just like everybody else,” she said. “I speak my voice in many different mediums; poetry is just one of them.”

'Tis the season to be single

The electric atmosphere of the holiday season often shines a bright light on feelings of togetherness, intimacy and the state of coupledom in festive surroundings. But that light can sometimes bear a refractive quality, casting a glaring spotlight on "lonely" single celebrants in the midst of “cuffing season” — that time of year when people who would normally rather be single find themselves... 'Tis the season to be single

The electric atmosphere of the holiday season often shines a bright light on feelings of togetherness, intimacy and the state of coupledom in festive surroundings. But that light can sometimes bear a refractive quality, casting a glaring spotlight on "lonely" single celebrants in the midst of “cuffing season” — that time of year when people who would normally rather be single find themselves longing to be coupled up like everybody else.

In 2014, one study suggested that there are officially more single adults living in the United States than married adults. And at least one Arizona State University professor says there are actually a great many adults who are happy to be living single.

“Far from being alone, many singles are surrounded by loving friends — their intentional family — during the holidays,” said Elizabeth Brake, who teaches philosophy in ASU’s School of Historical, Philosophical and Religious Studies. “As I share in my book 'Minimizing Marriage,' single people’s friendships can be just as valuable and profound as romantic relationships or marriages.”

Brake even coined a word — "amatonormativity" ­— to bring the conversation to the fore about the unbalanced assumption that everybody wants to be in a romantic relationship. She spoke about this and more in a recent interview with ASU Now.

Question: The holiday season is often seen as a lonely time for singles. Are singles really lonely? Or does the social construct of coupledom pressure feelings of loneliness and isolation among otherwise content singles during the holidays?

Answer: There is no reason for single people to be isolated on the holidays. The stereotype of singles as lonely also overlooks the fact that people can experience great loneliness within marriages and families. One challenge the holidays does bring for singles is running a gauntlet of questions from well-intended family members who assume that singles are yearning for marriage. Another is that some families of origin treat singles differently from married family members — for example, including spouses but not close friends in the festivities. According to researcher Bella DePaulo in her book “Singled Out,” lifelong single women are the least lonely people. It makes sense that lifelong singles experience less loneliness because they find ways to cope and many actually prefer solitude. In fact, DePaulo makes a case that many of the studies that claim to show that singles fare worse than married people actually rely on data that conflates divorced and widowed people with lifelong singles, who are not significantly worse off than married people.

Q: We have seen the studies — more and more Americans are staying single by choice and trends indicate that about 1 in 4 young adults today will have been single all of their lives by the time they reach the age of 50. What do you think is influencing the growing contentment in singleness?

A: Historically, the trend to more women opting to live outside of marriage was shaped by three changes in the 20th century: the availability of effective birth control, increased opportunities for women to work outside the home and changes to divorce law, making divorces easier to obtain. Greater social acceptability, including more positive media portrayals of single women, and a trend towards living in urban areas likely also contribute.

Q: Younger people, millennials in particular, have been researched as being more likely to stay single longer and also having fewer romantic partners than previous generations. What are some of the dynamics that might be influencing this social change?

A: It’s tempting to speculate about the reasons younger people today are more likely to stay single, but the hard economic facts suggest one clear reason: millennials are worse-off economically than previous generations. To quote this recent study published by the Federal Reserve Board, “Millennials are less well-off than members of earlier generations when they were young, with lower earnings, fewer assets and less wealth.” Researchers have long reported a “marriage equality gap” — people with less money have lower rates of marriage. Not only do people sometimes associate marriage with financial stability — waiting to marry until they are financially secure — the material conditions needed to nurture marriage-like relationships take money: especially, private and stable living arrangements.

Q: When the conversation about singles comes up, the focus seems to be primarily on women. Is being single more of a problem or a burden for women than it is for men?

A: This is a very interesting question. I think the perception that women “suffer” singleness while men enjoy it is based on sexist perceptions about women’s value being tied to their marital status. There is also gender stereotyping associated with sex outside marriage; single men can be “studs” or “players,” but sexually active single women don’t tend to get similar cultural approbation. Because these stereotypical perceptions and expectations shape social interaction, they can create more of a burden for women — e.g. women often report feeling more awkward dining alone in a restaurant.

But contrary to the perception that women benefit more from marriage than men do, the bulk of research showing that marriage benefits spouses shows that its benefits are more significant for men than for women, as Susan Maushart discusses in her book “Wifework.”

Q: You introduced a new idea in the conversation about singlehood several years ago — amatonormativity. What does this mean?

A: Amatonormativity is the value judgment that romantic, sexual couple relationships are more valuable than nonromantic, nonsexual friendships — and that everyone has such a couple relationship as a goal. These assumptions are false, but they shape so many of our social structures and interactions such as the well-meaning barrage of questions like, “When are you going to get married?” from close relatives. Close friendships can involve just as much closeness, care, and responsibility as marriages — and even more than some marriages. People opt to be single for many different reasons, including identifying as asexual and/or aromantic. There are also some people who just have no interest in romantic, sexual relationships.

Q: Your research also explores the culture of polyamoryThe philosophy or practice of being in consensual, intimate relationships with more than one partner at the same time. and the idea of abolishing marriage. What are we seeing more or less of in these two realms than we have seen in the past?

A: In the last decade or so, polyamory has become a much more familiar term. It has a lot more visibility, although social acceptance continues to be mixed. The asexual movement appears to be heading in the same direction, toward more widespread understanding of the fact that not everyone experiences sexual attraction. I think what we’re seeing is other marginalized sexual identities — polyamorists, asexuals, aromantics — calling for equality and recognition as gays and lesbians have.

I don’t myself argue for abolishing marriage, but rather for extending it. But one argument for marriage abolition is that marriage law privileges certain types of relationships — excluding polyamorous groups or networks and close-friend or extended-family relationships from the significant legal protections of marriage law.

Elizabeth Brake is the author of the book "Minimizing Marriage: Marriage, Morality and the Law," published in 2012. She is also the editfor the Journal of Applied Philosophy and has faculty affiliations with the Lincoln Center for Applied Ethics and Barrett, The Honors College at Arizona State University.