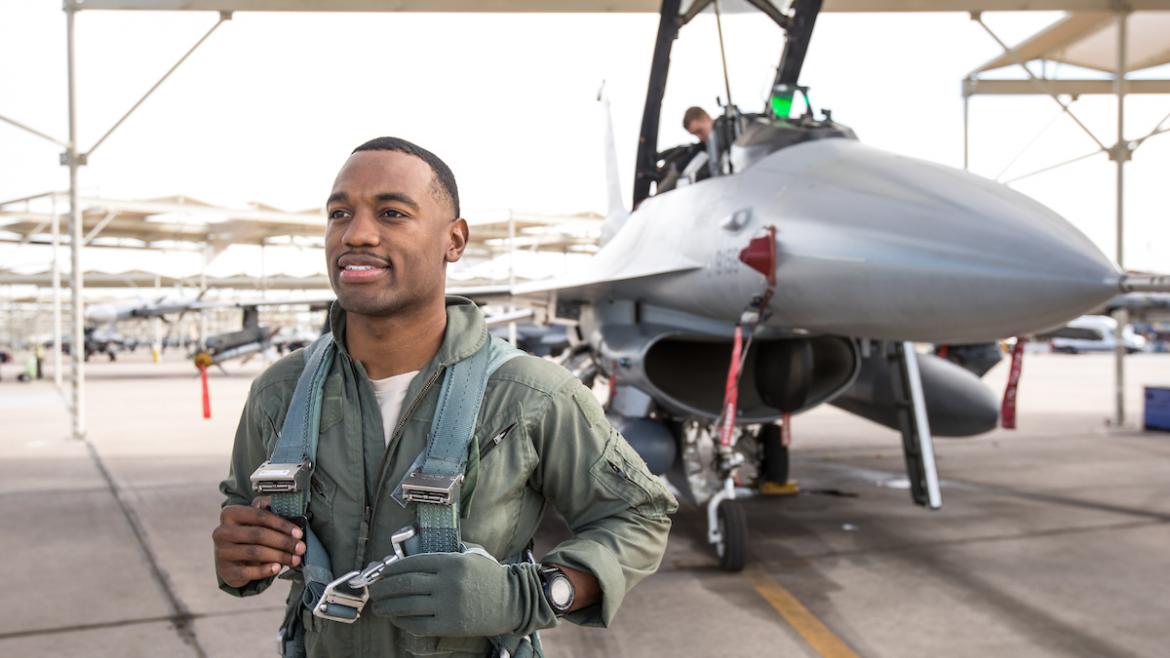 Arizona State University graduate student Anthony Lawrence recently got a taste of what his future life could be like when he strapped into the back seat of an F-16D Fighting Falcon at Luke Air Force Base in Glendale.

His Dec. 11 ride in a two-seat jet fighter used primarily for training student pilots marks the symbolic beginning of Lawrence’s path toward fulfilling his childhood dream of flying.

“The flight was amazing, from takeoff to landing,” Lawrence said. “It definitely exceeded my expectations of anything I could have dreamed of.”

The Georgia native’s passion for flying began around age 5 after a family trip to an air show, and it eventually led him to an aviation enrichment program at his local airport during high school, followed by four and a half years on active duty with the Air Force starting in 2011.

“I went to a few air shows growing up and then that really turned into hopefully one day becoming a fighter pilot,” Lawrence said. “So here I am.”

Lawrence, who transferred from an active-duty unit in California to a reserve squadron in Tucson, will have a chance at becoming a fighter pilot when he returns to active duty in January to attend Air Force Officer Training School, followed by flight school.

While at ASU, Lawrence received his private pilot’s license in 2016, played football for the Sun Devils as a walk-on that same year and earned his bachelor’s degree in interdisciplinary studies this past May. He was also an active member of the Pat Tillman Veterans Center outreach team and starred in an orientation welcome video with fellow veteran Marisa Von Holten.

“All of those things are something I am passionate about, and it kind of just came easy to me to put in the work because I knew it would pay off in the long run,” said Lawrence, who also credits the Tuskegee Airmen for inspiring him to fly. 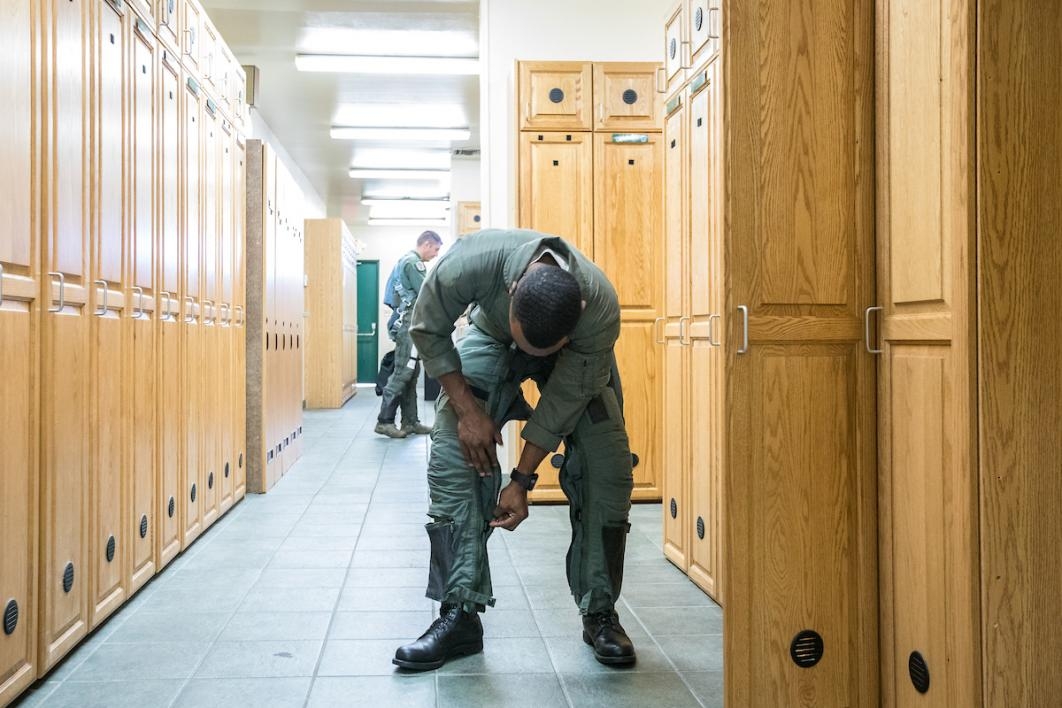 Anthony Lawrence puts on his compression G-suit prior to his first F-16 flight at Luke Air Force Base on Dec. 11. The ASU graduate student's dream since early childhood has been to pilot fighter jets. 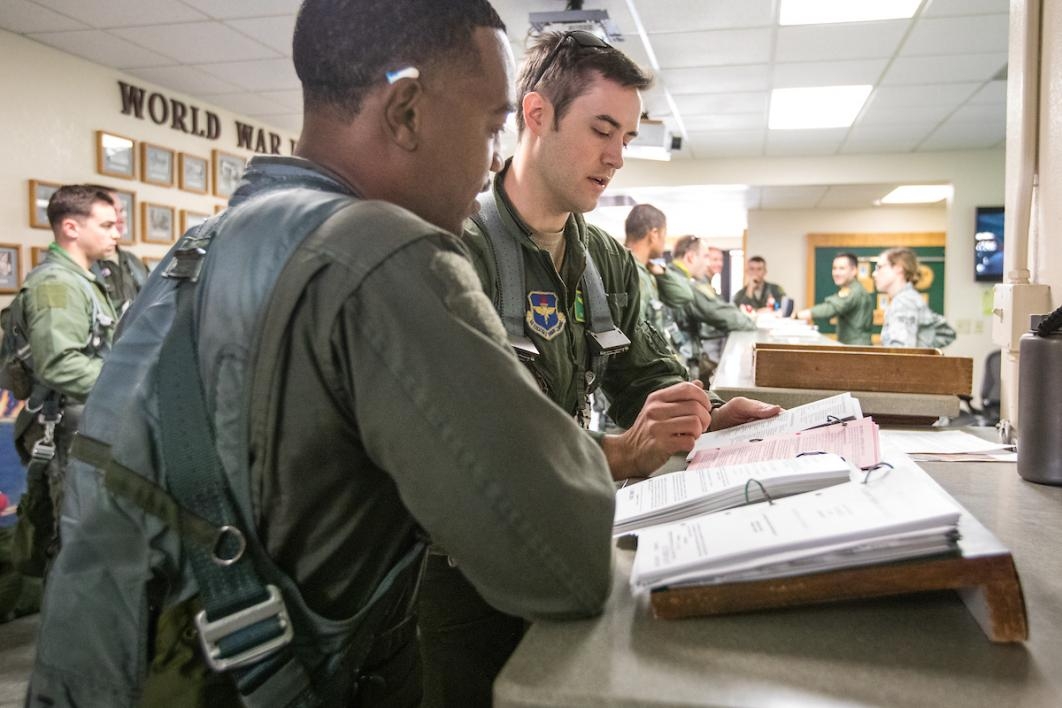 Capt. Daniel "Havoc" Hess goes over some of the flight manual with future 2nd Lt. Anthony Lawrence before their F-16 training mission flight at Luke Air Force Base on Dec. 11. 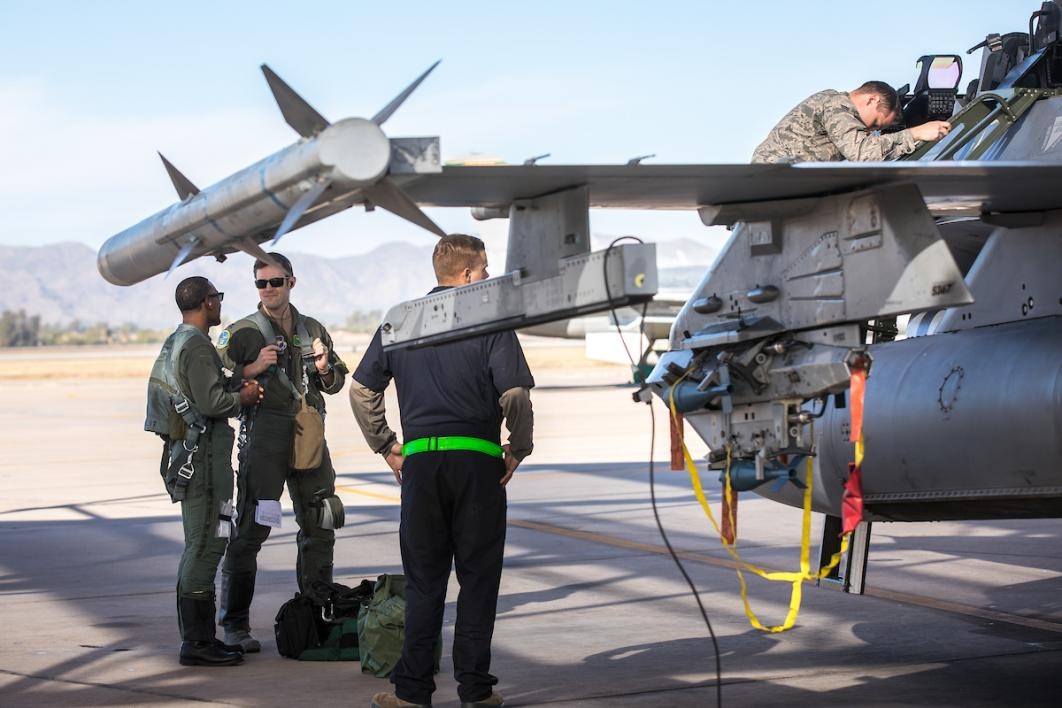 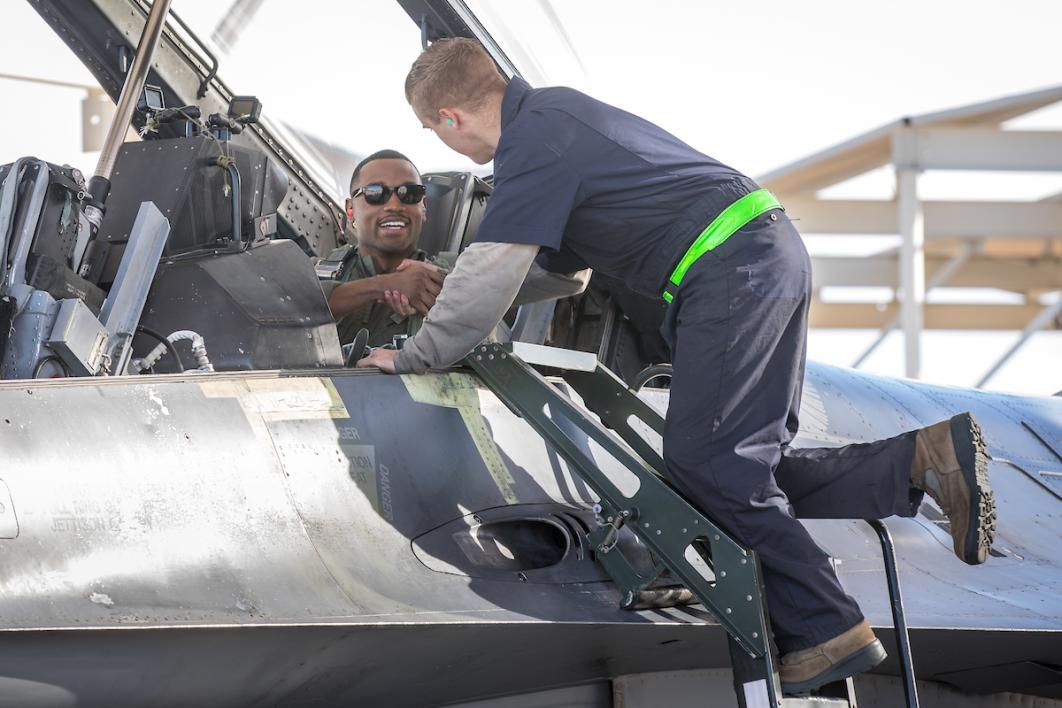 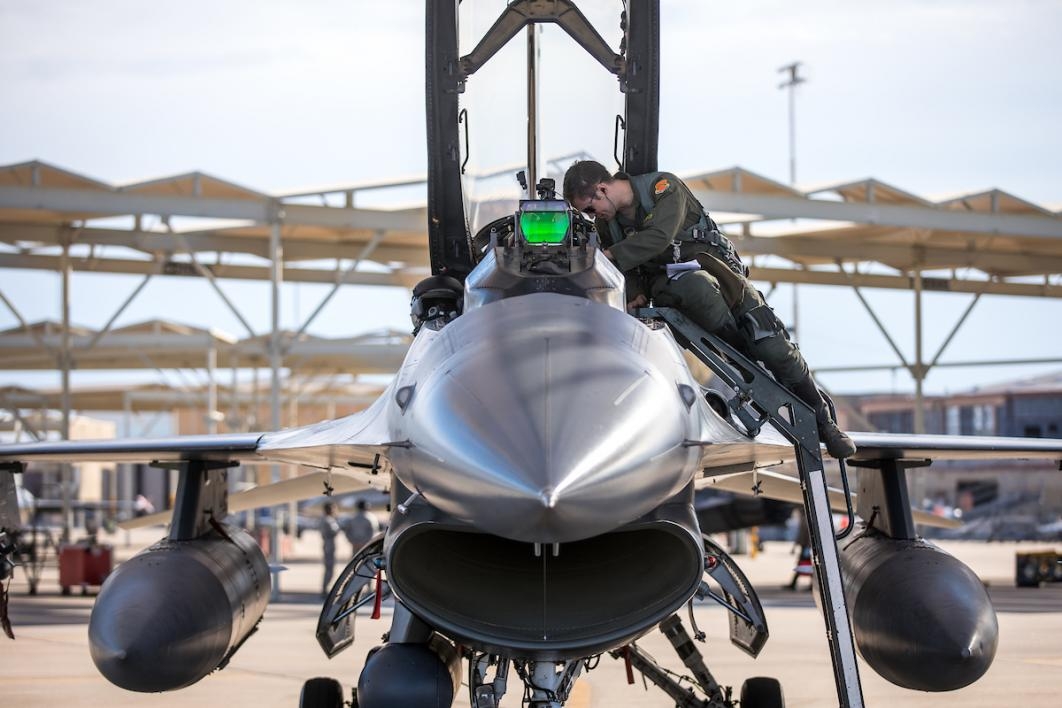 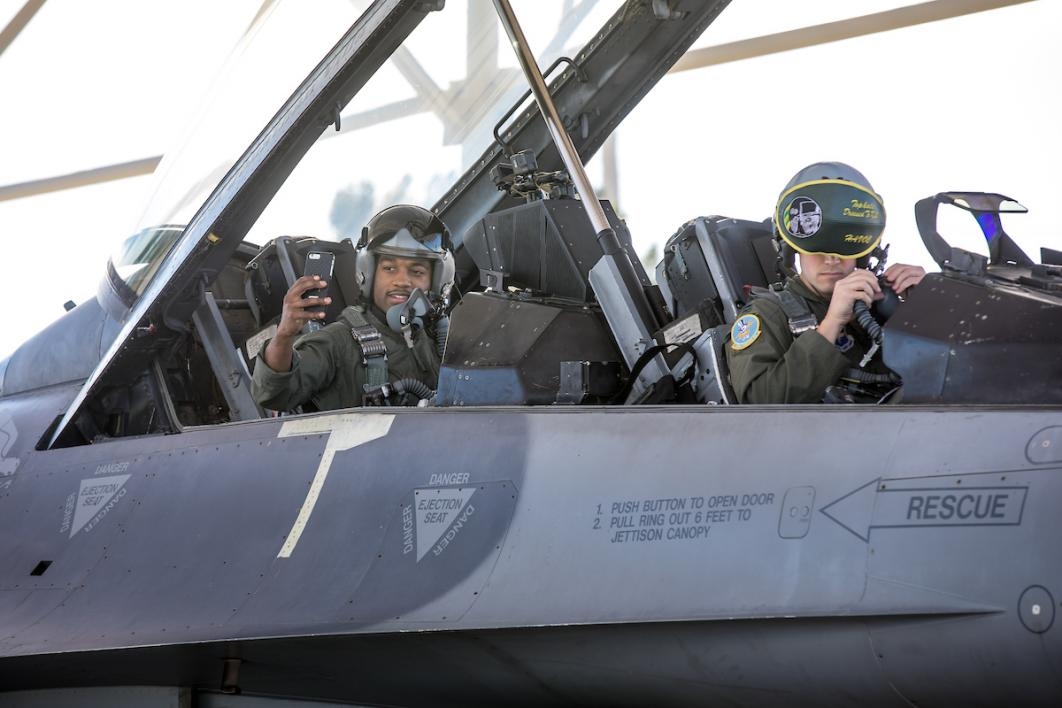 Anthony Lawrence (left) takes a quick video from the passenger seat of an F-16D, with Capt. Daniel "Havoc" Hess at the helm, at Luke Air Force Base. 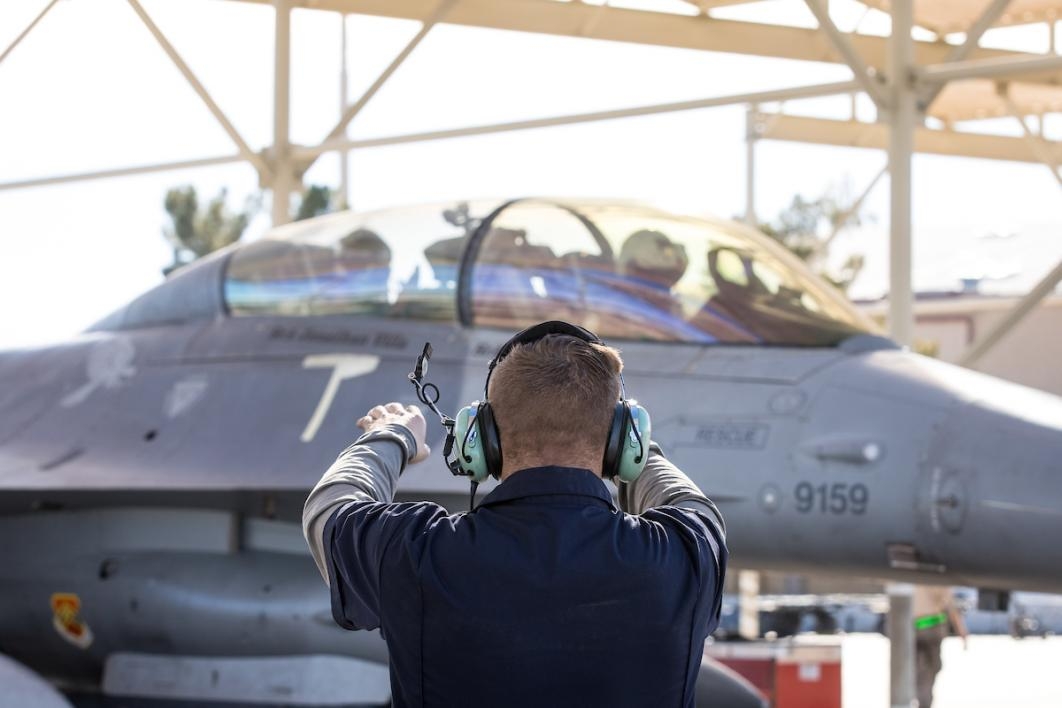 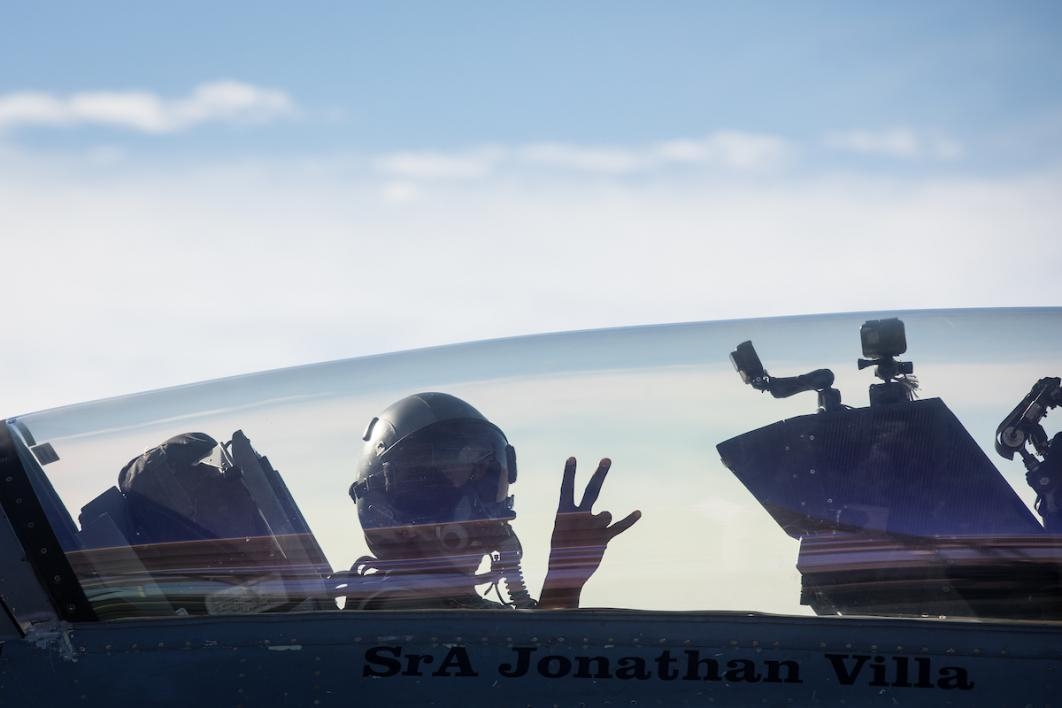 Anthony Lawrence flashes the pitchfork before takeoff at Luke Air Force Base on Dec. 11. 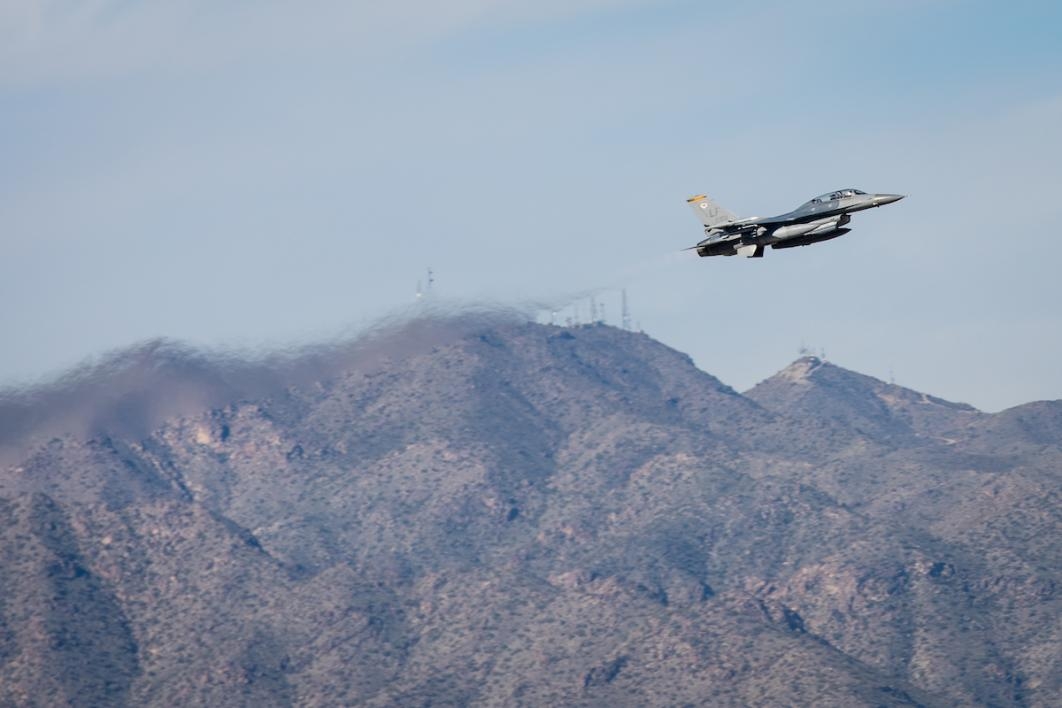 An F-16D piloted by Capt. Daniel "Havoc" Hess takes flight near the White Tank mountains near Luke Air Force Base. 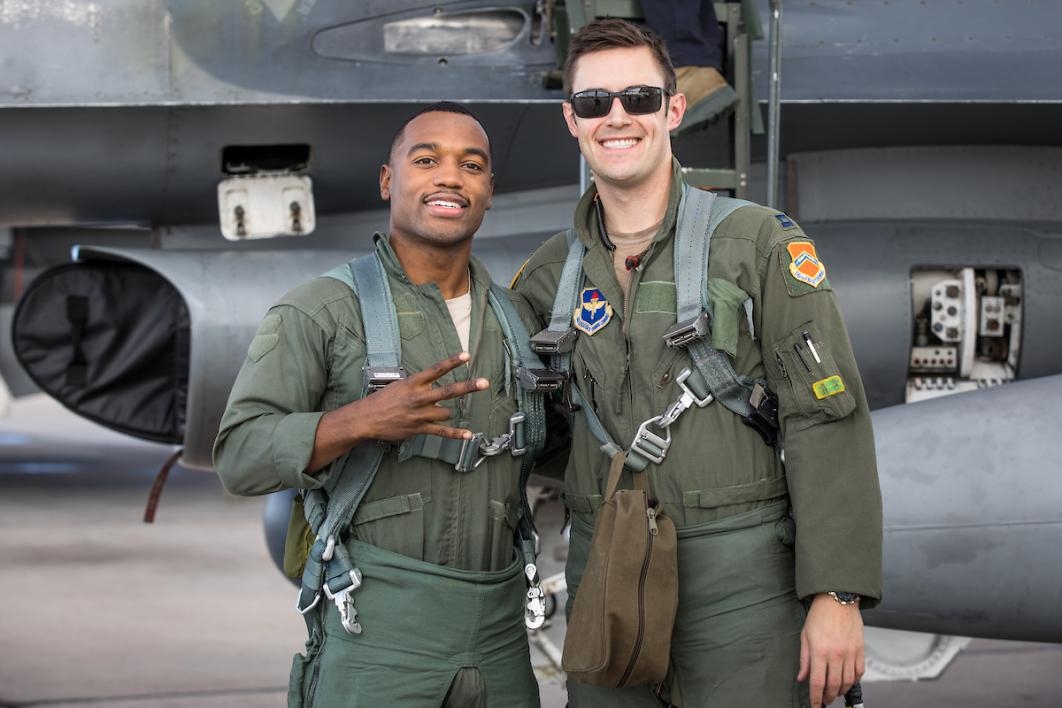 ASU alumnus Brig. Gen. Todd Canterbury, 56th Fighter Wing commander at Luke, met Lawrence during ASU’s Salute to Service week in November and subsequently invited him to fly, something the service does as part of the Air Force’s Orientation Flight Program.

“It really came through him, and I’m just eternally grateful for the opportunity to even be here,” Lawrence said after the flight. “An experience like this just gives you that carrot at the end of the road letting you know that this is the culmination of all the hard work that you’ve put in up until this point and beyond to try and work for.”

Currently, Lawrence is an ASU Online graduate student in the homeland security program with the Watts College of Public Service and Community Solutions.

“Through ASU, through networking, through the Pat Tillman Veterans Center and Luke Air Force Base, that’s how it’s all possible,” Lawrence said. “I’m definitely feeling inspired, more inspired than even before, knowing that the work ahead will lead to something like this in the future.”

No. 1 comes calling on Saturday night as Kansas (10-0) becomes just the second top-ranked team to play at Wells Fargo Arena. Tip time is 7 p.m. on ESPN2. ... No. 1 comes calling on Saturday night as Kansas (10-0) becomes just the second top-ranked team to play at Wells Fargo Arena. Tip time is 7 p.m. on ESPN2.