On board the delivery truck was precious cargo from Malin Space Science Systems, a test model of “Mastcam-Z,” the mast-mounted camera system for NASA’s Mars 2020 rover mission. 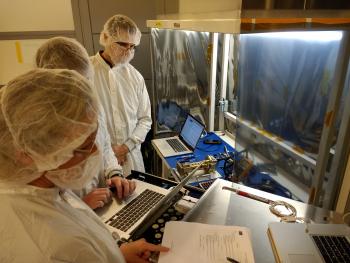 Mastcam-Z is being designed, built and tested under the direction of principal investigator Jim Bell, of ASU’s School of Earth and Space Exploration. The dual camera system can zoom in (hence the ‘Z’ in “’Mastcam-Z’), focus and take 3D pictures and panoramas at a variety of scales. This will allow the Mars 2020 rover to provide a detailed examination of both close and distant objects.

The test model that arrived on the Tempe campus in November, otherwise known as an engineering qualification model or EQM, is an important step in designing and building instruments for space. These models not only serve as a way to run the instruments through the rigors of launch and functionality in space, they also serve as a way for the instrument team to evaluate the design and testing plans before the final cameras are fully assembled.

The engineering model essentially allows the team to do a "dry run" through the complete design and build process of the instrument before the final versions of the cameras are complete.

“Parts may take longer to build than expected, a certain assembly step may be more difficult than initially thought or resources from third parties could become scarce on short notice,” Winhold said. “These are all things we can learn about and prepare for in advance using the engineering model.”

The team first verifies that the test instrument operates correctly in terms of parts, power consumption and software. They also use the model to ensure the instrument meets mission requirements in terms of functionality, size and weight. “For Mastcam-Z, one of the primary interests with the engineering model was evaluating the instrument’s ability to change focal length — or zoom,” Winhold said.

Specifically, the team tested the engineering model in the thermal vacuum chamber, located in ASU’s Interdisciplinary Science and Technology Building IV, to confirm that their support equipment was designed appropriately and allowed the camera to be placed securely in the chamber and view out the chamber's window clearly. They also timed the tests so they knew how long testing the actual cameras will take, and they tested the IT network's ability to share data quickly between people inside the cleanroom and other support team members outside of the room and around the world.

Winhold describes his role on the mission as similar to someone playing the game "Operation," where the patient is the Mastcam-Z cameras and the tweezers are the support pieces. 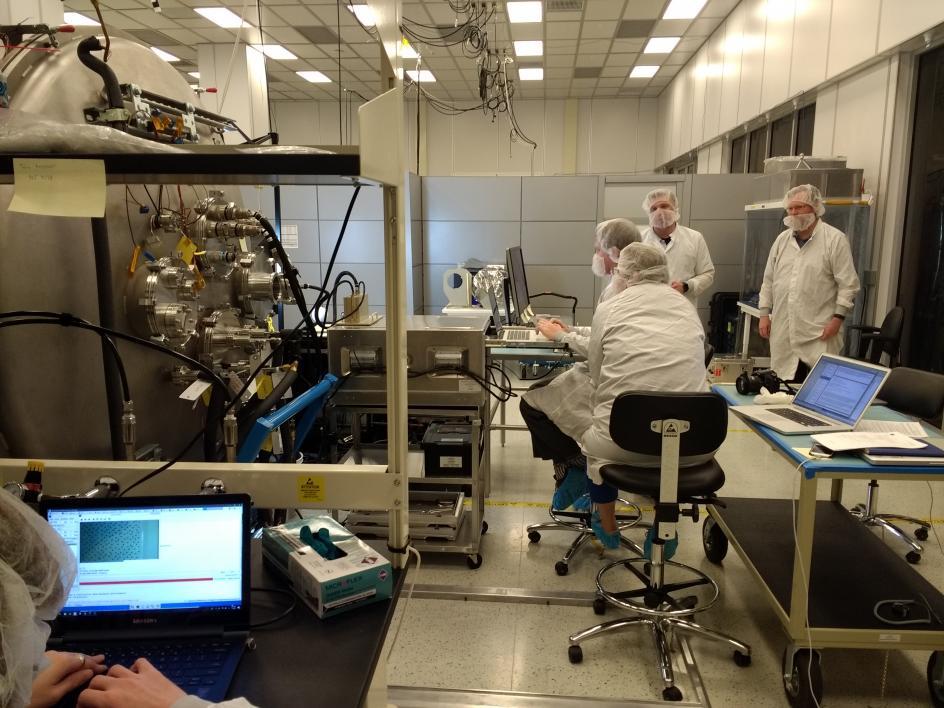 A calibration target used to assess the image quality of the cameras, consisting of geometric patterns, slanted edges, and lines very finely spaced apart to evaluate the camera's optics and their ability to accurately capture the resolution and contrast of the imaged scene onto the camera's image sensor. 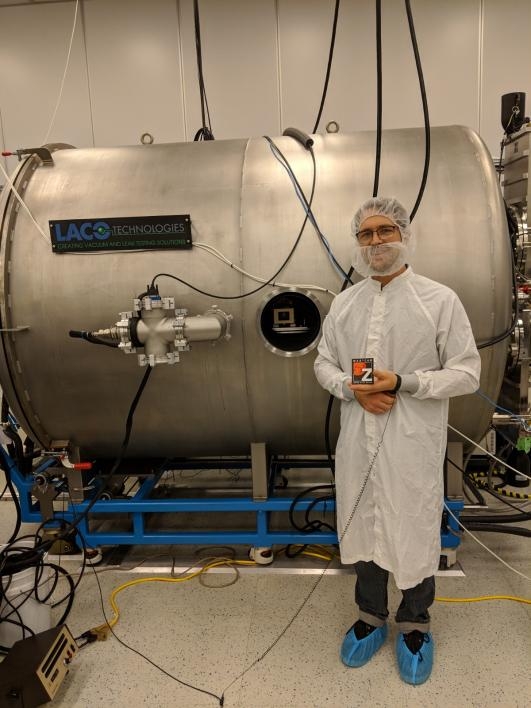 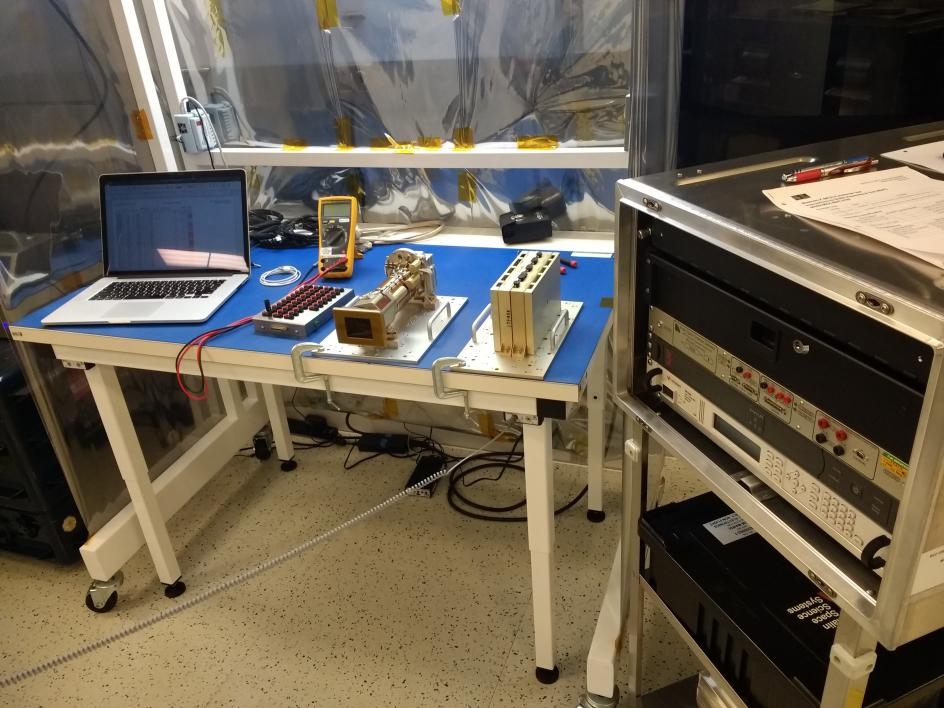 The engineering qualification model — a test model of Mastcam-Z, the mast-mounted camera system for NASA’s Mars 2020 rover mission — in the cleanroom of ISTB IV on the ASU Tempe campus.

“But in my case,” said Winhold, “I'm only shown pictures of the board game, and based on those pictures I need to design and create the best tweezers for removing ailments without hurting the patient.”

And according to the team, the testing has been a success so far.

“We had a few hiccups we worked around, like cables not being long enough, not understanding best communication procedures, that sort of thing; but nothing truly unexpected,” Winhold said. “That's exactly how we like things. In testing equipment that will be going to space, a boring day that goes according to procedure is a good one.”

Next steps for the Mastcam-Z team

In December, the actual Mastcam-Z flight cameras will arrive on the ASU Tempe campus for testing. They will then be delivered to NASA's Jet Propulsion Laboratory and installed on the Mars 2020 rover, which will launch in summer 2020, landing on Mars in February 2021. The mission is expected to last at least one Mars year (687 Earth days).

“The tests we ran on the engineering unit at ASU are almost identical to the tests we'll be running on the actual cameras when they arrive,” Winhold said.

Once the instrument is finalized and installed in the Mars 2020 rover, the engineering model continues to have a purpose.

“Largely it is considered a ‘flight spare’ and will be a back-up unit should something happen to the flight cameras before launch,” Winhold explained. “Once the rover launches in the summer of 2020 we won't be able to do any hands-on interaction with the flight cameras, though, so we’ll have the engineering model as a reference for possible problem solving and as a reference for subsequent rover missions.”

The cameras weigh about 8.8 pounds and will produce images of color quality similar to that of a consumer digital HD camera (2 megapixels). The cameras will help other Mars 2020 experiments on the rover by looking at the whole landscape and identifying rocks and soil (regolith) that deserve a closer look by other instruments. They will also spot important rocks for the rover to sample and cache on the surface of Mars, for eventual return (by a future mission) to Earth.

Mastcam-Z's purpose is to take high resolution panoramic color and 3D images of the Martian surface and features in the atmosphere with a zoom lens to magnify distant targets. It will be mounted on the Mars 2020 rover mast at the eye level of a 6-foot-5-inch person. The two cameras are separated by 9.5 inches to provide stereo vision. These cameras, with their all-seeing sharp vision, will provide images for science team members to pick out the best rocks, to hunt for evidence of past habitability recorded in the geology and texture of the landscape, and to look for signs of past water on Mars.

Mastcam-Z’s principal investigator is Professor Jim Bell of the School of Earth and Space Exploration. The deputy principal investigator is Dr. Justin Maki of NASA's Jet Propulsion Laboratory, the Planetary Society serves as the instrument’s education and public outreach partner, and the prime subcontractor for instrument development is Malin Space Science Systems, Inc.

The Mars 2020 rover mission is part of NASA's Mars Exploration Program, a long-term effort of robotic exploration of the Red Planet. The Mars 2020 mission addresses high-priority science goals for Mars exploration, including key questions about the potential for life on Mars. The mission also seeks to gather knowledge and to demonstrate technologies that address the challenges of future human expeditions to Mars. These include testing a method for producing oxygen from the Martian atmosphere, identifying other resources (such as subsurface water), improving landing techniques, and characterizing weather, dust, and other potential environmental conditions that could affect future astronauts living and working on Mars.

Editor’s note: This is part of a series of profiles for fall 2018 commencement. Read about more graduates. Katie Surma had accomplished a great deal before she got to Arizona State University's Sandra Day O'Connor College of Law. She graduated from the University of Pittsburgh, where she also played on the soccer team, then went on to the Duquesne University School of Law, where she got her J...

Katie Surma had accomplished a great deal before she got to Arizona State University's Sandra Day O'Connor College of Law. She graduated from the University of Pittsburgh, where she also played on the soccer team, then went on to the Duquesne University School of Law, where she got her Juris Doctor. Katie Surma, a soon to be Master of Laws (LLM) graduate from the Sandra Day O'Connor College of Law. Download Full Image

Majoring in the history of art and architecture as an undergrad helped spark her interest in law.

“Undergrad set the stage for law school, because it informed my understanding of injustice and inequality in the world and throughout human history,” she said. “Law school was attractive to me because I saw the law as a means to rectify those inequities.”

She joined the Eckert Seamans law firm after graduating from Duquesne, but remained interested in continuing her legal education.

“I value learning and development and have had a long-standing interest in rule of law and governance,” she said. “When I saw ASU’s LLM (Master of Laws) program, I knew it would be a great fit for me.”

And from there, she joined the International Rule of Law and Security program, which took her first to Washington, D.C., for a semester of study, and then Hong Kong.

“While in D.C., there is an opportunity to extern with a number of important institutions, and I had the good fortune of working for Center for Civilians in Conflict, which is an organization working to protect civilians in conflict zones,” she said. “I got to work with some pretty extraordinary individuals there and in Hong Kong. Over the past summer, I was very lucky to work for Dennis Kwok, a member of the Hong Kong Legislative Council representing the legal functional constituency.”

She was inspired by the work of Kwok and his team, who she said are vigorously defending the rule of law and Hong Kong’s semi-autonomy from China.

“Working outside of the U.S. gave me a fresh perspective on our political system and changed a lot of biases and assumptions I held toward U.S. political parties,” she said. “There are certain democratic core values that transcend party and that we as a country should stand for both at home and abroad. Going forward, I hope to continue doing work that defends and promotes those values.”

While continuing to work for her law firm, she hopes to also do work that advances rule of law, democracy and human rights, with a focus on Asia and, in particular, Hong Kong. And she says she can’t speak more highly of the International Rule of Law and Security program and its leadership.

“The program is engaging and pragmatic, and provides students with opportunities to gain real-world experience,” she said.