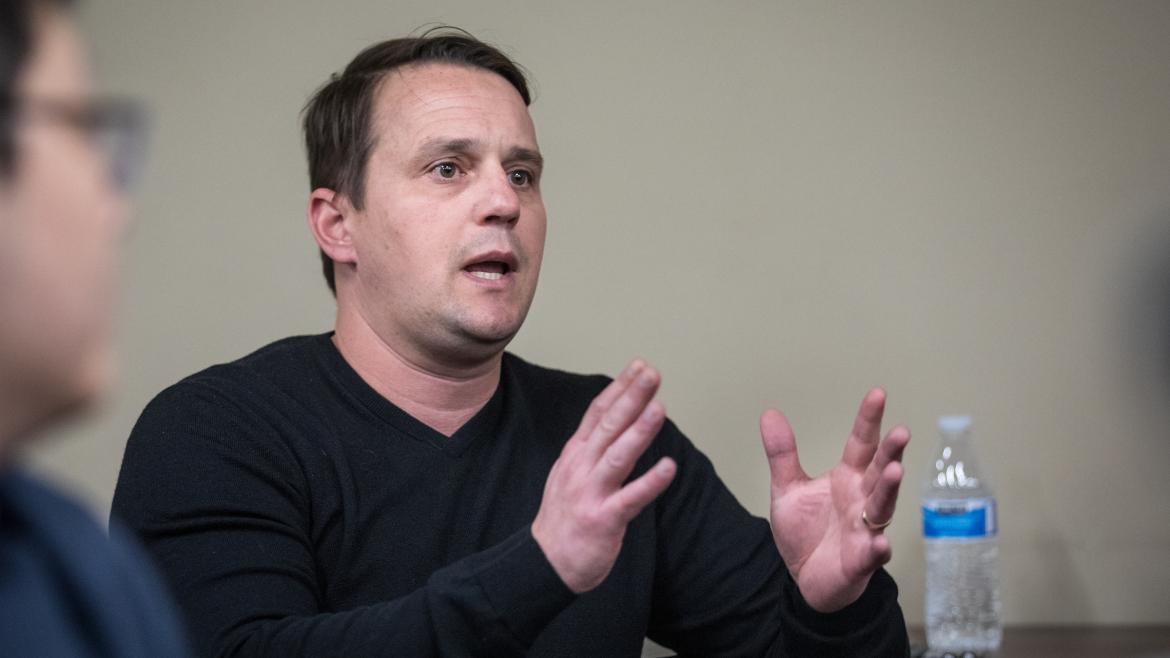 A new statewide survey of adolescents in Arizona finds alarmingly high rates of e-cigarette use as well as use of marijuana concentrates, and an Arizona State University professor who led the research believes that intervention should begin at younger ages.

The Arizona Youth Survey is administered to students in eighth, 10th and 12th grades every two years. The 2018 survey results were released Monday at a press conference held by the Arizona Criminal Justice Commission in Phoenix. This year’s survey included 48,000 students in all 15 counties and addressed drug use, violence and other risk factors.

The use of electronic cigarettes was up dramatically across all three age groups:

The e-cigarette devices are increasingly popular with young people because the nicotine is flavored, according to Sheila Polk, county attorney for Yavapai County and chairperson of the Arizona Criminal Justice Commission. 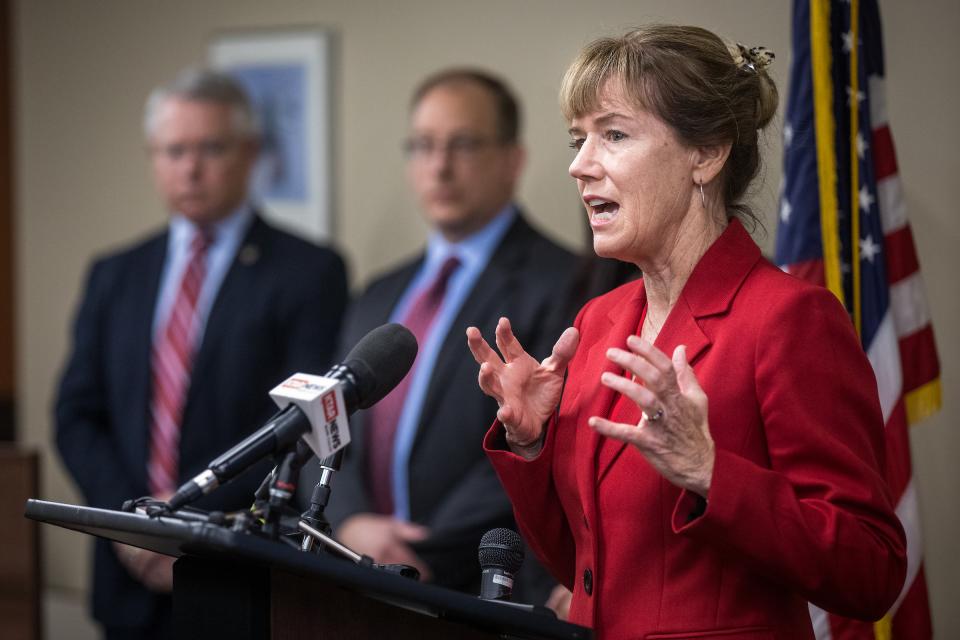 Yavapai County Attorney Sheila Polk said that progress in getting adolescents to stop smoking cigarettes is being undone by the e-cigarette industry. Photo by Charlie Leight/ASU Now

“What’s alarming is that decades of progress in getting our kids to stop using cigarettes has been undone in two short years with the e-cigarette industry,” Polk said.

The U.S. Food and Drug Administration has targeted the e-cigarette industry’s marketing to young people, in part because the agency estimates that about 5 percent of adolescents using e-cigarettes are actually using the devices to inhale marijuana concentrate.

This is the first year the Arizona Youth Survey asked about marijuana concentrate use, according to Dustin Pardini, an associate professor in the School of Criminology and Criminal Justice in the Watts College of Public Service and Community Solutions. His research team helped design the survey, collected and cleaned the data and generated the school-level reports.

“This is the largest study that’s ever looked at the prevalence of use of concentrated marijuana,” said Pardini, who is working with Madeline Meier, an assistant professor of psychology at ASU, to drill down further into the data and publish the results.

Marijuana concentrate is a highly distilled mass of THCTetrahydrocannabinol is the main psychoactive ingredient in cannabis. that can be consumed in e-cigarette devices and in other ways, such as edibles.

Meier said that the vaping devices can look like thumb drives yet be filled with marijuana concentrate and used without detection because there’s no distinctive odor.

“So we get kids who are using not only nicotine in school but also using cannabis in class,” she said.

This is concerning because the amount of THC in concentrates is much higher than in the flower-bud marijuana that is typically smoked, according to Bill Montgomery, county attorney for Maricopa County.

“Some of the perceptions of marijuana use that even voters are familiar with are the types of THC concentration in the 3 percent level we used to see in the 1980s to the early 90s, whereas today, you can have commercial-grade marijuana sold in dispensaries that is upward of 30 and 35 percent THC, and with concentrates, THC can be 90 percent in some formulations,” he said.

Because medical marijuana is legal, young people are perceiving marijuana as a medicine, not an illegal substance, Montgomery said.

The survey showed that more than 80 percent of students believed that people are at “moderate or great risk of harm” if they smoke one or more packs of cigarettes a day, have five or more alcoholic drinks at once, use prescription drugs without a prescription or use illegal drugs besides marijuana.

But nearly 40 percent of the young people felt that there was “no risk” in trying marijuana.

“So you have a perception of a product that is inconsistent with its true impact and how it’s being manufactured,” Montgomery said.

Pardini said he is further analyzing the data to see if there are differences in risk factors or attitudes between young people who use concentrates and those that use traditional marijuana.

Another issue he’s studying has to do with the side effects of concentrate use, such as extreme levels of paranoia, anxiety and panic attacks, which may linger.

“For a smaller portion of kids, there’s some evidence to suggest that it can trigger a predisposition to schizophrenia,” he said.

Alcohol was by far the most commonly reported substance used, with 45 percent of students reporting drinking alcoholFor 2018, 31 percent of eighth-graders drank alcohol, 47 percent of 10th-graders and nearly 60 percent of 12th-graders. in their lifetime. The rates showed a slight increase from two years ago, but were slightly less than in 2014 for all three grade levels.

The next most common substance reported was e-cigarettes, with 37 percent reported using. This was followed by typical marijuana (about 30 percent), marijuana concentrate (23.5 percent), regular cigarettes (17 percent), multiple drug use (12 percent), prescription pain relievers, such as OxyContin (9 percent), and over-the-counter drugs, such as cough syrup (6 percent). All other substances (cocaine, hallucinogens, inhalants, methamphetamine, heroin, ecstasy, steroids, prescription stimulants and synthetic drugs) has usage rates of less than 5 percent among all students surveyed.

“If anything, I think, this would be an underestimate on my mind of the level of substance use,” Pardini said. “Because the kids who are smoking weed all the time aren’t going to school.”

The survey also measured risk factors and found 33 percent overall to have at least eight risk factors, such as academic failure, rebelliousness, friends’ use of drugs, gang involvement and others.

Ten percent of students said they had seen someone shot, shot at or threatened with a gun at least once in the past year.

This year, for the first time, the survey asked if students had been “punched, kicked, choked or beaten up” at least once in the past year, and nearly 27 percent of the eighth-graders reported that they had.

In good news, the survey found big decreases in all three age groups of students reporting that they had been in a car driven by someone who had been drinking alcohol. For 12th-graders, the rate was nearly 22 percent in 2014 and half that this year.

The Arizona Youth Survey results are important, according to Maria Christina Fuentes, director of the Governor’s Office of Youth, Faith and Family.

“To see what’s working, we have to know how youth perceive drug use and substance abuse and how that perception is shaped,” she said. “These survey results have a direct impact on how funding is awarded to specific programs and initiatives.”

The officials at the press conference noted that 57 percent of the students reported never having a conversation with their parents about using drugs. Fuentes said her office addresses that with its “Overcome Awkward” initiative to teach parents how to talk to their kids.

Pardini said that drug-prevention programs should start in elementary school because substance use typically begins around age 12.

“Getting the message about appropriate behavior is critical because by the time you’re in 12th grade, talking to your parents is not going to matter very much,” he said.

Prevention should be two-pronged he said, with one program for all students and another targeted to students particularly at risk.

“We know that kids with conduct problems such as physical fighting, being oppositional, defiant, are at the highest risk for abusing substances later on,” he said.

Pardini said that researchers at ASU have developed empirically based programs that have been shown to prevent and reduce substance use: The BRIDGES Program increases school engagement and keep teens on a positive path; The Family Check-Up model promotes family management and addresses child and adolescent adjustment problems; and “Keepin’ it REAL” is a culturally grounded curriculum for grades six through nine.

“These programs have been implemented in Arizona on a relatively small scale and could be disseminated more broadly with sufficient funding and support,” he said.

Top photo: Dustin Pardini, an associate professor in the School of Criminology and Criminal Justice in the Watts College of Public Service and Community Solutions, worked with his research team to design the Arizona Youth Survey, collect the data and generat school-level reports. Photo by Charlie Leight/ASU Now