Everyone who launches a startup dreams of the big payoff, but it all begins with a way to make life better. And for many entrepreneurs in the Arizona State University community, that journey is personal.

A man who has dealt with stuttering his entire life created a software platform that could radically change the way speech therapists work. A student who could never find a swimsuit to fit her curvy figure started a new brand. A painful ankle break sustained in a dirt-bike crash prompted a team to develop a more efficient physical-therapy machine.

They were among dozens of ASU-affiliated startups that won nearly $200,000 in investment funding at the Demo Day entrepreneurship competition on Friday. The projects are part of Venture Devils, a program in the Office of Entrepreneurship + Innovation at ASU that provides space, mentorship and access to funding to ASU students, faculty, staff or community members. More than 90 ASU-affiliated teams pitched their ventures to a panel of judges at the daylong event, held at SkySong in Scottsdale. There were 10 funding competitions, with some teams winning in more than one.

Some of the startups want to improve the way therapists can help people. 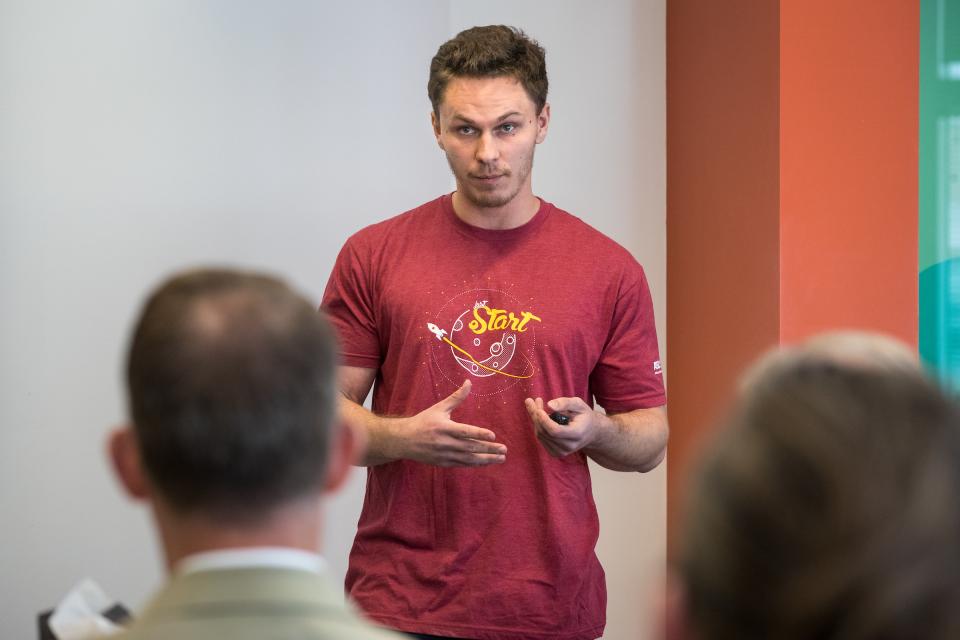 ASU grad student Ilya Skolkov and alumnus Patrick Kennedy won $10,000 for Audiolex, a specialized microphone and software system that analyzes speech. Currently, therapists record patients’ speech and then manually transcribe the results in a special phonetic system, which takes about 90 minutes and is about 70 percent accurate. Audiolex uses artificial intelligence algorithms to reduce the time and increase accuracy to 90 percent, said Skolkov, who has dealt with stuttering his entire life.

“Speech pathologists are paid case by case, so they can now have better treatment and treat more patients,” said Skolkov, who is pursuing a master’s degree in business analytics. He estimates that Audiolex will save pathologists 480 hours per year.

The team is running a clinical trial on Audiolex and hopes to bring it market in 2020. Luis Castillo, who is graduating with a degree in mechanical engineering this month, partnered with Garrett Murphy, who invented the Murphy Mobility Device after healing improperly from a broken ankle.

“My experience through physical therapy led to my passion to help people with this injury and the development of this device,” said Murphy, who previously won the Poder competition and then joined with Castillo.

The device allows patients to perform a traditional physical therapy exercise at home, without supervision from a therapist. A sensor measures range of motion in the patient and stores the information in the cloud, where therapists can access it and modify the routine.

Murphy Mobility Device won $6,000 total in the competition, including $1,000 from the Global Sport Institute at ASU, and Castillo also won $1,000 for his other startup, Speedy Castillo, a removable rim cover that improves bicycle aerodynamics.

Two recent MBA graduates realized they could launch a startup to not only address a need but to boost other businesses. Knot-ed offers a monthly beauty box subscription for black women. Drawing from black-owned businesses, each Knot-Box contains enough products, tools and accessories for women to create three new hairstyles for less than $40.

“A new hairstyle can make you feel like you rule the world,” said Leandres Christopher, who formed Knot-ed with Ambra Jordan in April, a month before they both received their MBAs at ASU.

“For black women, it’s a bit more complicated,” Christopher said, noting that beauty-supply retailers typically devote only a small portion of store space to products for black women, despite the fact that black women spend nine times more on hair and beauty than any other demographic.

“The buying power is there but American retail has foolishly ignored this audience,” she told the judges. Other subscription beauty boxes for black women are product-based and don’t include accessories or tutorials by natural-hair influencers. Christopher said the timing is right for their idea because black women are increasingly foregoing hair-straightening chemicals in favor of natural styles. For many of the winners at Demo Day, a few thousand dollars can be sufficient to advance them to the next level. Demi George won $6,000, which will be enough for her to produce samples for her venture, Hourglass Swimwear, a line of swimsuits for curvy bodies.

“I always had confidence issues because I couldn’t find anything that fit,” said George, who pitched Hourglass Swimwear for only the second time at Demo Day. She is a senior majoring in broadcast journalism.

“I came up with a new size invention for in-between sizes that is for a pear, an apple, if you’re top heavy, bottom heavy, an hourglass,” she said. “This funding will complete my samples to bring to my retailers, who are so interested in this product.”

Some of the winners are nonprofit ventures. Direct Aid for Homeless was founded by Michelle Patterson, an undergraduate majoring in social work who has worked on the streets with people who are unsheltered since she was 16 years old.

“A lot of the individuals are just down on their luck and need someone to be there and remind them that they’re people and life doesn’t have to be like that and there are services out there,” said Patterson, who won $1,000 to develop a website. 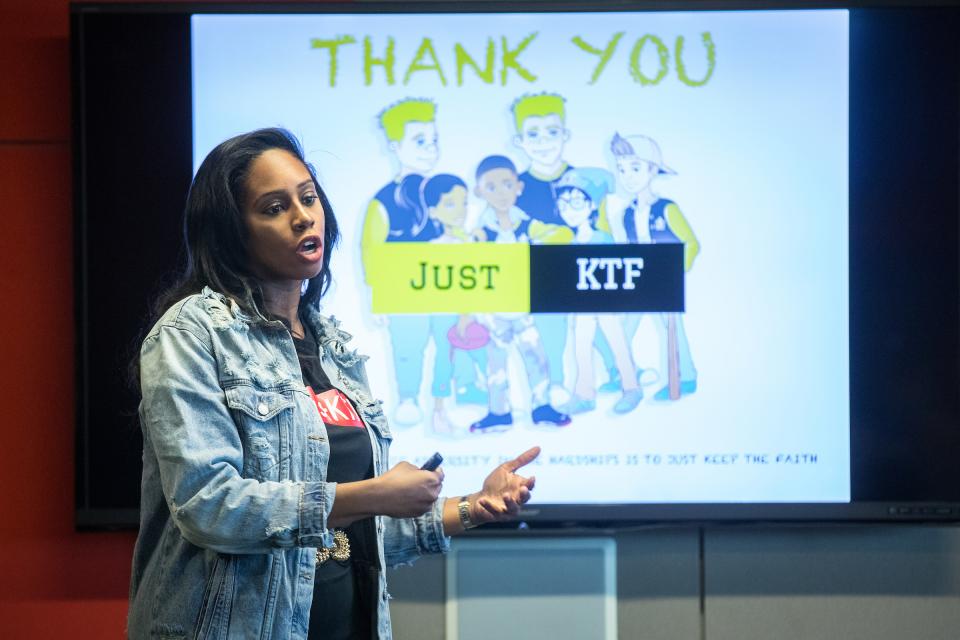 Cecile Shell, a student in the Sandra Day O'Connor College of Law, is working to start an athlete-development nonprofit called Keep the F.A.I.T.H. She won $1,000 from the Global Sport Institute Venture Challenge at Demo Day. Photo by Charlie Leight/ASU Now

Keep the F.A.I.T.H. is a program to teach life skills to young athletes through a curriculum that can be offered by schools. Founded by Cecile Shell, a student in the Sandra Day O’Connor College of Law, the venture won $1,000.

“We’ll focus not just on academics, but we’ll implement financial literacy and identity development,” Shell said. “We want you to know that you have more to offer society.”

Some of the winners have been at work on their ventures for years and have already won tens of thousands of dollars in previous competitions. Hoolest Performance Technologies, which makes an earbud device to block anxiety by stimulating the vagus nerve, won $15,000. The idea was invented by Nicholas Hool, a biomedical engineering graduate student who suffered from performance anxiety while he was a nationally competitive golfer in high school.

Many of the winners are now finalists in their competitions, challenged with growing their ventures and competing for grand prizes at the next Demo Day in April.

“At Entrepreneurship and Innovation, we decided to put ourselves in your shoes,” said Ji Mi Choi, associate vice president in the Office of Knowledge Enterprise Development at ASU.

“If we are going to ask you to refine your product, understand your market, talk to your customers, understand where you’re creating value, go out and pitch for your money and hustle every single day for your startups, then we needed to put our money and our feet where you are.”

Choi said that the entrepreneurship support team at ASU has brought in $27 million in external funding, drawing $17 million of that just in the last six months.

“This self-efficacy, that you can actually take an idea and start a company and hire people and bring in revenue and have an impact in your community, is such a significant empowerment,” she said.

“That’s what we’re trying to bring to as many people at ASU as possible.”

A triple-double just a few days of coming up one assist short earned Zylan Cheatham the Pac-12 Player of the Week honor. ... A triple-double just a few days of coming up one assist short earned Zylan Cheatham the Pac-12 Player of the Week honor.