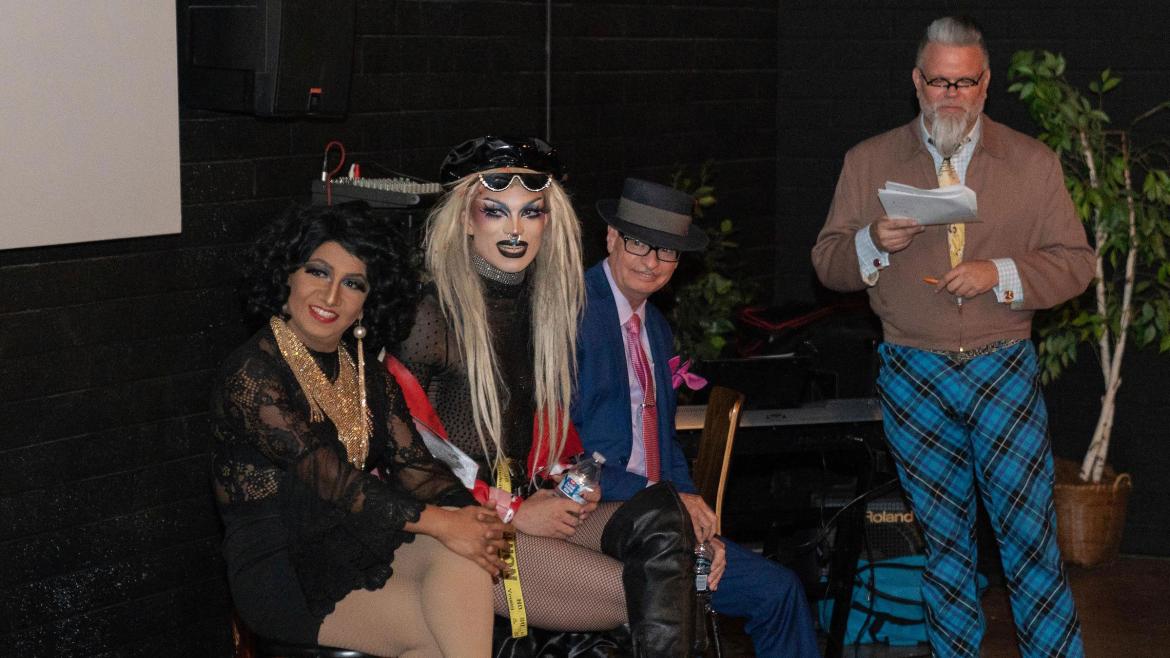 Forget everything you thought you knew about drag.

“It’s not (about) gender. Drag is everything; whatever you can imagine,” said local Valley drag performer Miss X on Thursday night at an event hosted by ASU’s Project Humanities, an initiative created to bring people together to listen, talk and connect.

“Dispelling the Myths: Drag Kings and Drag Queens,” half drag show, half question-and-answer session, took place at FilmBar in downtown Phoenix as part of the initiative’s 2018 season of events focused on revealing the truths behind the myths and stereotypes that surround such topics as death, PTSD and religion.

“We like going into spaces where people don’t often go, not for shock value but to think differently about topics that are less commonly talked about,” said Neal Lester, ASU English professor and director of Project Humanities.

While the success of shows like "RuPaul’s Drag Race" and a general lack of knowledge about the history and realities behind drag culture have led many to believe that it’s all about men in dresses, the performers at Thursday’s event begged to differ.

Drag, it turns out, is nothing new. There’s evidence of male drag performance as far back as the ancient Greeks, extending from Japanese Kabuki theater to Shakespearian plays, where all the roles were played by men. Less attention has been paid, though, to women dressing as men, and more recently, transgender individuals dressing in personas that defy gender norms.

“Transgender people are like unicorns,” said Mia Inez Adams, who danced and lip-synched to Whitney Houston before the evening’s discussion. A transgender woman who has made a career of performing drag across the country for 37 years, Inez Adams bemoaned the lack of recognition of trans performers in the industry.

“We don’t fit in with gay men or gay women,” she said. “We are sometimes shunned from clubs.”

Next Tuesday, Nov. 20, marks the international Transgender Day of Remembrance. Eddie Broadway, a transgender man and drag performer who works at a psychiatric hospital, noted that it’s a good time to think about the next generation of LGBT youth who are often victims of violence — either outward or self-inflicted.

“I continue to do this for all the youth who are scared or who feel they’re not worthy,” he said. “I do it for them. And I think a lot of us do it for them.”

Melissa, who also goes by Dagoberto Bailon, agreed. An advocate of undocumented queer youth, she performs drag solely to fundraise for initiatives that work to give that underrepresented population voice and a sense of community.

“For me, it’s about opening up conversations about gender identity … (as well as things like) immigration and LGBT rights,” she said.

Social media has also provided a space for the LGBT community and drag performers to connect and feel empowered.

Inez Adams recalled when she first began performing drag, not long after the Stonewall riots served as a catalyst to bring the gay rights movement to the forefront in America. Back then, she said, you could still get arrested for dressing in drag.

Nowadays, she said, through the magic of social media, “(members of the community) can see a collective of people around the country who do the same thing.”

Lester closed out the evening with a brief message about the significance of having open, honest conversations about so-called “taboo” subjects in our communities.

“A lot of people will walk out of here tonight and say, ‘I’m really confused,’” he said. “And that’s OK, because that’s an opportunity to educate yourself, and talk to somebody and learn.” 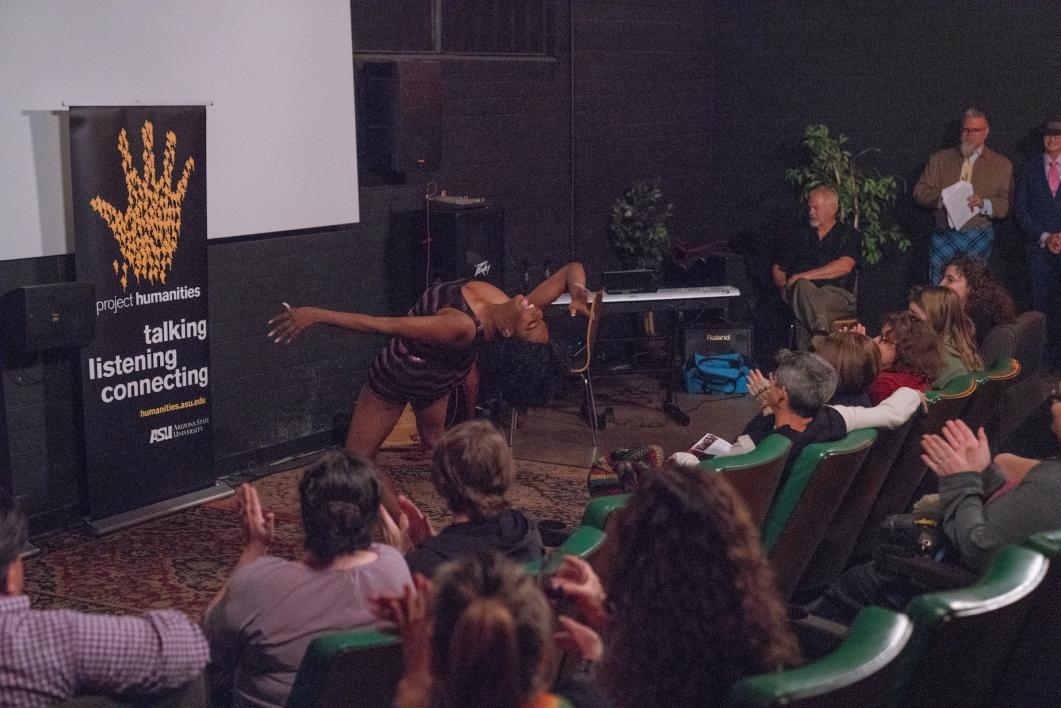 Mia Inez Adams dances and lip-synchs to Whitney Houston before the evening’s discussion Thursday at FilmBar. A transgender woman who has made a career of performing drag across the country for 37 years, Inez Adams bemoaned the lack of recognition of trans performers in the industry. “We don’t fit in with gay men or gay women,” she said. “We are sometimes shunned from clubs.” 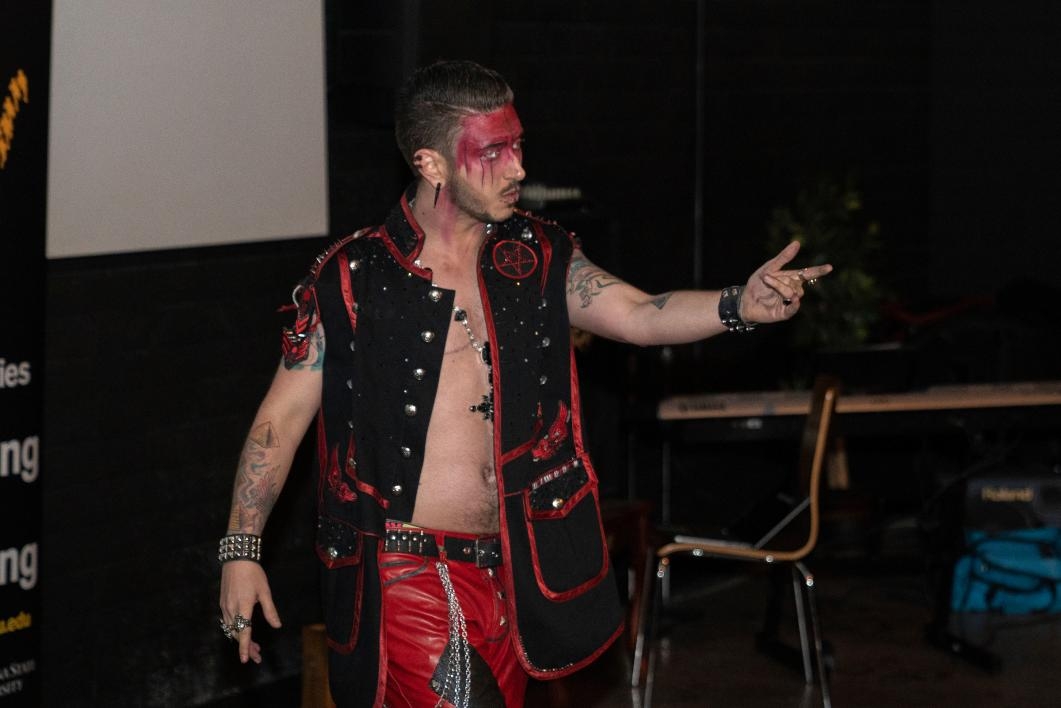 Eddie Broadway performs at the ASU Project Humanities event. Broadway, a transgender man and drag performer who works at a psychiatric hospital, noted that Nov. 20, the Transgender Day of Remembrance, is a good time to think about the next generation of LGBT youth who are often victims of violence — either outward or self-inflicted. 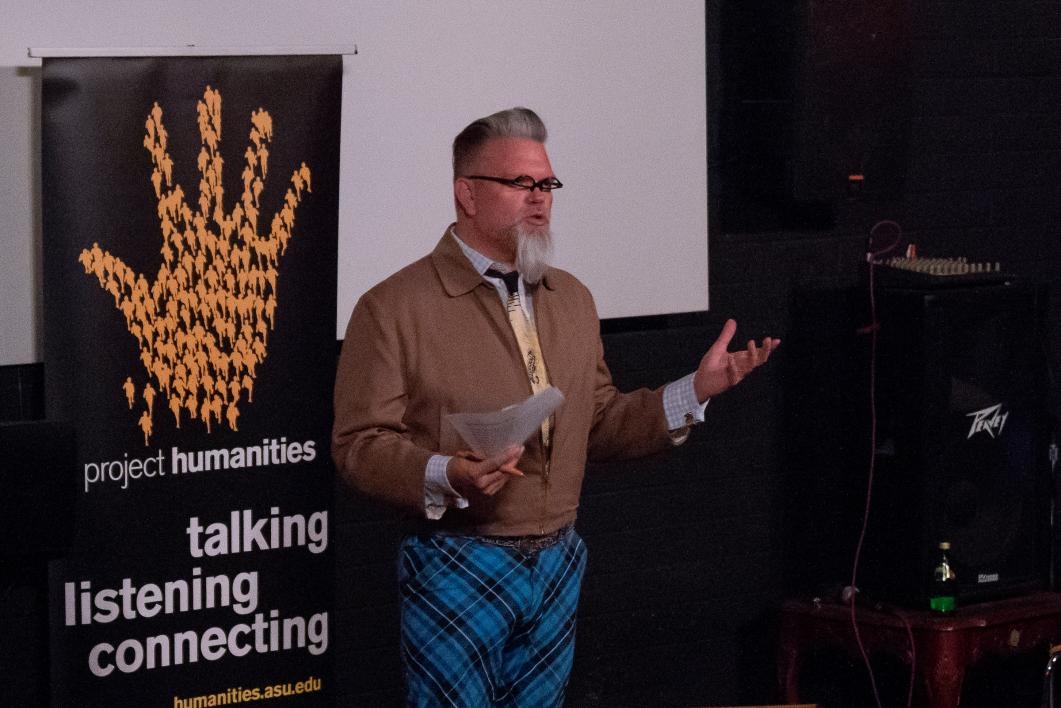 Top photo: (From left) Melissa, Austrid Aurelia and Miss X answer questions about their experiences as drag kings and queens living and working in the Phoenix area during the ASU Project Humanities event "Dispelling Myths: Drag Kings and Drag Queens," at the Film Bar in downtown Phoenix. Historian Marshall Shore (right) was the event facilitator. Photo by Marcus Chormicle/ASU Now